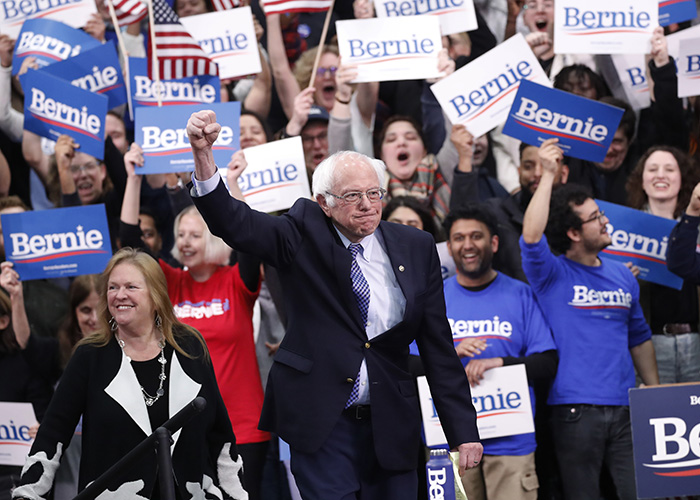 Sen. Bernie Sanders (I-VT) told campaign staff that he is suspending his campaign for president. I am thanking him for finally making that decision so that the party can unite to defeat Donald Trump. I am also thanking him for his efforts in moving the party back to more liberal ideals.

I did not agree with him on everything, but I valued his role in our politics: an anchor on the left to keep the Overton Window moving too far to the right. His presence in the 2016 and 2020 presidential primary races made every candidate more progressive. It made every policy and every platform more progressive. He has that to be proud of.

Here is the statement from Vice President Biden:

Today, Senator Sanders announced he was suspending his campaign. Bernie has put his heart and soul into not only running for President, but for the causes and issues he has been dedicated to his whole life. So, I know how hard a decision this was for him to make — and how hard it is for the millions of his supporters — especially younger voters — who have been inspired and energized and brought into politics by the progressive agenda he has championed. Bernie has done something rare in politics. He hasn’t just run a political campaign; he’s created a movement. And make no mistake about it, I believe it’s a movement that is as powerful today as it was yesterday. That’s a good thing for our nation and our future.

Senator Sanders and his supporters have changed the dialogue in America. Issues which had been given little attention — or little hope of ever passing — are now at the center of the political debate. Income inequality, universal health care, climate change, free college, relieving students from the crushing debt of student loans. These are just a few of the issues Bernie and his supporters have given life to. And while Bernie and I may not agree on how we might get there, we agree on the ultimate goal for these issues and many more.

But more than any one issue or set of issues, I want to commend Bernie for being a powerful voice for a fairer and more just America. It’s voices like Bernie’s that refuse to allow us to just accept what is — that refuse to accept we can’t change what’s wrong in our nation — that refuse to accept the health and well-being of our fellow citizens and our planet isn’t our responsibility too. Bernie gets a lot of credit for his passionate advocacy for the issues he cares about. But he doesn’t get enough credit for being a voice that forces us all to take a hard look in the mirror and ask if we’ve done enough.

While the Sanders campaign has been suspended — its impact on this election and on elections to come is far from over. We will address the existential crisis of climate change. We will confront income inequality in our nation. We will make sure healthcare is affordable and accessible to every American. We will make education at our public colleges and universities free. We will ease the burden of student debt. And, most important of all, we will defeat Donald Trump.

At this moment, we are in the middle of an unprecedented crisis in American history. There is enormous fear and pain and loss being felt all across the country. There are also untold stories of heroism — of nurses and health care workers and doctors and first responders and grocery store workers and truck drivers and so many others on the front lines of this crisis. Putting their own lives in danger for the rest of us. If we didn’t know it before, we know it now: This is the backbone of our nation.

Our first job is to get through the immediate crisis threatening the public health and getting into the pockets of America’s workers. But we also need to take a hard look at what we need to fix and change in this country. Many of the biggest cracks in the social safety net have been laid bare — from health care to paid sick leave to a more extensive and comprehensive system of unemployment benefits. We will need to address these. Just as we need to address rebuilding our nation’s infrastructure. And we all know — the clock is ticking — we don’t have a moment to waste in combating the climate crisis.

As friends, Jill and I want to say to Bernie and Jane, we know how hard this is. You have put the interest of the nation — and the need to defeat Donald Trump — above all else. And for that Jill and I are grateful. But we also want you to know: I’ll be reaching out to you. You will be heard by me. As you say: Not me, Us.

And to your supporters I make the same commitment: I see you, I hear you, and I understand the urgency of what it is we have to get done in this country. I hope you will join us. You are more than welcome. You’re needed.

Together we will defeat Donald Trump. And when we do that, we’ll not only do the hard work of rebuilding this nation — we’ll transform it.

2 comments on “Thank you Bernie”