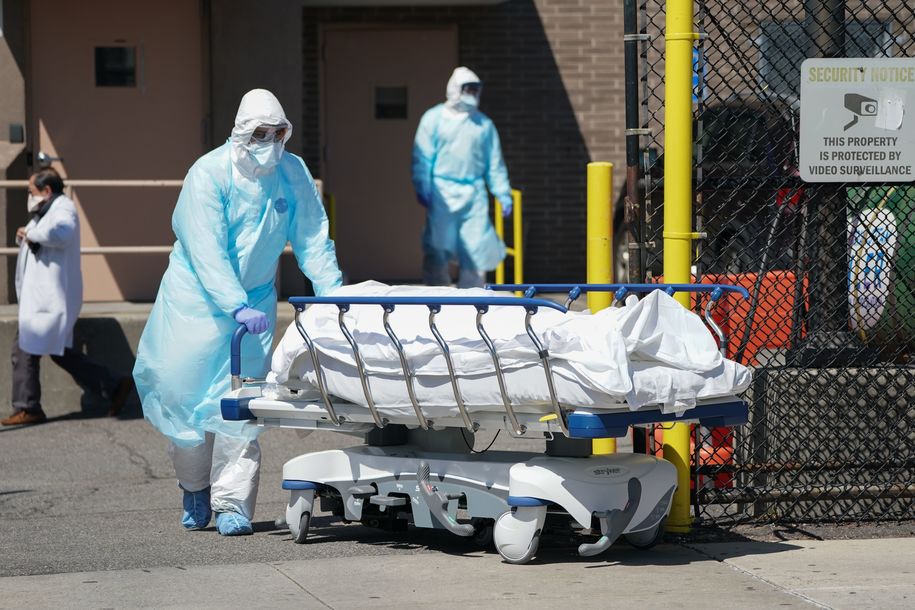 NBC News: “Hospitals across the country face dire shortages of vital medical equipment amid the coronavirus outbreak — including testing kits and thermometers — and fear they can’t ensure the safety of health care workers needed to treat patients with COVID-19, according to an internal government watchdog report released Monday.”

“The alarming findings, based on interviews conducted from March 23 to March 27, represent the first government assessment of how the country’s hospitals are coping with the outbreak and confirm previous media reports and warnings from health workers that the medical system is under unprecedented strain.”

Bloomberg: “While the U.S. constitution provides for the vice president to take over if the president becomes incapacitated (nine American ‘veeps’ have succeeded mid-term presidents), Britain’s government has no such constitutional set-up. Not since Nick Clegg was given the unusual role of deputy prime minister in the 2010 Conservative-Liberal Democrat coalition has the U.K. even had an official number two.”

“The very idea of ‘cabinet government’ establishes the prime minister as first among equals, and Johnson — often via his most senior adviser Dominic Cummings — has extended this principle much further than others as he’s centralized control of his administration. But as the Queen’s most senior government adviser, he serves only so long as his cabinet supports him, one reason for the constant rumors of plotting during his predecessor Theresa May’s unsteady time. Different cabinet officials stand in for the prime minister during weekly parliamentary questions if he’s unavailable; during this crisis, several including Cabinet Office minister Michael Gove and Health Secretary Matt Hancock have done the daily press briefings.”

The Acting Secretary of the Navy Thomas Modly blasted the now ousted commander of the USS Theodore Roosevelt as “stupid” in an address to the ship’s crew Monday morning, in remarks obtained by CNN.

“Congressional leaders and the White House are converging on the need for a new package of assistance to try and contain the coronavirus pandemic’s economic devastation, fearful that a $2 trillion bailout law enacted last month will only have a limited effect,” the Washington Postreports.

“House Democrats are eyeing a package of spending increases that would ‘easily’ cost more than $1 trillion, Speaker Nancy Pelosi (D-Calif.) told lawmakers Monday… Democrats are looking to add two additional months of unemployment assistance and another two months of small business assistance, among other things.”

“Trump has signaled support for some of the ideas Democrats back, such as expanded assistance to small business owners and new bailout checks for households. Republican leaders, meanwhile, have also called for more corporate aid and money to boost the overwhelmed health care system.”

“The intelligence community inspector general whom President Trump fired late Friday night has called on whistle-blowers to overcome any fears and come forward with information about waste and illegality in the government despite the administration’s reprisals,” the New York Timesreports.

Said Michael Atkinson: “The American people deserve an honest and effective government. They are counting on you to use authorized channels to bravely speak up — there is no disgrace for doing so.”

He added: “Please do not allow recent events to silence your voices.”

Reuters: “The University of Washington model, one of several cited by U.S. and some state officials, now projects U.S. deaths at 81,766 by Aug. 4, down about 12,000 from a projection over the weekend.”

“The model, which is frequently updated with new data, projects the peak need for hospital beds on April 15 and for daily deaths at 3,130 on April 16.”

“The Spanish government is working to roll out a universal basic income as soon as possible, as part of a battery of actions aimed at countering the impact of the coronavirus pandemic,” Bloomberg reports.

The government’s broader ambition is that basic income becomes an instrument “that stays forever, that becomes a structural instrument, a permanent instrument.”

White House trade adviser Peter Navarro told CNN said he was qualified to engage and disagree with Dr. Anthony Fauci on the use of an anti-malarial drug as a coronavirus treatment — which is not yet proven as effective — saying, “I’m a social scientist.”

Said Navarro: “Doctors disagree about things all the time. My qualifications in terms of looking at the science is that I’m a social scientist. I have a Ph.D. And I understand how to read statistical studies, whether it’s in medicine, the law, economics or whatever.”

“The Taliban in a statement Sunday said their peace deal with the United States was nearing a breaking point, accusing Washington of violations that included drone attacks on civilians, while also chastising the Afghan government for delaying the release of 5,000 Taliban prisoners promised in the agreement,” the Los Angeles Times reports.

“Top CEOs, in private conversations and pleas to President Trump, are warning of economic catastrophe if America doesn’t begin planning for a phased return to work as soon as May,” corporate leaders tell Axios.

“The CEOs say massive numbers of companies, big and small, could go under if business and government don’t start urgent talks about ways groups of workers can return.”

“As the global pandemic and a staggering economic crisis swells, Dr. Mehmet Oz, the controversial celebrity doctor, has been advising senior Trump administration officials on coronavirus-related matters. Oz has even caught President Trump’s attention with the celebrity doctor’s numerous appearances on the president’s favorite TV channel,” the Daily Beast reports.

“Chronic absenteeism is a problem in American education during the best of times, but now, with the vast majority of the nation’s school buildings closed and lessons being conducted remotely, more students than ever are missing class — not logging on, not checking in or not completing assignments,” the New York Times reports.

“The absence rate appears particularly high in schools with many low-income students, whose access to home computers and internet connections can be spotty. Some teachers report that less than half their students are regularly participating.”

“The trend is leading to widespread concern among educators, with talk of a potential need for summer sessions, an early start in the fall, or perhaps having some or even all students repeat a grade once Americans are able to return to classrooms.”

Max Boot: “Until now, I have generally been reluctant to label Donald Trump the worst president in U.S. history. As a historian, I know how important it is to allow the passage of time to gain a sense of perspective. Some presidents who seemed awful to contemporaries (Harry S. Truman) or simply lackluster (Dwight D. Eisenhower, George H.W. Bush) look much better in retrospect. Others, such as Thomas Jefferson and Woodrow Wilson, don’t look as good as they once did.”

“So I have written, as I did on March 12, that Trump is the worst president in modern times — not of all time. That left open the possibility that James Buchanan, Andrew Johnson, Franklin Pierce, Warren Harding or some other nonentity would be judged more harshly. But in the past month, we have seen enough to take away the qualifier ‘in modern times.’ With his catastrophic mishandling of the coronavirus, Trump has established himself as the worst president in U.S. history.”

“The private-equity industry is pressing members of Congress and senior Trump administration officials, including President Trump’s son-in-law Jared Kushner, to help them gain access to billions of dollars of stimulus funds to protect their riskier investments,” the Washington Post reports.

“The rush of behind-the-scenes jockeying by the powerful financial sector has raised the prospect that an industry often known for slashing workforces could tap into the program designed as a life raft for small businesses.”

Washington Post: “The Trump administration has stumbled in its initial push to implement the $2 trillion coronavirus aid package, with confusion and fear mounting among small businesses, workers and the newly unemployed since the bill was signed into law late last month.”

“Small-business owners have reported delays in getting approved for loans without which they will close their doors, while others say they have been denied altogether by their lenders and do not understand why. The law’s provision to boost unemployment benefits has become tangled in dated and overwhelmed state bureaucracies, as an unprecedented avalanche of jobless Americans seeks aid.”

“Officials at the Internal Revenue Service have warned that $1,200 relief checks may not reach many Americans until August or September if they haven’t already given their direct-deposit information to the government. Taxpayers in need of answers from the IRS amid a rapidly changing job market are encountering dysfunctional government websites and unresponsive call centers that have become understaffed as federal workers stay home.”

“Major supermarket chains are beginning to report their first coronavirus-related employee deaths, leading to store closures and increasing anxiety among grocery workers as the pandemic intensifies across the country,” the Washington Post reports.

“Though more than 40 states have ordered nonessential businesses to close and told residents to stay home to stem the spread of the virus, supermarkets are among the retailers that remain open. Thousands of grocery employees have continued to report to work as U.S. infections and death rates continue to climb, with many reporting long shifts and extra workloads to keep up with spiking demand. Many workers say they don’t have enough protective gear to deal with hundreds of customers a day.”