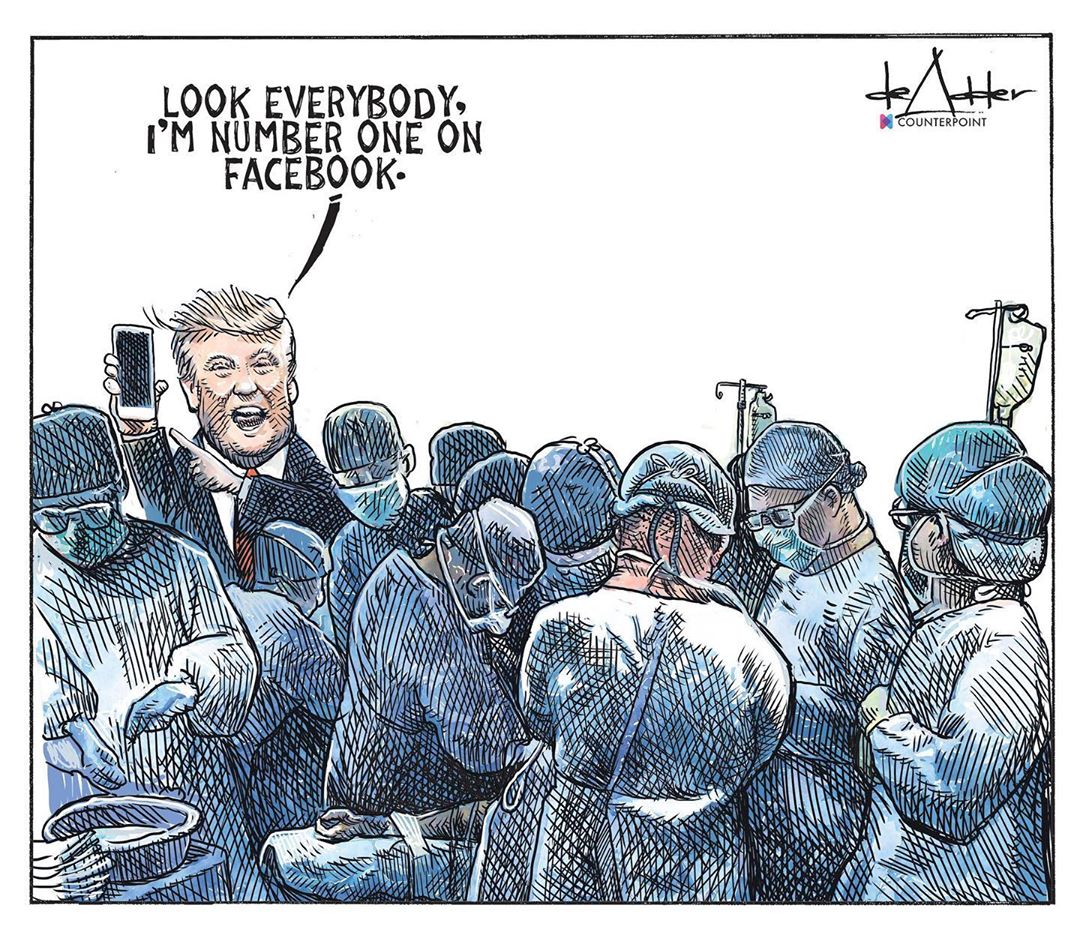 Adam Serwer: “Should Joe Biden defeat Trump in November, he will likely face the challenge of helping the nation recover from another economic catastrophe against similarly implacable GOP opposition. The Republican Party will rediscover its concern for debt once there is no longer a Republican in the White House. The more ideologically diverse Democratic caucus will be vulnerable to splintering and half measures.”

“The crucial obstacle to necessary intervention under such circumstances will not be traditional divides over the role of the state or the size of government. It will be, as it has been for more than a decade, the Republican belief that no one else should be allowed to wield power.”

Georgia House Speaker David Ralston (R) told Fetch Your News that efforts to make it easier to vote by mail in the state amid the coronavirus pandemic would harm Republicans.

Said Ralston: “The president said it best. This will be extremely devastating to Republicans and conservatives in Georgia.”

“Oh absolutely, I’d love to speak with him. I think he’s probably a nice guy.”

— President Trump, quoted by Bloomberg, when asked if he would take a call from Joe Biden, who plans to be in touch with coronavirus advice.

“The Democratic National Committee on Thursday postponed its national convention because of the coronavirus, moving it from mid-July to mid-August. The delay is the largest political concession so far to the public health crisis caused by the virus, which has led to the cancellation of hundreds of state and local conventions from both parties,” the New York Times reports.

“The convention will still be held in Milwaukee, as planned, the week of Aug. 17, officials said, a week before Republicans plan to gather in Charlotte, N.C., to re-nominate President Trump.”

Former Obama campaign manager David Plouffe predicted on a Fox News podcast that supporters of President Trump will turn out “at a historical level” on Election Day.

Said Plouffe: “You look at the economic situation and say, ‘How can an incumbent win in that?’ But, you know, no one’s blaming Trump for the damage. I think if you can lay his crisis response at his feet and connect that to the economy, I do think that’s some headwind he’s got to run into.”

He added: “And I think he’s going to turn out voters almost at a historical level on his behalf, so that makes him very dangerous if you’re Joe Biden.”

“Joe Biden’s campaign is calling on President Trump’s re-election campaign to pull a ‘wildly irresponsible’ video from Twitter that splices in sound to falsely depict Biden calling the coronavirus a hoax — and they’re asking Twitter to remove the ad if the president’s campaign won’t,” Axios reports.

“President Trump’s campaign is demanding that Jeff Sessions, the former Attorney General, stop attaching himself to the president in his effort to win back his old Senate seat in Alabama, after Mr. Sessions distributed a campaign mailer that mentioned the president 22 times,” the New York Times reports.

From an unusual letter to the Sessions campaign: “The Trump campaign has learned that your U.S. Senate campaign is circulating mailers like the one I have enclosed, in which you misleadingly promote your connections to and ‘support’ of President Trump… The enclosed letter and donor form in fact mention President Trump by name 22 times. The letter even makes the delusional assertion that you are President ‘Trump’s #1 supporter.”

Mark Kelly (D) has consistently led appointed Sen. Martha McSally (R-AZ) in polling, and not just by a little: four surveys in March showed Kelly up anywhere from five to 12 points, a better margin than Biden enjoys in the state (he has led Trump there in polling, but by smaller margins).

“While the public health crisis has complicated the president’s path to a second term, we think it’s premature to make dramatic changes to our assessment of the presidential election. We’ve long thought the president’s chances of reelection have been around 50-50. In light of recent developments, it may be that the president’s odds are a little bit lower now, but we don’t think the data suggest going further than that at this time.”

If being out in public were entirely up to them at this moment during the global pandemic, a new Gallup poll finds 14% of Americans say they would resume their normal day-to-day activities right now, but the rest would hold off:

Gabriel Sherman reports that President Trump only shifted his tone as the coronavirus virus spread to “Trump country.”

Said one former White House official: “The polling sucked. The campaign panicked about the numbers in red states. They don’t expect to win states that are getting blown to pieces with coronavirus.”

Wall Street Journal: “Mr. Biden’s ex-boss is staying on the sidelines even after he became the most likely Democratic nominee. That is delaying what might have been a period of boosted fundraising and postponing Mr. Biden’s ability to unite his party behind him.”

“Mr. Obama has made clear he won’t get involved in any major way until the nomination is formally settled … And with numerous April and May state primaries pushed back, that in all likelihood can’t mathematically happen until June.”