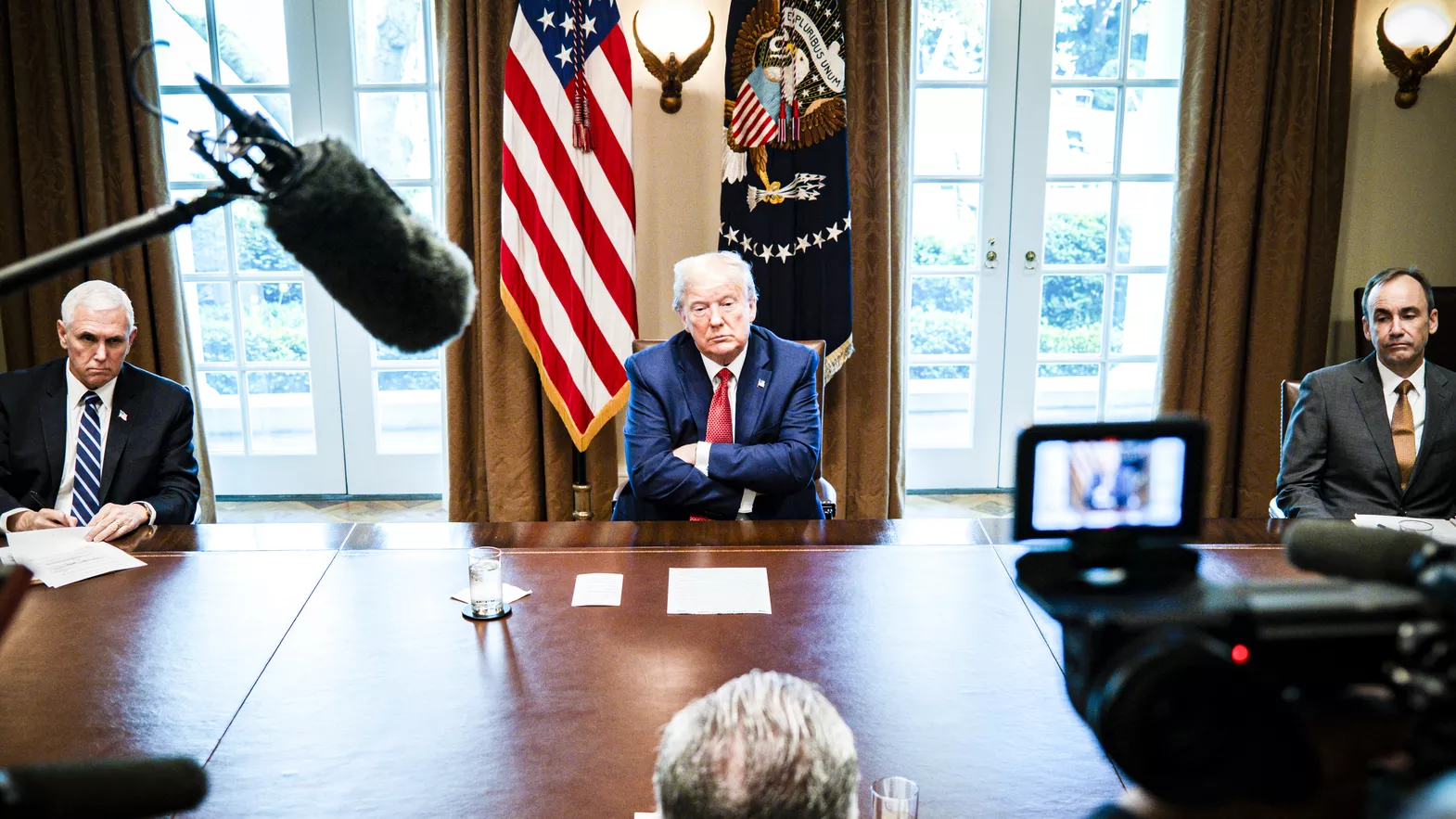 A former White House official told the Los Angeles Times that President Trump’s reelection campaign advisors “are terrified that the coronavirus outbreak, which so far has hit largely Democratic coastal cities hardest, will soon scythe across the rural areas that remain deeply loyal to Trump.”

“The advisors have warned Trump that the political consequences at the ballot box in November will be even worse if he is seen as too lax.” Said the former official: “Pay attention. You’re going to lose the election.”

Tim Miller: “How broken and depraved do you have to be to go on background with a reporter and say campaign aides are worried about red state deaths. Whoever said this needs to step away from politics and seek help.”

The irony is because of Trump’s negligence and incompetence, coupled with Fox News propaganda, and the anti-expert anti-anyone with any intelligence attitude among the Trump cultists, and also considering the ill health of many of the same cohort, this virus is going to wipe the slate clean of red state Trump voters.

“President Trump told governors on a conference call on Monday that he had not ‘heard about testing in weeks,’ suggesting that a chronic lack of kits to screen people for the coronavirus was no longer a problem,” the New York Times reports. “But governors painted a different picture on the ground.”

CBS News obtained audio of a call Monday between President Trump and rural state governors about coronavirus where Trump says, “I haven’t heard about testing in weeks. We’ve tested more now than any nation in the world. We’ve got these great tests, and we’ll come out with another one tomorrow, that’s almost instantaneous testing. But I haven’t heard about testing being a problem.”

That quote was in response to a question from Montana Gov. Steve Bullock (D) who said the availability of testing kits remained a problem.

Also on the same day, Govs. Gretchen Whitmer of Michigan (D) and Larry Hogan of Maryland (R) published an op-ed in the Washington Post asking the federal government for more “test kits, medical supplies and other lifesaving equipment to meet the scope of this pandemic.”

In fact, Ohio Gov. Mike DeWine (R) told CNN this morning his state will see its peak in coronavirus cases “between mid-April and mid-May… It’s a 30-day period time. We’re not quite sure when… Part of this is driven by the fact that we don’t have widespread testing.”

Politico: “The Trump administration is telling hospitals they can split ventilators between two patients and is escalating calls to scrap elective surgeries, as federal officials try to limit care rationing in facilities lacking the critical breathing machines. New federal guidelines on so-called ventilator splitting — an idea that’s been used extremely rarely in emergency situations — emphasizes it should ‘only be considered as an absolute last resort’ for hospitals swamped by coronavirus patients.”

The Atlantic: “On March 13, President Trump promised Americans they would soon be able to access a new website that would ask them about their symptoms and direct them to nearby coronavirus testing sites. He said Google was helping.”

“That wasn’t true. But in the following days, Oscar Health—a health-insurance company closely connected to Trump’s son-in-law, Jared Kushner—developed a government website with the features the president had described. A team of Oscar engineers, project managers, and executives spent about five days building a stand-alone website at the government’s request, an Oscar spokesperson told The Atlantic. The company even dispatched two employees from New York to meet in person with federal officials in Washington, D.C., the spokesperson said. Then the website was suddenly and mysteriously scrapped.”

“The company’s work on the coronavirus website could violate federal ethics laws.”

The coronavirus death toll has now surpassed that of the September 11 attacks, which claimed the lives of nearly 3,000 Americans.

Jonathan Last: “Understand that the publicly reported death toll is merely the lower bound on the true number. In order for a death to be included in this count, the patient must have tested positive for COVID-19 either pre- or post-mortem. In some cases hospitals are so overwhelmed that people in obvious respiratory distress are being admitted and treated for COVID-19 without being tested, because an official diagnosis is superfluous and tests are being rationed. Some of these people die.”

Associated Press: “The projections were grim: Even if the U.S. were to continue to do what it was doing, keeping the economy closed and most Americans in their homes, the coronavirus could leave 100,000 to 200,000 people dead and millions infected. And the totals would be far worse if the nation reopened.”

“Those stark predictions grew even more tangible and harrowing when paired with televised images of body bags lined up at a New York City hospital not far from where Trump grew up in Queens.”

“The confluence of dire warnings and tragic images served to move the president off his hopes for an Easter rebirth for the nation’s economy.”

“We’ve seen all too terribly the consequences of those who denied warnings of a pandemic. We can’t afford any more consequences of climate denial. All of us, especially young people, have to demand better of our government at every level and vote this fall.”

“I’m afraid many have been misled into thinking that some of his earlier statements about using the word hoax — and he used it in a specialized way — but saying it was going to disappear, those kinds of things, I feel badly for those who believe that stuff and have not been protecting themselves.”

Wall Street Journal: “In the Pelosi view, the first two bills passed amid the crisis were simply about dealing with the health emergency—buying medical supplies, for example—and the third was designed to mitigate the deep damage done by an economy shutting down. Now, she says, it is time to start thinking beyond that, to economic recovery.”

“So she envisions a phase-four bill that would pay for some growing workplace needs: medical leave, more protections for those at risk of infection, government funds to pay for coronavirus tests and help for pension funds at risk because of the economic jolt. Beyond that, the legislation would have a bigger goal: fund improvements in America’s infrastructure, including its health and digital infrastructure, both badly taxed in the current crisis.”

President Trump signaled agreement with Speaker Nancy Pelosi that rebuilding the nation’s infrastructure should be part of a Phase 4 economic relief bill:

“With interest rates for the United States being at ZERO, this is the time to do our decades long awaited Infrastructure Bill. It should be VERY BIG & BOLD, Two Trillion Dollars, and be focused solely on jobs and rebuilding the once great infrastructure of our Country!”

President Trump hasn’t spoken to Speaker Nancy Pelosi in more than five months but he tweeted he did watch her on MSNBC this morning.

Said Trump: “I watched a portion of low rated (very) Morning Psycho (Joe) this Morning in order to see what Nancy Pelosi had to say, & what moves she was planning to further hurt our Country. Actually, other than her usual complaining that I’m a terrible person, she wasn’t bad. Still praying!”

During the interview, Pelosi said she now just talks to Trump through the TV — and she was right.

House Majority Leader Steny Hoyer urged lawmakers in a “Dear Colleague letter” to keep their schedules “very flexible” in the weeks and months to come.

“As lawmakers prepare for another round of fiscal stimulus to address economic fallout from the coronavirus pandemic, Speaker Nancy Pelosi suggested the next package include a retroactive rollback of a tax change that hurt high earners in states like New York and California,” the New York Times reports.

“The move to lift a limit on the state and local tax deduction, or SALT, would provide a quick cash infusion in the form of increased tax rebates to an estimated 13 million American households — nearly all of which earn at least $100,000 a year. More than half the benefits of such an effort would go to millionaires.”

CNN: “It’s no exaggeration to say Trump faces the most critical month of his presidency yet — and how he conducts himself will be crucial for the country and his own hopes of reelection. But there are signs that he does not fully understand the stakes nor is willing to relegate his own interests in favor of the common good.”

“Trump still appears to be marveling at the spread of the virus, which he says no one could have predicted. Health experts had anticipated its arrival in the US for months as he predicted a miracle would occur and it would just go away.”

“And on a day when so many Americans died, he boasted at one point that his hair blowing in the breeze in the White House Rose Garden was his own, marking an inappropriate tone for a harrowing national moment.”

“Goldman Sachs has significantly downgraded its outlook for the US economy between April and June. The investment bank now expects an annualized rate of contraction of 34% compared to the previous quarter. The last estimate was an already-shocking 24%,” CNN reports.

“Goldman revised its forecast because it thinks the US labor market collapse will be even worse than anticipated. It now sees the unemployment rate rising to 15% by the middle of the year, compared to 9% before.”

Economists at the Federal Reserve Bank of St. Louis project total employment reductions of 47 million, which would translate to a 32.1% unemployment rate, CNBC reports.

“The captain of a nuclear aircraft carrier with more than 100 sailors infected with the coronavirus pleaded Monday with U.S. Navy officials for resources to allow isolation of his entire crew and avoid possible deaths in a situation he described as quickly deteriorating,” the San Francisco Chronicle reports.

Detroit Free Press: “The virus’ spread through the department and through the region as a whole has officers patrolling on edge. Multiple exposures — including the pancake breakfast, those that are travel-related, contact with infected coworkers and during the course of policing — had sent 556 Detroit Police Department employees, including 468 sworn members, into quarantine as of Friday. That same day, officials said 39 officers had tested positive for COVID-19 and the department previously announced the deaths of two members.”

The pastor of a Tampa megachurch is facing charges after refusing to close its doors despite a “safer at home” order meant to stop the spread of the coronavirus, Fox 13 News reports.

The sheriff says up to 500 people were in attendance at Pastor Rodney Howard-Browne’s Sunday services.

Senate Majority Leader Mitch McConnell (R-KY) told Hugh Hewitt that because the Senate was “tied down on the impeachment trial” during the early stages of the coronavirus outbreak, “it diverted the attention of the government, because everything every day was all about impeachment.”

An alternative view from Joshua Geltzer: “Impeachment didn’t distract Trump. It revealed how he would handle coronavirus.”

New York Times: “The totalitarian state’s singular ability to control the movement of people also bolsters its disease-control efforts. But decades of isolation and international sanctions have ravaged North Korea’s public health system, raising concerns that it lacks the medical supplies to fight an outbreak, which many fear has already occurred… Many observers of North Korea doubt its claims of not having any coronavirus cases. But a lack of testing equipment may mean it literally has not detected a single case.”

Fortune: “With a negative net worth of $65 billion and an additional $140 billion in unfunded liabilities, the USPS originally expected to run out of liquidity by 2021 without intervention. That has accelerated rapidly because of COVID-19. Fewer people and businesses are sending mail because of the outbreak, which could hasten the decline of the Postal Service and close its doors as early as June.”