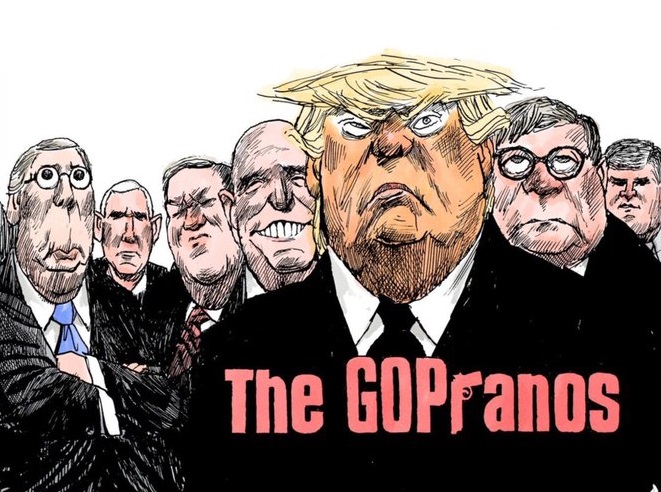 Speaker Nancy Pelosi told CNN that President Trump’s delay and denial in responding to the coronavirus pandemic has had “deadly” consequences for Americans.  Said Pelosi: “His denial at the beginning was deadly, his delaying of getting equipment … to where it is needed is deadly, and now the best thing would be to do is to prevent more loss of life, rather than open things up so that, because we just don’t know.”

She added: “As the President fiddles, people are dying.”

During his coronavirus briefing, President Trump suggested that hospitals had squandered or done worse with masks and were “hoarding” ventilators, and that states were requesting equipment despite having what they need, the Washington Post reports.

“The worst thing you can do is raise false expectations and then watch them get dashed – then, they begin to lose confidence in their leadership. So we should just tell the truth as best we know it, as best the scientists know it. We should let them speak.” — Joe Biden, in an interview with NBC News.

Michael Osterholm and Mark Olshaker: “Our leaders need to begin by stating a number of hard truths about our situation. The first is that no matter what we do at this stage, numerous hospitals in the United States will be overrun. Many people, including health care workers, will get sick and some will die. And the economy will tank. It’s too late to change any of this now.”

“The second hard truth is that at this stage, any public health response that counts on widespread testing in the United States is doomed to fail. No one planned on the whole world experiencing a health conflagration of this magnitude at once, with the need to test many millions of people at the same time. Political leaders and talking heads should stop proffering the widespread-testing option; it simply won’t be available.”

“A third hard truth is that shortages of personal protective equipment — particularly N-95 masks — for health care workers will only get worse in the United States as global need continues to rise precipitously. There is no point holding out the false hope that the Defense Production Act will save the residents of the United States. Not enough manufacturing activities can be converted to produce masks in a matter of weeks.”

New York Gov. Andrew Cuomo told CNN that he didn’t believe a possible New York quarantine was legal and that it would be a “federal declaration of war” after President Trump said he was considering such a tactic for the New York metro area coronavirus cases increase.

President Trump tweeted Saturday night that he has asked the Centers for Disease Control and Prevention to issue a “strong Travel Advisory” but that a quarantine on the New York region “will not be necessary,” the Washington Post reports.

New York Times: “He had offered no details about how his administration would enforce a ban on the movements in or out of the three northeastern states. However, he said the restrictions would not prevent truckers from making deliveries into the area or traveling through, and would not affect trade with the three states ‘in any way.’”

“The White House coronavirus response coordinator said Sunday that when it comes to procuring medical equipment for the coronavirus pandemic, the federal government is urging other states to emulate New York,” Politico reports.

Said Dr. Deborah Birx: “We are asking every single governor and every single mayor to prepare like New York is preparing now.”

Dr. Anthony Fauci told CNN that about 56% of the country’s new infections are coming from the New York City area.

Associated Press: “The billions of tax dollars headed for hospitals and states as part of the $2.2 trillion coronavirus response bill won’t fix the problem facing doctors and nurses: a critical shortage of protective gowns, gloves and masks. The problem isn’t a lack of money, experts say. It’s that there’s not enough of those supplies available to buy. What’s more, the crisis has revealed a fragmented procurement system now descending into chaos just as demand soars.”

Wall Street Journal: ““Legislators from both parties, administration officials, economists, think tanks and lobbyists are already roughing out the contours of yet another emergency-spending package—perhaps larger than the last—to try to keep the coronavirus crisis from turning into a 21st-century Great Depression. Many expect the debate to begin in earnest by late April.”

“The ideas being floated include extending last week’s package to make the benefits last longer, as well as plugging in likely holes in the hastily assembled bill. One item in particular cited by both President Trump and Democratic leaders is a desire for more money to shore up state government budgets collapsing under lost tax revenues and new spending demands.

“A common theme from economists and legislators across the political spectrum: The latest measure was mainly about keeping U.S. commerce on life support while it endures a medically induced coma. That is, paying businesses and workers revenues and wages lost during the shutdown. A next phase would likely pivot from stabilization to stimulus—providing the patient a robust regimen of physical therapy in an attempt to get the economy back to full health.”

Texas Attorney General Ken Paxton (R) declared in a statement that gun stores should be classified as essential businesses, allowing them to remain open amid shutdowns imposed on local businesses to stem the spread of coronavirus.

“Eager to demonstrate that he is in control of a viral outbreak that is spreading rapidly across the country, President Trump has ramped up efforts to show he is using some of his broadest powers as commander in chief,” the Washington Post reports.

“But the unprecedented push has been plagued by growing confusion about how far his authorities actually extend and how much he is willing to use them.”

“The number of confirmed coronavirus cases in Florida is doubling every three days, putting the state on a trajectory to see tens of thousands of infections in the coming weeks,” a Tampa Bay Times analysis shows.

“Florida remains one of the few states with a large outbreak not to issue a statewide order to keep residents at home. Several counties across the state, including Hillsborough and Pinellas, issued ‘safer at home’ orders in the last week.”

“In at least 10 government reports from 2003 to 2015, federal officials predicted the United States would experience a critical lack of ventilators and other lifesaving medical supplies if it faced a viral outbreak like the one currently sweeping the country,” CNN reports.

“The drumbeat of warnings undermines President Trump’s claim last week that ‘nobody in their wildest dreams‘ could have imagined the demand for ventilators that now exists.”

New York Times: “While it ravages New York and metastasizes throughout much of the Northeast, the coronavirus is also quickly bearing down on new hot spots, sending doctors and first responders scrambling to prepare for the onslaught.”

“Still unable to conduct widespread testing, and fearful as the federal government fails to marshal critical supplies, officials in Boston, Detroit, Chicago, Atlanta, Milwaukee and Los Angeles are watching caseloads climb and taking extraordinary measures to maximize their resources and protect medical staff, all the while hoping that aggressive social-distancing measures might ward off the most dismal projections.”

New York Times: “The members of the coronavirus task force typically devoted only five or 10 minutes, often at the end of contentious meetings, to talk about testing, several participants recalled. The Centers for Disease Control and Prevention, its leaders assured the others, had developed a diagnostic model that would be rolled out quickly as a first step.”

“But as the deadly virus from China spread with ferocity across the United States between late January and early March, large-scale testing of people who might have been infected did not happen — because of technical flaws, regulatory hurdles, business-as-usual bureaucracies and lack of leadership at multiple levels.”

“The result was a lost month, when the world’s richest country — armed with some of the most highly trained scientists and infectious disease specialists — squandered its best chance of containing the virus’s spread. Instead, Americans were left largely blind to the scale of a looming public health catastrophe.”