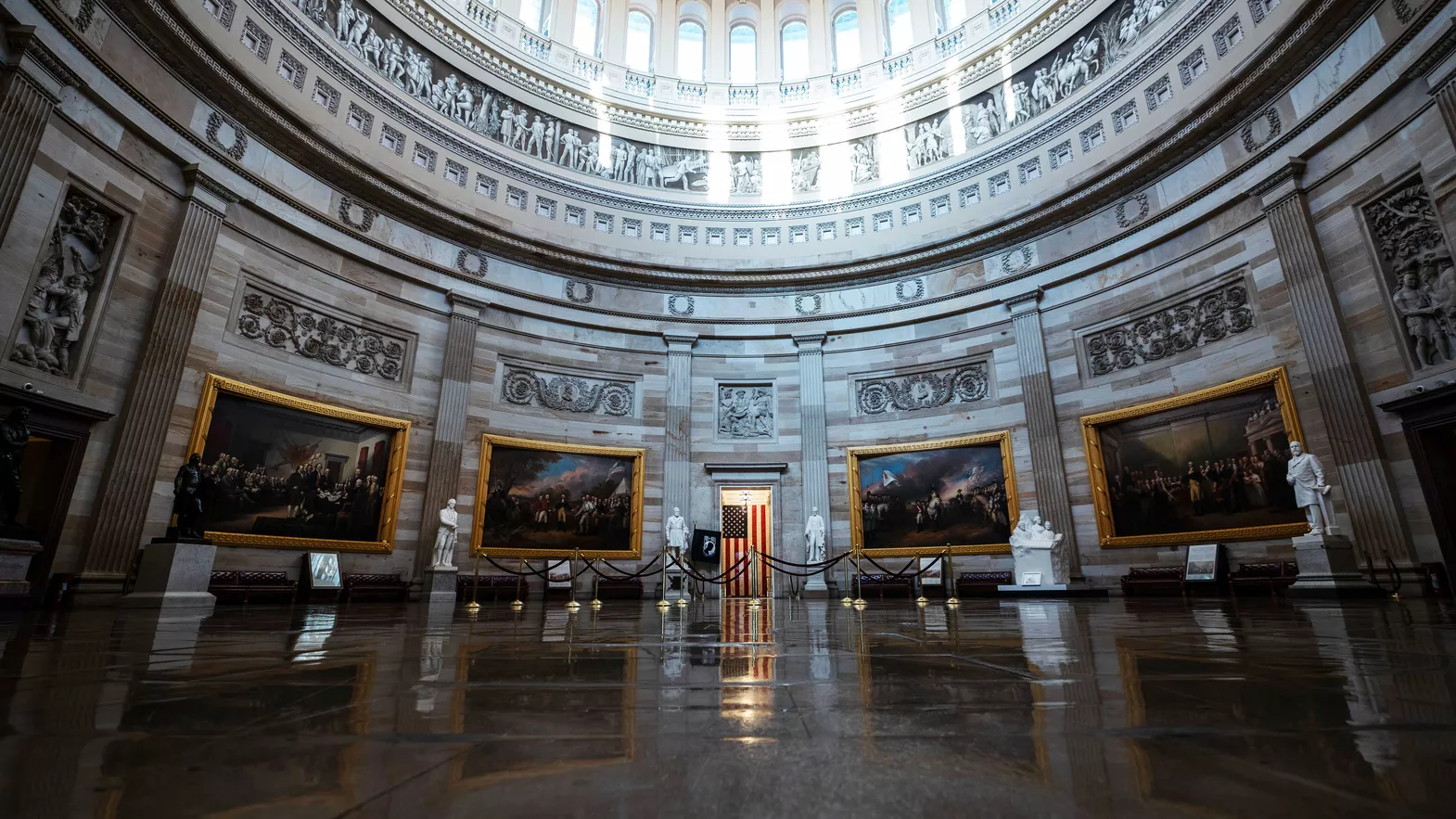 “When President Trump signed the $2 trillion economic stabilization package to respond to the coronavirus pandemic on Friday, he undercut a crucial safeguard that Democrats insisted upon as a condition of agreeing to include a $500 billion corporate bailout fund,” the New York Timesreports.

“In a signing statement released hours after Mr. Trump signed the bill in a televised ceremony in the Oval Office, the president suggested he had the power to decide what information a newly created inspector general intended to monitor the fund could share with Congress.”

Wall Street Journal: “Mr. Trump has told people he wants his signature to appear on the direct payment checks that will go out to many Americans in the coming weeks.”

“When Sen. Lindsey Graham (R-SC) called President Trump last Sunday, he delivered a blunt message: If you reopen the nation’s economy too early against the advice of public-health experts, you will own the deaths from the novel coronavirus that follow,” the Washington Post reports.

“Trump’s stalwart ally also warned that the president wouldn’t be the only one held responsible. Graham said the Republican Party itself risks being defined ahead of this fall’s elections as prioritizing commerce and the stock market over the health and safety of the American people.”

“Graham’s private plea illustrates the political calculations underway inside the leadership ranks of the Republican Party as the president balances dual crises as he seeks reelection: the pandemic that is claiming lives and overburdening hospitals, and the resulting economic meltdown that already has left millions jobless, with many facing financial ruin.”

“Texas Gov. Greg Abbott (R) signed an executive order on Thursday that would require travelers from some coronavirus hotspots to self-quarantine… Other states have imposed similar orders,” Vox reports.

“These orders implicate one of the fundamental premises of the union among the 50 states: the right of American citizens to travel among them freely.”

“If states can decide that some US citizens are not welcome within their borders, it may cease to be a union at all. This right to travel is implicit in the notion that citizens are Americans, and not simply Texans or New Yorkers.”

Rhode Island began to stop vehicles with New York license plates on Friday in an effort to keep the coronavirus from spreading from the Big Apple—considered to be the U.S. epicenter of the virus, the Providence Journal reports.

New York Daily News: Could the city be increasingly shut off from the rest of the country?

“China and Russia have both seized on the novel coronavirus to wage disinformation campaigns that seek to sow doubts about the United States’ handling of the crisis and deflect attention from their own struggles with the pandemic, according to American intelligence officials and diplomats,” the New York Times reports.

“Kremlin-aligned websites aimed at Western audiences have trafficked in conspiracy theories to spread fear in Europe and political division in the United States, the officials said, noting that Russia’s diplomats and state-run news media have arguably been more restrained.”

“China has been more overtly aggressive. It has used a network of government-linked social media accounts to spread discredited, and sometimes contradictory, theories.”

The Trump administration is preparing to suspend collection of import tariffs for three months to give U.S. companies financial relief amid the coronavirus pandemic, the Wall Street Journal reports.

“Companies would still be liable for the tariffs at a later date, which hadn’t been determined, another official said. Officials said there would be no formal changes to tariff policy.”

Fitch: “Fitch considers U.S. debt tolerance to be higher than that of other ‘AAA’ sovereigns. However, high fiscal deficits and debt — which were already rising even before the onset of the huge economic shock precipitated by the coronavirus — are starting to erode these credit strengths.”

“The risk of a near-term negative rating action has risen given the magnitude of the shock to the economy and public finances from the coronavirus and the commensurate and necessary fiscal policy response, particularly in the absence of a credible consolidation plan for the country’s pre-existing, longer-term public finance and government debt challenges.”

“Prime Minister Benjamin Netanyahu of Israel was set to hold onto power after his chief rival, Benny Gantz, reversed himself Thursday and signaled that he would be open to serving in a Netanyahu-led government,” the New York Times reports.

“Gantz, a former Israeli army chief who had vowed to bring Mr. Netanyahu’s long rule to an end and fought him to a draw in three elections, said he was changing course to help bring the country together to fight the coronavirus pandemic.”

Associated Press: “Underlying this political dance is Trump’s tendency to talk about the government as though it’s his own private business. The former real estate mogul often discusses government business like a transaction dependent on relationships or personal advantage, rather than a national obligation… Trump has kept a close eye on the coronavirus media coverage and noted which local officials were praising or criticizing him.”

“There’s no evidence that Trump has held up a governor’s request for assistance for personal or political reasons. Still aides say it’s understood that governors who say nice things about the federal response are more likely to be spared public criticism from the White House or threats of withheld assistance.”

Associated Press: “Despite wild swings in financial markets and signs that unemployment is surging — both of which could hurt Trump in an election year — many businesses say it’s not clear that reopening will be even an option in a few weeks: They have to follow the orders set in each state, and many of those are open ended or could be extended at any time. They are worried that opening too soon could be seen as irresponsible. And even if they did reopen, would customers come if the virus isn’t under control?”

Associated Press: “Scientists are reluctant to predict exactly when restrictions could be safely loosened, but based on what they’ve observed in China — the first country struck by the new virus — some relief could come approximately six to eight weeks after lockdowns are implemented. That is based on the assumption that cases could peak two or three weeks after lockdowns begin, and gradually decline for the next two or three weeks.”

“While we may yearn for a clear timeline for when life will return to normal, scientists say that isn’t exactly the right question. Routines won’t resume exactly as they were for several months, or longer – but that doesn’t mean we’ll all be stuck in total lockdowns until then.”

Wall Street Journal: “Treasury Secretary Steven Mnuchin indicated that the U.S. government would take stakes in airline carriers in exchange for billions in direct grants to the companies, part of a $2 trillion economic rescue package.”

“He detailed his plans during last-minute negotiations when the aid to airlines emerged as a major sticking point. Republicans had rejected providing cash grants to airlines, and an earlier version of the legislation would have provided $50 billion in loans and loan guarantees to passenger airlines and $8 billion to cargo airlines—but no direct aid.”

“Senate Republicans inserted an easy-to-overlook provision on page 203 of the 880-page bill that would permit wealthy investors to use losses generated by real estate to minimize their taxes on profits from things like investments in the stock market. The estimated cost of the change over 10 years is $170 billion.”

New York Times: “Democrats proudly announced that they had won agreement on language to block President Trump, other government officials and their families from receiving assistance from a $500 billion fund to be administered by the Treasury Department.”

“But it turns out that the provision might not preclude funds from going to companies owned by the family of Mr. Trump’s son-in-law and White House adviser, Jared Kushner, while Mr. Trump’s companies would not be barred from benefiting from other elements of the bill intended to help broad swaths of American business.”

“For example, certain hotel owners, even those employing thousands of people, will be eligible for small-business loans, a provision that could potentially benefit Mr. Trump’s company to help to continue to pay wages for his employees. The Trump Organization could also benefit from the $15 billion change to the tax code won by restaurants and retailers.”

“Like hotels and airlines, cruise companies have seen their business decimated by the coronavirus pandemic and economic shutdowns,” the Washington Post reports.

“But unlike those industries, major cruise operators don’t locate their headquarters in the United States, so they will not have access to $500 billion in aid for large employers in the massive stimulus bill, the industry’s trade group said Thursday.”