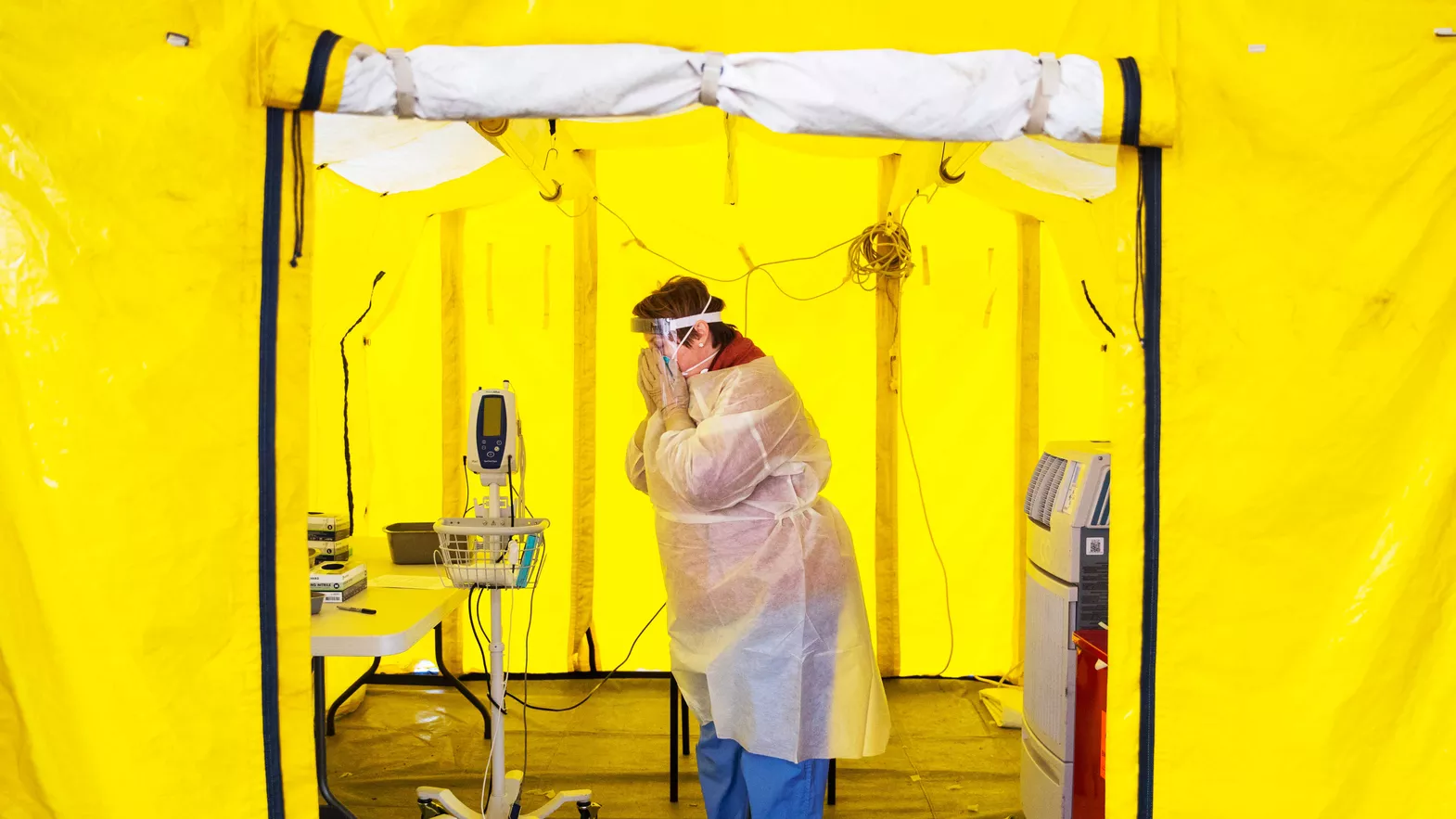 “The number shatters the Great Recession peak of 665,000 in March 2009 and the all-time mark of 695,000 in October 1982. Consensus estimates from economists surveyed by Dow Jones showed an expectation for 1.5 million new claims…”

New York Times: “As staggering as the figures are, they almost certainly understate the problem. Some part-time and low-wage workers don’t qualify for unemployment benefits. Nor do gig workers, independent contractors and the self-employed, although the emergency aid package being considered by Congress would broaden eligibility.”

Wall Street Journal: “Millions of Americans, already fearful the new coronavirus could infect them or their families, now have two new worries: When will the job machine start again? And can they hold out until it does?”

Asked on CNBC about the record joblessness report, which totaled nearly 3.3 million people, Treasury Secretary Steve Mnuchin downplayed the report. Said Mnuchin: “I just think these numbers right now are not relevant. Whether they’re bigger or smaller in the short term… the good thing about this bill is, the president is protecting these people.”

Foreign Policy: “Suffice it to say, the Trump administration has cumulatively failed, both in taking seriously the specific, repeated intelligence community warnings about a coronavirus outbreak and in vigorously pursuing the nationwide response initiatives commensurate with the predicted threat. The federal government alone has the resources and authorities to lead the relevant public and private stakeholders to confront the foreseeable harms posed by the virus. Unfortunately, Trump officials made a series of judgments (minimizing the hazards of COVID-19) and decisions (refusing to act with the urgency required) that have needlessly made Americans far less safe.”

“In short, the Trump administration forced a catastrophic strategic surprise onto the American people. But unlike past strategic surprises—Pearl Harbor, the Iranian revolution of 1979, or especially 9/11—the current one was brought about by unprecedented indifference, even willful negligence. Whereas, for example, the 9/11 Commission Report assigned blame for the al Qaeda attacks on the administrations of presidents Ronald Reagan through George W. Bush, the unfolding coronavirus crisis is overwhelmingly the sole responsibility of the current White House.”

“U.S. deaths from the coronavirus pandemic have topped 1,000, in another grim milestone for a global outbreak that is taking lives and wreaking havoc on economies and established routines of ordinary life,” the AP reports.

“Medical professionals around the US told BuzzFeed News that the official numbers of people who have died of COVID-19 are not consistent with the number of deaths they’re seeing on the front lines.”

“In some cases, it’s a lag in reporting, caused by delays and possible breakdowns in logging positive tests and making them public.”

“Scientists warned that the United States someday would become the country hardest hit by the coronavirus pandemic. That moment arrived on Thursday,” the New York Times reports.

“In the United States, at least 81,321 people are known to have been infected with the coronavirus, including more than 1,000 deaths — more cases than China, Italy or any other country has seen.”

“The Trump administration, state officials and even individual hospital workers are now racing against each other to get the necessary masks, gloves and other safety equipment to fight coronavirus — a scramble that hospitals and doctors say has come too late and left them at risk,” Politico reports.

“But according to a previously unrevealed White House playbook, the government should’ve begun a federal-wide effort to procure that personal protective equipment at least two months ago.”

“The Trump administration is pushing the U.N. Security Council to call attention to the Chinese origins of the coronavirus, triggering a stalemate as the global body seeks to cobble together a response to the pandemic,” NBC News reports.

“Talks among U.N. Security Council nations over a joint declaration or resolution on the coronavirus have stalled over U.S. insistence that it explicitly state that the virus originated in Wuhan, China, as well as exactly when it started there. China’s diplomats are enraged according to the diplomats, even as they seek to put their own language into the statement praising China’s efforts to contain the virus.”

“Perhaps the most important thing about the $2.2 trillion stimulus bill the Senate passed late Wednesday night is that it is not a stimulus bill at all,” Axios reports.

“It is not intended to stimulate growth and spending to offset a potential downturn; it is designed to prevent mass homelessness, starvation and a wave of business closures not seen since the height of the Great Depression.”

Washington Post: “The good news is the majority of the money is going to laid-off workers, small business owners, hospitals and state and local governments. The bad news is it won’t be enough to stop a recession. And it’s an open question whether the nation can avoid an economic depression, the likes of which haven’t been seen since the 1930s.”

“Massie also hinted that he might object to a voice vote in the House of Representatives, which would force all members to return to Washington, D.C. and slowdown movement on the bill.”

“Protesters on the Mexican side of the border blocked the Mexico-bound lanes in the twin border cities of Ambos Nogales for several hours Wednesday to express their displeasure with the Mexican government’s response to the coronavirus pandemic,” USA Today reports.

“The protesters demanded greater controls and screenings on southbound traffic at the U.S.-Mexico border out of concern that travelers from the U.S. could import new cases of the coronavirus into Mexico.”

“As hospitals, health-care staff and governors clamor for ventilators, intensive-care beds, and protective gear, President Trump and the U.S. Chamber of Commerce are opposing the one thing many say would do the most good in the fight against the runaway coronavirus pandemic: Activate the Defense Production Act to coordinate a war-like effort to ramp up the manufacture and distribution of critical supplies,” Bloomberg reports.

“More than 100 former national security officials urged Trump in a letter Wednesday to use the act’s authority, saying it was necessary that government coordinate the effort and assign priorities to confront the crisis. Trade groups, governors, attorneys general and Democratic senators are lodging similar calls.”

New York Times: “Some 80 percent of the senior positions in the White House below the cabinet level have turned over during President Trump’s administration, with about 500 people having departed since the inauguration. Mr. Trump is on his fourth chief of staff, his fourth national security adviser and his fifth secretary of the Department of Homeland Security.”

“Between Mr. Trump’s history of firing people and the choice by many career officials and political appointees to leave, he now finds himself with a government riddled with vacancies, acting department chiefs and, in some cases, leaders whose professional backgrounds do not easily match up to the task of managing a pandemic.”

“The Trump administration cut staff by more than two-thirds at a key U.S. public health agency operating inside China, as part of a larger rollback of U.S.-funded health and science experts on the ground there leading up to the coronavirus outbreak,” Reuters reports.

“Most of the reductions were made at the Beijing office of the U.S. Centers for Disease Control and Prevention and occurred over the past two years.”

From a new study on the 1918 flu pandemic: “We find that cities that intervened earlier and more aggressively do not perform worse and, if anything, grow faster after the pandemic is over.”

Wall Street Journal: “With new infections dwindling, factories are restarting, stores are reopening, and people are venturing outdoors. In some ways, China is where the U.S. and Europe hope to be within weeks or months. Yet many Chinese factories find demand for their products has evaporated. Consumers in China and elsewhere are reluctant to spend over worries about what they have lost and what lies ahead.”

“For U.S. businesses tied to global trade, exporters and multinational companies, China’s limited return to normal foreshadows the potential for a sluggish U.S. recovery. Consumption, which makes up more than two-thirds of the American economy, looks to be hobbled by lost jobs, fallen income and diminished confidence for an unknown period. Even countries emerging from national lockdowns later than others will likely see weaker demand among trading partners also hurt.”

“The White House removed a top public affairs official at the Department of Homeland Security in a move that shocked many in the department as it takes a lead role in handling the coronavirus pandemic,” Politicoreports.

“Heather Swift, who was DHS’s deputy assistant secretary of public affairs, was abruptly pushed out of her position on Friday after the Presidential Personnel Office raised questions about her loyalty to President Trump.”

Mississippi Gov. Tate Reeves (R) “signed an executive order early this evening superseding a patchwork of local bans on public gatherings in Mississippi and other heightened restrictions that several municipalities across the state have ordered or considered in the wake of COVID-19’s spread inside Mississippi,” the Jackson Free Press reports.

“The order seems to declare that most types of businesses in Mississippi are ‘essential’ and thus exempt from social-distancing requirements suggested in the order.”

“The city of Miami will enact a 10 p.m. curfew starting Friday night, creating the most severe restrictions yet for the city’s more than 460,000 residents as government leaders push to curb the spread of the novel coronavirus that causes the disease COVID-19,” the Miami Herald reports.

“The nation’s television news outlets, especially the three major cable-news networks, are grappling with a nagging paradox as President Trump continues to orchestrate his White House briefings on the novel coronavirus pandemic,” the Daily Beast reports.

“On the one hand, their ratings have never been higher, and viewers’ appetites for the live sessions have shown no signs of dwindling. On the other hand, journalists and executives at MSNBC, CNN and the often Trump-friendly Fox News—which scored an impressive 6.2 million viewers for Sunday’s installment of the Trump show, according to Nielsen—are increasingly facing the likelihood that they are becoming an uncritical and unvetted transmission belt for propaganda and misinformation.”

“In an echo of the self-criticism expressed during the 2016 presidential race, when the cable networks repeatedly broadcast Trump’s campaign rallies live and unexpurgated, top MSNBC anchors have already argued publicly that their own network should not air the president’s pandemic musings in full.”

Washington Post: “Mulvaney is one of three President Trump confidants to get a coronavirus test while exhibiting no symptoms of the disease. And on Sunday, Sen. Rand Paul (R-Ky.) announced he tested positive despite being asymptomatic, refusing to disclose how he was able to get tested in Washington on March 16.”

“The easy access Paul and other high-ranking politicians have gotten to coronavirus tests highlights the extent to which members of America’s elite continue to have greater access to medical care during the pandemic, even as federal officials emphasize that testing should be reserved for health care providers and people who are seriously ill. Even in the nation’s capital, hospitals are reporting a shortage of tests and the protective gear needed to administer them.”