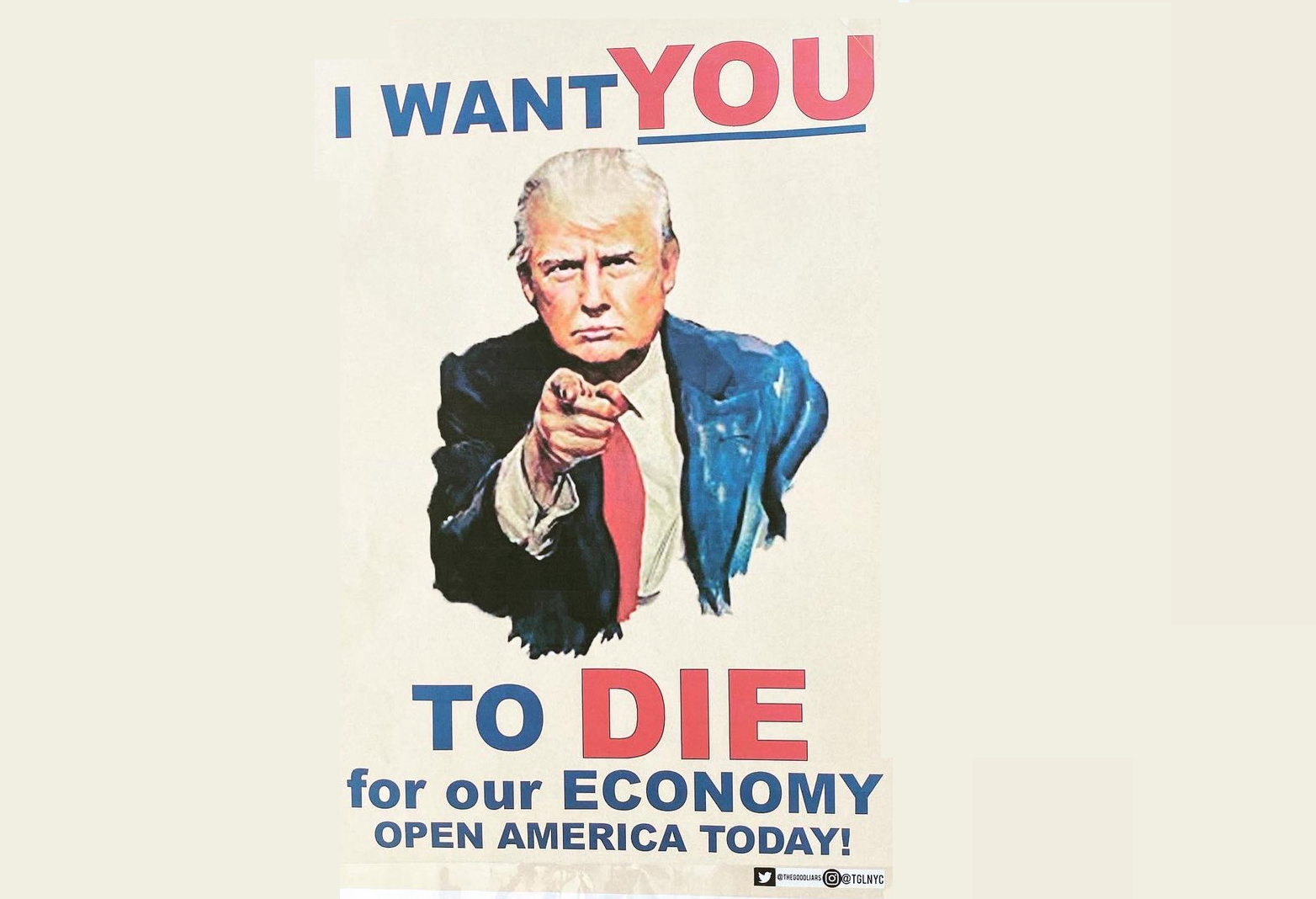 “Facing one of the worst economic downturns in American history, one that is unsparing in its trauma, the Senate late Wednesday unanimously approved a $2 trillion emergency relief bill that attempts to arrest the financial havoc caused by the coronavirus pandemic,” the Washington Post reports.

“The sprawling legislation, which passed 96 to 0, would send checks to more than 150 million American households, set up enormous loan programs for businesses large and small, pump billions of dollars into unemployment insurance programs, greatly boost spending on hospitals, and much more.”

Playbook says a voice vote in the House on the massive economic relief package is most likely and not a unanimous consent.

“Let us explain. The No. 1 choice is a unanimous consent vote, which would have the House pass this bill without any recorded action. If they can’t do that — remember, just one person needs to dissent — the next best option is a voice vote, a method that’s not appreciably different than a unanimous consent, but allows lawmakers to go to the floor to shout ‘aye’ or ‘no.’ The chair decides which side prevails. The political benefit to a voice vote is people can come and vote if they choose.”

“If all of that goes sideways, the next best option is to bring the House back, and allow for a very long vote series, in which the voting machines — they include a card slot, and two buttons to cast your vote — would be cleaned after each use.”

Politico: “Over the last two weeks, Trump has embarked on a striking chapter of his optics-obsessed presidency, turning the all-but-abandoned briefing room into the set of a largely unscripted television series that has gripped, worried and (depending on one’s political affiliation) infuriated viewers.”

“Stripped of the weapon of his rallies, of ‘chopper talk,’ of the sorts of set pieces to which the populace had grown accustomed over the three-plus years he’s been commander-in-chief, Trump as a president in crisis has engineered something different. While governors from New York to California have staged almost daily briefings, offering a traditional mixture of stern warnings and words of comfort, Trump has created something more like a show built on narrative surprises and populated with familiar characters—the good doctors, the bad reporters, the loyal lieutenants. And in the middle of it all, playing the role of the ringmaster, the marketer and the brander and the professed expert, is Trump.”

“His mood and his message have ebbed and flowed, alternately boasting and bashing, soothing and striking, intermittently solemn, flippant and peeved, flouting facts and shifting blame, underplaying dire projections and overselling potential vaccines.”

“The three states that President Donald Trump has formally declared coronavirus disaster areas have not received the disaster unemployment assistance that they expected to follow that designation,” Politico reports.

“The Department of Homeland Security has been briefed that New York City’s morgues are nearing capacity,” Politico reports.

“Officials were told that morgues in the city are expected to reach capacity next week, per the briefing. A third person familiar with the situation in New York said that some of the city’s hospital morgues hit capacity over the last seven days.”

San Francisco Chronicle: “New York’s coronavirus outbreak has violently erupted over the past few days, and the state is now driving the national epidemic — while on the West Coast, public health experts are wondering if an early and aggressive response saved California from a similar fate.”

“California reported some of the earliest coronavirus cases in the United States in late January. And in the first week of March, California and New York were neck and neck on cases of COVID-19, the disease caused by the coronavirus. But over the past week, New York case counts have doubled every few days, and the state now has 10 times the cases California does: 25,000 to 2,500.”

Washington Post: “The high-stakes theater playing out between Trump and one of his top public health officials underscored a tense dynamic in the White House: a squadron of scientists and health experts — including Birx and infectious disease expert Anthony S. Fauci — caught in an uneasy tug-of-war with Trump as they push a worldview grounded in data and evidence in a West Wing where the president has mused about a ‘miracle’ cure.”

“Trump has increasingly minimized and pushed aside many of the top public health and scientific experts in his administration, instead relying on advice from economic advisers and outside voices in the business community who are urging him to prioritize the nation’s economy above all else.”

New York Times: “For the first time, it is now possible to quantify the cost of the lost weeks, as President Trump was claiming as recently as February that in a ‘couple of days’ the number of cases in the United States ‘is going to be down to close to zero.’”

“Ford’s timeline suggested that if the administration had reacted to the acute shortage of ventilators in February, the joint effort between Ford and General Electric might have produced lifesaving equipment sometime in mid- to late April.”

Prince Charles, the heir to the British throne, has tested positive for the new coronavirus. The prince’s Clarence House office says the 71-year-old is showing mild symptoms of COVID-19 and is self-isolating at a royal estate in Scotland. It says his wife Camilla has tested negative.

The palace says Charles “has been displaying mild symptoms but otherwise remains in good health and has been working from home throughout the last few days as usual.”

“The Department of Homeland Security stopped updating its annual models of the havoc that pandemics would wreak on America’s critical infrastructure in 2017,” Politico reports.

“From at least 2005 to 2017, an office inside DHS, in tandem with analysts and supercomputers at several national laboratories, produced detailed analyses of what would happen to everything from transportation systems to hospitals if a pandemic hit the United States.”

“But the work abruptly stopped in 2017 amid a bureaucratic dispute over its value, two of the former officials said, leaving the department flat-footed as it seeks to stay ahead of the impacts the COVID-19 outbreak is having on vast swathes of the U.S. economy.”

Sen. Chuck Schumer (D-N) tells Politico he secured a provision in the economic stimulus agreement “that will prohibit businesses controlled by the President, Vice President, Members of Congress, and heads of Executive Departments from receiving loans or investments from Treasury programs.”

Axios has details of some of the other measures.

A company is analyzing phone GPS location data to create a Social Distancing Scoreboard that grades, county by county, which residents are changing their behavior. The scorecard uses the reduction in the total distance users travel as an index for whether we’re staying in one place.

Geoffrey Fowler: “Efforts to track public health during the coronavirus pandemic are a reminder of the many ways phones reveal our personal lives, both as individuals and in the aggregate. Unacast’s location data comes from games, shopping and utility apps that tens of millions of Americans have installed on their phones — information the company normally analyzes for retailers, real estate firms and marketers. It’s part of a shadowy world of location tracking that consumers often have little idea is going on.”

President Trump has in recent days criticized how China handled the coronavirus outbreak, saying that the “world is paying a very big price for what they did,” CNN reports.

But as the virus spread rapidly across China in the month of February, Trump repeatedly praised Chinese President Xi Jinping’s response to the crisis, saying he’s handled it “really well” and that he was doing “a very good job with a very, very tough situation.”

Washington Post: “A mad scramble for masks, gowns and ventilators is pitting states against each other and driving up prices. Some hard-hit parts of the country are receiving fresh supplies of N95 masks, but others are still out of stock. Hospitals are requesting donations of masks and gloves from construction companies, nail salons and tattoo parlors, and considering using ventilators designed for large animals because they cannot find the kind made for people.”

“The market for medical supplies has descended into chaos… They are begging the federal government to use a wartime law to bring order and ensure the United States has the gear it needs to battle the coronavirus. So far, the Trump administration has declined.”

President Trump responded sarcastically to reports that Sen. Mitt Romney (R-UT) tested negative for the coronavirus: “This is really great news! I am so happy I can barely speak. He may have been a terrible presidential candidate and an even worse U.S. Senator, but he is a RINO, and I like him a lot!”

“California Gov. Gavin Newsom said that the state has seen one million unemployment claims in less than two weeks as the coronavirus pandemic has led to businesses being shutdown across the state,” CNBC reports.

“Newsom’s announcement comes one day before a key national data release on new jobless claims for the United States, which some have projected to be in the multi-millions. The initial claims data has never before surpassed 1 million, and it was 285,000 last week.”

Los Angeles Mayor Eric Garcetti “also rebuffed President Trump’s earlier comments that he wanted to quickly ease restrictions and said that Angelenos should be ‘prepared for a couple months like this,” the Los Angeles Times reports.

Said Garcetti:”I know that everybody is hopeful, and some are putting out that hope of us being back in churches by Easter or synagogues by Passover or restarting the economy in a couple weeks. I think we owe it to everybody to be straightforward and honest. We will not be back to … that level of normal in that short period of time.”

According to Der Spiegel, the G7 foreign ministers haven’t been able to agree on a joint statement on the coronavirus because of Secretary of State Mike Pompeo’s insistence that they call it the “Wuhan virus.”

“A compilation video of mayors lambasting people for flouting coronavirus quarantine rules has struck a chord with Italians, who have shared it in their thousands on social media,” The Guardian reports.