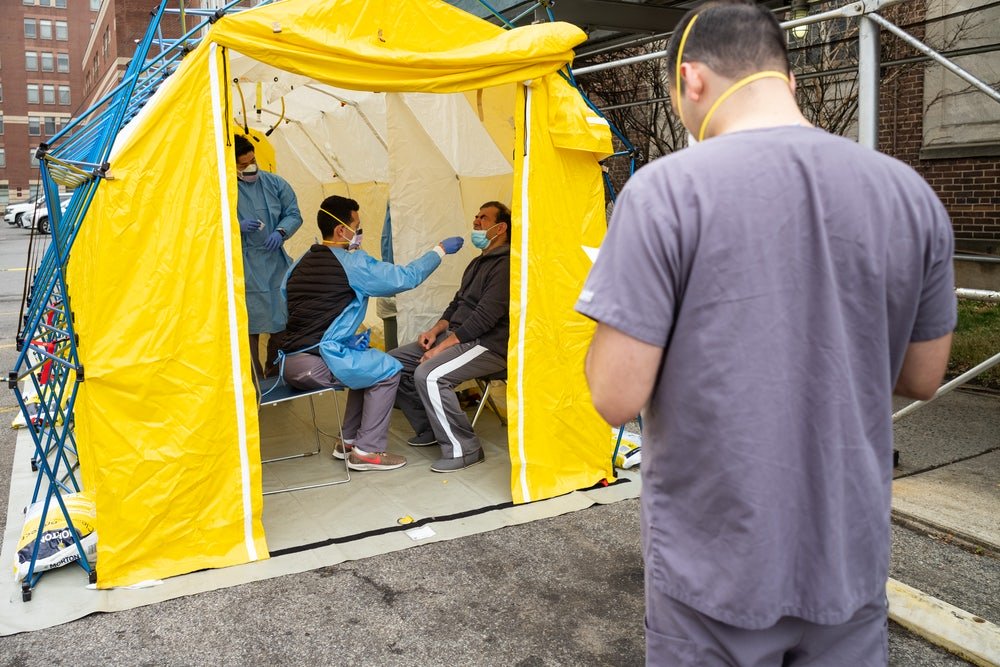 “Senate leaders and the Trump administration clinched a bipartisan deal early Wednesday morning on a nearly $2 trillion emergency relief package in response to the coronavirus pandemic, a move intended to assist businesses and millions of Americans amid an unprecedented halt in the U.S. economy,” Politico reports.

“The announcement, which came around 1 a.m., capped five days of tense, marathon talks.”

New York Times: “In the final measure, lawmakers agreed to a significant expansion of unemployment benefits that would extend unemployment insurance by 13 weeks and include a four-month enhancement of benefits, officials familiar with the unfinished agreement said. Democrats said that it would allow workers to maintain their full salaries if forced out of work as a result of the pandemic.”

Washington Post: “The delay in finalizing a deal came, in part, because aides launched a painstaking scrub of the bill’s text, to make sure that one of the most ambitious pieces of legislation ever attempted by Congress — thrown together in little over a week — actually said what lawmakers wanted it to say.”

President Trump says he wants the “country opened” by Easter, despite warnings from public health experts about coronavirus outbreak, the Washington Post reports.

“Trump said during a Fox News interview that he is worried that federal guidelines for social distancing, including the closure of some businesses, and other steps to mitigate the outbreak could go too far, despite warnings from public health experts that the restrictions may need to stay in place for weeks.”

“Congressional negotiators signaled Tuesday morning that they are likely hours away from clinching a bipartisan agreement on a nearly $2 trillion emergency stimulus package to confront the economic impacts of the coronavirus pandemic — capping five days of frenetic talks that have consumed a mostly empty Capitol,” Politico reports.

“The White House has agreed to allow enhanced scrutiny over a massive loan program that is a centerpiece of the Senate’s $2 trillion coronavirus economic package, taking steps to address a major Democratic concern and potentially pave the way for a vote by Tuesday night,” the Washington Post reports.

“President Trump has already said where he wants some of the money to go, promising assistance to cruise ship companies, for example, that have operations in Miami. And when he was asked Monday evening who would perform oversight of the program, Trump responded, ‘I’ll be the oversight.’”

“But during closed-door negotiations on Capitol Hill, White House officials have agreed to allow an independent inspector general and an oversight board to scrutinize the lending decisions.”

Speaker Nancy Pelosi (D-CA) said she’s hopeful Congress can reach a deal a massive coronavirus relief package by day’s end, but warned that Republican “poison pills” could gum up the process and prompt House Democrats to move their own legislation, The Hill reports.

“U.S. stocks rallied sharply Tuesday, with the Dow surging to its biggest one-day gain in more than 85 years on signs that lawmakers and the Trump administration were nearing a deal on a giant stimulus package aimed at limiting the economic fallout of the coronavirus pandemic,” the Wall Street Journal reports.

Washington Post: “The massive stimulus is designed to be a lifeline to Americans and their employers until the coronavirus is brought under control and the country returns to some semblance of normalcy. The Federal Reserve signaled the gravity of the situation Monday when, in an unprecedented move, said it would spend whatever it takes to preserve the U.S. financial system.”

“Gov. Andrew Cuomo, who last week adopted a friendly tone toward President Trump, got as close as he has to chastising the federal government, which has so far sent 400 ventilators to New York City,” the New York Times reports.

Cuomo said the rate of new coronavirus infections in New York is doubling about every three days: “We haven’t flattened the curve. And the curve is actually increasing.”

“As the coronavirus threatens to spread across the Lynchburg region, Liberty University officials are preparing to welcome back up to 5,000 students from spring break this week,” the Lynchburg News & Advance reports.

“Defying a national trend of campus closures, President Jerry Falwell Jr. has invited students to return to residence halls and has directed faculty members to continue to report to campus even as most classes move online.”

Said Falwell: “I think we have a responsibility to our students — who paid to be here, who want to be here, who love it here — to give them the ability to be with their friends, to continue their studies, enjoy the room and board they’ve already paid for and to not interrupt their college life.”

“The coronavirus pandemic that’s spread to nearly every country in the world is picking up pace, the World Health Organization said Monday, as global cases eclipsed 350,000 and deaths soared past 15,000,” CNBCreports.

Said WHO Director-General Tedros Adhanom Ghebreyesus: “The pandemic is accelerating.”

Reuters reports the WHO was seeing a “very large acceleration” in coronavirus infections in the United States which had the potential of becoming the new epicenter.

“Mortgage companies are bracing for a severe cash crunch when Americans who lose jobs and income because of the coronavirus pandemic stop making payments on their home loans,” the Wall Street Journal reports.

“President Trump has praised Dr. Anthony S. Fauci as a ‘major television star.’ He has tried to demonstrate that the administration is giving him free rein to speak. And he has deferred to Dr. Fauci’s opinion several times at the coronavirus task force’s televised briefings,” the New York Timesreports.

“But Dr. Fauci, the director of the National Institute of Allergy and Infectious Diseases since 1984, has grown bolder in correcting the president’s falsehoods and overly rosy statements about the spread of the coronavirus in the past two weeks — and he has become a hero to the president’s critics because of it. And now, Mr. Trump’s patience has started to wear thin.”

“So has the patience of some White House advisers, who see Dr. Fauci as taking shots at the president in some of his interviews with print reporters while offering extensive praise for Mr. Trump in television interviews with conservative hosts.”

“The National Rifle Association is cutting salaries by 20% across the board and laying off an unspecified number of employees amid a plunge in fundraising during the coronavirus crisis,” the Wall Street Journal reports.

“Gaynor said triggering the act would help access ‘about 60,000 test kits,’ and added that the administration would insert ‘DPA language’ into the mass contracts for the federal government’s order of 500 million personal protective masks.”

Tom Inglesby, the director of the Center for Health Security at Johns Hopkins Bloomberg School of Public Health, warned against ending social distancing as President Trump suggested at his daily briefing.

Said Inglesby: “Anyone advising the end of social distancing now, needs to fully understand what the country will look like if we do that. Covid would spread widely, rapidly, terribly, could kill potentially millions in the year ahead with huge social and economic impact across the country.”

“Major U.S. airlines are drafting plans for a potential voluntary shutdown of virtually all passenger flights across the U.S., as government agencies also consider ordering such a move and the nation’s air-traffic control system continues to be ravaged by the coronavirus contagion,” the Wall Street Journal reports.

“No final decisions have been made by the carriers or the White House, these officials said. As airlines struggle to keep aircraft flying with minimal passengers, various options are under consideration.”

Texas Lt. Gov. Dan Patrick (R), chiming in to support President Trump’s new focus on the economy over fierce warnings from public health officials, suggested that he would rather die from the rapid spread of the novel coronavirus than see instability in the American economic system, the Texas Tribune reports.

Said Patrick: “No one reached out to me and said, ‘As a senior citizen, are you willing to take a chance on your survival in exchange for keeping the America that all America loves for your children and grandchildren?’ And if that’s the exchange, I’m all in.”

He added: “I want to, you know, live smart and see through this, but I don’t want to see the whole country to be sacrificed, and that’s what I see.”

Veteran International Olympic Committee member Dick Pound told USA Today that the 2020 Tokyo Olympic Games are going to be postponed, likely to 2021, with the details to be worked out in the next four weeks.

Playbook notes that Rep. Mark Meadows (R-NC) is currently serving as acting White House chief of staff while he still holds his seat as a member of Congress.

Ben Williamson, his chief of staff, said that Meadows “is still transitioning, not collecting pay from the White House, and will be resigning his seat before the end of the month.”

A reminder of Article I, Section 6 of the U.S. Constitution: “No Senator or Representative shall, during the time for which he was elected, be appointed to any civil office under the authority of the United States.”

Indian Prime Minister Narendra Modi announced a “total lockdown” in the country of 1.3 billion people during a televised address Tuesday night, the most extensive stay-at-home order yet in the world’s fight against the coronavirus pandemic, CNBC reports.