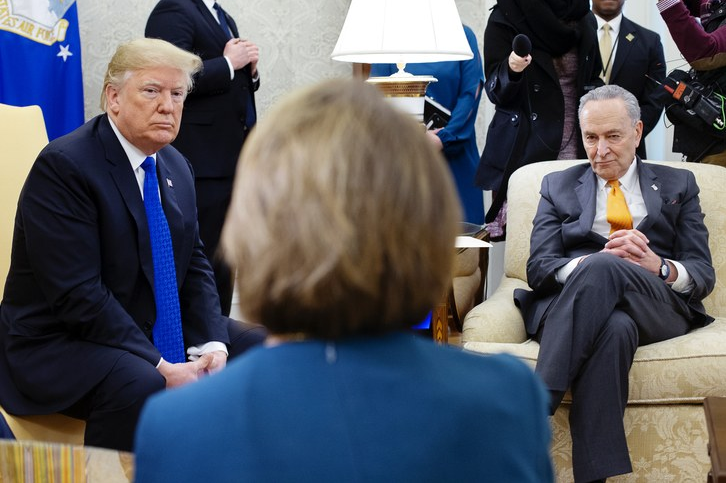 Every Senate Democrat voted against Mitch McConnell’s rushed-through, Republican-written corporate bailout plan for coronavirus stimulus. The procedural cloture vote failed 47-47 (McConnell voted against it for procedural reasons, so he can bring the cloture back up later). Even Democratic Sen. Joe Manchin got salty over how bad this bill is. Not one known for his liberal thinking, Manchin blasted the Republican bill. “They’re throwing caution to the wind for average workers and people on Main Street and going balls to the wall for people on Wall Street.”

There is a raft of problems with the Republican bill, starting with the now mind-blowing $500 billion corporate slush fund that has almost no strings attached and almost nothing to help the workforce of those companies. The Republican bill doesn’t even have money for state and local governments, or for increased food assistance under SNAP, no OSHA language to protect workers, no expanded emergency leave, and an inadequate 3 month extension on unemployment insurance. What is particularly galling for Democrats is that the language gives Treasury Secretary Steven Mnuchin effective carte blanche for distributing funds and hiding who those funds go to.

House Speaker Nancy Pelosi is moving forward swiftly with a counter proposal, with the House Appropriations Committee currently compiling language already developed by Financial Services, Ways and Means, Energy and Commerce and Education and Labor committees. The text could be ready as early as Monday, which should force McConnell to finally work with Democrats to improve the bill and get something both chambers can agree to. The unanimous Democratic opposition to the Republican bill gives Pelosi that leverage.

“The breakdown leaves Congress’ response to the unfolding national crisis uncertain, though all sides vowed to continue working.”

Earlier from Andrew Taylor: “There is a truism about Congress that you have to have the bad meeting before you have the good meeting. I wouldn’t be surprised if that’s what happens today when the big four convene.”

“U.S. stock futures opened sharply lower on Sunday night as Wall Street waits on Washington to agree to an economic stimulus and rescue plan to combat the giant economic blow from the coronavirus outbreak,” CNBCreports.

“Dow Jones Industrial Average futures fell more than 900 points, or 5%, to hit their ‘limit down’ level.”

“The American disease expert, a medical epidemiologist embedded in China’s disease control agency, left her post in July… The first cases of the new coronavirus may have emerged as early as November, and as cases exploded, the Trump administration in February chastised China for censoring information about the outbreak and keeping U.S. experts from entering the country to help.

John Gruber: “It’s not ‘playing politics’ to point this stuff out regarding the Trump administration’s response to COVID-19. It is essential that we, collectively, see that Trump is temperamentally unfit for the office.”

Illinois Gov. J.B. Pritzker told CNN that inaction by the federal government has forced state governments to compete “against each other” for coronavirus supplies.

Said Pritzker: “We’re all competing against each other. This should have been a coordinated effort by the federal government and the National Defense Authorization that the president has to essentially push this manufacturing, really hasn’t gone into effect in any way… It’s a wild West out there. And, indeed, we are overpaying, I would say, for because of that competition.”

“Because of Trump’s negligence, the United States lost two months of response time — precious days that should have been used to test the population, produce more N95 masks and ventilators, and build more hospital beds. This past week, the Pentagon finally announced that a Navy hospital ship would be heading to New York — but it will take at least two weeks to get ready. Why wasn’t the deployment order given sooner? Even now, with the crisis upon us, Trump hesitates to use his full authority to order wartime production of ventilators needed to keep thousands of patients alive.

“Utterly lacking in empathy, Trump is incapable of rallying a shell-shocked nation. When asked on Friday, ‘What do you say to Americans who are watching you right now who are scared?,’ Trump launched into a tirade against the reporter who asked the question. Like the snake-oil salesman that he is, his version of reassurance is to tout miracle cures that have not been verified by medical science…

“There were many reasons Trump won. Ironically, one of the most oft-cited was the desire to blow everything up, because Trump voters were convinced that things couldn’t get any worse than they were in 2016. As they shelter in their homes and the economy grinds to a halt, I wonder if perhaps they now realize how good they had it under President Barack Obama?

“For the past three years, Trump supporters have scoffed at critics, claiming we are out-of-touch, pointy-headed, coastal elitists too focused on Trump’s unconventional way of speaking while ignoring his historic policy achievements — meaning an expanding economy that he inherited from Obama. Perhaps they would like to rethink that argument now that the stock market has given up all of the gains it made under Trump and the unemployment numbers are heading for Great Depression levels? …

“I knew he would be a bad president — but even I didn’t expect him to be Herbert Hoover-level bad. In a way, you almost can’t blame Trump for his epic incompetence: He is who he is. He didn’t deceive anyone. I blame the voters who elected him — and the senators who refused to impeach him. They should have known better. Because they didn’t, we will all pay a fearful price.”

“Oscar-winning movie producer Harvey Weinstein, now one of New York’s most notorious prison inmates after being sentenced for sexual assault, has tested positive for the COVID-19 virus,” the Niagra Gazette reports.

Sen. Rand Paul (R-KY) is the first senator to test positive for coronavirus. Paul tweeted that he is asymptomatic and was tested “out of an abundance of caution due to his extensive travel and events. He was not aware of any direct contact with any infected person.”

Axios: “Paul was the only senator to vote against a bipartisan $8 billion deal to provide emergency coronavirus funding earlier this month.” Karma is a bitch.

Vice President Mike Pence has tested negative for the novel coronavirus, a spokesperson said on Saturday. Pence said he elected to test for COVID-19 after a member his office tested positive on Friday.

“Federal Reserve Bank of St. Louis President James Bullard predicted the U.S. unemployment rate may hit 30% in the second quarter because of shutdowns to combat the coronavirus, with an unprecedented 50% drop in gross domestic product,” Bloomberg reports.

Italy banned any movement inside the country in its latest attempt to contain the coronavirus outbreak and reported another 651 fatalities on Sunday, Bloomberg reports.

Said Johnson: “The numbers are very stark, and they are accelerating. We are only a matter of weeks – two or three – behind Italy.”

As of Sunday, 26,747 has tested positive and 340 people had died, according to a Johns Hopkins tracker.

Nearly half the infections were in New York, which has quickly become the epicenter of coronavirus in America, trailed by Washington State and California.

New York Gov. Andrew Cuomo cautioned on Saturday that the high number of cases in the state was due to more tests being done. The state had done 45,000 tests, more than California (23,000) and Washington state (23,000) and more per capita than South Korea or China.

Jeffrey Sprecher, the husband of Sen. Kelly Loeffler (R-GA) and the chairman of the New York Stock Exchange, sold $3.5 million in shares in late February just before the full impact of the new coronavirus became known, CBS News reports.

Dr. Anthony Fauci, the director of the National Institute of Allergy and Infectious Diseases, told the New York Times that he tries to be diplomatic when forced to contradict President Trump on the facts of the coronavirus outbreak.

Margaret Sullivan: “More and more each day, President Trump is using his daily briefings as a substitute for the campaign rallies that have been forced into extinction by the spread of the novel coronavirus.”

“These White House sessions — ostensibly meant to give the public critical and truthful information about this frightening crisis — are in fact working against that end.”

“Rather, they have become a daily stage for Trump to play his greatest hits to captive audience members.”

“Global anxiety over the coronavirus centered on Europe on Saturday, where Italy is bearing the brunt of the pandemic’s unceasing spread. Italian officials announced that 793 people had succumbed to the virus in a single day. The staggering number brought the nation’s total dead to more than 4,800, the most for a single country,” the Washington Post reports.

“As death tolls mount across the continent, Italy has become a symbol of the enormous challenges facing public health authorities in Europe and in the United States, who are struggling to contain the virus.”

“Eleven days into Italy’s nationwide lockdown, which includes travel restrictions and the closure of most stores apart from groceries and pharmacies, the number of confirmed cases still soared, with 6,557 new cases since Friday. Hospitals and morgues were overwhelmed. The government has reported 53,578 total cases, concentrated in the northern part of the country.”