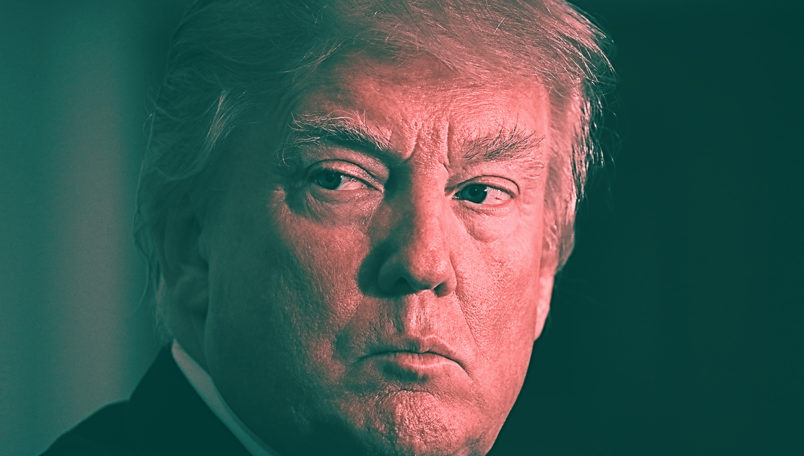 “U.S. intelligence agencies were issuing ominous, classified warnings in January and February about the global danger posed by the coronavirus while President Trump and lawmakers played down the threat and failed to take action that might have slowed the spread of the pathogen,” the Washington Post reports.

“The intelligence reports didn’t predict when the virus might land on U.S. shores or recommend particular steps that public health officials should take, issues outside the purview of the intelligence agencies. But they did track the spread of the virus in China, and later in other countries, and warned that Chinese officials appeared to be minimizing the severity of the outbreak.”

“Taken together, the reports and warnings painted an early picture of a virus that showed the characteristics of a globe-encircling pandemic that could require governments to take swift actions to contain it. But despite that constant flow of reporting, Trump continued publicly and privately to play down the threat the virus posed to Americans.”

“Joe Biden is planning a regular shadow briefing on coronavirus to start as early as Monday to show how he would handle the crisis and address what he calls the lies and failures of President Trump,” Politico reports.

“Biden gave a preview of what’s to come in a conference call with reporters Friday, where he listed a litany of false and misleading statements from Trump, who has been holding regular White House press conferences concerning coronavirus preparedness and response that have been broadcast live on all major networks.”

“The U.S. economy is deteriorating more quickly than was expected just days ago as extraordinary measures designed to curb the coronavirus keep 84 million Americans penned in their homes and cause the near-total shutdown of most businesses,” the Wsshington Post reports.

“The resulting economic meltdown, which is sending several million workers streaming into the unemployment line, is outpacing the federal government’s efforts to respond.”

Wall Street Journal: “The fallout from the coronavirus outbreak is expected to have a significant negative impact on U.S. economic prospects, with predictions emerging for losses of up to five million jobs this year and a drop in economic output of as much as $1.5 trillion.”

“The Trump administration’s top economic adviser estimated that a new financial package being assembled to blunt the economic damage from the coronavirus pandemic would total more than $2 trillion,” the Wall Street Journal reports.

Said Larry Kudlow: “The package is coming in at about 10% of GDP.”

Playbook: “Congress and the Trump administration seem to not care at all about the price tag of legislation — which opens the door for all sorts of interests. We are in the midst of a dramatic expansion of government. Could this be the opportunity to bring back earmarks to help cities and counties rebuild after the coronavirus crisis? This is certain to be in the conversation.”

Mike Allen: “Some readers tell us they think virus coverage has been overly dramatic. So we wanted to share with you the consensus of what the most clear-eyed, serious, optimistic people are saying, as a way to focus our minds.”

“Tens of thousands of Americans die, we have double-digit unemployment for months, countless businesses die, retirements are wiped out, and the nation is saddled with once unimaginable debt.”

“That, folks, is the best case scenario we’re facing.”

“The office said neither President Trump nor Pence had “close contact” with the individual, but the ramifications of the positive testing for the vice president’s office are yet unclear.”

“The Trump administration has issued a Major Disaster Declaration for the state, meaning more federal aid is coming to New York as cases of coronavirus show no sign of abating,” the New York Times reports.

“As of Saturday morning, more than 8,300 New York state residents had tested positive for the virus. With 6 percent of the U.S. population, the state now accounts for nearly half of the 18,000 cases in the country.”

“The designation by the Federal Emergency Management Agency gives New York access to billions of dollars in aid from the Disaster Relief Fund.”

“The Justice Department has quietly asked Congress for the ability to ask chief judges to detain people indefinitely without trial during emergencies — part of a push for new powers that comes as the coronavirus spreads through the United States,” Politico reports.

“The move has tapped into a broader fear among civil liberties advocates and Donald Trump’s critics — that the president will use a moment of crisis to push for controversial policy changes. Already, he has cited the pandemic as a reason for heightening border restrictions and restricting asylum claims.”

“Senate Majority Leader Mitch McConnell (R-KY) established midnight Friday as the deadline for getting a deal on the broad contours of the package as Congress tried to move at ‘warp speed’ amid growing concern about the spread of the coronavirus,” The Hill reports.

“But senators and administration officials emerged from closed-door meetings on Friday night conceding that there were too many unresolved issues and that the talks would carry over into Saturday.”

“At a long-winded White House briefing on Friday, President Trump enthusiastically and repeatedly promoted the promise of two long-used malaria drugs that are still unproven against the coronavirus, but being tested in clinical trials,” the New York Times reports.

“But the nation’s leading infectious disease expert, Dr. Anthony S. Fauci, delicately — yet forcefully — pushed back from the same stage, explaining that there was only anecdotal evidence that the drugs, chloroquine and hydroxychloroquine, may be effective.”

Rachel Maddow suggested President Trump should be taken off the air during the coronavirus pandemic.

Said Maddow: “I know we ought to be getting used to this kind of thing by now, but I’m not. President Trump today, again, just flat-out wrong in public about this malaria drug that has gotten stuck in his mind, quite some distance from the facts.”

She added: “If the president does end up saying anything true, you can run it as tape but if he keeps lying like this every day on stuff this important, all of us should stop broadcasting it. Honestly, it’s gonna cost lives.”

Jennifer Senior: “We may as well be watching newsreels approved by the Soviet Politburo. We’re witnessing the falsification of history in real time. When Donald Trump, under the guise of social distancing, told the White House press corps on Thursday that he ought to get rid of 75 to 80 percent of them — reserving the privilege only for those he liked — it may have been chilling, but it wasn’t surprising. He wants to thin out their ranks until there’s only Pravda in the room.”

“Sometimes, I stare at Deborah Birx during these briefings and I wonder if she understands that this is the footage historians will be looking at 100 years from now — the president rambling on incoherently, vainly, angrily, deceitfully, while she watches, her face stiff with the strangled horror of a bride enduring an inappropriate toast.”

Holman Jenkins: “In our coronavirus quandary, the cure may not only be worse than the disease. The cure is likely no cure at all. We might hold off an expected surge in coronavirus cases for two or three weeks with the kind of extraordinarily destructive economic lockdowns seen in California, New York and elsewhere. But unless warmer weather is coming to our rescue, Americans probably won’t accept the social devastation that would be inflicted by a five-month or 18-month campaign of virus suppression of the sort promoted, variously, by the U.K.’s Imperial College London, Germany’s Robert Koch Institute and other public-health think tanks.”

“Mandatory social distancing might well break down. (Look for speakeasies to re-emerge in New York and other shut-in cities.) The government might well face a choice of coercion or seeing its authority collapse. I’m not being alarmist.”

“This is a lesson the World Health Organization’s Bruce Aylward brought back from Wuhan. People with flu-like symptoms had to be isolated in dormitories, hospitals and stadiums. Asking them to self-isolate voluntarily didn’t work.”

New York Times: “Medical leaders in Washington State, which has the highest number of coronavirus deaths in the country, have quietly begun preparing a bleak triage strategy to determine which patients may have to be denied complete medical care in the event that the health system becomes overwhelmed by the coronavirus in the coming weeks.”

“Fearing a critical shortage of supplies, including the ventilators needed to help the most seriously ill patients breathe, state officials and hospital leaders held a conference call on Wednesday night to discuss the plans… The triage document, still under consideration, will assess factors such as age, health and likelihood of survival in determining who will get access to full care and who will merely be provided comfort care, with the expectation that they will die.”

“Rural hospitals may not be able to keep their doors open as the coronavirus pandemic saps their cash, their CEOs warn, just as communities most need them,” NPR reports.

“Well before the COVID-19 threat, rural health care’s profitability had collapsed nationwide due to a combination of narrowing Medicare reimbursements, a larger share of patients lacking high-paying private insurance and the hollowing out of rural America. Given such pressures, more than 120 rural hospitals have been forced to close over the past decade.”

“The coronavirus crisis has sent U.S.-China relations spiraling, alarming analysts who say the two countries are at their most dangerous point in decades,” Axios reports.

” Seeking to deflect blame for a pandemic that originated within its borders, some Chinese officials and propaganda outlets are pushing a conspiracy theory that the U.S. military planted the virus in Wuhan — a disinformation strategy not seen since at this intensity since the early days of the Cold War.”

“Some U.S. officials, including President Trump, have responded by dubbing the coronavirus a ‘Chinese’ virus, which goes against World Health Organization naming conventions.”

Matthew Yglesias: “The United States is facing an imminent surge in unemployment insurance claims that threatens to completely swamp the system for claiming and paying benefits.”

“The surge is so unprecedented in historical terms that it essentially defies efforts to forecast where the economy may go in the future, and underscores the extent to which the looming coronavirus recession is completely different in its mechanics from the 2008 Great Recession but potentially even more severe in its impact.”