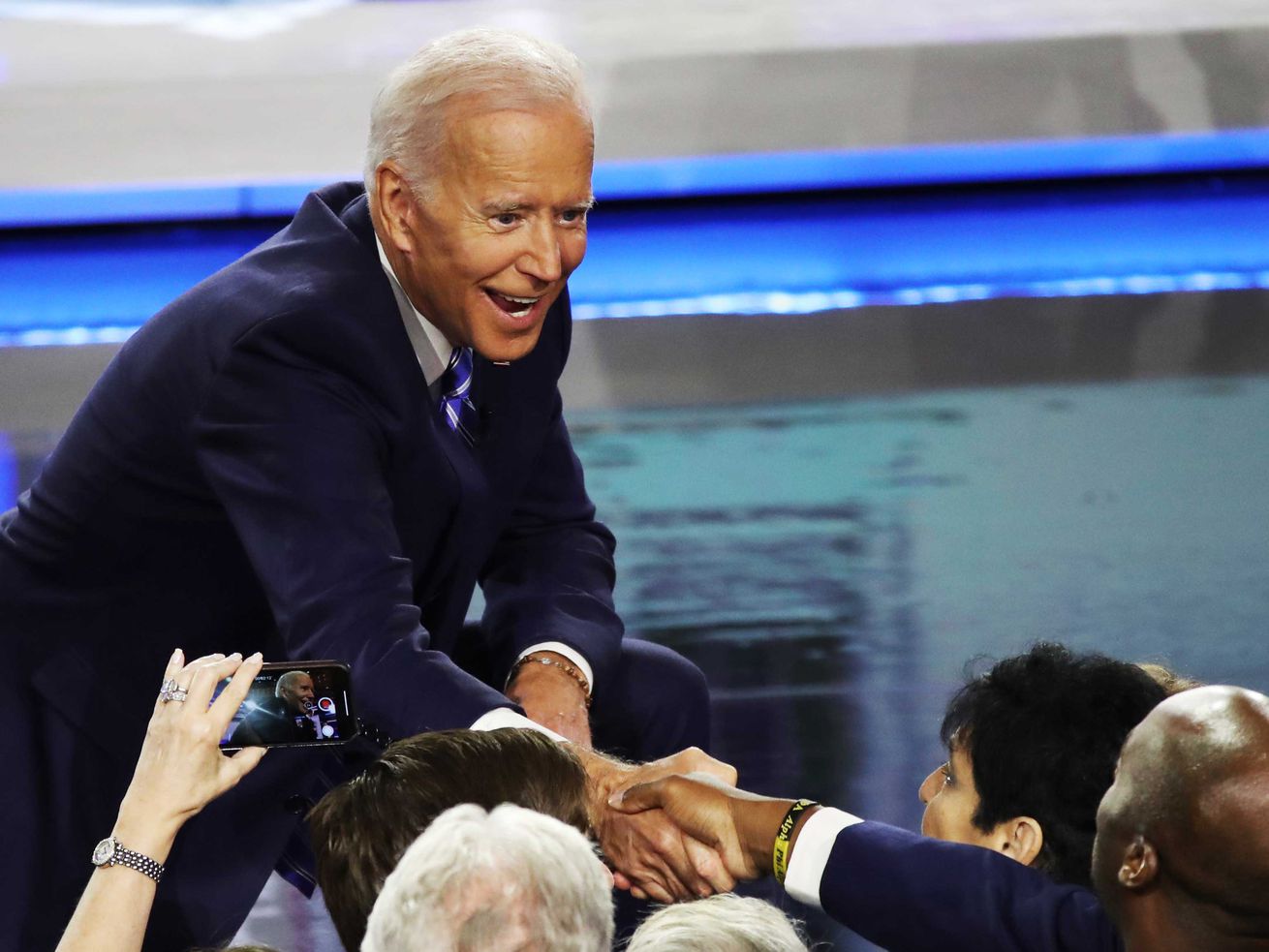 Cook Political Report: “Biden leading the ticket, instead of Sanders, was the first blow for Republicans, making the ties they’d hoped to make between socialism and the Democratic Party much harder. But then came the COVID-19 outbreak. The Trump administration’s slow reaction to manage this health crisis has many Republicans worrying a souring environment will only further endanger already vulnerable GOP senators.”

“One top Republican strategist described it as the ‘perfect storm’ against them. All these things taken together mean that the chances of Democrats taking back the Senate are rising, and is now close to 50-50 odds.

This new ad from a Democratic super PAC is brutal.

Greg Sargent: “The group is set to air digital spots in Pennsylvania, Michigan and Wisconsin — the three ‘blue wall’ states Trump cracked in 2016 — that document an extensive array of times that Trump minimized coronavirus, falsely downplayed the threat it posed and absurdly hyped his own handling of it.”

Sen. Kirsten Gillibrand (D-NY) threw her support behind former Vice President Joe Biden on Thursday, joining a dozen other former competitors to back his bid to become the Democratic nominee for president, the Washington Post reports.

Vox on whether Trump can cancel the election (no he can’t): “The good news is that’s not allowed — or, at least, it’s not allowed unless Congress allows it to happen. A trio of federal laws set Election Day for presidential electors, senators, and US representatives as ‘the Tuesday next after the first Monday in November.’ If Republicans want to change this law, they will need to go through the Democratic House.”

“The 20th Amendment, moreover, provides that ‘the terms of the President and the Vice President shall end at noon on the 20th day of January.’ Thus, even if the election were somehow canceled, Trump and Vice President Mike Pence’s term would still expire as scheduled — although, as explained below, the question of who would succeed them is devilishly complicated.”

“A more realistic threat, as the Nation’s Elie Mystal writes, is that state officials could use the extraordinary powers available to them during a major public health crisis to manipulate who is able to cast a ballot.”

“Sen. Bernie Sanders has convened a series of weighty discussions about the future of his presidential campaign with his closest confidants, and at least three potential paths forward have come up in the private talks,” the Washington Post reports.

“One option that has been raised: keep the campaign technically active with a goal of winning votes and accumulating delegates to the July nominating convention, but forgo attack ads aimed at delegate leader Joe Biden. Another: stay in the race and aggressively compete for the nomination. A third choice: end the campaign.”

New York Times: How it all came apart for Bernie Sanders.

Washington Post: “It turns out that one Silicon Valley megadonor plowed $14.6 million into a super PAC that boosted Sen. Elizabeth Warren (D-Mass.) as she struggled financially toward the tail end of her candidacy.”

“The donor was Karla Jurvetson, a physician and one of Warren’s longtime allies. Her donation made up the vast majority of the $15.1 million the Persist PAC pulled in just 11 days in February.”

Politico: “Joe Biden reached a new and heady milestone when he shellacked Bernie Sanders in Florida, Illinois and Arizona to become the de facto Democratic nominee for president.”

“But there was no soaring speech to acknowledge the moment. He never took the stage amid a sea of Biden signs or before an adoring crowd on national television. Biden was instead stuck in a makeshift studio in his Delaware home, webcasting his remarks with a low-quality personal computer camera against a straight-out-of-YouTube black backdrop and two American flags.”

“On Friday morning, the campaign then laid off hundreds of staffers across the country, including at least several dozen in the New York office who are potentially at risk and are now being asked to finish their employment working from home. While staffers in battleground states have health coverage until the end of April, the dismissed Bloomberg employees in the New York City headquarters will lose health insurance after March 31.”

Per a new FEC filing, Mike Bloomberg spent $936,225,041 on his failed presidential campaign for the Democratic nomination.

New York Times: “In discussions with The Times since Mr. Biden’s big primary victories on Tuesday, 60 Democratic National Committee members and congressional and party leaders most frequently proposed three former rivals of Mr. Biden as his running mate — Senator Kamala Harris of California, Senator Elizabeth Warren of Massachusetts and Senator Amy Klobuchar of Minnesota. Next up was Stacey Abrams, a former state House leader whose defeat in 2018 Georgia governor’s race remains disputed by many in the party.”

A new ABC News-Ipsos poll finds 55% of Americans approve of the President Trump’s management of the coronavirus crisis, compared to 43% who disapprove.  Trump’s approval on this issue is up from last week, when the numbers were nearly reversed.

Jon Meacham: “It will be tempting for leaders in those states and others to postpone their primaries. Instead, in this hour of crisis, state officials — understandably scrambling to secure their people — should do all they can to hold their elections as soon as possible. The legitimacy of the eventual Democratic nominee could depend on it.”

“History is on the side of proceeding in times of uncertainty. There’s something in the American character that has long insisted on pressing ahead with democracy’s fundamental task: the casting of ballots and the choosing of leaders. In addition to the Lincoln example, historians know that James Madison was re-elected amid the War of 1812; the midterm elections of 1814 took place not long after the British had invaded Washington; the 1918 balloting occurred despite the ravages of the Spanish flu; 1932 went forward in the face of the Great Depression; and Franklin Roosevelt was re-elected in 1944, during World War II. Even 9/11 delayed the New York City mayoral election only by a matter of weeks.”