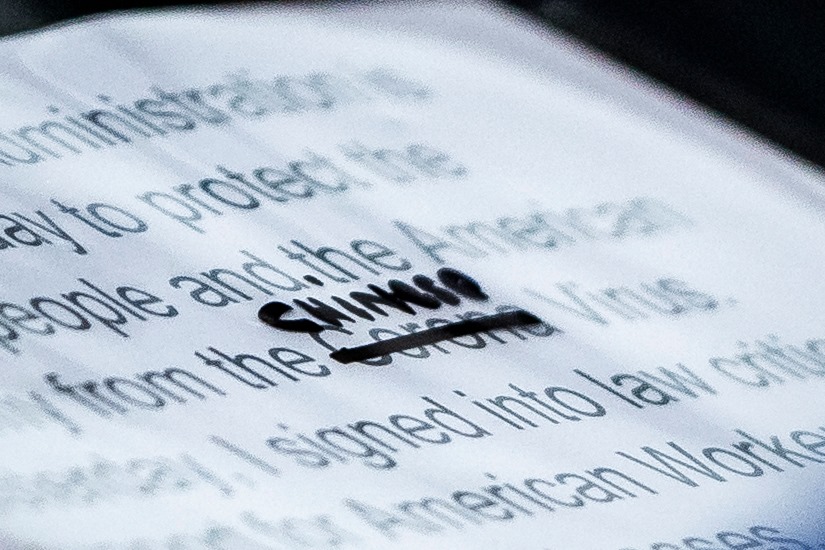 Trump held a doozy of one of his Virus Press Conferences today, where, as you can see above in a close up photo of his notes, he insisted on being racist. You can see he crossed out “Corona” and replaced it with “Chinese” virus, and referred to it as such throughout. So, Trump is a racist, we all knew that. I think he is hoping we are outraged by that rather than his lies and continued incompetence during this crisis. So let’s focus on the latter.

“For about 20 minutes on Thursday, President Trump undermined six decades of dogma on the development of safe and effective drugs,” STAT reports. “Trump, addressing a nation under shelter and quarantine from the coronavirus pandemic, said a new drug for Covid-19, yet to be proved safe and effective, was now ‘approved or very close to approved.’ Another, also not approved for coronavirus, would be ‘available almost immediately,’ in part because using it is ‘not going to kill anybody.’”

“Then, minutes later, the commissioner of the Food and Drug Administration, Stephen Hahn, took the dais in the White House briefing room and delicately walked back each one of Trump’s statements.”

Trump directed governors to obtain the medical equipment they need to fight the coronavirus pandemic, saying the federal government is “not a shipping clerk.” Trump said his administration will “help out wherever we can,” but that acquiring supplies “is really for the local governments, governors and people in the state.” Yesterday, Trump signed an executive order to invoke the Defense Production Act, but tweeted that he’d only use it if needed “in a worst case scenario in the future.” Mike Pence, meanwhile, asked for construction companies to donate their N95 protective masks to local hospitals.

New York Times: “The outbreak of the respiratory virus began in China and was quickly spread around the world by air travelers, who ran high fevers. In the United States, it was first detected in Chicago, and 47 days later the World Health Organization declared a pandemic. By then it was too late: 110 million Americans were expected to become ill, leading to 7.7 million hospitalized and 586,000 dead.”

“That scenario, code-named ‘Crimson Contagion,’ was simulated by the Trump administration’s Department of Health and Human Services in a series of exercises that ran from last January to August.”

“The simulation’s sobering results — contained in a draft report dated October 2019 that has not previously been reported — drove home just how underfunded, underprepared and uncoordinated the federal government would be for a life-or-death battle with a virus for which no treatment existed.”

“The only U.S. drugmaker that makes a potential treatment for the coronavirus that was touted by President Trump raised the price by almost 100 per cent in January, as the virus caused havoc across China,” the Financial Times reports.

“Rising Pharmaceuticals, a New Jersey based company, increased the price of chloroquine — an antimalarial, which is one of the drugs that is being tested against Covid-19 — on January 23, according to data from research firm Elsevier.”

“The State Department is set to announce a Level 4 travel advisory applying to all international travel, its most severe warning,” Politico reports.

“The advisory would instruct all Americans abroad to either return to the United States or prepare to shelter in place, given the global threat of the coronavirus outbreak. Americans also would be instructed not to travel abroad.”

“Senate Republicans unveiled an economic rescue plan that would provide hundreds of billions of dollars worth of loans to big corporations and small businesses, large corporate tax cuts and checks of $1,200 for taxpayers, as well as limits on a paid leave program,” the New York Timesreports.

Washington Post: “The dollar figures had been fluid on Capitol Hill as lawmakers negotiated unusually rapidly to finalize the legislation, and the emerging opposition to the direct payments underscored that key elements of the plan could be very much subject to change — especially since it still must be negotiated with Democrats in both chambers.”

Axios more details of the plan.

ProPublica: “Soon after he offered public assurances that the government was ready to battle the coronavirus, the powerful chairman of the Senate Intelligence Committee, Richard Burr, sold off a significant percentage of his stocks, unloading between $582,029 and $1.56 million of his holdings on Feb. 13 in 29 separate transactions.”

“As the head of the intelligence committee, Burr, a North Carolina Republican, has access to the government’s most highly classified information about threats to America’s security. His committee was receiving daily coronavirus briefings around this time, according to a Reuters story.”

“A week after Burr’s sales, the stock market began a sharp decline and has lost about 30% since.”

“On Thursday, Burr came under fire after NPR obtained a secret recording from Feb. 27, in which the lawmaker gave a VIP group at an exclusive social club a much more dire preview of the economic impact of the coronavirus than what he had told the public.”

Sen. Kelly Loeffler (R-GA) “sold off seven figures worth of stock holdings in the days and weeks after a private, all-senators meeting on the novel coronavirus that subsequently hammered U.S. equities,” the Daily Beast reports. Both Loeffler and Burr must be indicted, convicted and executed.

“All of Georgia’s state lawmakers were urged Wednesday to self-isolate themselves for weeks after a state senator who participated in a Monday vote disclosed he tested positive for the disease caused by coronavirus,” the Atlanta Journal Constitution reports.

“State Sen. Brandon Beach (R) said he was screened for the disease Saturday when he sought medical attention for a cough and mild fever, but that the test results didn’t arrive until Wednesday. In between, the Alpharetta Republican said he felt healthy enough to join dozens of legislators, staff members and reporters for a one-day special legislative session at the Capitol to grant Gov. Brian Kemp broad powers to respond to the pandemic.”

“I’m shaking with rage. We were told if we had symptoms to refrain from going to the Capitol on Monday. Senator Brandon Beach knew he was exhibiting symptoms since MARCH THE 10TH! I have an elderly hospice patient at home. He irresponsibly stayed all day at the Capitol on Monday and exposed all of us.” — Georgia state Rep. Scot Turner (R), on Facebook, after a fellow lawmaker took part in a special session despite showing symptoms of coronavirus.

“U.S. hospitals and medical professionals are asking for $100 billion in direct financial assistance from Congress to respond to the coronavirus pandemic, with some hospitals already running short of supplies for both patients and health care workers in virus hot spots like Seattle,” NBC News reports.

“Members of Congress are pressing to change the rules to allow remote voting during the coronavirus pandemic, despite the resistance from their leaders, signaling that the outbreak sweeping the globe may not only require an unprecedented response from the Capitol but also change the essential nature of how it operates,” CNN reports.

Sen. Lindsey Graham (R-SC) told his Republican colleagues that he is trying to convince President Trump to oppose direct payments to families in the Phase Three Senate bill in response to the coronavirus pandemic, Politico  reports. New White House chief of staff Mark Meadows is also opposed to direct payments.

“China on Thursday reported no new local infections for the first time since the coronavirus crisis began three months ago, reaching a milestone in its battle with the deadly outbreak that has upended daily life and economic activity around the world,” the New York Times reports.

“As governments in Italy, the United States and elsewhere grapple with the pandemic, China has hailed its success as evidence of what can be achieved when a vast, top-down bureaucracy that brooks no dissent is mobilized in pursuit of a single target.”

“Just one day after G7 leaders — including Trump — said they remained ‘committed to the stability of the global economy’ and pledged to ‘coordinate measures and do whatever it takes’ to safeguard economic growth, Washington confirmed it was pressing ahead with tariff hikes on European aircraft to 15 percent, up from 10 percent, starting Wednesday.”

Bloomberg: “For weeks, President Trump has privately rejected proposals from advisers and businesses to cut China tariffs. Companies were hoping to convince him and amped up their call for relief. [On Wednesday], he finally slashed their hopes: ‘There’s no reason to do that.’”

“The coronavirus pandemic is about to test the bounds of how much debt the U.S. government can bear,” the Wall Street Journal reports.

“Even before the crisis hit, the U.S. was on track to increase its budget deficit to nearly $1 trillion in the fiscal year that ends Sept. 30. It was already up to $625 billion in the five months since the current fiscal year began Oct. 1.”

“Now analysts say the deficit will soar well past the record $1.5 trillion hit in 2009, when the U.S. reeled through two years of financial crisis and recession.”

Florida Gov. Ron DeSantis (R) told Fox & Friends that he’s putting an end to spring break revelry in his state with the coronavirus pandemic growing in the country.

Said DeSantis: “The message I think for spring breakers is the party is over in Florida. You’re not going to be able to congregate on any beach in the state. Many of the hot spots that people like to go to, whether it’s Miami beach, Fort Lauderdale and Clearwater Beach are closed entirely for the time being… We would tell those folks maybe come back next year when things are better, but that is not what we’re looking for.”