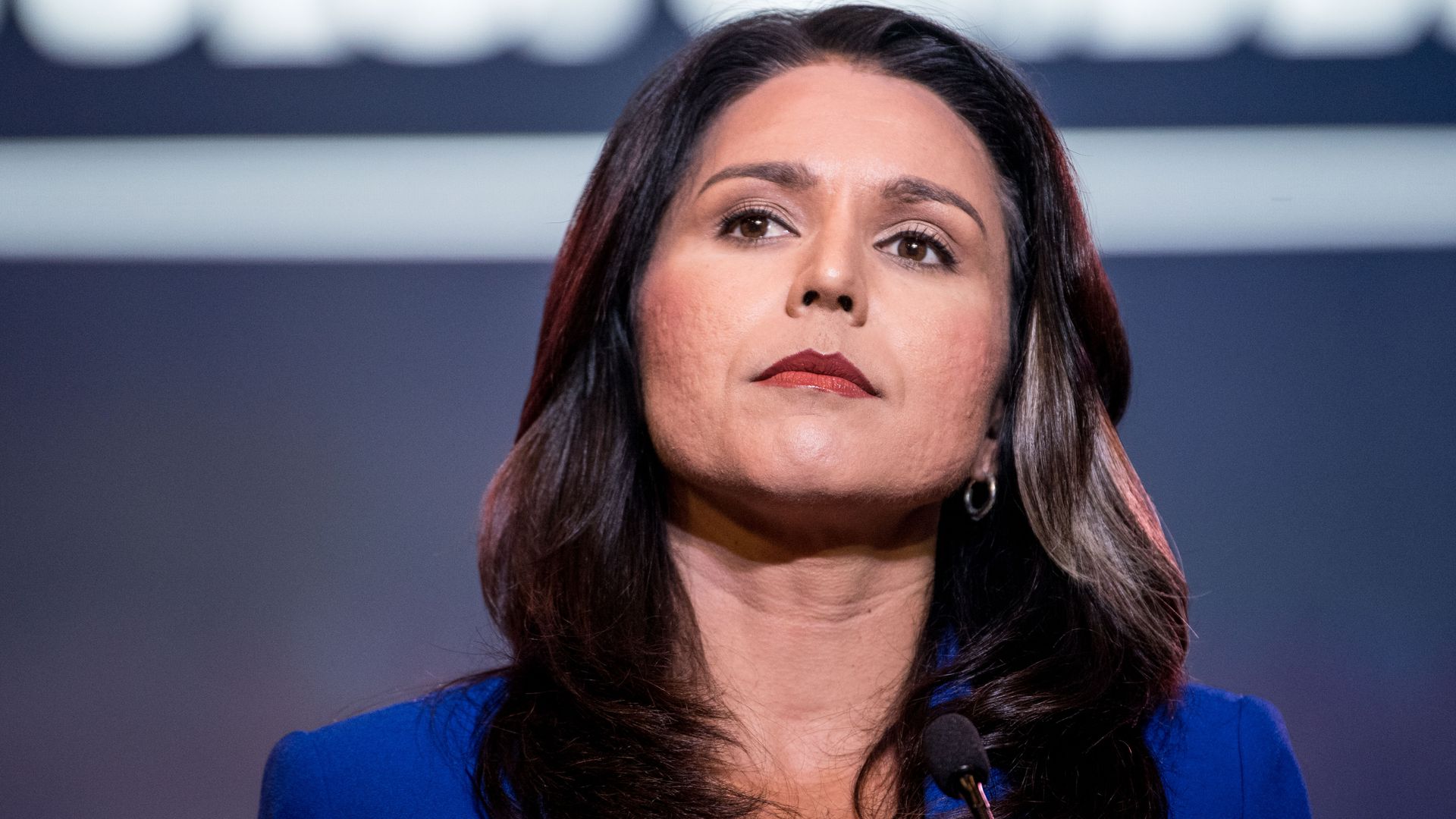 And then there were really two. Rep. Tulsi Gabbard (D-HI) announced that she will suspend her Democratic presidential campaign and endorsed Joe Biden. That latter part is the surprise. Gabbard had been inexplicably a darling of the left and identified as the preferred running mate for Bernie Sanders, both in 2016 and 2020, this despite, or perhaps because of, her support for Putin and Assad. Her hatred of Hillary Clinton and and opposition to Barack Obama and Joe Biden was not hidden during this campaign. And yet she endorsed Biden. Very odd. I suppose she won’t be running third party after all.

From her statement: “I know Vice President Biden and his wife, and I’m grateful to have called his son Beau a friend, who also served in the National Guard. Although I may not agree with the vice president on every issue, I know that he has a good heart and he’s motivated by his love for our country and the American people.”

“I’m confident that he will lead our country guided by the spirit of aloha, respect, and compassion, and thus help heal the divisiveness that has been tearing our country apart,” Gabbard continued. “So today I’m suspending my presidential campaign and offering my full support to Vice President Joe Biden in his quest to bring our country together.”

“Bernie Sanders signaled that he was open to ending his presidential run after another round of landslide losses to Joe Biden, and new signs emerged of communication between the two camps as some Democrats hoped for a swift end to a bruising primary,” the Washington Post reports. “Biden campaign officials have also adopted an internal policy of no longer attacking Sanders.”

Alan Abramowitz: “Based on the results of presidential elections since World War II with running incumbents, a president with an upside-down approval rating and an economy in recession would have little chance of winning a second term in the White House. If President Trump’s net approval rating remains where it is now or declines further, and if the recession is severe, with real GDP shrinking by three points or more in the second quarter, the result could well be a defeat of landslide proportions.”

“A few caveats are in order here. Voters may not hold an incumbent president responsible for a recession brought on by an unforeseeable disaster like the coronavirus pandemic — although they may hold him responsible for the government’s response to the pandemic, which is a story that is still being written.”

Stuart Stevens: “Don’t just blame President Trump. Blame me — and all the other Republicans who aided and abetted and, yes, benefited from protecting a political party that has become dangerous to America. Some of us knew better.”

“But we built this moment. And then we looked the other way.”

“Many of us heard a warning sound we chose to ignore, like that rattle in your car you hear but figure will go away. Now we’re broken down, with plenty of time to think about what should have been done.”

Rep. Don Young (R-AK) told a gathering of senior citizens last week that dangers posed by the coronavirus pandemic — the “beer virus,” he called it — have been overblown due to media-fueled hysteria, the Anchorage Daily News reports.

Said Young: “They call it the coronavirus. I call it the beer virus. How do you like that? It attacks us senior citizens. I’m one of you. I still say we have to as a nation and state go forth with everyday activities.”

Vote him out Alaskans.

Politico: “President Trump’s top political advisers in recent weeks envisioned unleashing a massive advertising campaign against Joe Biden to define him for the general election before he had a chance to recover from the primary. Then the novel coronavirus arrived.”

“With the death toll rising and daily life grinding to a halt, Trump’s sprawling political operation has put on hold any plans to use its nine-figure war chest to unload on the former vice president. The strategy, mimicking the playbook of Barack Obama’s 2012 reelection campaign against Mitt Romney, was aimed at crippling the lesser-funded Biden before he could unify the Democratic Party behind him and marshal his forces for November.”

“The reprieve is a blessing for Biden: Rather than spending valuable time fending off an assault, he is free to present himself as a steady leader amid a national crisis and to regroup for the general election.”

Geise’s entry could change the dynamics of the race between Sen. Steve Daines (R) and Gov. Steve Bullock (D).

Sen. Elizabeth Warren (D-MA) told The View that she’s withholding her presidential endorsement because she is focused on the coronavirus outbreak.

Said Warren: “Actually, I’ve been focused on this crisis… I think Bernie needs space to decide what he wants to do next, and he should be given the space to do that.”

Joshua Green: “The timing of the crisis couldn’t be worse for Trump’s political hopes. Academic research has consistently found that voters judge incumbent presidents based on the state of the economy in an election year—and that their impressions of economic performance solidify over the spring, which means now.”

“That bodes ill for Trump. The force and scale of the crisis, exacerbated by the president’s initial denial and slow federal response, paint an ugly picture of the economic effects soon to come. Forecasters are sharply downgrading growth estimates and expect the brunt of the economic damage to land in the second quarter. In recent days, Morgan Stanley forecast that U.S. gross domestic product would fall 4 percent in the second quarter; Goldman Sachs forecast a 5 percent drop; and Pantheon Macroeconomics, a 10 percent drop.”

Rep. James Clyburn (D-SC), whose endorsement ahead of the South Carolina primary helped fuel Joe Biden’s surge, told the Wall Street Journal that Biden “should incorporate as much of the efforts being proposed by Bernie Sanders as he can.”

Boeing said that former U.N. ambassador Nikki Haley has resigned from its board as she opposes the planemaker’s move to seek financial aid from the federal government amid the 737 MAX and the coronavirus crisis, Reuters reports.

Sen. Sherrod Brown (D-OH) told the Columbus Dispatch that he is worried President Trump will use Ohio’s decision to delay its Tuesday primary due to the coronavirus outbreak as a precedent to ask for the November election to be postponed.

Said Brown: “My concern is that in the age of Trump that other governors might think, or that the president might ask, for a delay in the November election based on something, perhaps this, perhaps something else.”

Again, the date for the general election and the meeting of the electoral college are specifically laid out in the Constitution. Trump cannot postpone them. We have held general elections in times of Civil War, Pandemics, and World War. We will hold a general election on the first Tuesday in November this year too.