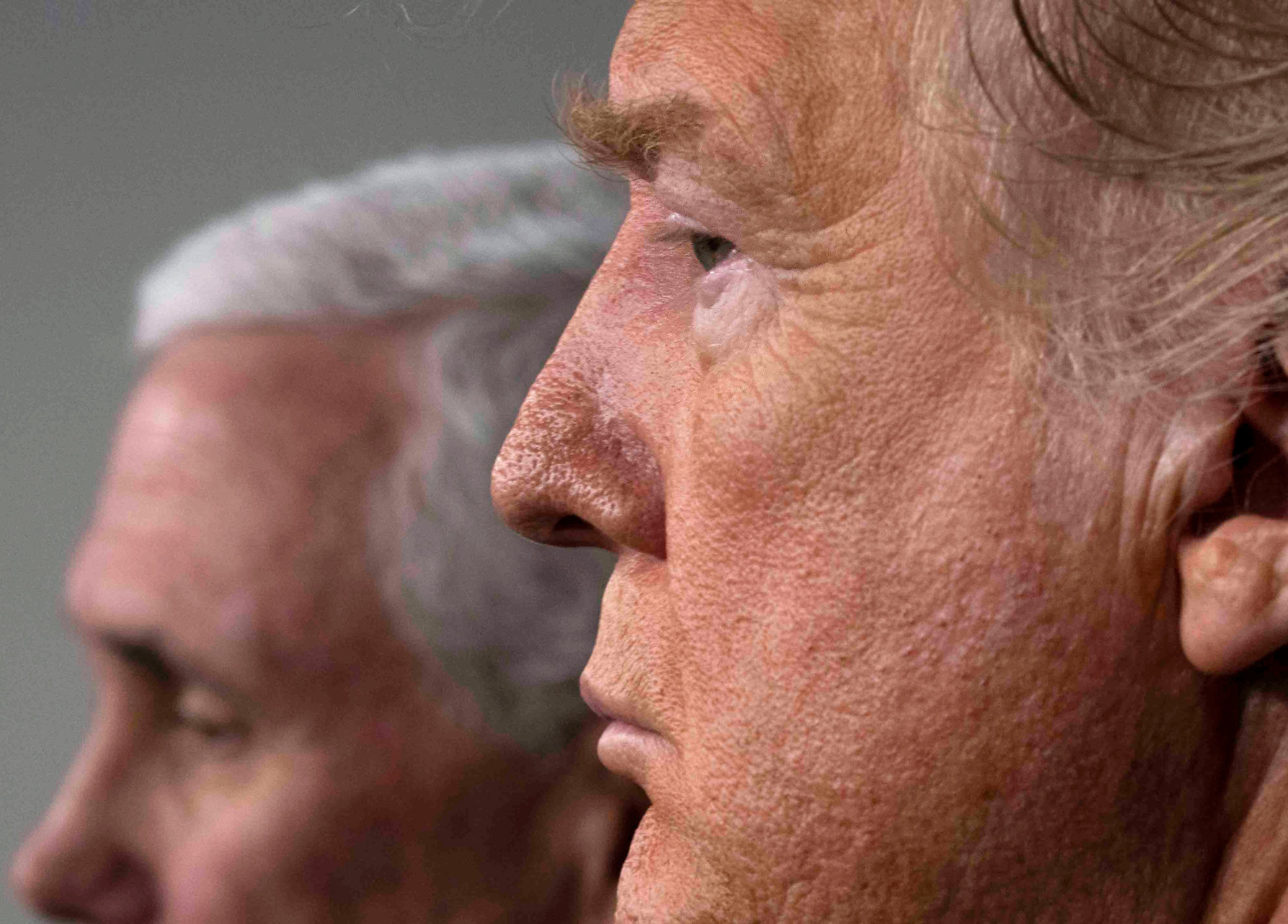 “For weeks, President Trump has minimized the coronavirus, mocked concern about it and treated the risk cavalierly. On Tuesday he took to the White House podium and made a remarkable pronouncement: He knew it was a pandemic all along,” the New York Times reports. Said Trump: “I felt it was a pandemic long before it was called a pandemic.”

No, a mere week ago you told your cult followers at a rally that it was a media and Democratic hoax.

“The government’s economic stimulus is set to quickly balloon into trillion-dollar territory in the coming days, the largest rescue in modern American history, as major industries flood the Trump administration and Capitol Hill for aid while huge swaths of the economy stall from the coronavirus crisis,” Politico reports.

“Treasury Secretary Steven Mnuchin will meet with Senate Republicans behind closed doors on Tuesday to present lawmakers with options for aid to airlines, hotels, casinos and small-to-medium-sized businesses.”

Playbook: “This is a recognition of a few realities: Number one, the administration’s initial cure for the melting economy — a payroll tax cut — would not take hold quickly enough, and faced uncertain prospects on Capitol Hill. Number two: Republican senators like Mitt Romney of Utah and Tom Cotton of Arkansas support direct payments to taxpayers, suggesting the GOP will go along. And number three: This is, theoretically, a way to bring Republicans and Democrats together quite quickly. Mnuchin suggested the checks would be means-tested — he said people making $1 million a year would not get a check.”

“Sweeping new federal recommendations announced on Monday for Americans to sharply limit their activities appeared to draw on a dire scientific report warning that, without action by the government and individuals to slow the spread of coronavirus and suppress new cases, 2.2 million people in the United States could die,” the New York Timesreports.

“To curb the epidemic, there would need to be drastic restrictions on work, school and social gatherings for periods of time until a vaccine was available, which could take 18 months, according to the report, compiled by British researchers. They cautioned that such steps carried enormous costs that could also affect people’s health, but concluded they were ‘the only viable strategy at the current time.’”

Washington Post: “Nearly eight weeks after the first coronavirus case was reported in the United States, Trump conveyed that he at last recognizes the magnitude of the crisis that is threatening lives across the nation, disrupting the economy and fundamentally upending the daily rhythms of American life.”

Jared Kushner’s “early involvement with dealing with the virus was in advising the president that the media’s coverage exaggerated the threat,” the New York Times reports.

Also interesting: “It explains how Mr. Trump could announce he was dismissing his acting chief of staff as the crisis grew more severe, creating even less clarity in an already fractured chain of command. And it was a major factor in the president’s reluctance to even acknowledge a looming crisis, for fear of rattling the financial markets that serve as his political weather vane.”

Associated Press: “The shift was informed in part by a growing realization within the West Wing that the coronavirus crisis is an existential threat to Trump’s presidency, endangering his reelection and his legacy.”

“Trump has told advisers that he now believes the virus will be a significant general election issue and he took note of the clear-eyed, somber tone used by his likely general election foe, Joe Biden, in Sunday’s Democratic debate.”

New York City Mayor Bill de Blasio said that New Yorkers should prepare for a “shelter-in-place” order in the coming days as local officials try to contain the fast-moving coronavirus, CNBC reports. A decision will be made in the next 48 hours.

Politico: “The briefing was intended to hammer home a new, terrifying reality facing the Trump administration, and the incoming president’s responsibility to protect Americans amid a crisis. But unlike the coronavirus pandemic currently ravaging the globe, this 2017 crisis didn’t really happen — it was among a handful of scenarios presented to Trump’s top aides as part of a legally required transition exercise with members of the outgoing administration of Barack Obama.”

“And in the words of several attendees, the atmosphere was ‘weird’ at best, chilly at worst.”

A video has emerged of Donald Trump talking about cutting the US pandemic response team in 2018 – days after claiming that he knew nothing about the disbanded White House unit, the Independent reports.

Trump said of the pandemic team that “some of the people we’ve cut they haven’t been used for many, many years and if we ever need them we can get them very quickly and rather then spending the money.”

“The U.S. government will postpone the April 15 tax-payment deadline for millions of individuals, giving Americans another 90 days to pay their 2019 income-tax bills in an unprecedented move,” the Wall Street Journal reports.

Neil Irwin: “That relationship, between spending and income, consumption and production, is at the core of how a capitalist economy works. It is the basis of a perpetual motion machine. We buy the things we want and need, and in exchange give money to the people who produced those things, who in turn use that money to buy the things they want and need, and so on, forever.”

“What is so deeply worrying about the potential economic ripple effects of the virus is that it requires this perpetual motion machine to come to a near-complete stop across large chunks of the economy, for an indeterminate period of time.”

“No modern economy has experienced anything quite like this. We simply don’t know how the economic machine will respond to the damage that is starting to occur, nor how hard or easy it will be to turn it back on again.”

Axios: “Economists have removed their rose-colored glasses in recent weeks and are beginning to price in scenarios for the world that are as bad or much worse than the global financial crisis.”

“As the coronavirus has worsened, members of the task force President Trump has assigned to combat the pandemic have reached out to prominent conservative social-media ‘influencers’ and right-wing TV and radio stars to offer them private briefings and information sessions with Vice President Mike Pence and other top administration officials,” the Daily Beast reports.

“For weeks, some of Fox News’s most popular hosts downplayed the threat of the coronavirus, characterizing it as a conspiracy by media organizations and Democrats to undermine President Trump,” the Washington Post reports. “But that was then.”

“With Trump’s declaration on Friday that the virus constitutes a national emergency, the tone on Fox News has quickly shifted.” “On his program on Friday, Hannity — the most watched figure on cable news — lauded the president’s handling of what the host is now, belatedly, referring to as a ‘crisis.’”

Vanity Fair: “Tucker Carlson started talking more extensively about the virus on his Fox News show on February 3, spurred, he says, by harrowing reports emerging from China. Trump, it seems, was the last to know. A White House adviser arranged for Carlson to meet with Trump so the TV personality could, in essence, penetrate Trump’s bubble. They talked for two hours. The oncoming pandemic, Carlson told him, was an existential threat to the nation. To translate it into Trumpian language, an existential threat to his reelection. Mike Pence joined at one point.”

“Carlson won’t discuss the president’s reaction on the record, but suffice it to say that Trump’s denial went on for another week while the pandemic ballooned and right-wing allies—many of them on Fox News—suggested the virus was a liberal hoax and members of Congress, as recently as three days ago, told people to continue going out in public as if nothing was happening.”

Convicted Ex-Rep. Duncan Hunter (R-CA) was sentenced on Tuesday to 11 months in prison with three years of supervised probation after he pleaded guilty to a single corruption charge, NBC San Diego reports.

“Iran issued its most dire warning yet Tuesday about the outbreak of the new coronavirus ravaging the country, suggesting ‘millions’ could die in the Islamic Republic if the public keeps traveling and ignoring health guidance,” the AP reports.

“A state television journalist who also is a medical doctor gave the warning only hours after hard-line Shiite faithful the previous night pushed their way into the courtyards of two major shrines that had just been closed over fears of the virus. Meanwhile, Iran’s supreme leader issued a religious ruling prohibiting ‘unnecessary’ travel in the country.”

The Chinese government announced that it will revoke press credentials for American journalists who work for the New York Times, Washington Post and Wall Street Journal in retaliation for restrictions that the Trump administration placed on Chinese state media outlets operating in the U.S., Axios reports.

Washington Post: “Inside the Republican Party and the conservative movement that Trump commands, there is now a deep divide as the nation confronts the coronavirus. For weeks, many on the right, including Trump, minimized the virus, if they considered it at all. Even in recent days, as much of the world shuts down to try to stop its spread, some Republicans mocked what they saw as a media-generated frenzy.”

“Their reaction reflected how the American right has evolved under Trump, moving from a bloc of small-government advocates to a grievance coalition highly skeptical of government, science, the news and federal warnings.”

“Their conspiratorial unrest is particularly acute within right-wing media, where Fox Business removed a prime-time anchor for casting the coronavirus as ‘another attempt to impeach the president.’ Other right-wing personalities continue to call the coronavirus a ‘hoax’ or falsely blame George Soros, the billionaire investor and liberal donor, for causing it.”

“But conservatives and Republicans now face an undeniable reality as the pandemic’s death count here and abroad climbs — and the worldwide reach of the coronavirus defies the bounds of political debate.”

“The Federal Reserve announced Tuesday that it will try to keep credit flowing to households and businesses by buying up commercial paper, short term promissory notes companies use to fund themselves,” the New York Times reports.

Wall Street Journal: “The Fed can’t lend directly to households and businesses, but it can invoke emergency powers to establish lending facilities that can, in turn, extend credit.”

“The Democratic-led House scaled back a paid-leave program that the chamber had tried to enact days earlier, following pressure from businesses worried about financial burdens from the sweeping bill in response to the coronavirus crisis,” the Wall Street Journal reports.

“In revised legislation that Democratic leaders billed as a technical correction, but represented a significant rewrite, the House modified a program aimed at providing paid leave to people affected by the coronavirus. The new measure would still provide two weeks of sick leave to a wide swath of workers affected by the pandemic, including those who are in quarantine, caring for family members with Covid-19, and those who have children whose schools or day-care centers have closed.”