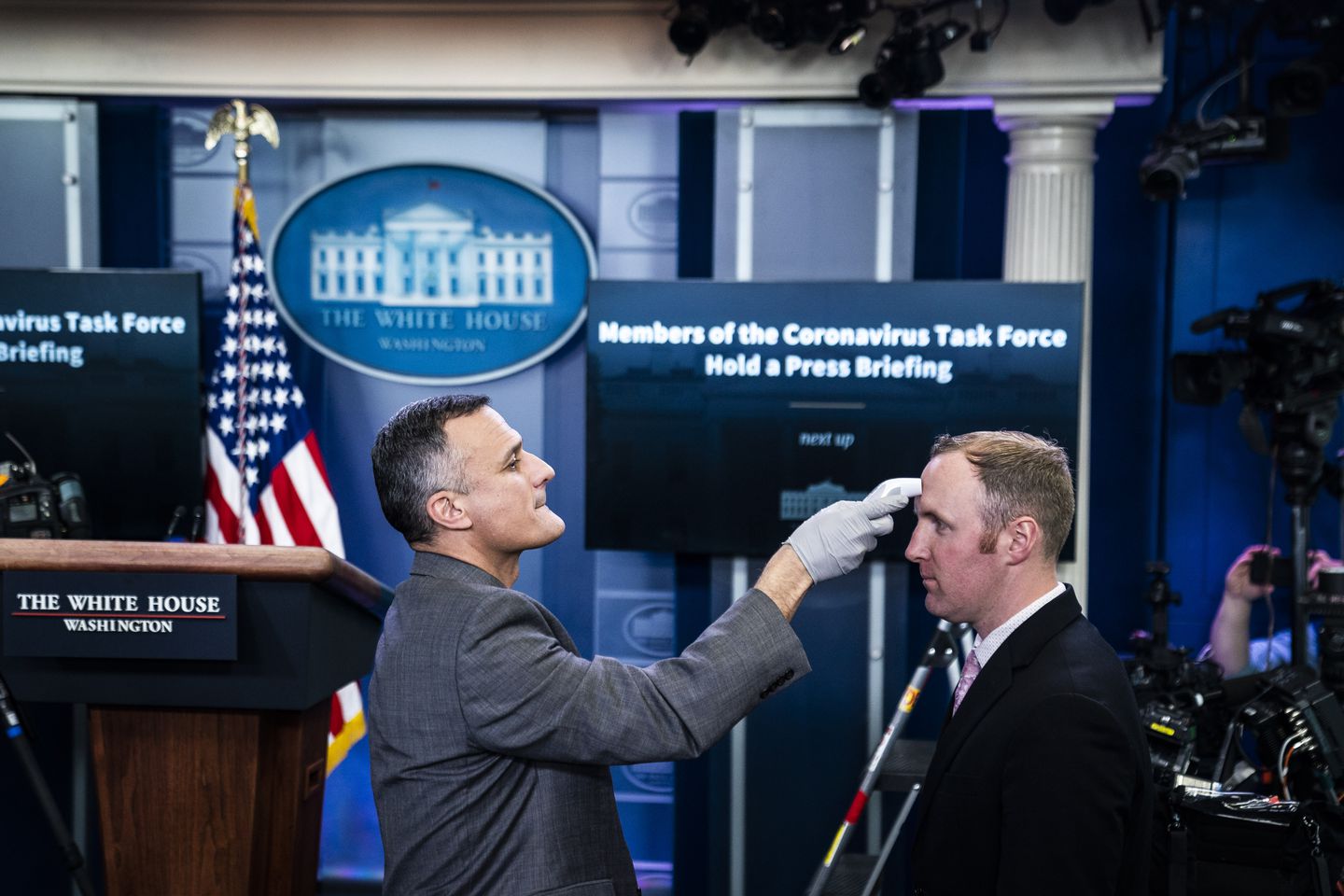 “U.S. stocks dropped sharply Monday even after the Federal Reserve slashed its benchmark interest rate to near zero, reflecting investors’ concerns that the emergency measures may not be enough to ward off a coronavirus-induced recession,” the Wall Street Journal reports.

“The Dow Jones Industrial Average slid 12.9%, or 2,999 points, as of the 4 p.m. Eastern time close of trading, dropping further during an afternoon news conference by President Trump.”

Trump held another 3:30 pm news conference, hoping I suppose to juice the markets like he did on Friday with his National Emergency declaration. And even though Trump did briefly sound like he was finally taking the pandemic seriously in announcing new social distancing guidelines from the CDC and admitting that the crisis will likely last until July and cause a recession, he always can’t help himself. He reporters that he would rate his administration’s response to the coronavirus a 10 on a scale of 1 to 10.

He added: “I think we’ve done a great job, and it started with the fact that we kept a very highly-infected country, despite all of the, even the professionals saying it’s too early to do that. We were very, very early with respect to China and we would have a whole different situation in this country if we didn’t do that.”

He also lied in saying that a month ago, no one knew about this virus. Joe Biden knew about it. He wrote an editorial warning about it on January 27.

“German officials will discuss a reported U.S. attempt to secure the rights to any coronavirus vaccine developed by a German pharmaceutical company in crisis meetings on Monday, amid concerns that the Trump administration was trying to monopolize the market,” the Washington Post reports.

“Interior Minister Horst Seehofer, when asked to confirm a report the Trump administration was attempting to secure exclusive rights to any vaccine created by the German biopharmaceutical firm CureVac, said he had ‘heard from several other members of government today that is the case.’”

“Top White House aides were unaware of any communication by or offer from President Trump to CureVac… The official cautioned, however, that Trump often has private conversations of which his staff is not aware, and therefore the official could not definitively rule out that any such discussion had occurred.”

I think a narrative is emerging where Trump, knowing that the pandemic was coming, delayed the US response in order to make sure he or his son in law profited off it. He tried to acquire this German company and make the vaccine exclusive to the US, meaning that foreign governments would have to pay a pretty penny to get access to it, and he refused the WHO’s test kits because he wanted an American company named Oscar Health to develop it. Oscar Health is owned by guess who.. Jared Kushner.

“It’s a very contagious virus, it’s incredible, but it’s something we have tremendous control of.” — President Trump, quoted by CNN yesterday, on the coronavirus outbreak.

“No, that’s not under control for any place in the world.” — Trump, quoted by CNN today, sharply changing his outlook on the crisis.

“President Trump told a group of governors Monday morning that they should not wait for the federal government to fill the growing demand for respirators needed to help people diagnosed with coronavirus,” the New York Times reports.

“The suggestion surprised some of the governors, who have been scrambling to contain the outbreak and are increasingly looking to the federal government for help with equipment, personnel and financial aid.”

I am willing to bet everything I have that he didn’t get a test done.

The UK only realised “in the last few days” that attempts to “mitigate” the impact of the coronavirus pandemic would not work, and that it needed to shift to a strategy to “suppress” the outbreak, according to a report by a team of experts who have been advising the government, BuzzFeed Newsreports.

The report found that the strategy previously being pursued by the government — dubbed “mitigation” and involving home isolation of suspect cases and their family members but not including restrictions on wider society — would “likely result in hundreds of thousands of deaths and health systems (most notably intensive care units) being overwhelmed many times over.”

The European Union is proposing a temporary restriction on all non-essential travel for 30 days, the Wall Street Journal reports.

“Mexico could consider measures at its northern border to slow the spread of the coronavirus into its relatively unaffected territory, health officials said on Friday, with an eye to containing a U.S. outbreak that has infected more than 1,800 people,” Reuters reports. “Mexico so far has confirmed 16 cases of the coronavirus, with no deaths.”

One economic bright spot: Amazon plans to hire an additional 100,000 employees in the U.S., as people are turning to online deliveries at a breakneck pace to help contain the spread of the new coronavirus, the Wall Street Journal reports.

The San Francisco Chronicle reports that six Bay Area counties are expected to announce a “shelter in place” order for all residents on Monday, directing everyone to stay inside their homes and away from others as much as possible for the next three weeks as public health officials desperately try to curb the rapid spread of coronavirus across the region.

“For most of last week, as Mayor Bill de Blasio continued to urge New Yorkers to mostly go about their daily lives — sending their children to school, frequenting the city’s businesses — some of his top aides were furiously trying to change the mayor’s approach to the coronavirus outbreak,” the New York Times reports.

“There had been arguments and shouting matches between the mayor and some of his advisers; some top health officials had even threatened to resign if he refused to accept the need to close schools and businesses.”

The proposal is set to be presented to appropriators as early as Tuesday.

About that bill the House passed on Friday last week, Rep. Louie Gohmert (R-TX) is holding it up and preventing it from being delivered to the Senate for a vote, NBC News reports. I hope he gets the virus and dies.

“US airlines are seeking government assistance of more than $50 billion, including a mix of direct aid and loan guarantees, as the industry reels from the coronavirus outbreak,” CNBC reports.

Financial Times: “The airline industry is warning that it must shed jobs and obtain state support to survive the coronavirus crisis, as a respected aviation consultancy predicted that most of the world’s carriers could go broke by May.

Sen. Mitt Romney (R-UT) proposed sending every American $1,000 to ease the financial pain of the coronavirus pandemic that has tanked global markets and threatened to grind U.S. economic activity to a halt, CNBC reports. Romney is now a Yang Ganger. And it’s not a bad idea.

Said Cuomo: “I don’t believe we’ll be able to flatten the curve enough to meet the capacity of the health care system.”

He repeatedly said the federal government will need to do more and said his administration is working with the National Guard and health officials to identify facilities that could be retrofitted to serve as hospitals, like dorms and old nursing homes.

“The governors of New York, New Jersey and Connecticut have agreed to a common set of rules to reduce density throughout the region, closing movie theaters, most restaurants and bars and limiting public gatherings to fewer than 50 people,” CNBC reports.

Said Gov. Andrew Cuomo: “We have agreed to a common set of rules that will pertain in all of our states, so don’t even think about going to a neighboring state because there’s going to be a different set of conditions.”

“Running out of federal court vacancies to fill, Senate Republicans have been quietly making overtures to sitting Republican-nominated judges who are eligible to retire to urge them to step aside so they can be replaced while the party still holds the Senate and the White House,” the New York Times reports.

“Senator Mitch McConnell, Republican of Kentucky, who has used his position as majority leader to build a judicial confirmation juggernaut for President Trump over the past three years, has been personally reaching out to judges to sound them out on their plans and assure them that they would have a worthy successor if they gave up their seats soon, according to multiple people with knowledge of his actions.”

“It was not known how many judges were contacted or which of them Mr. McConnell had spoken to directly.”

We see that Mitch has his own priorities. And it is not the pandemic.

The Supreme Court announced that it would postpone oral arguments for its March session because of the coronavirus outbreak. Two of the nine justices, Ruth Bader Ginsburg and Stephen Breyer, are in their 80s.