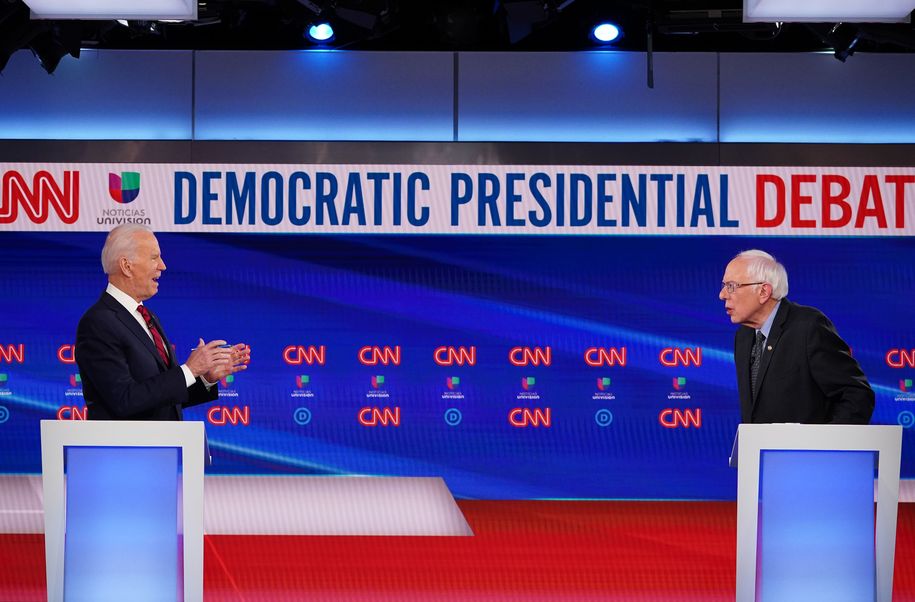 Biden is the overwhelming frontrunner and nothing in last night’s debate changed that. I speculated elsewhere that Bernie may choose to be the loyal opposition and just point differences in belief and tactics with Biden rather than just mercilessly attack him. I feel like Bernie tried a middle path, getting pointed and testy on some issues, like Social Security and Medicare for All, and being just contrasting in other areas. The first 40 minutes of the debate were dominated by the Coronavirus crisis and the two candidates engaged in a respectful Results v. Revolution dynamic.

But Biden was on his game and appeared presidential, and that was all he needed to do to dispel the nasty dementia attacks coming from Trump and certain segments of Bernie’s supporters. And without a major stumble by Biden, Sanders is left without an event that would change the trajectory of the race.

“Alabama Secretary of State John Merrill is seeking an emergency opinion on delaying the runoffs elections scheduled for March 31,” the Montgomery Advertiser reports.

Joe Biden committed to picking a woman as his running mate if he wins the Democratic presidential nomination.

Said Biden: “If I’m elected president, my Cabinet, my administration will look like the country. And I commit that I will in fact pick a woman to be vice president.”

AP: “As he campaigns for president, Joe Biden’s moderate approach to governing often fails to excite his party’s most passionate voters. But on the debate stage, as the nation wrestled with the consequences of a frightening pandemic, Biden’s pragmatism broke through in ways that affirmed why he has become the front-runner for the Democratic nomination. [..]

It was Biden’s first chance to show how he might be seen in a face-off with President Donald Trump. He was crisper in his answers than he had been in forums with multiple candidates and he was more focused when framing his differences with Sanders, who used the evening as perhaps a last, best shot at slowing Biden’s march. But in the midst of an escalating global health threat, it was much more than that.

With the nation focused on the coronavirus outbreak rather than traditions like Selection Sunday for the NCAA basketball tournament, the debate provided a national moment for Americans to more closely consider the final two men who want to be the alternative to Trump in November.

They offered dramatically different visions of leadership to an anxious nation suddenly held captive by crisis, giving Democratic primary voters, and the broader electorate, a chance to take an up-close measure.”

A new Monmouth poll in Arizona finds Joe Biden leading President Trump in a general election match up, 46% to 43%.

Said pollster Patrick Murray: “Impressions of the Democratic nominee will shift once the general election campaign gets under way, but Biden would start off by putting Arizona within reach.”

As Florida, Illinois, Ohio and Arizona prepare to vote tomorrow, it’s expected turnout will be down significantly as the nation deals with the coronavirus outbreak, NPR reports.

“Lori Edwards, the election supervisor for Polk County, Florida said her office was planning on a turnout rate of 40% to 50% for the primary but is now expecting roughly half that. Like other counties in the state, her office has had to deal with poll workers backing out of working the election and has had to move four precincts because the original locations didn’t want voters coming in.”

The Vermont senator argued that his Medicare for All proposal would be a long-term solution to help all Americans pay for COVID-19 treatment without having to pay for it themselves, while Biden focused more on the short-term, saying the response “should be coming out of the Situation Room.”

Neither proposal resembled Trump’s response to the virus, which has consisted of downplaying the pandemic as a minor concern, putting off a national emergency declaration only after weeks of pressure from the states, throwing confusion over Google’s role in the administration’s response to COVID-19,  and refusing to take responsibility for his administration’s failures in handling the outbreak.

Washington Post: “Sanders came out swinging more aggressively than Biden’s campaign expected, which seemed to catch him off guard at times, especially in the second half. “Joe, if my memory is correct, you helped write that bankruptcy bill,” Sanders said during the debate, noting that Warren’s proposal would undo major elements of the 2005 legislation Biden voted for. “I voted against it in the House, and I was right. And I don’t have to rethink my position, because that’s what leadership is about, having the guts to take an unpopular vote.” Biden said the bill was “going to pass overwhelmingly” in the GOP-controlled Senate so he focused on improving it. “I did not like the bill,” he said. […]

Sanders clearly feels a mix of pride, with a tinge of frustration, that Biden and others from the party establishment have co-opted so many of the ideas that he ran on in 2016. Even as Biden strategists hope that a shared desire to defeat Trump will coalesce the party behind him if he’s the eventual nominee, Sanders still wants credit for his consistency. “I have taken on every special interest there is out there, and that is what I will do in the White House,” Sanders said. “That’s a very different record than Joe’s.”

“‘I really don’t have any idea how it will go,’ said Wendy Sartory Link, supervisor of elections in Palm Beach County, the second-largest of Florida’s 67 counties. Of roughly 3,500 poll workers originally signed up to work at 435 voting locations in Palm Beach, about 650 have canceled amid fears about the virus … In France, voter turnout in the first round of local elections Sunday was down 20 points compared with 2014, … as some questioned President Emmanuel Macron’s decision to proceed with the vote.”