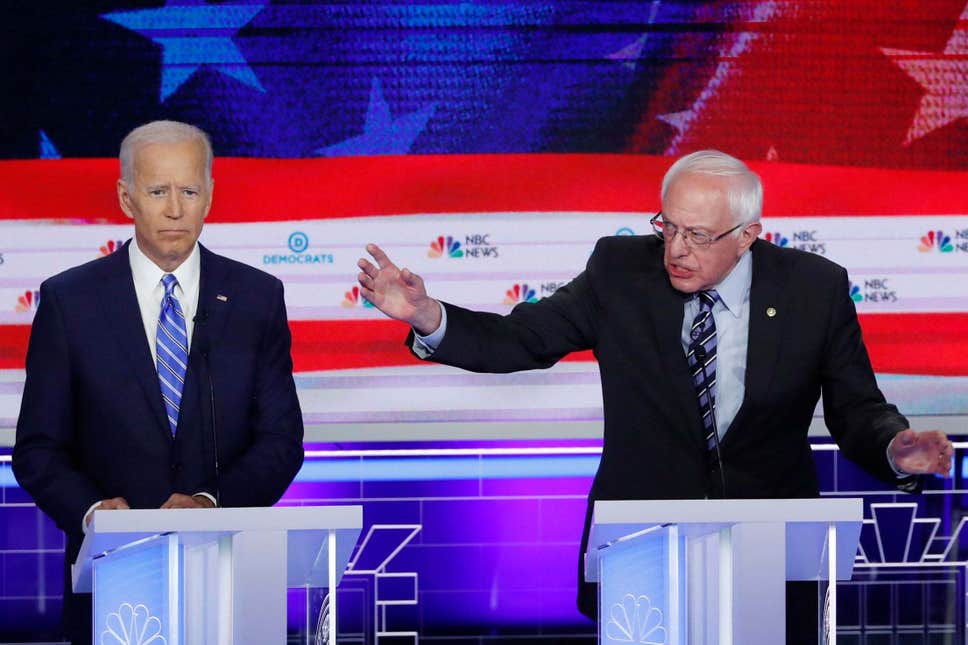 “Virtually the entire Democratic presidential primary has been predicated on one underlying assumption: the eventual collapse of Joe Biden,” Politico reports.

“More than a dozen of his erstwhile opponents bet their campaigns on it, and he’s proven them all wrong. But his last serious opponent standing, Bernie Sanders, is still clinging to the same belief — and that it will finally happen on Sunday night, under the bright lights of their one-on-one debate.”

“To revive his campaign, Sanders needs to prove he’s the best candidate to take on President Donald Trump and lead the country at a time of duress, his aides and allies say. But they also acknowledge privately it’s going to take more than that — namely, for the gaffe-prone Biden to stumble.”

New York Times: For Biden and Sanders, the fight is not personal.

My thoughts: Biden is always very good in debating one on one when the mood is calmer, rather in the 10-12 person screaming matches. He bested Sarah Palin with subtle skill, and simply destroyed Paul Ryan. I don’t think he is going to bomb tonight.

Politico: “Joe Biden has long complained about the crowded debate stage and a restrictive format that doesn’t allow enough time for candidates to speak. Now, in his one-on-one debate Sunday with Bernie Sanders, he finally gets the debate terms he wanted — and an opportunity to convince Democrats the race is effectively over.”

“Expectations aren’t high for the former vice president after a series of mediocre debate performances during primary season. The Sanders campaign, among other Biden detractors, views the debate as a chance for him to fall flat on his face, reviving questions about the durability of his candidacy just as Biden is poised to break the race wide open with a four-state sweep in the March 17 primaries.”

“But in years past, Biden has thrived in the one-on-one format during vice presidential debates. His plan Sunday is to focus on his electability and how he’s in sync with the Democratic electorate after winning 15 states, according to aides.”

The endorsement of the plan Warren laid out in her ultimately failed presidential bid, which a Biden campaign official confirmed to The Hill, is a stark departure for the former vice president. Warren’s plan explicitly sought to repeal parts of a 2005 bankruptcy bill Biden backed in the Senate.

Warren’s plan, announced in January, would scrap several aspects of the 2005 law, including means testing, separate bankruptcy processes for consumers based on wealth, credit counseling and other requirements she slammed as “onerous and complicated.”

The plan also proposes allowing student loans to be discharged during bankruptcy, a boost for younger voters — a key demographic with which Biden is hoping to make up ground.

“Louisiana has postponed its presidential primaries set for next month, becoming the first state to take the step as fears about the coronavirus outbreak spread,” CNBC reports. “The state will push back its nominating contests to June 20 and July 25.”

86% of survey respondents also said that healthcare policy is either extremely important (55%) or somewhat important (31%) to them in the presidential election.

The breakdown of that question by which news sources respondents used was interesting: Only 9% of frequent Fox News watchers were extremely concerned, while 48% of frequent MSNBC watchers expressed extreme concern.

A new Wall Street Journal/NBC News poll finds 60% of Americans say the worst is yet to come in the coronavirus pandemic, while 31% said the outbreak is not likely to be a major problem in the U.S.

“The content was standard, pro-Trump, anti-Democrat fare. What was very atypical was that it aired hundreds of miles from his home state, in Ohio.”

“As it turns out, the ad had nothing to do with Cotton’s current campaign, and everything to do with the one he’s eyeing four years from now — for the White House. He and Sen. Rick Scott (R-Fla.) are running commercials aimed at raising their profiles in key electoral battlegrounds and — perhaps more important — ingratiating themselves with President Trump and his supporters, who could prove critical in any future Republican presidential primary contest.”

“The date of the general election is set by federal law and has been fixed since 1845. It would take a change in federal law to move that date. That would mean legislation enacted by Congress, signed by the president and subject to challenge in the courts.”

“To call that unlikely would be an understatement.”

“And even if all of that happened, there would not be much flexibility in choosing an alternate election date: The Constitution mandates that the new Congress must be sworn in on Jan. 3, and that the new president’s term must begin on Jan. 20. Those dates cannot be changed just by the passage of normal legislation.”

The Republican National Committee announced chairwoman Ronna McDaniel has self-quarantined and is awaiting the results of a coronavirus test after exhibiting a fever and flu-like symptoms.

“Georgia elections officials postponed the presidential primary scheduled for next week because of the coronavirus pandemic, becoming the second state forced to push back a vote in the race for the White House due to the outbreak,” the Atlanta Journal Constitution reports.

“The state rescheduled the presidential vote previously scheduled for March 24 until May 19, the same date as the regular primary for a U.S. Senate seat and many other offices.”

0 comments on “The Campaign Report – The Final Debate?”