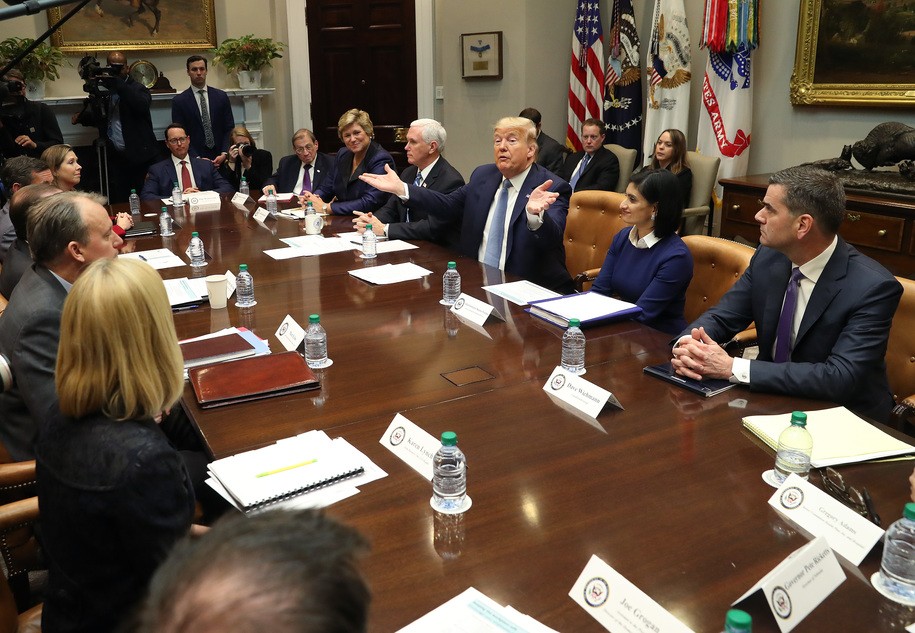 President Donald Trump addressed the nation from the Oval Office last night, appearing in what can only be described as a hostage video where the President snorted and sniffed (like he had contracted the virus or had done a few lines of Adderall) throughout the speech. The address comes as the Trump administration struggles to coordinate federal and local responses to the COVID-19 pandemic, leading to uncertainty and a plunging stock market.

“Trump announced he was taking ‘strong but necessary’ actions to keep new cases of the coronavirus from entering the United States by suspending all travel from Europe for 30 days, beginning on Friday. The restrictions did not apply to Britain,” the New York Times reports.

More than 1,100 cases of COVID-19 have been confirmed in the United States, and the number of newly confirmed cases has increased daily.

Politico reported Wednesday that Trump was reluctant to declare an emergency over the pandemic, something state health officials and experts say was preventing essential resources from reaching areas of the country hardest hit by the disease.

Indeed, yesterday the White House went past mixing disinformation into their misinformation, and simply moved to outright oppression of facts. Not only were experts pulled from a House hearing, and two meetings on coronavirus abruptly closed to the press, but Trump has actively classified critical public health data and hearings in a way that makes it more difficult to address this national crisis. And the whole reason seems to be so that no one can be heard contradicting Trump.

Well, if the virus can target those who are not taking it seriously, like Fox News viewers and Republicans, then I will become the virus’ biggest fan.

“The White House has ordered federal health officials to treat top-level coronavirus meetings as classified, an unusual step that has restricted information and hampered the U.S. government’s response to the contagion,” Reuters reports.

“The officials said that dozens of classified discussions about such topics as the scope of infections, quarantines and travel restrictions have been held since mid-January in a high-security meeting room at the Department of Health & Human Services, a key player in the fight against the coronavirus.”

CNN: “Trump has littered his public remarks on the life-and-death subject with false, misleading and dubious claims. And he has been joined, on occasion, by senior members of his administration.” “We’ve counted 28 different ways the President and his team have been inaccurate.”

“President Trump is reluctant to declare an expansive emergency to combat the escalating coronavirus outbreak, fearful of stoking panic with such a dramatic step,” Politico reports.

“Instead, the president is expected to sign within days a more limited designation to allow the federal government to cover small business loans, paychecks for hourly workers and delay tax bills, the White House said Wednesday. An emergency declaration would go significantly beyond that move, bringing in the Federal Emergency Management Agency and freeing up funding and resources for states struggling to contain the rapidly spreading virus.”

Key takeaway: “There’s no deadline for a decision, but one of the people familiar with the talks said the task force will not give Trump its final verdict until Jared Kushner, the president’s senior adviser and son-in-law, finishes his research and comes to a conclusion himself.”

“Congress’ in-house doctor told Capitol Hill staffers at a close-door meeting this week that he expects 70-150 million people in the U.S. — roughly a third of the country — to contract the coronavirus,” Axios reports.

“That estimate, which is in line with other projections from health experts, underscores the potential seriousness of this outbreak even as the White House has been downplaying its severity in an attempt to keep public panic at bay.”

“The White House is considering placing all of Europe under a Level 3 travel advisory, discouraging all nonessential travel there to help stop the spread of the novel coronavirus,” the Washington Post reports.

“China is at a Level 4, which discourages all travel to the country. South Korea and Italy are at Level 3, though some regions in both countries are at a Level 4 because of the prevalence of the outbreak.”

“All shops, restaurants and cafés will be closed 24/7 and businesses and factories will have to limit activities as much as possible, encouraging staff to take holiday or work from home. Food and drug stores, as well as post offices and banks, will remain open. Public transport will continue to run. The new measures will last for two weeks.”

“Two of the five city employees said they personally took bribes to lower the assessment on a Trump property; the other three said they had indirect knowledge of the payments.”

“During that tense Monday meeting in the Oval Office, Trump fumed that Powell never should have been appointed and is damaging the nation and his presidency.”

The Supreme Court gave the Trump administration another immigration win on Wednesday, blocking a federal injunction that would have halted the Migration Protection Protocols (MPP) — or “Remain in Mexico” policy — in California and Arizona, Axios reports.

World Health Organization officials said the spread of the coronavirus across more than 100 countries now qualifies as a global pandemic, confirming what many epidemiologists have been saying for weeks, the New York Times reports.

From a statement: “Pandemic is not a word to use lightly or carelessly. It is a word that, if misused, can cause unreasonable fear, or unjustified acceptance that the fight is over, leading to unnecessary suffering and death.”

Wall Street Journal: “The Trump administration is likely to extend the April 15 tax deadline as part of an effort to mitigate the effects of the novel coronavirus on U.S. households and businesses.”

“Neither the decision to extend the deadline nor the mechanics of how such an extension might work are yet final. Normally, individuals must pay their prior year’s taxes by April 15 or face penalties and interest charges. People can already get extensions through mid-October to file their returns as long as they have paid on time by mid-April. This decision would go further than that.”

Playbook: “Amid the Bach and forth over the federal response to the coronavirus, this much the top ranks of Republican and Democratic leadership and the White House can agree on: Speaker Nancy Pelosi, once again, has extraordinary leverage over President Trump and the White House. One Republican put it to us this way: Pelosi has Trump over a barrel.”

“Here’s why: Trump and his White House are the public faces of the fallout over the deadly virus rippling across the nation, and he needs Pelosi — his nemesis — to cut a deal, and pass a bill. The U.S. just surpassed 1,000 confirmed cases as of Tuesday night.”

“Of course, Pelosi has a laundry list of priorities of her own. But rarely is the leverage as skewed as it is here.”

“Something to keep an eye on: In our conversations, Tuesday, one influential Republican made sure to tell us that this is not like TARP. No one had suggested it was, so clearly the GOP is feeling anxious about having this branded as a massive bailout.”

Playbook: “We hear from senior Republican sources close to President Trump that the White House likes what it has heard so far about the bill House Democrats are putting together, and Trump would be inclined to sign it as long as it doesn’t include surprise provisions that the administration opposes. This is a preliminary assessment and, like everything, could change.”

Politico: “The White House is unlike any other office, and a decision to transform it into a remote operation could ripple across governments at the federal, state and national levels — setting the tone for other officials, state governments and corporations to make their own telework determinations. A less-populated White House complex also risks sending a startling signal to the nation about the severity of the coronavirus. And it presents a logistical nightmare — classified meetings are not easily held via videoconference.”

“The Trump administration is racing to develop contingency plans that would allow hundreds of thousands of employees to work remotely full time, an extreme scenario to limit the coronavirus that would test whether the government can carry out its mission from home offices and kitchen tables,” the Washington Post reports.

“The Office of Personnel Management, which oversees policy for the workforce of 2.1 million, has urged agency heads in recent days to ‘immediately review’ their telework policies, sign paperwork with employees laying out their duties, issue ­laptops and grant access to computer networks.”