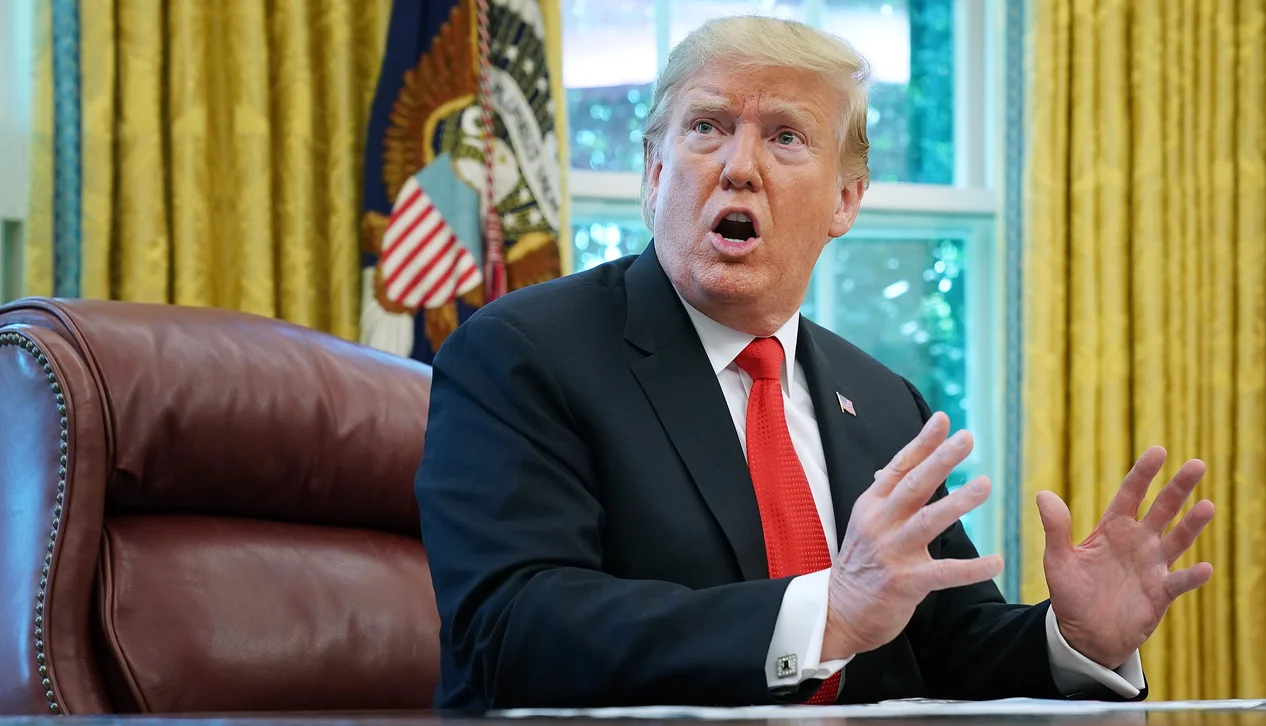 Trump – again – downplayed the severity of the coronavirus epidemic, saying “everything is working out” and that “it will go away, just stay calm.”  However, there have been more than 900 cases of coronavirus in the U.S., including 27 deaths. And, despite markets showing continued volatility following Wall Street’s worst day since the 2008 financial crisis, Trump suggested that “the consumer has never been in a better position than they are right now.”

“Many Americans will be exposed to COVID-19 over the next year or so with many people in the U.S. getting sick, a top CDC official said Monday, recommending that people over 60 and anyone with chronic medical conditions buckle down for a lengthy stay home,” CNBC reports.

So more mixed messages from the Administration. Trump says everything is fine, but then his underlings say Emergency! Cancel Everything!

“President Trump told Republican senators on Tuesday that he wants a payroll tax holiday through the November election so that taxes won’t go back up before voters decide whether to return him to office,” Bloomberg reports. “Democrats have expressed reluctance about a tax cut to address the economic impact of coronavirus and several Republican senators also held back from endorsing the idea before Trump’s visit to the capitol.”

“The White House is also strongly considering pushing federal assistance for oil and natural gas producers hit by plummeting oil prices amid the coronavirus outbreak, as industry officials close to the administration clamor for help,” the Washington Post reports. “White House officials are alarmed at the prospect that numerous shale companies, many of them deep in debt, could be driven out of business if the downturn in oil prices turns into a prolonged crisis for the industry.”

“The Russian government has stepped up efforts to inflame racial tensions in the United States as part of its bid to influence November’s presidential election, including trying to incite violence by white supremacist groups and to stoke anger among African-Americans,” thew New York Timesreports.

“Russia’s lead intelligence agency, the S.V.R., has apparently gone beyond 2016 methods of interference, when operatives tried to stoke racial animosity by creating fake Black Lives Matter groups and spreading disinformation to depress black voter turnout. Now, Russia is also trying to influence white supremacist groups, the officials said; they gave few details, but one official said federal investigators are examining how at least one neo-Nazi organization with ties to Russia is funded.”

Former White House homeland security adviser Thomas Bossert, who coordinated the U.S. response to global pandemics before his position was cut, told NBC News that time is running out to control the spread of coronavirus.

Said Bossert: “We are 10 days from our hospitals getting creamed.”

Washington Post: “Some friends have told Trump that the coronavirus does not seem like a major threat, noting that they don’t know anyone in their communities who has been infected. Some also have sought to flatter Trump by saying that unlike the two septuagenarians running for the Democratic nomination — Joe Biden and Sen. Bernie Sanders — Trump, 73, is so healthy that he is not personally at particular risk, according to a senior administration official.”

Jonathan Chait: “Right, the president who doesn’t exercise, has to be tricked into eating vegetables like a toddler, and had to use a golf cart rather than accompany fellow world leaders on a short walk is just so monumentally healthy he has nothing to worry about.”

National Review: “Trump so far hasn’t passed muster on any of these metrics. He resisted making the response to the epidemic a priority for as long as he could — refusing briefings, downplaying the problem, and wasting precious time. He has failed to properly empower his subordinates and refused to trust the information they provided him — often offering up unsubstantiated claims and figures from cable television instead. He has spoken about the crisis in crude political and personal terms. He has stood in the way of public understanding of the plausible course of the epidemic, trafficking instead in dismissive clichés. He has denied his administration’s missteps, making it more difficult to address them.”

“This presidential behavior is all too familiar. It is how he has gotten through scandals and fiascos for more than three years in office. But those were all essentially political in nature, and most were self-created. The country has been lucky in the Trump era, largely avoiding the sorts of major, unforeseen crises that make the greatest demands of the modern presidency. That luck has now run out, and this demands a new level of seriousness from the president and those around him.”

“Italian Prime Minister Giuseppe Conte announced Monday that the government has extended internal travel restrictions to the entire country, after initially locking down the country’s northern region in an effort to contain the coronavirus,” Axios reports.

“It’s an extreme measure that effectively locks down 60 million people in one of the most populated countries in Europe, where more people have tested positive for the coronavirus than any country outside of China.”

“The divided ruling, which can be appealed, is a victory for Democratic lawmakers in one of a set of separation-of-powers lawsuits filed before the House vote to impeach President Trump and his acquittal in the Senate in February.”

“Acting Director of National Intelligence Richard Grenell has declined to appear before Congress on Tuesday to speak about foreign election threats, citing apprehension about his preparedness to address sensitive subjects that tend to upset the president,” the Washington Post reports.

“The top intelligence community official asked President Trump to be excused from the briefings because he anticipated pointed questions from Democrats about politically volatile subjects — such as intelligence assessments that Russia is once more interfering in American politics, two of the people said, speaking on the condition of anonymity to describe private discussions.”

“New York Gov. Andrew Cuomo (D) on Tuesday announced schools and places of worship within a one-mile zone of the city of New Rochelle will close their doors for 14 days, and National Guard troops will help deliver food and disinfect common areas inside the zone,” the Washington Post reports.

“Russia’s parliament has proposed resetting President Vladimir Putin’s term limits as part of sweeping constitutional changes, allowing him to remain in office potentially until at least 2036,” the Financial Timesreports.

New York Times: “After lawmakers voiced support for the idea, Mr. Putin arrived in person at the State Duma to say he agreed with it, in what appeared to be a tightly choreographed course of events. Mr. Putin said he believed he should have the right to run again for the sake of Russia’s stability, even though future presidents should continue to be bound by a two-term limit.”

“Immigration court staff nationwide have been ordered by the Trump administration to take down all coronavirus posters from courtrooms and waiting areas,” the Miami Herald reports.

“The Executive Office for Immigration Review, which falls under the Department of Justice, told all judges and staff members in an email Monday that all coronavirus posters, which explain in English and Spanish how to prevent catching and spreading the virus, had to be removed immediately.”

“The incoming White House chief of staff, Rep. Mark Meadows of North Carolina, was among three Republican congressmen who said Monday that they were quarantining themselves because of suspected contact with a confirmed carrier of the coronavirus,” the Washington Post reports.

“Meadows learned this weekend that he “may have come in contact” with the individual who attended the annual Conservative Political Action Conference in suburban Washington late last month. Meadows tested negative for the virus and is not displaying symptoms but is remaining home in self-quarantine until Wednesday.”

Walter Russell Mead: “The coronavirus pandemic is the greatest challenge Donald Trump has ever faced. As stock markets fall and patient numbers rise, the epidemic threatens the lives of some Americans and the prosperity of all—and it has already begun to disrupt the political methods that brought Mr. Trump to the White House.”

“As he has done in other crises, the president is stalling for time as he processes the nature of the threat and tests rhetorical and policy responses to it. But unlike human political adversaries, the coronavirus isn’t something he can bluff, threaten or placate. If the epidemic follows the course medical experts believe to be largely inevitable, both the disease and its economic consequences will be immune to Mr. Trump’s standard tactics. He can’t spin them away, divert public attention by creating another drama, or blame them on President Obama. In the near future the mass rallies that have been critical to Mr. Trump’s political success may be banned on public-health grounds. If he is especially unlucky, one of his rallies could be implicated in a major outbreak.”