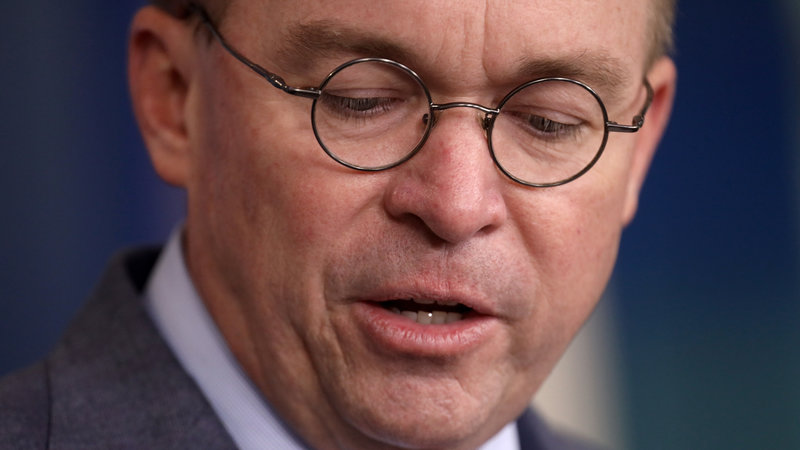 “President Trump said Friday that Rep. Mark Meadows, Republican of North Carolina and a stalwart conservative ally, will become White House chief of staff, replacing Mick Mulvaney, who has served as the acting chief for more than a year,” the New York Times reports.

“He said that Mr. Mulvaney will become the United States special envoy for Northern Ireland, shaking up his battle-weary team as he leaves impeachment behind him and faces a high-octane election campaign that will test whether he can defy the odds once again to win a second term.”

The Trump administration claimed that the coronavirus outbreak was “contained” even as the number of U.S. cases have surpassed 250 – more than double since Monday – and test kits remain in short supply.

Federal officials initially said nearly 1 million tests were expected to be available by the end of this week. While the CDC has refused to share how many people have been tested for COVID-19, a survey of public health agencies in every state could only verify 1,895 Americans who had been tested for the virus. About 10% of them tested positive.

Los Angeles Times: “Federal officials said nearly 1 million tests were expected to be available by the end of this week. But in California, one of the country’s hardest-hit regions with 60 cases, the total testing capacity is limited to only 7,400 through the weekend, according to the California Department of Public Health.”

“The inability to test widely and swiftly for the novel coronavirus has impeded the country’s ability to beat back the spread of the virus, experts say. Without testing, public health officials don’t know where the virus is spreading and where to target efforts to contain it.”

Nevertheless, Kellyanne Conway told reporters that “It is being contained,” challenging a reporter who suggested it isn’t. “Are you a doctor aware of it not being contained?” Trump’s top economic adviser, Larry Kudlow, echoed Conway, saying the outbreak “looks relatively contained.”

Trump abruptly canceled – then rescheduled – a planned trip to CDC headquarters in Atlanta. Trump said the trip was scrapped because of a suspected coronavirus case at the CDC itself. The White House, however, said the visit was canceled because “the president does not want to interfere with the CDC’s mission to protect the health and welfare of their people and the agency.”

The report of an infection at CDC turned out to be negative and the trip was rescheduled. CDC staffers learned about potential coronavirus case at the agency only after Trump mentioned it to reporters. Trump is slated to go to Atlanta after touring tornado damage in Tennessee and before heading to Mar-a-Lago for the weekend.

President Trump called Washington Gov. Jay Inslee “a snake” for criticizing his administration’s response to the coronavirus outbreak, Politico reports. Speaking in Atlanta at the Centers for Disease Control and Prevention, Trump went off on Inslee for saying that he wanted Trump to stick to the science when discussing the outbreak. Trump has repeatedly tried to downplay the gravity of the outbreak and floated his own hunches on matters of science.

White House economic adviser Larry Kudlow said the Trump administration is considering “timely and targeted” relief to help workers and businesses economically vulnerable to the outbreak. Kudlow insisted that the U.S. economy is “fundamentally sound,” but Trump administration officials have considered deferring taxes for sectors most affected by the outbreak, including the hospitality, cruise, travel and airline industries.

Kudlow told CNBC that American workers should “stay at work” despite the coronavirus outbreak.

“White House officials are considering deferring taxes for industries hurt by the coronavirus outbreak, including the cruise, travel and airline industries, among other options,” the Washington Post reports.

“The discussions are a sign that the White House is grappling with the economic fallout of the coronavirus outbreak, while publicly downplaying the financial pain.”

Meanwhile at a Fox News town hall, Trump said he “likes” that “people are now staying in the United States, spending their money in the US […] They’re sort of enforced doing that.”

Time: “Since January, epidemiologists, former U.S. public health officials and experts have been warning, publicly and privately, that the administration’s insistence that containment was—and should remain—the primary way to confront an emerging infectious disease was a grave mistake.”

“The administration was using all its resources to blockade the doors, they warned, but the enemy was likely already in the house.”

“When it finally became indisputable that an outbreak was underway in Washington state, the administration were slow to catch up. There were not enough COVID-19 testing kits, hotlines were overwhelmed, and hospitals and public health departments were hobbled by a lack of reliable statistics on the spread of the disease. Experts say the U.S. response is now likely weeks—if not months—behind schedule.”

The samples would be put into a database operated by the FBI for federal, state, and local authorities to use to identify and locate violent criminals who are in the country illegally. Officials said the collection effort will fully enforce the 2015 DNA Fingerprint Act, which requires taking DNA samples from anyone arrested, facing charges or convicted — and from any non-U.S. citizens “who are detained under the authority of the United States.” The Department of Homeland Security, however, asked for an exemption from the law during the Obama administration, saying it did not have the manpower to gather the samples. (Wall Street Journal / Bloomberg / NBC News)

The Trump Organization charged the Secret Service $157,000 more than was previously known and billed taxpayers for rooms at his clubs at much higher rates than the company claimed. Newly obtained documents show Trump’s company charged the Secret Service more than $628,000 since he took office in 2017. The full scope of the Trump Organization’s business relationship with the Trump administration is still unknown because the only publicly available records are mostly from 2017 and 2018 — the rest are still hidden.

The new documents show charges for 177 additional nightly room rentals in 2017, 2018, and 2019 at a rate of $396.15 per night per room. They also reveal that Trump charged the Secret Service $17,000 per month to rent a cottage near Trump’s in Bedminster, NJ. There is no requirement that presidents charge the Secret Service for using space on their properties, and most presidents have provided space for free. (Washington Post / Public Citizen)

“It is the option that nobody in the Olympic movement wants to talk about, but it is the one staring everyone in the face: a Tokyo Games this summer with no fans, just 10,000 athletes competing in front of seas of empty seats,” the New York Times reports.

“As the coronavirus continues to spread, with more than 3,000 deaths and 90,000 documented cases worldwide, sporting events without fans are edging toward becoming a kind of new normal.”

“Employers added 273,000 jobs in February and the jobless rate was 3.5%, signs of labor-market strength before the novel coronavirus spread widely in the U.S.,” the Wall Street Journal reports.

Los Angeles Times: “The global outbreak that has sickened nearly 100,000 people across six continents may actually be fueled by two variants of the same coronavirus: one older and less aggressive and a newer version whose mutations may have made it more contagious and more deadly, according to a controversial new study.”

“Chinese scientists who compared the genetic sequences of 103 viral samples from patients infected with COVID-19 said their evidence suggests that the virulent version of the coronavirus — which they tagged the ‘L-type’ version — was the dominant strain in the earliest phase of the outbreak that began in Wuhan late last year. That strain, they said, appeared to recede as the epidemic progressed.”

“But among samples collected later, as COVID-19 spread across China and into other countries, a variant of the virus they dubbed the ‘S-type’ was more common, the scientists reported. They suggested that the genetic makeup of the S version more closely resembles coronaviruses circulating in bats and pangolins, the animals that are thought to have incubated the virus before it jumped to humans. And they surmised that it is a less virulent version.”

Playbook: “What if this is only the beginning of the coronavirus economic downturn? Imagine if stocks keep on slipping and, even more concerning, if Americans truly stop traveling domestically and internationally over the spring and summer. Many of the members of Congress we spoke to this week were worried about the virus reemerging this fall, pressing the pause button on the economy again.”

“Could Congress be forced into some kind of economic stimulus this spring or summer right before the election? Could Washington be forced to try to help airlines, hotels and even individuals in the middle of a political season?

“More bluntly: Would Democrats want to vote for any kind of bailout package that could help with President Trump’s reelection? And could Trump’s administration handle a legislative crisis with precision under pressure?”

“As leading public health experts from across the government have tried to provide clear and consistent information about the deadly coronavirus, they have found their messages undercut, drowned out and muddled by President Trump’s push to downplay the outbreak with a mix of optimism, bombast and pseudoscience,” the Washington Post reports.

“The president has repeatedly misstated the number of Americans who have tested positive for the virus and claimed it would “miraculously” disappear in the spring. He has given a false timeline for the development of a vaccine, publicly questioned whether vaccinations for the flu could be used to treat the novel coronavirus and dismissed the World Health Organization’s coronavirus death rate estimate, substituting a much lower figure and citing a ‘hunch.’”

Sen. Lindsey Graham (R-S.C.) urged President Trump in a CNN interview to pay attention to scientific facts instead of making up a coronavirus death rate.

Said Graham: “I don’t know what he was talking about. I would encourage the president, if he’s going to report things, to make sure that the science is behind what he says. I listen to the scientists when it comes to the numbers.”