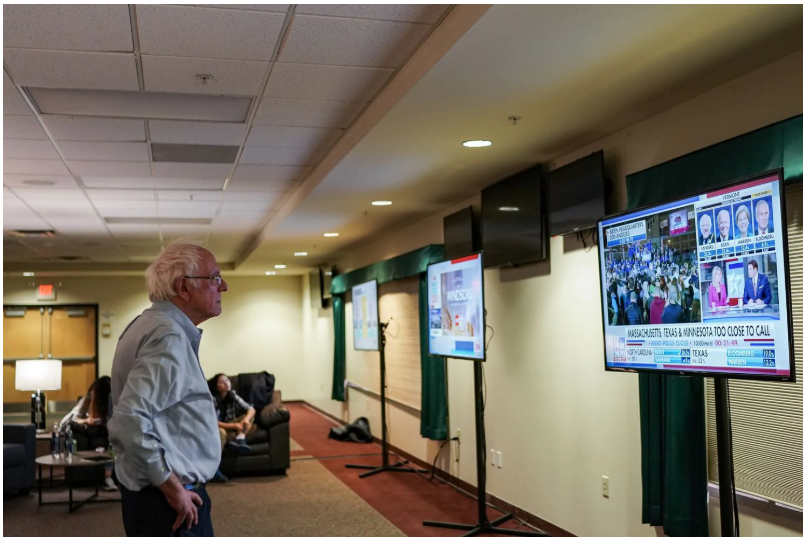 Mike Bloomberg, the billionaire former mayor of New York who had hoped to self-fund his way to the Democratic presidential nomination but was spurned by voters in Tuesday’s balloting, has suspended his campaign, the Washington Post reports.

Said Bloomberg: “I’ve always believed that defeating Donald Trump starts with uniting behind the candidate with the best shot to do it. After yesterday’s vote, it is clear that candidate is my friend and a great American, Joe Biden.”

“Sen. Elizabeth Warren is taking a day to assess whether she still has a path to the Democratic nomination after a disappointing Super Tuesday in which she finished an embarrassing third place in Massachusetts, her home state,” The Hill reports.

“Warren flew home to Boston late Tuesday and has no public events scheduled for the day.”

The next round of primaries will include Michigan, and a new poll from Detroit News/WDIV-TV survey shows Joe Biden leading Bernie Sanders in the Democratic primary, 29% to 23%. They are followed by Mike Bloomberg at 11% and Elizabeth Warren at 7%.

Ron Brownstein: “The surprisingly decisive result left Sanders, a candidate who prides himself on his pile-driver-like consistency, facing a new challenge: finding a second act that can appeal to voters beyond the fervid base he has established. The evening’s clearest message was that while the senator from Vermont has inspired a passionate depth of support, the breadth of his coalition remains too limited to win the nomination.”

“Sanders reached 33% or more of the vote in just five of the 14 states that voted (including his home state of Vermont) and did not exceed 36%, his share in Colorado. Biden had a higher ceiling: He won at least 39% in seven states and roughly a third of the vote in three others.”

Said pollster Stan Greenberg: “Sanders has made no effort to reach out beyond his voters, his movement, his revolution. It just has not grown. It is an utterly stable vote that is grounded in the very liberal portion of the Democratic Party, but he’s so disdainful of any outreach beyond that base. He seems content to just keep hitting that drum.”

This is one of the reasons I dislike Bernie and will never vote for him in a primary. If wants my party’s nomination, he should stop attacking my party and all Democrats all the time. Speak more positively about taking the party in a new direction. Talk about the future.

Tim Miller: “They don’t want a revolution—they just want to stop having to talk about this president’s behavior with their kids. They are the 100,000 additional voters who voted in Fairfax County, Virginia, over the Democrats 2016. They are the Human Scum and independents and moderate Democrats in the Dallas and Houston suburbs, who appeared to give Biden an improbable primary victory in Texas. They are the working-class Democrats in Norfolk Country, Massachusetts, who went for Biden over both Bernie and their own, home-town senator.”

“This is the new silent majority. They are his path to an improbable White House comeback.”

Attention Bernie guys and gals, candidates endorsing other candidates after ending their own campaigns is not a coup. It is called politics, and it is something you all are demanding Elizabeth Warren to do. Are you all engaging in a coup? No. You are engaging in politics. Politics is about building coalitions to win office, so you can enact policy.

The problem with Bernie and purity progressives is you all do not like building coalitions, and instead you look to exclude those who may be allies but are in fact impure. That is not a recipe in expanding your voting base so you can win the primary and general election.

This dive into conspiracy land when the news isn’t good for a dear leader is Trumpian, not liberal or progressive. The first step in coming to terms with a loss is accepting reality rather than denying facts.

Amy Walter: “The other thing that Biden lacked that literally, every other candidate had more of than he did: money and organization. Sanders and Warren had invested in field operations and the early vote for months. Bloomberg, of course, spent more than $500 million on TV ads and campaign infrastructure. But, in the end, Biden had the more powerful GOTV operation: Donald J. Trump. Democrats want to beat Trump. Biden is the guy who is most likely to do it. The end.”

Domenico Montanaro: “Before Tuesday, voters younger than 30 were not keeping pace with the overall increase in voter turnout. In fact, young voters’ share of the electorate went down in three of the first four states compared with 2016.”

“On Tuesday night, not a single state saw an increase in young voters’ share of the electorate, according to exit polls conducted by Edison Research and sponsored by several of the television networks.”

Vox: “It’s really hard to overstate how bad this is for Sanders. It’s not just that his campaign relies on these voters, although it does. It’s that a core driving philosophy of his campaign is that he will inspire a political revolution, one led, in particular, by a surge in young voters. That’s how he has envisioned defeating Trump in November. If that’s not happening, then how is the Sanders campaign a movement at all?”

President Trump weighed in on the Democratic primaries, suggesting that Joe Biden was in a strong position to become the Democratic nominee and calling Elizabeth Warren “so selfish” for staying in the race.

Said Trump: “The Democrat establishment came together and crushed Bernie Sanders, AGAIN! Even the fact that Elizabeth Warren stayed in the race was devastating to Bernie and allowed Sleepy Joe to unthinkably win Massachusetts. It was a perfect storm, with many good states remaining for Joe!”

On Warren, he added: “She has Zero chance of even coming close to winning, but hurts Bernie badly. So much for their wonderful liberal friendship. Will he ever speak to her again? She cost him Massachusetts (and came in third), he shouldn’t!”

First off, many Warren voters, myself included, would not vote for Sanders if she were to drop out. My vote would go to Biden if my choice is between Biden and Sanders and Gabbard. Warren’s base is college educated suburban white liberals, like myself. And according to exit polls yesterday, Biden won that cohort, college educated suburban white liberals, by a landslide. It is not outrageous to assume that a Warren campaign suspension would help Biden further consolidate support.

Dan Balz: “For the foreseeable future, the calendar will not get easier for Sanders. In coming weeks, the states holding contests, with some exceptions, were ones that he lost to Hillary Clinton four years ago. In some of the states he won in 2016, the shift from caucuses to primaries could hold down his delegate totals even if he were to win again.”

“President Trump’s political operation is shifting its focus to apparent Democratic frontrunner Joe Biden — and ramping up its efforts to convince Bernie Sanders’ supporters he’s being robbed of the nomination,” Politico  reports.

“With Biden suddenly vaulting to the front of the Democratic pack with his array of Super Tuesday wins, Republicans are intensifying their attacks on the 77-year-old former vice president. It represents a dramatic reversal: As late as last week, many in Trump’s circle were certain that Sanders would be their general election opponent and had all but written off Biden.”

“The turnabout could have profound implications for Trump’s political fortunes. Many of the president’s top advisers had been relishing the idea of a match-up against Sanders, a self-described democratic socialist who threatens to alienate the affluent suburbanites who decisively swung to Democrats in 2018.”

“Joe Biden went into Super Tuesday with fewer financial resources than other candidates. But he will be in much better shape by the end of the night,” CNBC reports.

“Bundlers loyal to Biden are seeing dozens of new donors, several maxing out with the top allowable $2,800, as he picks up victories in Virginia, North Carolina, Tennessee, Oklahoma, Alabama, and other states.”

2 comments on “The Campaign Report – The Day After”