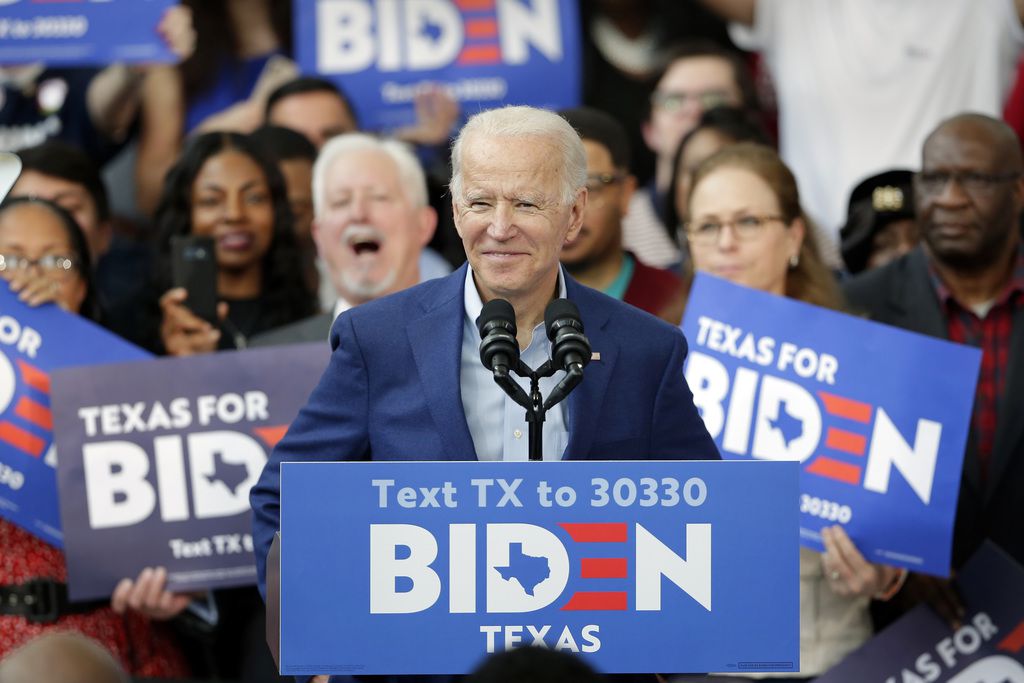 And then there were three. Pete Buttigieg and Amy Klobuchar are endorsing Joe Biden tonight in Texas, and they will now be joined by former candidate Beto O’Rourke. O’Rourke will endorse Joe Biden tonight at a rally in Dallas, NBC News reports.

Said Reid: “President Donald Trump has done unspeakable damage to our country, our institutions and the rule of law. Democrats need a candidate who can assemble the largest, most diverse coalition possible to defeat Trump and lead our country following the trauma of Trump’s presidency. That candidate is Joe Biden.”

“In former President Barack Obama’s conversation with Joe Biden after the South Carolina primary — the first congratulatory call the former president has been able to make to his former vice president during the 2020 campaign — Obama made clear he was planning to stay on the sidelines and not offer an endorsement in the race,” CNN reports.

“He feels that he’s singularly positioned to help unify the party at the end of this. And if he were try to put his thumb on the scale now, it would take away his ability to do so when it’s most needed — the general election.” — An confidant to Barack Obama, telling CNN why the former president isn’t endorsing yet in the Democratic presidential primary.

FiveThirtyEight has a really good simulation that let’s you pick the winners in each Super Tuesday state so you can see how it changes the forecast.

Dan Balz: “No day on this year’s primary-caucus calendar sets up any better for Sanders than this year’s Super Tuesday. Beyond that, primaries in the future are mostly closed, denying Sanders the votes of independents, one of his best constituencies.”

“Campaign strategists can’t say just how well Sanders will be positioned after Super Tuesday. There are simply too many variables — too many candidates, too much fluidity and too many combinations about possible outcomes. Campaigns have been modeling the states and constantly tweaking internal projections. As one strategist put it: ‘It’s an insane Rubik’s cube.’”

“Officials say turnout in Saturday’s Democratic presidential primary in South Carolina was the largest in state history,” the AP reports. “Democratic Party officials said Monday that more than 539,000 votes were cast in the contest. That’s nearly 7,000 more than in 2008, the previous record.”

It’s ironic. Bernie promised that he would produce record turnouts. It was Biden who delivered it instead.

New Yorker: “Parscale relied on Facebook to help him accomplish several campaign objectives, including persuasion, fund-raising, and G.O.T.V., or ‘get out the vote.’ Finding and motivating likely voters through traditional means, such as TV ads or door-to-door canvassing, is expensive and time-consuming compared with social media.”

“Even if Trump were banned from every social network, his campaign would be able to reach supporters by text. According to Parscale, the campaign is on track to send ‘almost a billion texts, the most in history’—and texts are far more likely to be opened than e-mails, social-media posts, or news articles. ‘We’ve been working on this around the clock for three years,’ a senior official who works on the 2020 digital campaign told me.”

Vice: “Warren has spent the past days chasing frantically across the country in a desperate search for Super Tuesday delegates. But her biggest problem might be back at home. Warren faces the real risk of losing Massachusetts to Sanders, a blow that could knock her out of the race. And as Warren raced from South Carolina to Alabama to Texas, Sanders dropped into her home state this weekend to try to seal her fate.”

“Three separate polls released in recent days show he’s right. Sanders, from neighboring Vermont, has inched ahead of Warren in her home state, buoyed by his strong showing in the early states and Warren’s failure to finish higher than third place in any of them.”

“A home-state loss would be devastating to Warren. It’s hard to see how she would continue after Super Tuesday at that point, especially since Massachusetts shapes up as by far her best chance of winning a Super Tuesday state.”

NBC News: “A race that began with Warren being ‘with Bernie’ on progressive policies, like Medicare For All, has now become one where she is trying to make clear to voters that she’s an alternative to the Vermont senator who has assumed the front-runner position in the 2020 Democratic presidential field.”

“But while other candidates launch broadsides against Sanders — both on policy and personality — Warren is has been more limited in her ability to attack, both because of some overlap in their support but also because of mutual policy underpinnings to their campaigns.”

Even Tom Steyer beat out Biden’s spending despite the fact that Steyer dropped out of the race Saturday night. Steyer spent more than $1,600 for each vote he received in Democrats’ first four presidential nominating contests, the Daily Beast reports.

Sen. Bernie Sanders told the San Francisco Chronicle he would only pick a running mate who backs Medicare-for-all.

Said Sanders: “We will pick somebody who knows the experience of working families in this country, who has a history of fighting for those families, and somebody whose politics are similar to mine.”

He also sounded a warning against the party trying to deny him the nomination if he comes to Milwaukee with a plurality of pledged delegates: “I think that would look terrible, and I think that would lay the groundwork for a Trump victory. It would reflect on the Democratic Party in a very, very terrible way.”

Tim Miller: “Before the Sunday night split screen with Pete Buttigieg I didn’t think it was possible for Mike Bloomberg to look any smaller. But he found a way.”

“Last night, Mayor Pete made a painstaking and selfless decision to step away from the Democratic primary, despite having won the Iowa Caucus, despite his unfathomably groundbreaking campaign as the first credible openly gay presidential candidate, despite the fact that a number of contenders who had performed far worse than him at the ballot box are stubbornly pressing forward.”

“And meanwhile, across the country Mayor Mike Bloomberg was spending another $1.5 million on a prime time infomercial in his vainglorious attempt to salvage some Super Tuesday delegates, despite having not yet having earned a single vote, despite face-planting in the debates, and despite running a campaign that was only groundbreaking in the sense of the spending levels from an individual candidate.”

“The contrast between the probity of these two men’s actions and the political ramifications for each couldn’t be more stark.”

Jonathan Bernstein: “The results in Nevada provided the structure for the nomination contest that everyone had been waiting for all along. By finishing second, Biden became the Sanders alternative — and by winning big, Sanders made it necessary for those who didn’t want him to be the nominee to settle for whatever alternative was available. That theory is consistent with the polling, which shows Biden improving immediately after Nevada. If it’s correct, then we can think of Clyburn’s endorsement as an effect of Nevada as much as it may have been a cause of what happened in South Carolina.”

“This is consistent with reporting from on-the-trail journalists such as the Washington Post’s David Weigel. It’s also consistent with what the political science literature says about most voters in primaries: They often don’t focus on the contest until right at the end, and they don’t really want to consider all of the candidates who have been running — they just want some signal about which ones are the serious contenders.”