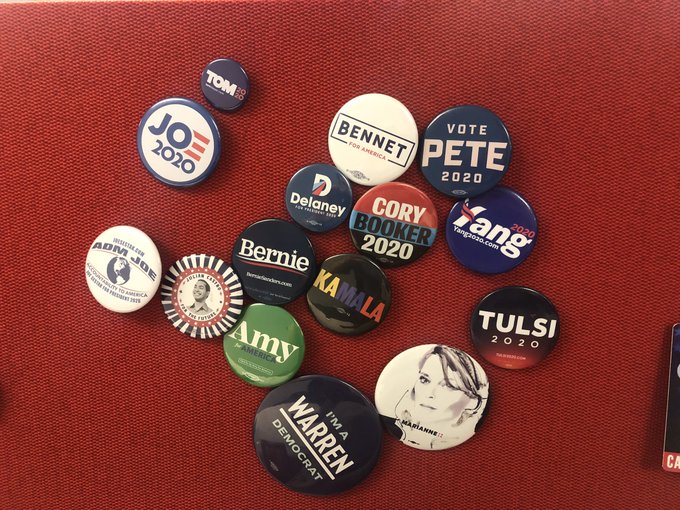 A new Yahoo News/YouGov poll suggests that Bernie Sanders could be a riskier nominee than his supporters are willing to admit. In a national trial heat with President Trump, Sanders led 48% to 42% among registered voters. Yet when the playing field was narrowed to the 10 states that were closest in the 2016 presidential election and that will likely decide 2020 — Michigan, New Hampshire, Wisconsin, Pennsylvania, Florida, Minnesota, Nevada, Maine, North Carolina and Arizona — Sanders’s lead over Trump was slashed in half (48% to 45%). That 3-point gap was within the margin of error.

Both Elizabeth Warren (47% to 45%) and Pete Buttigieg (46% to 44%) performed about as well as Sanders in the battleground states. The weakest performer was Michael Bloomberg (43% to 43%).

Rachel Bitecofer: “Party-loyalty voting in 2018 was typical, with 94 percent of all House votes cast by Republicans going to Republican candidates and 95 percent of Democrats voting for Democratic candidates, following the pattern of the past two decades. Senate party loyalty is only a little weaker — averaging 92 percent in 2018 and displaying little variation from the cycles before Trump.”

“The real change was who showed up to the polls — more women, young people (who increasingly live in suburbs), Latinos, Asian Americans and African Americans — not loyal voters who flipped. That meant electorates favorable for Republicans in 2014 became electorates favorable for Democrats in 2018. The real “swing” is the decision to vote at all, a choice driven largely by the backlash to Trump.”

Jonathan Chait: “The more it looks like no one will win a majority, the more the also-rans have an incentive to stay in and win enough delegates to hope to have some clout at the convention. Take, for example, Amy Klobuchar. After disappointing in Nevada, Klobuchar no longer appears to have any realistic chance at winning the nomination. She’s polling in single digits nationally and in South Carolina; her plausible path involved Biden’s collapse, which was certainly possible but hasn’t happened. Still, Silver’s model projects her to win about 65 delegates if she sticks around. That’s not much, but if her delegates would vote for the candidate of her choice in a contested convention, it might be worth the costs of staying in.”

“The same is probably true at this point for Elizabeth Warren and Pete Buttigieg, although at least they are close enough to second place in the South Carolina polls that they might hope to surprise there and get a bounce in the Super Tuesday contests. As for Michael Bloomberg, who isn’t on the ballot on Saturday but will finally compete on Tuesday, it’s been true from the start and continues to be true that the most likely effect of his campaign is to split the mainstream liberal vote and make Sanders the nominee.”

The Economist: “Start with the absurdity of counting on Mr Sanders’s moderate rivals to peg him back. They are the main reason for his rise. There are too many of them and none is a standout. Their bickering over tiny differences has fragmented the center-left—and is utterly dull. This center-left logjam has made Mr Sanders’s small left-wing base more potent, his leftist rhetoric more distinctive and, until now, his candidacy only indirectly threatening to his main rivals, which is why they hardly attacked him.”

“The vanity campaigns of the Democrats’ billionaires have been even more helpful to him. Tom Steyer, a retired financier with no original ideas, has risen in South Carolina at Mr Biden’s cost by outspending the field. Mr Bloomberg, whose lavish campaign and dire political skills (again on display in Charleston) are drawing inevitable comparisons with the Wizard of Oz, has also badly reduced Mr Biden in the Super Tuesday states. Mr Sanders would be in a weaker position without them.”

“The only way his rivals could pull back the populist senator would be by quitting and thinning the field. But, having a well-judged sense of each other’s weaknesses, they will not.”

The Economist: “Should Mr Sanders win the nomination, November’s election will pit a right-wing nativist with authoritarian tendencies who wants to Keep America Great against a democratic socialist who wants to turn it into the Sweden of the 1970s. The horseshoe theory of politics holds that the extreme left and extreme right sometimes resemble one another more than might be thought. Mr Sanders does not share Mr Trump’s contempt for the rule of law, which is important. But they do share a populist dislike of elites.”

Politico: “When Harry Reid needed to clinch a deal to save the beleaguered Veterans Affairs Department in 2014, he left much of it to Bernie Sanders. Three years later, when Chuck Schumer sought a powerful ally to build public support to save Obamacare, the new Democratic Senate leader teamed up with Sanders to hold a rally in Michigan.”

“Despite his anti-establishment rhetoric and a handful of high-profile breaks with his party over 29 years in Congress, the Vermont independent is typically not the headache for his Democratic leadership that Ted Cruz and Rand Paul once were for the GOP. Sanders, it’s often forgotten, actually serves on Schumer’s leadership team.”

“Sanders has known both Schumer and Speaker Nancy Pelosi for decades — relationships that will become pivotal if Sanders wins the Democratic nomination and the party is fractured. And if Democrats do win the White House and control of Congress, their ability to work together will be crucial.”

Politico: “Bloomberg, who spent months ignoring his Democratic opponents and focusing his firepower on Donald Trump, is still counting on a big delegate haul next week. But several sources close to and involved in the campaign have acknowledged concerns about his recent internal and public polling.”

“They said they were relieved by Bloomberg’s improved debate performance in South Carolina Tuesday night, including his opening attack on Sanders and his handling of a repeat grilling from Elizabeth Warren on his private company’s treatment of women. (After Warren tore into him in the first debate, he agreed to allow women who signed non-disclosure agreements related to him to speak freely.)”

Politico: “Pete Buttigieg is going delegate hunting. Despite a brutal Super Tuesday map unlikely to hand him any statewide wins, the former South Bend mayor is looking to reinforce his claim as a Democratic alternative to Bernie Sanders by racking up delegates in individual congressional districts on Super Tuesday.”

“It’s a national version of Buttigieg’s path to first place in Iowa’s state delegate race — crossing the viability threshold everywhere, pending a recount — which Buttigieg hopes to replicate on Tuesday, when 14 states weigh in on the Democratic primary, despite a splintered field and limited resources.”

“Buttigieg’s campaign said in a memo that its objective on March 3 is to ‘minimize’ Sanders’ margins and maximize ‘delegate accumulation by district, not states.’ Anticipating a drawn-out primary process, Buttigieg is looking to survive deeper into the calendar, making it to mid-March contests in the Midwest that might provide more opportunities for him.”

New York Times: “The no-end-in-sight nature of the contest for the Democratic nomination is alarming those in the party who are hoping to blunt the momentum of the front-runner, Senator Bernie Sanders of Vermont. The most likely way they believe that could happen — a critical mass of the senator’s rivals drop out so voters can coalesce around a single alternative — seems like the least likely outcome.”

“The irony is thick. Mr. Sanders, the candidate many establishment Democrats fear would have the most trouble beating President Trump in November, is benefiting from some of the same dynamics that helped Mr. Trump stampede to the Republican nomination four years ago.”

“Abraham, who represents Louisiana’s 5th congressional district, said he made the decision to only serve three terms six years ago, but as recently as January, Donald Trump asked him to reconsider. He’s one of more than two dozen Republicans who announced this cycle that they will not to run for reelection in 2020.”

Said project director Travis Ridout: “Clearly, ad spending by both Bloomberg and Steyer is in a whole different league. Traditionally, a lack of money has helped to winnow candidates from nominations races, but that dynamic is different this year in part because there are two candidates with almost unlimited funds.”