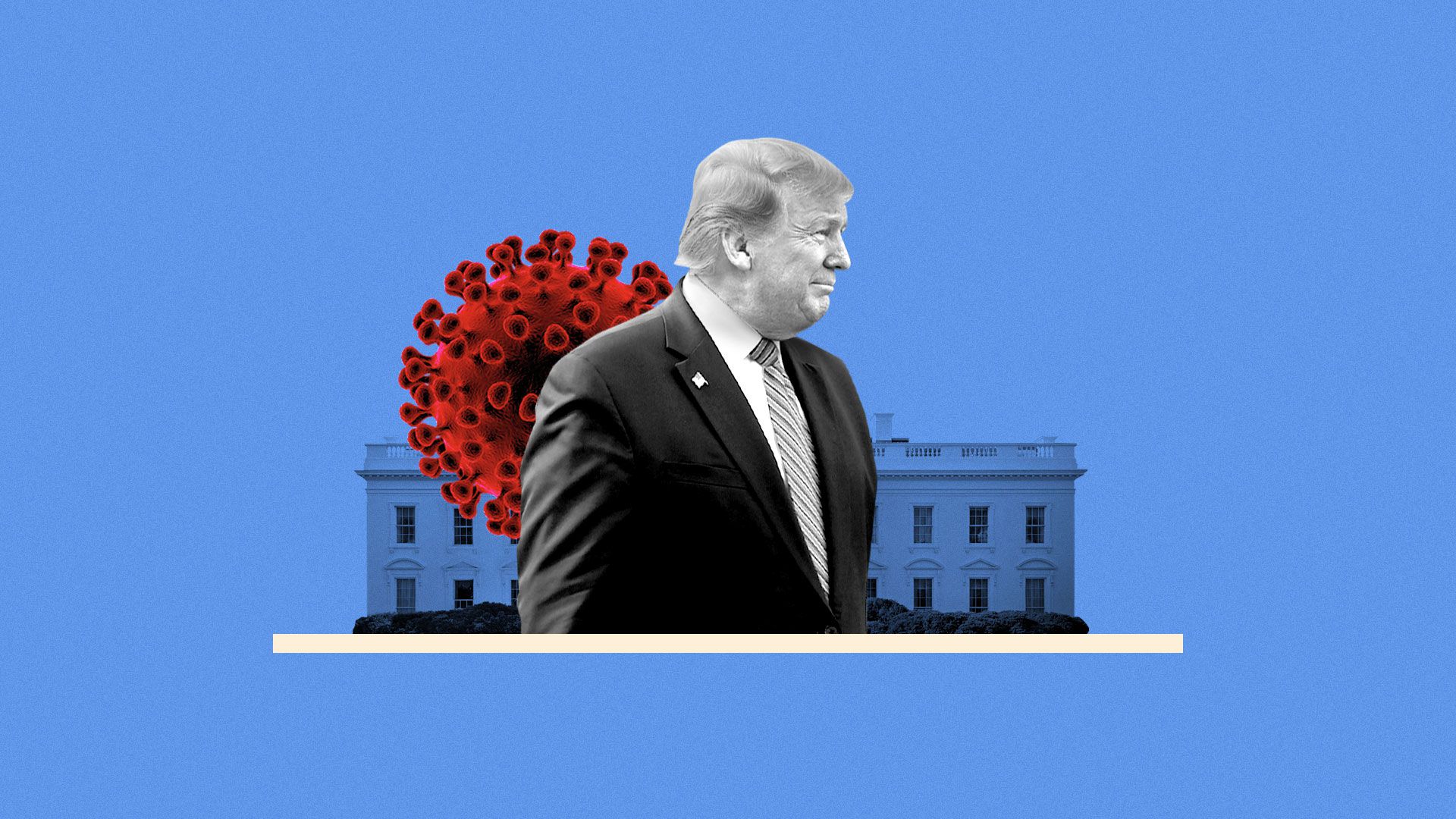 “The White House moved on Thursday to tighten control of coronavirus messaging by government health officials and scientists, directing them to clear all statements and public appearance with the office of Vice President Mike Pence,” the New York Times reports.

“The vice president’s first move appeared to be aimed at preventing the kind of contradictory statements from White House officials and top government health officials that have plagued the administration’s response.”

“Dr. Anthony Fauci, one of the country’s leading experts on viruses and the director of the National Institute of Allergy and Infections Diseases, told associates that the White House had instructed him not to say anything else without clearance.”

Jonathan Bernstein says Trump’s Coronavirus Response has been a disaster: “Yes, he used his usual juvenile nicknames and petty insults for the Democrats he’s going to have to work with. Yes, he blamed the stock market drop on Monday and Tuesday on — wait for it — the Democratic debate Tuesday night. Yes, he repeatedly praised himself for solving the problem (setting up a potential ‘Mission Accomplished’ moment in the likely event the pandemic spreads in the U.S.) and had administration officials praise him as well. All entirely inappropriate and counterproductive.”

“But it was worse than that. He was at times barely coherent even for someone who knew what he was trying to say. I can’t imagine what it was like for the bulk of the nation, folks who only sometimes pay attention to politics but might have tuned in because they want to be reassured that the government is on top of the problem. He must have been almost completely incomprehensible to them, rambling on about how he had recently discovered that the flu can kill lots of people and referring in a totally oblique way to the budget requests he had made to Congress and their reaction. He occasionally said something that sort of made sense, but mostly? Not. Dr. Ezekiel Emanuel’s reaction was what I thought: ‘I found most of what he said incoherent.’”

“At no time over the course of the news conference did Trump supply evidence that he had any idea what he was talking about.”

“The discovery that a California woman was likely infected with the novel coronavirus by a previously unrecognized case in her community is proof of an enormous problem the country is facing at the moment, according to public health experts. It’s clear that the virus is spreading undetected in the United States — but how broadly it’s spreading is an utter mystery,” STAT reports.

“Before Thursday, a perfect storm of problems in the Centers for Disease Control and Prevention’s development of test kits — and the agency’s reluctance to expand its recommendation of who should be tested given the limited availability of kits — meant very little testing has been done in the country. As of Wednesday, the CDC said that 445 people had been tested — a fraction of the number of tests that other countries have run.”

“Former Baltimore Mayor Catherine Pugh, who held elected offices in Baltimore for two decades and was elevated by voters to lead the city following the upheaval of 2015, was sentenced to three years in federal prison Thursday for a fraud scheme involving a children’s book series,” the Baltimore Sun reports.

“Federal health employees interacted with Americans quarantined for possible exposure to the coronavirus without proper medical training or protective gear, then scattered into the general population, according to a government whistle-blower,” the New York Times reports.

“Without proper training or equipment, some of the exposed staff members moved freely around and off the bases, with at least one person staying in a nearby hotel and leaving California on a commercial flight. Many were unaware of the need to test their temperature three times a day.”

Washington Post: “The whistleblower is seeking federal protection because she alleges she was unfairly and improperly reassigned after raising concerns about the safety of these workers to HHS officials, including those within the office of Health and Human Services Secretary Alex Azar.”

Stocks continued taking a significant tumble Thursday, entering correction territory, as investors’ fears grow regarding the spread of coronavirus, as well as the incompetence of the Trump Administration.

The S&P 500 closed down 4.4% on Thursday. The Dow Jones Industrial Average closed down 4.4% as well. A chart from Deutsche Bank showed that the S&P entered correction territory — where stocks fall 10% below their peak — faster than ever before.

“[T]he end of affluence politics means focusing on whether medicine is on shelves, not bitter disputes over bloated and wasteful hospital and insurance billing departments. It means caring about bureaucratic competence in government, and accuracy in media, not because these are nice things to have but because they are necessary to avoid immense widespread suffering. It means understanding that pharmaceutical mergers that benefit shareholders while laying off scientists are destructive, not just because they are unfair, but because they make us less resilient to disease. (Shareholders, as it turns out, also have lungs.) Finally, it means recognizing that wealth, real wealth, is not defined by accounting games on Wall Street, but the ability to meet the needs of our own people.

“We came to these realizations once before in 1932, and created a vibrant democratic state over the following few decades—one that rapidly expanded our life spans, defeated the Nazis, and helped create Silicon Valley. The convergence of the Covid-19 outbreak and the presidential election will force us to do it once again. We’ve lived in the world of unreality for far too long.

“As Richmond Federal Reserve Bank president Tom Barkin recently put it, ‘Central banks can’t come up with vaccines.’ It’s time to get ready for what that implies.”

The ex-Ukrainian prosecutor who helped fuel President Trump’s smear campaign against the Bidens secured a court ruling forcing Ukraine to open an investigation into his allegations, several outlets reported Thursday.

The prosecutor Viktor Shokin went to court to demand the investigation earlier this year, just as the Senate’s impeachment proceedings against Trump were coming to a close. His previous request with Ukraine’s State Investigation Bureau had gone nowhere, and Shokin’s claims about the Bidens have largely been debunked.

However, Ukrainian law allows for alleged victims to use a court process to force the State Bureau of Investigations to investigate their claims. The bureau confirmed the Shokin-desired investigation had been launched, according to the Washington Post, and experts noted to the Post that the timing indicated that it had done so in response to the court ruling.

The Kyiv Post, meanwhile, described Shokin’s success in getting the probe launched as a “legal technicality” and one that was “unlikely to lead to any serious investigation.”

“A Trump nominee to serve on a court that hears claims against the government once argued that several federal agencies should be eliminated and that Social Security should be abolished because economic disparity ‘is a natural aspect of the human condition,’” the Washington Post reports.

Scotland’s government is being urged to seek an “unexplained wealth order” to investigate Donald Trump’s deals to acquire his Scottish properties, the Scotsman reports.

“An UWO is a relatively new – and rarely used – power which has been designed to target suspected corrupt foreign officials who have potentially laundered stolen money through the UK.”

“The mechanism, introduced in 2018, is an attempt to force the owners of assets to disclose their wealth. If a suspected corrupt foreign official, or their family, cannot show a legitimate source for their riches, then authorities can apply to a court to seize the property.”

Corey Brettschneider: “Speculation that President Trump might pardon Roger Stone has reached a fever pitch after Stone’s sentencing by a federal judge and the president’s repeated hints that he thinks the verdict unfair. But fortunately, the Constitution’s framers imagined this nightmare scenario—a suspected criminal president pardoning a co-conspirator—and they put in the Constitution language to legally prohibit the pardon power in exactly this kind of case.”

“Many scholars agree that once a president has been impeached, he or she loses the power to pardon anyone for criminal offenses connected to the articles of impeachment. Less noticed is that even after the Senate’s failure to convict the president, he or she does not regain this power.”

“Vice President Mike Pence, already the administration’s point-person with conservatives, evangelicals and advocates for religious freedom, is building up his team to keep them close as the president dives into the 2020 reelection,” the Washington Examiner reports.

Goldman Sachs revised its earnings estimate for the year for U.S. companies to $165 per share, representing 0% growth in 2020, as a result of the coronavirus, CNBC reports.

This is a dramatic break from the consensus forecast of Wall Street, which still calls for earnings to climb 7% this year.

Bloomberg: “The biggest sell-off in U.S. stocks in two years is just getting started, strategists at two of Wall Street’s biggest banks are warning.”

Health and Human Services Secretary Alex Azar, who has been leading the coronavirus task force, was blindsided by the White House decision to put Vice President Pence in charge of the response to the virus outbreak, the Washington Post reports.

Azar learned of the decision only moments before the Wednesday evening press conference.

“One day after briefing the press in an attempt to calm nerves about the spread of the coronavirus, President Trump spent forty-five minutes talking to the lead actors of a low-budget conservative play about the so-called Deep State,” the Daily Beast reports.

“Trump hasn’t seen the play, according to McAleer, but praised its concept: a script based entirely on congressional testimony and the text messages between former FBI agent Peter Strzok and former FBI lawyer Lisa Page, who discussed the FBI’s investigation into Trump’s campaign and Russia while having an affair.”