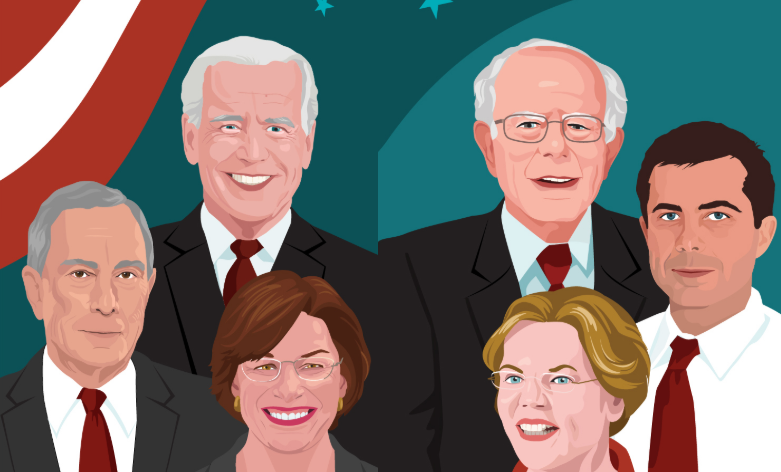 The Monmouth University Poll showed Biden’s support in South Carolina stands at 36%, with Sanders receiving 16% and Steyer at 15%. U.S. Sen. Elizabeth Warren was at 8% and Pete Buttigieg, the former mayor of South Bend, Indiana, had 6%. U.S. Sen. Amy Klobuchar had 4%, and U.S. Rep. Tulsi Gabbard was at 1%.

A new Data for Progress poll in South Carolina finds Joe Biden leading the Democratic primary race with 34%, followed by Bernie Sanders at 25%, Tom Steyer at 13%, Pete Buttigieg at 13%, Elizabeth Warren at 7% and Amy Klobuchar at 5%.

Nate Silver looks at how his forecast model views three plausible scenarios in South Carolina: “a big Biden win (by 10 percentage points or more), a modest Biden win (by less than 10 points) and a Sanders win (no margin specified). As of Wednesday afternoon, the chance of these outcomes happening according to the model was 41 percent (big Biden win), 33 percent (small Biden win) and 23 percent (Sanders win), respectively.”

The bottom line: A big Biden win would reorder the race, but the other scenarios look pretty good for Sanders.

A new Wason Center poll in Virginia finds Joe Biden leading the Democratic field with 22%, followed by Bernie Sanders at 17%, Mike Bloomberg at 13%, Pete Buttigieg at 8%, Elizabeth Warren at 8% and Amy Klobuchar at 5%. Asked if they will support the party’s eventual nominee, 82% of Democratic primary voters say yes, and 67% say “definitely.”

A new CNN poll in Texas finds Bernie Sanders leads the Democratic field with 29%, followed by Joe Biden at 20%, Michael Bloomberg at 18% and Elizabeth Warren is at 15%. No other candidate reaches double-digits.

A new WBUR/MassInc poll in Massachusetts finds Bernie Sanders leading the Democratic primary race with 25%, followed by Elizabeth Warren at 17%, Pete Buttigieg at 14%, Mike Bloomberg at 13%, Joe Biden at 9% and Amy Klobuchar at 6%.

A new UMass Amherst poll in Massachusetts finds Sanders ahead with 25%, followed by Warren at 23%, Buttigieg at 14%, Biden at 12%, Bloomberg at 9% and Klobuchar at 7%.

A new Fox News poll finds Bernie Sanders leading the Democratic field nationally with 31%, followed by Joe Biden at 18%, Mike Bloomberg at 16%, Pete Buttigieg at 12%, Elizabeth Warren at 10% and Amy Klobuchar at 5%.

Also interesting: “There is no hurry to narrow the field. Fifty-four percent of primary voters want candidates to stay in the race even if they failed to finish in the top three in any of the early contests. What’s more, by a 50-38 percent margin, they say the Democratic Party should have the flexibility to nominate someone else if no candidate has a majority of delegates at the convention.”

A new Marquette University Law School poll in Wisconsin finds Bernie Sanders leads in the Democratic primary with 29%, followed by Mike Bloomberg at 17 percent, Joe Biden at 15%, Pete Buttigieg at 13%, Amy Klobuchar at 11% and Elizabeth Warren at 9%.

Meanwhile, in general election match ups, only Sanders beats Trump, 48% to 46%. Biden, Buttigieg and Klobuchar all tie with Trump, while Bloomberg trails Trump by one point and Warren trails by three points.

A new Muhlenberg College poll in Pennsylvania shows President Trump and the leading Democrats in a tight race for the state’s twenty electoral votes. Bernie Sanders is the only one who actually leads Trump in a general election match up, 49% to 46%.

Nearly 80% of likely voters said they thought reducing health care costs should be a high priority for the next president.

Peter Nicholas: “Team Trump views Sanders as the weakest candidate left on the Democratic side, and isn’t eager to do anything to impede his rise, several of the president’s past and present political advisers told me. They seem to see Sanders as a no-lose proposition: The president wins whether the senator from Vermont captures the nomination or not.”

“Should Sanders prevail, Trump’s strategy will be to spotlight his democratic-socialist identity in an attempt to make voters fear he’ll take away their freedom. (Trump will try to brand any Democratic nominee a socialist—Team Trump just thinks it’ll be easier with the guy whose self-description includes the word.)”

“If Sanders falters, Trump will argue that he was unfairly robbed of a nomination he earned. Trump has long stoked suspicions of an anti-Sanders conspiracy within the Democratic Party, for what seems to be two purposes: leaving Sanders’s following so disillusioned that they stay home on Election Day, or perhaps persuading them to switch sides and vote Republican. Sanders may not need Trump, but for the time being, Trump needs Sanders.”

Mike Bloomberg told the Houston Chronicle he would shutter his presidential campaign operation if Bernie Sanders won the nomination and rejected his support, as an aide to the frontrunner pledged to do earlier this week.

Said Bloomberg: “What do you mean, I’m going to send a check to somebody and they’re not going to cash the check? I think I wouldn’t bother to send the check.”

Sen. Tim Kaine (D-VA) endorsed Joe Biden for the Democratic presidential nomination, the Washington Post reports. Said Kaine: “It is sad to have a President who no one holds up as a role model for America’s kids. By contrast, Joe Biden has exemplary heart, character, and experience.”

A new Morning Consult survey found that 26% of Democratic primary voters believe former President Barack Obama has endorsed Michael Bloomberg for president and 25% think he’s endorse Joe Biden. However, Obama has not yet endorsed any candidate.

“Pete Buttigieg, whose presidential campaign was a surprise fundraising machine in the lead-up to 2020, is counting on a stripped-down, grassroots-driven style of organizing to keep his candidacy alive in and after next week’s Super Tuesday primaries,” BuzzFeed News reports.

As of this morning, the FiveThirtyEight forecast shows a 51% chance that no one will win a majority of delegates before the Democratic convention. That outcome would result in the first contested convention since 1952.

A new ABC News/Ipsos poll of finds Bernie Sanders is considered the strongest contender among an engaged Democratic base of debate watchers to take on President Trump in November.

A new Goldman Sachs report is warning Wall Street that the coronavirus outbreak could cost President Trump the election in November, CNN reports. From the report: “If the coronavirus epidemic materially affects US economic growth it may increase the likelihood of Democratic victory in the 2020 election.”

Moody’s Analytics chief economist Mark Zandi said he now sees a 40% chance of a US recession during the first half of 2020, up from 20% previously.

“The country’s new point man on coronavirus response, Vice President Mike Pence, is expected to travel to Florida on Friday — but not on a public health mission,” the Tampa Bay Times reports.

“Instead, Pence is headed to the moneyed barrier island town of Longboat Key, where he’ll be the main attraction for Congressional Republicans in one of their biggest fundraisers of the year.”

Boston Globe: “On the cusp of Super Tuesday contests next week that could put Sanders on a fast-moving path to the Democratic presidential nomination, he has begun toning down his rhetoric a bit, distancing himself from his own calls for ‘revolution’ and serving up a more suburban-friendly twist to his sweeping policy platform while highlighting more of his biography.”

Politico: “Warren is at risk of losing her home state, the latest indignity in her long slide in the polls in her own backyard. As recently as October, the two-term senator held a 20-percentage point lead over Sanders, according to a WBUR poll. According to the latest public poll, she trails him by one point. Now, in the run-up to the March 3 primary, Sanders is going all in on his bid to pick off Massachusetts, culminating in a four-day music and canvassing festival in Worcester that begins Friday.”

Politico: “Just as his White House bid appeared to be sputtering to an ugly end, there are signs of life for Joe Biden still. And perhaps more than that. A second-place finish in Nevada, a major endorsement in South Carolina, a strong debate Tuesday and a pair of polls showing him with a staggering lead here have given new hope to his campaign.”

“Money is flowing anew into his war chest, as well as to a super PAC supporting him. Armed with those data points, the campaign and super PAC are telling donors that Biden — given his strength among African-American voters and momentum kicking in at the right time — is quickly emerging as the alternative to frontrunner Bernie Sanders.”