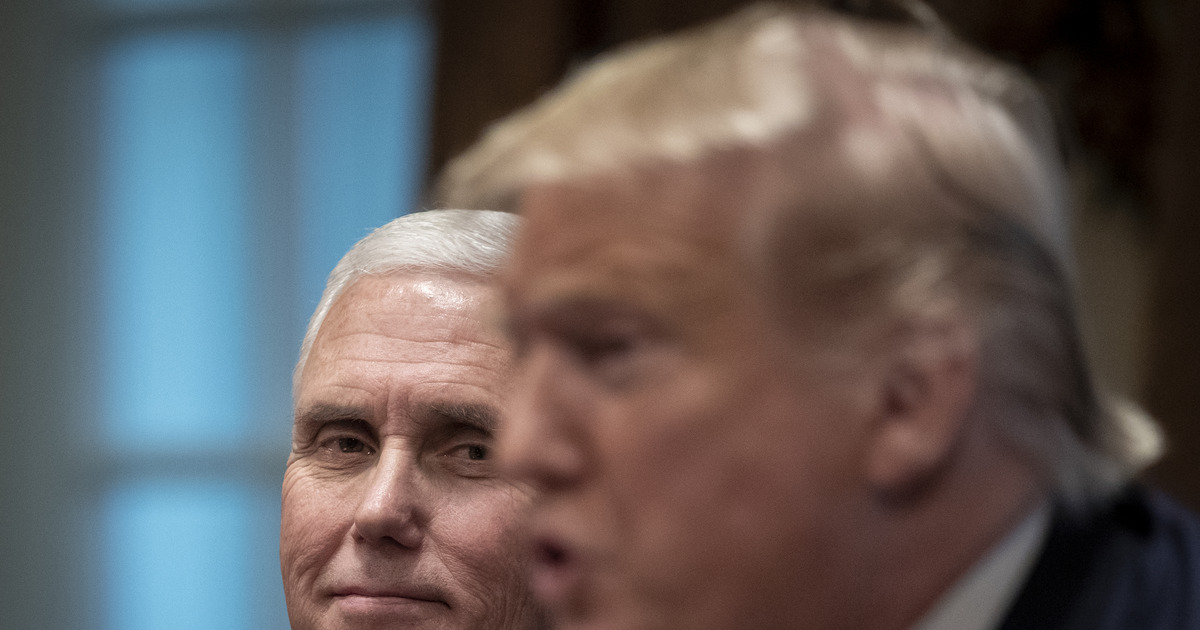 Amid mixed messages from the Trump administration regarding how it plans to address growing fears surrounding the spread of coronavirus in the U.S., President Trump announced Wednesday evening that Vice President Mike Pence will be in charge of addressing it. So, I guess we are all going to be told to pray a lot to mother.

Trump’s announcement comes on the heels of bipartisan criticism from lawmakers about his administration’s handling of the coronavirus outbreak. Politico reported Tuesday that the administration was considering the creation of a “coronavirus czar” whose job would be similar to Ronald Klain’s role as the Obama White House’s Ebola Response Coordinator. Trump said he didn’t think of Pence as a “czar,” since he is in the administration.

While Trump spoke, the Washington Post reported Wednesday evening that the first coronavirus case in the U.S. of unknown origin was confirmed in northern California.

Playbook: “The key during public health crises is trust. Do you trust that the administration is being honest with you, and can handle a virus that seems to be spiraling out of control, and putting American citizens like you at risk?”

“On Tuesday, you had President Trump saying that the coronavirus was under control, while officials in the U.S. government were saying it was dangerous. Who do you trust, and when they make a move, how do you trust that what they’re doing is the right thing to do?”

Washington Post: “At least publicly, Trump has devoted the majority of his public statements to slamming Democrats or complaining about the criminal justice system. But he has not publicly engaged much about the coronavirus, other than to play down what he believes the impact will be on the United States. Privately, Trump has become furious about the stock market’s slide.”

Washington Post: “Regulations set forth by the CDC give health officials broad authority to quarantine or isolate anyone ‘reasonably believed’ to have been exposed to a range of highly infectious diseases. The list includes cholera, infectious tuberculosis and flus that can cause a pandemic.”

“The government’s powers to sequester people in the name of public health are rooted in the Constitution’s Commerce Clause, which allows Congress to regulate foreign and interstate commerce.”

The House Oversight Committee released an email from then-Georgia Secretary of State Brian Kemp (R) which told aides “good work” after a newspaper story exposed problems in the way voters were removed from electoral rolls.

He added: “Good work, this story is so complex folks will not make it all the way through it.”

The 2017 story in the Atlanta Journal-Constitution detailed how local election officials were inaccurately removing people from the rolls.

Seventy former senators from both parties wrote an open letter arguing that the U.S. Senate isn’t functioning as the Founders intended.

“The Senate’s abdication of its legislative and oversight responsibilities erodes the checks and balances of the separate powers that are designed to protect the liberties on which our democracy depends.”

Speaker Nancy Pelosi told NBC News that she is comfortable with Bernie Sanders as a potential nominee and doesn’t think he would jeopardize the House majority.

Said Pelosi: “I think whoever our nominee is, we will enthusiastically embrace and we will win the White House, the Senate and the House.”

“The White House this week confirmed it is combing through federal agencies to identify employees not sufficiently loyal to President Trump to facilitate their ouster, sparking concerns the administration could run afoul of long-established civil service laws,” Government Executivereports.

“The administration is examining employees throughout the government to find anyone taking action officials decide represents an effort to undermine Trump, White House spokesman Hogan Gidley said on Fox News Monday. Gidley did not specifically mention career employees, who are statutorily protected against political retaliation, but did note the ‘millions’ of individuals agencies employ. By contrast, there are only about 4,000 political appointees in government.”

“President Trump is tightening his grip on the intelligence community as part of a post-acquittal purge of career officials and political appointees deemed insufficiently loyal, and the abrupt firing of his last intel chief is only the tip of the iceberg,” Politico reports.

“Trump’s decision to replace acting Director of National Intelligence Joseph Maguire with a loyalist with no intelligence experience, Ric Grenell, shocked the national security world and has raised questions about who the president will nominate to serve in the post after Grenell’s ‘acting’ status expires next month. In India, Trump hinted that his decision would come soon.”

“But it also revealed a deeper trend: namely, the steps Trump has taken to shield the public from intelligence that could be politically damaging for him, and keep the flow of information coming out of the agencies firmly under his control.”

Politico: “The White House has hired a college senior to be one of the top officials in its powerful Presidential Personnel Office.”

“James Bacon, 23, is acting as one of the right-hand men to new PPO director John McEntee… Bacon, a senior at George Washington University pursuing a bachelor’s degree, comes from the Department of Transportation, where he briefly worked in the policy shop. Prior to that role, while still taking classes, he worked at the Department of Housing and Urban Development, where he was a White House liaison.”

“House Democrats will be briefed Thursday by the Democratic National Committee on the power of superdelegates — who could play a decisive role if the presidential primary enters a contested convention with no clear nominee in July,” Politico reports.

“Speaker Nancy Pelosi told her caucus about the upcoming briefing on Wednesday as lawmakers returned to the Capitol for their first gathering after a nearly two-week recess.”

FiveThiryEight currently forecasts a 44% chance of a contested convention.

The bombshell revelation is contained in Pataki’s upcoming memoir of 9/11, Beyond the Great Divide: How A Nation Became A Neighborhood.

President Trump’s campaign is suing the New York Times for libel over an opinion piece that claimed his campaign had an “overarching deal” with Russian President Vladimir Putin to trade election help for a “new pro-Russian foreign policy.”