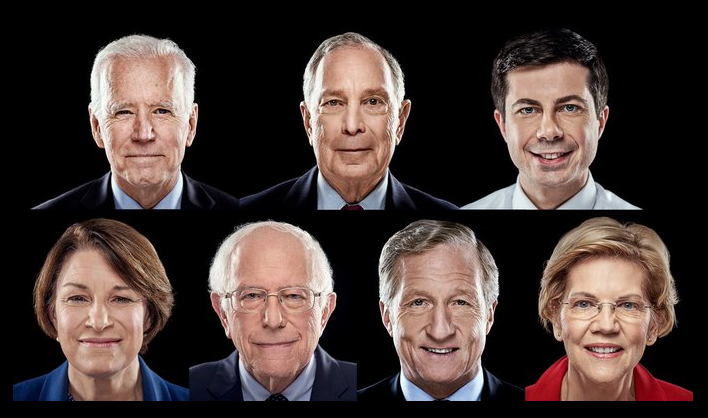 A new Clemson University poll in South Carolina shows Joe Biden leading the Democratic primary with 35%, followed by Tom Steyer at 17%, Bernie Sanders at 13%, Elizabeth Warren at 8%, Pete Buttigieg at 8% and Amy Klobuchar at 4%.

A new East Carolina University poll of the South Carolina primary finds Joe Biden leading the Democratic field with 31%, followed by Bernie Sanders at 23%, Tom Steyer at 20%, Elizabeth Warren at 8%, Pete Buttigieg at 6%, Amy Klobuchar at 2%. There are 8% still undecided.

A new national Economist/YouGov poll finds Bernie Sanders leading the Democratic presidential field with 30%, followed by Joe Biden at 20%, Elizabeth Warren at 16%, Mike Bloomberg at 11%, Pete Buttigieg at 9% and Amy Klobuchar at 4%.

A new Public Policy Polling survey in Texas finds Joe Biden and Bernie tied in the Democratic primary race with 20%, followed by Elizabeth Warren at 17%, Mike Bloomberg at 12%, Pete Buttigieg at 11% and Amy Klobuchar at 7%.

Key takeaway: If Bloomberg were not on the ballot, Biden would lead Sanders 31% to 25%.

Rep. Jim Clyburn (D-SC) endorsed Joe Biden in the Democratic presidential race, which could give the former vice president a much-needed boost in the South Carolina primary race.

Said Clyburn: “I know Joe Biden. I know his character, his heart, and his record. Joe Biden has stood for the hard-working people of South Carolina. We know Joe. But more importantly, he know us. In South Carolina, we choose presidents. I’m calling on you to stand with Joe Biden.”

Josh Marshall: “Jim Clyburn’s endorsement of Joe Biden is a big deal for South Carolina. Clyburn is the third ranking member of the House leadership and an institution in the state. Endorsements generally don’t make a huge difference. And I doubt this one will make a huge one. But we’re now all down to margins. So it’s important.”

Joe Biden said that some of his 2020 Democratic primary rivals should consider exiting the race if they are unable to demonstrate an ability to win over minority voters in the upcoming South Carolina primary, the Charleston Post & Courier reports.

Said Biden: “They would have to consider dropping out, not because I want them to or anybody else does, but because the victories and losses are going to dictate it.”

Jonathan Bernstein: “Indeed, the first problem with this debate was that — after a Nevada showdown in which each of the six candidates on stage could argue that he or she had a plausible way to win the nomination — at this point it’s hard to see anyone but Sanders and Biden with a serious chance, given the results so far, the polls, and the resources they each have. Steyer aside, that’s less about a flawed debate invitation process than about no one dropping out after Nevada, but it’s a real failure of the system.”

“Back to the process. To start with the most obvious thing: Everyone in the U.S. and at least half of the rest of the world was talking about coronavirus on Tuesday — and the stock market cratering amid fears of serious damage to the economy — yet the moderators didn’t get around to that issue until well into the second hour of the debate. In fact, there were hardly any policy questions in the first hour at all, with the moderators instead inviting candidates to pick fights with one another and pushing them on recent campaign controversies.”

“In other words, the debate on CBS wasn’t much different from recent ones on NBC and CNN. For better or worse, that’s how the journalists who run these things want it. They hope sparks will fly, and they want to be seen as asking tough questions.”

“But that doesn’t serve the interests of the party.”

James Hohmann: “Sanders weathered the heavily anticipated, two-hour barrage of attacks from his six opponents by sticking relentlessly to the populist message that got him here. At several key moments, he offered a master class in deflection. On one hand, this can be viewed as impressive message discipline from a candidate who has successfully claimed the mantle of an insurgent outsider. On the other, it could be described as sloganeering and the oversimplifying of complex issues by someone who has served in Congress since 1991.”

“Either way, the debate served as a reminder that Sanders, despite his unconventional candidacy, is more pragmatic than popularly understood.”

Bernie Sanders will hold a big rally in Minnesota the night before Super Tuesday, making an effort to win the home state of primary rival Amy Klobuchar, the AP reports.

“Joe Biden’s campaign is launching advertising in Super Tuesday states — but the small ad buy leaves the former vice president significantly outmatched by most of his Democratic rivals as 14 states prepare to vote on March 3,” Politico reports.

Greg Sargent: “The ad hitting Biden from the Committee to Defend the President is a remarkable piece of work: It weaponizes audio of former president Barack Obama against Biden, in what is clearly an effort to turn African American voters against him.”

President Trump’s campaign “said it would lease 15 retail properties in predominantly black neighborhoods across swing states like Florida and Pennsylvania, where it will build welcoming ‘community centers’ that sell merchandise, register voters and spread the word about Trump policies that have helped black communities,” the New York Times reports.

Axios says the campaign plans to open 15 field offices: five in Florida, three in North Carolina, two each in Ohio and Pennsylvania, and one each in Georgia, Michigan and Wisconsin.

Mike Bloomberg has vowed as a Democratic candidate for president to “strengthen entitlement programs,” CNN reports.

But when he was mayor of New York City, Bloomberg twice compared Social Security to a “Ponzi scheme” and repeatedly said cuts to that program as well as Medicare and Medicaid had to be part of any serious solution to reducing the federal deficit.

Said Bloomberg: “I don’t know if Bernie Madoff got his idea from there, but if there’s ever a Ponzi scheme, people say Madoff was the biggest? Wrong. Social Security is, far and away.”