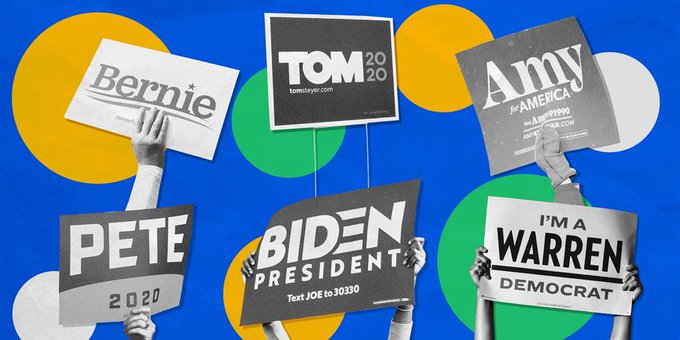 A new national CBS News/YouGov poll finds Bernie Sanders leading the Democratic presidential field with 28%, followed by Elizabeth Warren at 19%, Joe Biden at 17%, Michael Bloomberg at 13%, Pete Buttigieg at 10% and Amy Klobuchar at 5%.

A new Siena poll in New York finds Bernie Sanders leads the Democratic primary field with 25%, followed by Mike Bloomberg at 21%, Joe Biden at 13%, Elizabeth Warren at 11%, Pete Buttigieg at 9% and Amy Klobuchar at 9%.

A new Minnesota Public Radio/Star Tribune Minnesota poll finds Amy Klobuchar leading the Democratic presidential field in her home state with 29%, followed by Bernie Sanders at 23% and Elizabeth Warren at 11%. No other candidate polled in double digits and 21% said they remain undecided.

A new University of Houston poll in Texas finds Joe Biden and Bernie Sanders tied in the Democratic presidential race with 22%, followed by Elizabeth Warren at 18%, Mike Bloomberg at 13%, Pete Buttigieg at 12% and Amy Klobuchar at 7%.

A new NBC News/Marist poll in South Carolina find Joe Biden leading the Democratic primary field with 27%, followed by Bernie Sanders at 23%, Tom Steyer at 15%, Pete Buttigieg at 9%, Elizabeth Warren at 8% and Amy Klobuchar at 5%.

A new Public Policy Polling survey in South Carolina finds Joe Biden leading the Democratic field with 36%, followed by Bernie Sanders at 21%, Elizabeth Warren at 8%, Pete Buttigieg at 7%, Tom Steyer at 7% and Amy Klobuchar at 3%.

Marianne Williamson made a surprise appearance at Sen. Bernie Sanders’ rally Sunday in Austin, Texas, to announce her endorsement of the Democratic front-runner, CNN reports.

“Sen. Bernie Sanders’ big win among Latinos in Saturday’s Nevada caucuses underscores the potential for the nation’s largest minority group to reshape the next stage of the Democratic presidential race,” CNNreports.

“Almost all of the states with a large Latino population will vote in just the next four weeks: Nevada led the way Saturday, followed by Texas, California and Colorado on March 3, or Super Tuesday, and Arizona, Florida and Illinois on March 17.”

“Cumulatively, the seven states with large Latino populations looming on the calendar will elect nearly half the Democratic delegates at stake in February and March.”

“Lots of Democrats are in full panic that Bernie Sanders will win the nomination and get clobbered in the general election — and bring the party down, too. But the evidence, particularly the polling, doesn’t back those doomsday warnings,” Axios reports.

“Virtually every national and swing state poll shows Sanders tied with or beating President Trump.  And, unlike every rival, he has a huge base of fervent, unshakable supporters he can only grow.”

“Moderate Democrats watched in horror as Bernie Sanders soared to a landslide victory in Nevada,” Politico reports. “It wasn’t the win that was surprising — it was the walloping Sanders gave his opponents, his ability to dominate among Latino voters, and the momentum he gained moving into South Carolina and Super Tuesday. The performance sent already worried Democrats into a full-blown panic.”

Everyone needs to calm the fuck down and read my thoughts from yesterday.

Larry Sabato’s Crystal Ball: “We can’t necessarily assume that the shape of the race would be much different if the alignment of candidates changed. If Bloomberg or Pete Buttigieg or Elizabeth Warren or Amy Klobuchar or other candidates dropped out today, it’s not a sure thing that their supporters would completely flock to non-Sanders candidates.”

“Sanders is well-liked by Democrats, and recently he has been leading other contenders in hypothetical one-on-one matchups. An Associated Press-NORC poll conducted in the aftermath of the New Hampshire primary showed Sanders with the best favorability among Democrats of any of the candidates. While Democratic elites are starting to sound the alarms about Sanders and his potential weaknesses against Donald Trump, the Democratic rank and file seems fairly comfortable with him as the nominee.”

“The other candidates, and party leaders who are worried about Sanders’ ability to lead the Democratic ticket, have precious little time to make Democratic voters as uncomfortable with Sanders as some of them seem to be. Otherwise, he’s going to be the nominee, and Republicans will work to turn Democratic fears about Sanders’ far-left politics into realities.

“The former vice president’s team sees his proposals as especially important in aiding African Americans and Latinos… The plan was released less than a week before the Feb. 29 South Carolina primary, where more than half of Democratic voters are black, but also before Super Tuesday on March 3, when California — which is facing a dramatic housing and homelessness crisis — casts its primary votes.”

“As the rest of the top Democratic presidential candidates competed for delegates in Nevada and held rallies in Super Tuesday states all weekend, Michael Bloomberg kept away from the public eye,” the Wall Street Journal reports.

“He was instead preparing for another debate, seeking to head off a repeat of a lackluster performance that rattled even his supporters.”

“Mr. Bloomberg attended a campaign event in Utah the morning after Wednesday’s debate in Las Vegas but has since held no public events, spending his time once again preparing for questions he had already studied for—and yet stumbled through in the last gathering. He is also preparing to attack front-runner Bernie Sanders directly, hoping to go on the offensive in the coming debate.”

“Stacey Abrams has her sights set on the White House, and the former minority leader of the Georgia House of Representatives is already laying the groundwork for a future campaign,” McClatchy reports.

Said Abrams: “I will run for president when it’s appropriate, and I don’t know when that is.”

“Between now and the 2024 presidential election much could change for Abrams, 46, and on the political landscape. She has been seen as a potential running mate for the 2020 Democratic presidential nominee for nearly as long as there has been a campaign. She has also signaled that she could challenge Kemp again for the governor’s mansion in 2022.”

Mike Bloomberg is out with a new ad saying Bernie Sanders is “beholden” to the gun industry. “The NRA paved the road to Washington for Bernie Sanders. He spent the next three decades making sure they got a return on their investment. We deserve a president who is not beholden to the gun lobby.”

Terry Sullivan: “We’ve seen this movie before, but for some reason the critics seem convinced it will have a different ending this time: A bombastic septuagenarian political outsider calls out a rigged system to the cheering masses. He finishes second in Iowa and first in New Hampshire and Nevada. He leads all the national polls while the establishment candidates wage all-out war on one another. Meanwhile, the media dismisses his chances and an increasingly worried political establishment convinces itself it’s only a fluke, that the worst case is a chaotic convention that ultimately nominates a mainstream candidate.”

“You’d think we political types would know better by now. The most important thing I learned managing Sen. Marco Rubio’s 2016 presidential race was that the old political norms were dead. Experts and pundits’ predictions were often no more than guesses based on the way things used to be. Media groupthink only made these outdated and misguided notions more stubborn.”

“Am I the only one who was embarrassed enough at missing the 2016 political movement that elected Donald Trump that I rethought my approach to modern politics?”

“Mike Bloomberg’s presidential campaign plans to unleash its cash-flush media operation against Bernie Sanders in the wake of the Vermont senator’s resounding victory in the Nevada caucuses,” CNBC reports.

“The campaign plans a multipronged attack, including the publication of opposition research on Sanders, these people said. It will also push out digital attack ads focused on Sanders’ record.”

“The attacks on Sanders, who has accused Bloomberg of trying to buy the Democratic nomination, will also attempt to highlight negative aspects of his record on race relations both as a congressman and senator, the sources said. This comes after Sanders, now seen as the Democratic front-runner, has taken aim at Bloomberg for his support of a policing policy known as stop-and-frisk that often targeted black and Latino people.”

David Corn: Why Bernie Sanders should welcome negative ads against him.

I agree. Look at it this way, these same attacks are coming from Trump and the Republicans. So if Bernie survives this (and I think he will), he will be that much stronger and inoculated against the attacks. If he doesn’t, he doesn’t deserve to be the nominee.

Mike Bloomberg said at a private event in 2016 that his presidential campaign platform would have been to “defend the banks” and also labeled Sen. Elizabeth Warren as “scary,” CNN reports.

Bloomberg also criticized President Barack Obama, saying that his 2012 endorsement of Obama was “backhanded” and that he thought Mitt Romney could have done a better job if he’d been elected.

Audio of his comments were anonymously sent to CNN by an email address called “CancelGoldman,” with the author claiming he worked at Goldman Sachs for 14 years.