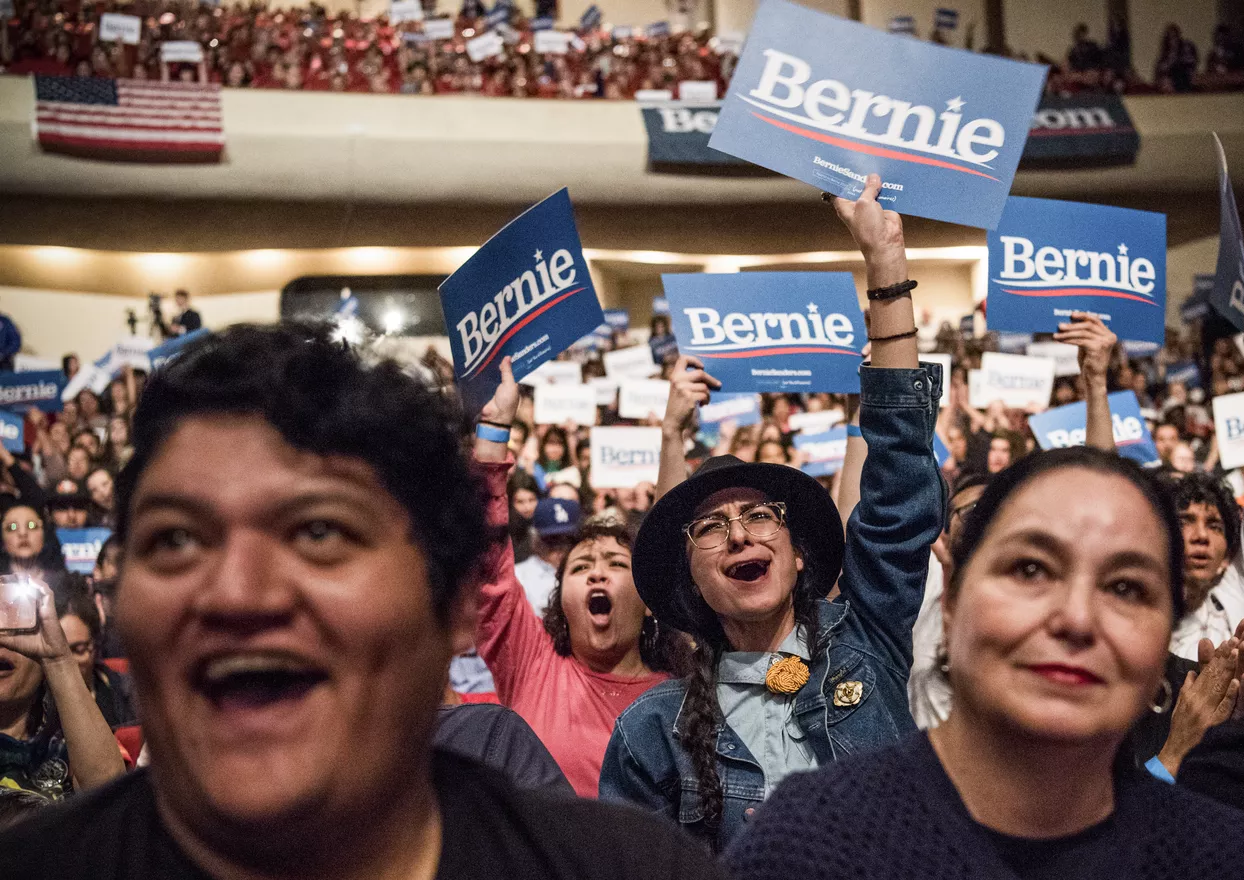 Sen. Bernie Sanders (I-VT) is projected to win Nevada’s Democratic caucus handily on Saturday night, giving his campaign another boost after his win in New Hampshire and strong showing in the unsettled Iowa caucuses.

With about 50 percent of the vote in, Sanders emerged as the victor at 46.6 percent, while Former Vice President Joe Biden is projected to come in second at 19.2 percent.

The next contest is the South Carolina primary on February 29th, and there is another debate sometime in the coming week. There are many twists and turns left in this race, but Bernie Sanders is the clear front runner, and if he emerges from Super Tuesday with a clear delegate lead, he will be the nominee as it is nearly impossible for the candidate in 2nd place to catch up, as Hillary found out in 2008 and as Bernie himself found out in 2016. We Democrats do proportional allocation and not winner take all when we distribute the delegates. So unless whomever is in second place beats Bernie in all remaining contests by 10 or more points, they ain’t catching up.

So, if you are like me, and you are not a Bernie fan, you need to reconcile yourself to that fact and get over your dislike of him. Because, as we have all said, vote blue no matter who. Plus, as I have highlighted below in posting an article from Matt Yglesias from Vox, Bernie as the nominee ain’t all bad. Indeed, in this Trump Era of politics, nobody knows anything. All old rules no longer apply. So maybe embracing socialism won’t destroy all Democrats. Remember, in 2016, Democrats thought the GOP had nominated their weakest possible candidate and they were wrong. Trump had tapped into something in the GOP that propelled him forward. The same may be true for Sanders.

Finally, I am going to quote Wajahat Ali, a NY Times Columnist and CNN Contributor: “Hardcore Bernie fans, you need Democratic voters to win the [general] election. Dems losing their minds and souls over Bernie, he might be the nominee and you must support him to beat Trump. Mocking and alienating each other helps Republicans. Please don’t be self destructive.”

So non-Bernie Dems, relax and stop freaking the fuck out. BernieStans, it’s time to dial it back on the attacks on non Bernie Dems, no matter if they are part of the dreaded Establishment or not.

“A federal judge on Friday dismissed a racketeering lawsuit brought by Rep. Devin Nunes (R-CA) against the political research firm that enlisted a former British spy to look into Donald Trump’s ties to Russia during the 2016 presidential campaign,” the AP reports.

“Nunes, the former chairman of the House Intelligence Committee and a vocal ally of Trump, had accused Fusion GPS in a lawsuit last year of harassing him and trying to impede his panel’s investigation into Russian election interference.”

“As Americans, we should be frightened — deeply afraid for the future of the nation. When good men and women can’t speak the truth, when facts are inconvenient, when integrity and character no longer matter, when presidential ego and self-preservation are more important than national security — then there is nothing left to stop the triumph of evil.”

“President Trump will raise money in South Carolina before his North Charleston rally next week — for himself, the Republican Party and the campaign of U.S. Sen. Lindsey Graham,” the Columbia State reports.

“The event will mark the first time that Trump has held a Palmetto State fundraiser designed in part to benefit Graham, who is expected to win reelection later this year but is still in a competitive race against a well-funded, establishment-backed Democratic challenger.”

“The Trump administration is bracing for a possible coronavirus outbreak in the United States that could sicken thousands — straining the government’s public health response and threatening an economic slowdown in the heat of President Trump’s reelection campaign,” Politico reports.

“That stark realization has taken hold in high-level White House meetings, during which some administration officials have voiced concerns the coronavirus is already spreading undetected within U.S. borders.”

“Nevada is a notoriously tough place for presidential candidates to attract volunteers. But Bernie Sanders has somehow amassed an army,” Politicoreports.

“Thousands of the Vermont senator’s volunteers in the state have knocked on 500,000 doors, two-thirds of which took place in February, according to his campaign. Those mega-fans helped propel his strong grassroots performances in Iowa and New Hampshire — and are now poised to help him turn out the vote and cinch a victory in Nevada.”

“Bernie Sanders is sharpening his focus on the Texas primary with early voting underway, planning four rallies in the state this weekend and naming more staff here,” the Texas Tribune reports.

“Sanders has scheduled rallies Saturday in El Paso and San Antonio and Sunday in Houston and Austin. The Saturday rallies come the same day that Nevada holds its caucus, in which Sanders is expected to do well.”

“The gesture amounts to an implicit challenge for those present. Their job is to find ways of justifying, enacting or explaining Mr. Trump’s policy, not to advise the president on what it should be.”

“That is the reverse of what the National Security Council was created to do at the Cold War’s dawn — to inform and advise the president on national security decisions. But under Mr. O’Brien, the White House’s hostage negotiator when Mr. Trump chose him to succeed John Bolton in September, that dynamic has often been turned on its head.”

National Security Adviser Robert O’Brien told CBS News he disputed reports of what was presented during a House Intelligence Committee that Russian are interfering to help President Trump in the presidential election.

Former Senate Majority Leader Harry Reid told MSNBC that the filibuster in the Senate will be gone soon.

Said Reid: “I’ve said and I believe this, with what the Republicans have done and my friend Mitch McConnell with the Senate, it’s not a question anymore if the filibuster is going to be gone, it’s when it’s going to be gone. You cannot have a democracy and take 60 votes on everything, and that’s not the end of the world. We have bicameral election, we have six year terms so having the House like the senate isn’t going to be all that bad.”

President Trump has told his staff that he will look to block the release of John Bolton’s upcoming book over claims that their discussions were classified, adding that his former national security adviser is a “traitor,” the Washington Post reports.

Trump has specifically insisted to aides that Bolton’s book, The Room Where It Happened, shouldn’t be published before the November election.