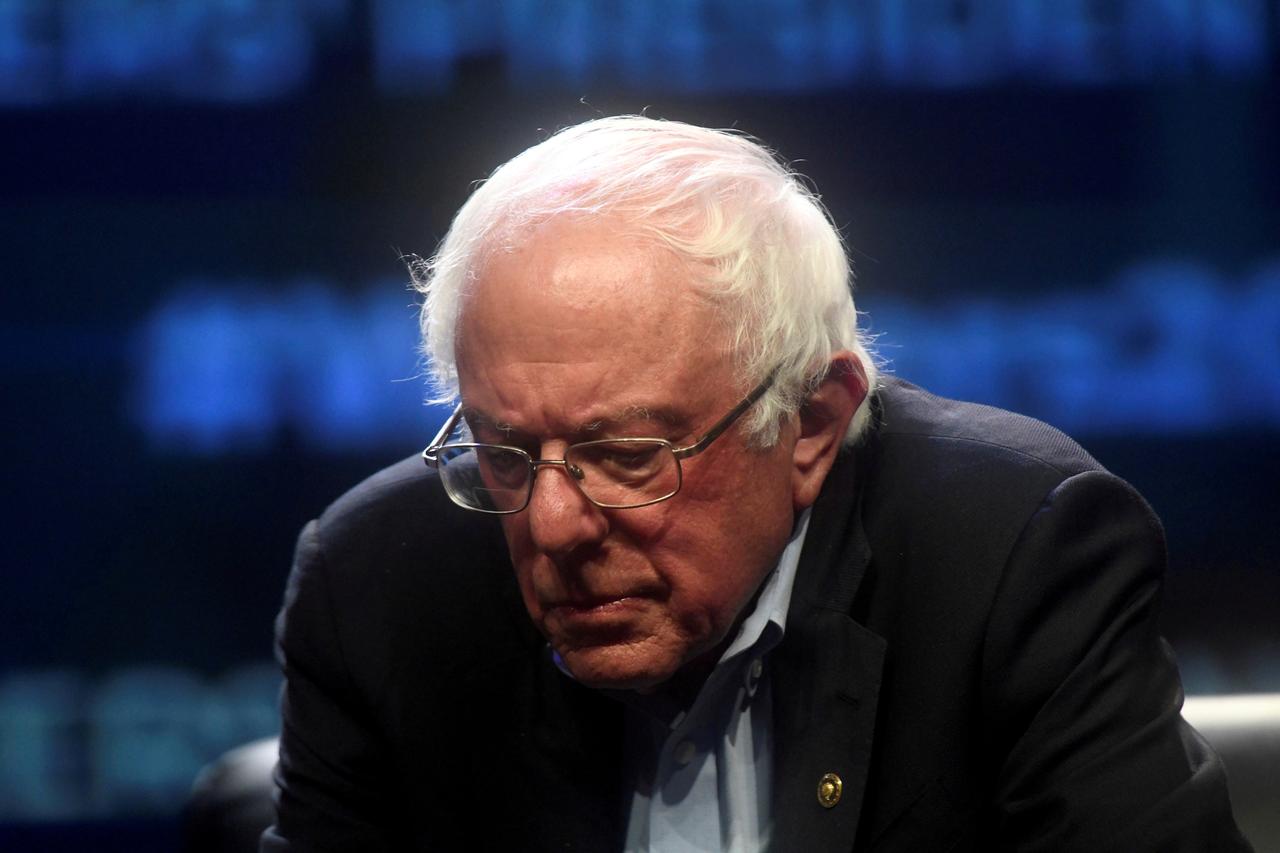 Sen. Bernie Sanders told CNN he will not release any more medical records during his presidential bid, arguing he’s already released sufficient information to quell concerns about his health.

This is disqualifying. Bernie, you have had a major heart attack recently and you will be 80 years old in the first year of your presidency. You will release every fucking medical record ever collected on you or you are no better than Trump.

“As in prior surveys, about 40% of Democrats say their top choice is one of the most ardent liberals, Mr. Sanders or Ms. Warren, with 45% to 50% picking a more centrist candidate. The difference now is that more candidates are dividing the party’s self-described centrist voters, while Mr. Sanders has expanded his lead over Ms. Warren among liberals.”

A new ABC News/Washington Post poll finds Bernie Sanders leading the Democratic race nationally with 32%, followed by Joe Biden at 17%, Mike Bloomberg at 14%, Elizabeth Warren at 11%, Pete Buttigieg at 7% and Amy Klobuchar at 6%.

A new Sooner Survey poll in Oklahoma — another Super Tuesday state — finds Michael Bloomberg leading the Democratic primary field with 20%, followed by Bernie Sanders at 14%, Joe Biden at 12%, Pete Buttigieg at 11%, Elizabeth Warren at 8% and Amy Klobuchar at 6%.

Another 7% of voters said they would support other candidates, 9% said they are undecided and 14% said they probably won’t vote.

A new Public Policy Institute of California poll in California found Bernie Sanders leading the Democratic field with 32%, followed by Joe Biden at 14%, Elizabeth Warren at 13%, Mike Bloomberg at 12% and Pete Buttigieg at 12%.

Key findings: “The findings were particularly grim for Biden and Warren; each dropped by 10 percentage points from their standings in the institute’s poll in January. Sanders has been especially successful at consolidating support among Latinos and voters under 45 years old.”

A new SurveyUSA poll in California finds Sanders leading with 25%, followed more closely by Bloomberg at 21%, Biden at 15%, Buttigieg at 12% and Warren at 9%.

Michael Bloomberg is framing the Democratic presidential race as if it’s between just him and Bernie Sanders. However, the new Wall Street Journal/NBC News poll shows Sanders would trounce Bloomberg in a head-to-head match up, 57% to 37%.

“And yet, Bloomberg’s campaign published a new video on Tuesday that pledged the former New York City mayor believed in ‘inclusivity’ for ‘LGBTQ plus youth,’ featuring fashion designer Isaac Mizrahi declaring, ‘Mike is so incredibly sensitive to this issue.’”

Then release it Mr. Sheeky, right now. So we Democrats can actually chose a real Democrat as our nominee rather than the Soviet independent Sanders or the conservative independent Bloomberg.

When Michael Bloomberg steps onto the Democratic debate stage for the first time on Wednesday, he will be ready to dismiss rivals like Joe Biden, who as vice president made “speeches that somebody writes for him,” and Pete Buttigieg, “mayor of a town,” Reuters reports.

Said Bloomberg: “None of them would know how to run a big organization.”

First Read looks at what having Mike Bloomberg at the debate this week will mean:

Wall Street Journal: “The billionaire hasn’t held a public event since Saturday evening and has been preparing for the debate in recent days, according to people familiar with his planning.”

“Members of President Trump’s re-election team and some of the GOP’s biggest fundraisers are discussing a new goal of raising an extra $1 billion to compete with Michael Bloomberg’s record campaign spending, according to two bundlers who have been part of the discussions,” Bloomberg reports.

“Bloomberg’s pledge to spend up to $1 billion to defeat Trump regardless of whether he wins the nomination is spurring Republicans to consider ways to keep up, including getting conservative billionaires to make much larger donations to Trump-related super-PACs.”

“Bloomberg’s campaign said the Democratic presidential race is down to a two-man contest — and Joe Biden isn’t one of the men in the mix,” Politico  reports. “The former vice president’s fortunes have plummeted so much since his back-to-back losses in Iowa and New Hampshire that only Bloomberg is polling strongly enough to challenge the Democrats’ front-runner, Vermont Sen. Bernie Sanders.”

“Bernie Sanders’ presidential campaign plans to ask for a partial recount of the Iowa caucus results,after the state Democratic Party released results of its recanvass late Tuesday that show Sanders and Pete Buttigieg in an effective tie,” the AP reports.

Politico: “Buttigieg now leads Sanders by .08 state delegate equivalents, according to results posted by the state party — 26.186 percent for Buttigieg to 26.182 percent for Sanders. The initial results were marred by apparent reporting or mathematical errors.”

Jesus, Bernie, it was a tie. You both get basically the same amount of delegates. Give it up.

“The super PAC, called Kitchen Table Conversations, was formed late last week at a crucial moment in the race for Klobuchar, who has only days to build on her surprise third-place finish in New Hampshire before a slew of big-ticket Democratic presidential contests begin.”

A campaign-finance watchdog group has filed a complaint alleging the presidential campaign of Pete Buttigieg improperly coordinated with VoteVets, a super PAC supporting the campaign of the former mayor of South Bend, the Washington Post reports.

“Mike Bloomberg would sell the financial data and media company he created in the 1980s — which bears his name and made him a multibillionaire — if he is elected U.S. president,” the AP reports.

A new Pew Research study finds bogus respondents make up between 4% and 7% of participants in opt-in online surveys in the United States.

Washington Post: “If bogus respondents are not detected and removed, Pew found, polls using opt-in online samples may overestimate approval of Trump and other political figures and policies by about two percentage points. That fairly small impact can be meaningful for presidents like Trump facing a close reelection bid, and are amplified for certain subgroups, including Hispanics.”

“Sen. Bernie Sanders has for years cast his opposition to the Iraq War as near-absolute, insisting he knew the Bush administration was lying from the start about the threat to the U.S. posed by Saddam Hussein and his regime’s alleged production of weapons of mass destruction,” NBC Newsreports.

“But a review of the congressional record and statements before the House vote in October 2002 to authorize the U.S. to use military force show that his position wasn’t as absolute as he claims.”

Elizabeth Warren criticized Bernie Sanders after his supporters allegedly released personal information about the leadership of an influential Nevada union, telling NBC News that Bernie “has a lot of questions to answer” about the incident.

Said Warren: “I’ve said before that we are all responsible for what our supporters do, and I think Bernie has a lot of questions to answer here.”

She added: “I am particularly worried about what happened in the attacks on members of the culinary union, particularly on the women in leadership. That is not how we build an inclusive Democratic Party… We do not build on a foundation of hate.”

“Mike Bloomberg on Tuesday rolled an ambitious plan to rein in Wall Street, echoing platforms of some of his more liberal Democratic rivals,” CNBC reports.

“Bloomberg’s plan would bolster many of the reforms either put in place or strengthened as part of the 2010 Dodd-Frank Act in response to the Great Recession, a crisis that some blamed on Wall Street banks.”

New York Times: “Perhaps the most surprising proposal, given the billionaire’s close personal ties to Wall Street movers and shakers, is a plan for the Justice Department to create a dedicated team to fight corporate crime by ‘encouraging prosecutors to pursue individuals, not only corporations, for infractions.’”