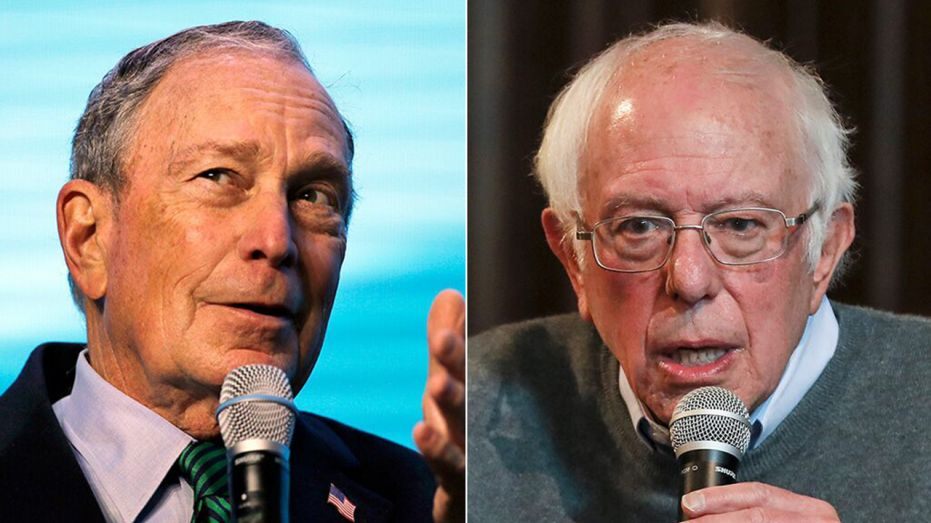 A new Monmouth poll in Virginia, which votes on Super Tuesday March 3, finds Michael Bloomberg and Bernie Sanders tied at 22% each, followed by Joe Biden at 18%, Pete Buttigieg at 11%, Amy Klobuchar at 9% and Elizabeth Warren at 5%. Another 11% of likely primary voters remain undecided and do not lean toward any candidate at this time.

A new NPR/PBS/Marist poll finds Bernie Sanders leading the Democratic presidential field nationally with 31%, followed by Mike Bloomberg at 19%, Joe Biden at 15%, Elizabeth Warren at 12%, Amy Klobuchar at 9%, and Pete Buttigieg at 8%

A new Data for Progress poll in Nevada finds Bernie Sanders leading with 35%, followed by Elizabeth Warren at 16%, Pete Buttigieg at 15%, Joe Biden at 14% and Amy Klobuchar at 9%. Jon Ralston: “My one caveat is that polls are only as good as their turnout model, and this turnout is very much in flux.”

A new Point Blank Political poll in Nevada shows Tom Steyer leading Democrats with 19%, followed by Amy Klobuchar at 16%, Joe Biden at 14%, Bernie Sanders at 13%, Pete Buttigieg at 13% and Elizabeth Warren at 7%. Huge caveat: The poll has a sample size of just 225. Yeah, this is probably an outlier.

Michael Bloomberg is airing another national television ad tying himself to closely Barack Obama. And I heard a radio spot on 94WIP this morning during the highly rated Cataldi show.

Los Angeles Times: “Michael Bloomberg has spent more than $124 million on advertising in the 14 Super Tuesday states, well over 10 times what his top rivals have put into the contests that yield the biggest trove of delegates in a single day. The only other candidate to advertise across most of those states so far is Vermont Sen. Bernie Sanders, who has spent just under $10 million on ads for the March 3 primaries.”

“$60 billion can buy you a lot of advertising, but it can’t erase your record.” — Joe Biden, on Meet the Press, challenging Democratic primary rival Michael Bloomberg. Well, we’ll see.

Given the NPR poll above, Bloomberg has now qualified for the debate tomorrow.

“Bloomberg is trying to hone a crisp and energetic appeal to voters that will contrast with Biden — another white, male septuagenarian on stage, according to advisers.”

New York Times: “For the past two months, Mr. Bloomberg’s presidential campaign has been lining up endorsements, adjusting its messages to voters and expanding its reach across the country with an eye toward the moment it knew would come: when Mr. Bloomberg, the 78-year-old multibillionaire and former mayor of New York, would no longer be an afterthought in the race but a prime target, and decades worth of impolitic and insensitive remarks — as well as problematic policy stances — would face renewed scrutiny.”

“That moment is now here, presenting Mr. Bloomberg with the kind of political crucible he has not faced since 2009, when he last ran for public office. Over the weekend, the concern about Mr. Bloomberg’s ascendancy was evident as rival Democrats campaigning in Nevada unleashed a barrage of attacks on the former mayor, including familiar laments that he was trying to buy an election and new criticism aided by resurfaced videos that invoked his past controversies.”

Wall Street Journal: “Trav Robertson, the state Democratic Party chairman, has been working in South Carolina politics for 20 years and said the race is the most fluid he has seen.”

Said Robertson: “This race is wide open here. Joe Biden has some work to do in order to close the deal and win South Carolina.”

“Michael Bloomberg’s presidential campaign, which has largely focused its attacks on President Trump, mounted a frontal offensive against one of his Democratic rivals for the first time, comparing Sen. Bernie Sanders’s campaign tactics with those employed by the president,” the New York Times reports.

“Mr. Sanders struck back at a campaign rally later in the afternoon, drawing comparisons between Mr. Bloomberg and Mr. Trump. But Mr. Bloomberg was not alone in targeting the Vermont liberal: Former Vice President Joseph R. Biden Jr., in a television interview, called on Mr. Sanders to disavow attacks by some of his supporters on officials at a Nevada labor union, behavior that Mr. Biden said was ‘Trump-like.’”

Pete Buttigieg says if President Trump refuses to leave the White House after losing his reelection bid in November, he could stay and “do chores,” The Hill reports. Said Buttigieg: “I mean if he won’t leave, I guess if he’s willing to do chores, I guess we could work something out.”

“Joe Biden, Pete Buttigieg, Amy Klobuchar and Elizabeth Warren all must weigh the costs of punching Bloomberg where he looks most vulnerable: stop-and-frisk, charges of sexism, billionaire entitlement. The more zealous the attacks, the greater the risk he turns his campaign ATM against them,” Axios reports. “They’re already struggling to catch up with Sanders in national support and campaign dollars. Turning their focus toward Bloomberg only complicates that task.”

“There’s another risk, at least for the moderates: Weakening the one who may be best poised to stop Sanders, a democratic socialist, if they fail themselves.”

First Read: “So moderate Democrats across the country: You’ll need to choose your fighter by Super Tuesday. Who’s it going to be?”

Politico: “Advisers to three rival campaigns privately conceded over the weekend that the best anyone else could hope for here is second or third. Some of them gape at the crowd sizes at Sanders’ events — like the swarm of supporters who accompanied Sanders, his fist raised, to an early caucus site in Las Vegas on Saturday, the first day of early voting in the state.”

“While few expect that Sanders can carry more than a third of the vote in Nevada, nearly everyone believes that will be enough to win in a field where the moderate vote remains splintered. It is becoming a source of celebration for Sanders’ supporters and an urgent problem for those who want to prevent him from claiming the nomination.”

Associated Press:  One thing that unites the establishment: Fear of Sanders.

BALDWIN: If Senator Sanders ends up being the nominee — and we know Mike Bloomberg has pledged to donate as much as one billion dollars in an effort to defeat President Trump — would you accept his money?

This doesn’t matter. Bloomberg would still support a Sanders presidential campaign via his own super PAC.

Stacey Abrams (D), who has boldly predicted that she’ll be president within the next two decades, told The View that “of course” she would be honored to be the vice presidential pick of whoever secures the 2020 nomination.

“The campaign, Mr. Schultz made clear on the call, was banking on finishing in at least second place in the upcoming Nevada caucuses, a contest that will offer the first major test of Mr. Biden’s assertion that he can uniquely assemble a diverse coalition.”

“Left unsaid: Nevada will also show whether Mr. Biden, the former vice president, can revive his campaign after his first two finishes sent his national poll numbers plummeting, put his donors on edge and jeopardized his standing even in his perceived firewall state, South Carolina.”

“President Trump doesn’t have much of a primary fight on his hands — but Republican voters are nevertheless turning out in droves for him, a warning sign for Democrats in November,” Politico reports.

“The massive turnout is a reflection of organic enthusiasm among conservatives and a sophisticated effort by Trump’s campaign to rev up its get-out-the-vote machine ahead of the general election. Trump and Vice President Mike Pence traveled to Iowa and New Hampshire ahead of voting, and the campaign flooded the two states with high-profile surrogates and launched a Facebook advertising blitz reminding supporters to cast ballots.”

Sen. Amy Klobuchar said her presidential campaign has raised more than $12 million since the debate in New Hampshire just over a week ago, The Hill reports.

“Anxiety is rising over the possibility of another tech-induced meltdown at the Nevada Democratic caucuses on Saturday,” Politico reports.

“In interviews, three caucus volunteers described serious concerns about rushed preparations for the Feb. 22 election, including insufficient training for a newly-adopted electronic vote-tally system and confusing instructions on how to administer the caucuses. There are also unanswered questions about the security of Internet connections at some 2,000 precinct sites that will transmit results to a central ‘war room’ set up by the Nevada Democratic Party.”

The FiveThirtyEight forecast shows that a contested convention is very possible. Now, a contested convention only means that there will be no candidate with a majority of pledged delegates. Yet, even in that situation, I believe, to avoid all conflict and the destruction of the party, we will have to give the nomination to whomever has the plurality of pledged delegates.

Topless protesters stormed the stage at a Nevada rally for Sen. Bernie Sanders and later found themselves in police custody, the Washington Examiner reports.

“The two women poured milk on themselves and walked around shouting until security escorted them offstage, according to footage of the incident, which circulated online. The crowd continued to make raucous noise while attendees waited for the protesters to get off the stage.”

Sanders joked about the incident later: “This is Nevada, there’s always a little excitement at no extra cost.”