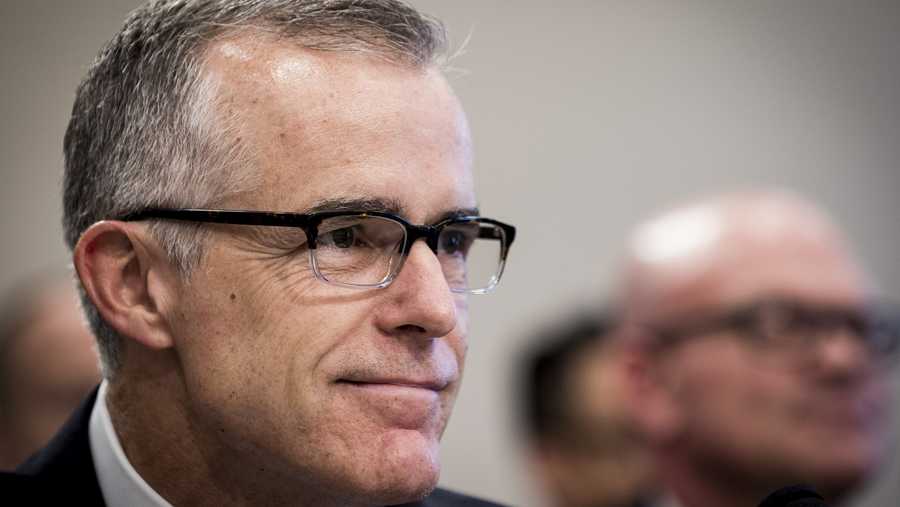 “The Justice Department plans to reveal soon that it will not bring charges against former acting FBI director Andrew McCabe for lying to investigators about a media disclosure, ending a long-running inquiry into a top law enforcement official who authorized the bureau to investigate President Trump and soon became the commander in chief’s political punching bag,” the Washington Post reports.

“The department could make the decision public in the coming days, the people said, though the exact mechanism for their doing so remains unclear. The move will surely infuriate Trump, who has raged publicly and privately in recent months that McCabe and others he considers political enemies should be charged with crimes.”

When the Justice Department decided not to charge former FBI Director James Comey with criminal charges “that sent Trump into a rage,” the Washington Post reports.

“He complained so loudly and swore so frequently in the Oval Office that some of his aides discussed it for days… Trump repeatedly said that Comey deserved to be charged.”

Said Trump: “Can you fucking believe they didn’t charge him?”

“Trump has also wanted charges filed against Comey’s former deputy, Andrew McCabe. A separate inspector general investigation concluded that McCabe lied to investigators about his role in authorizing disclosures for a Wall Street Journal story in October 2016 about internal FBI tensions over an investigation of the Clinton Foundation. A grand jury in Washington seemed poised to make a decision on the case last year before fizzling into inaction.”

“As the Senate impeachment trial of President Trump drew to a close in Washington earlier this month, federal prosecutors in New York contacted witnesses and sought to collect additional documents in an investigation related to Trump’s personal attorney Rudolph W. Giuliani,” the Washington Post reports.

“The recent steps — including an interview with a witness last week — indicate that the probe involving Giuliani and two of his former associates is moving forward, even as the Justice Department has set up a process to evaluate claims Giuliani is making about alleged wrongdoing in Ukraine related to former vice president Joe Biden.”

“Defense attorneys for Roger Stone demanded a new trial Friday, one day after President Trump suggested that the forewoman in his longtime political confidant’s case had ‘significant bias,’” the Washington Post reports. This is not the first time Stone’s attorneys have asked for a new trial, and the Judge in the case has already denied that request and will likely deny this one as well.

“The review is highly unusual and could trigger more accusations of political interference by top Justice Department officials into the work of career prosecutors.”

Asha Rangappa: “This is simply insane. Barr is basically trying to systematically ‘undo’ the entire Mueller investigation. And it’s so Trump can have reelection fodder.”

Daily Beast: “Late last year, the U.S. government signaled that it was about to level a new round of sanctions targeting people and entities linked to Deripaska… Back in April 2018, the U.S. sanctioned the oligarch, who once lent millions of dollars to convicted Trump campaign chief Paul Manafort as part of a decades-long relationship between the two men. Over the following months, Deripaska’s allies made a deal with Treasury to limit Deripaska’s control over the companies in exchange for sanctions relief. Then Treasury lifted the sanctions on the companies—though the sanctions on the oligarch himself are still in place. In the year since then, it’s been all quiet on the Deripaska sanctions front.”

“Until December, that is. What’s strange is that despite the signal, Treasury didn’t follow through and the sanctions—which would have targeted the unnamed people and entities because of their proximity to Deripaska—didn’t materialize. It’s been two months since the U.S. indicated that the new sanctions were about to come out, and there’s been no movement from Treasury on the oligarch. The two months of inaction has stirred suspicions of political interference in the sanctions process.”

“If you’re asking me a hypothetical about whether this Republican Senate would confirm a member of the Supreme Court due to a vacancy created this year — yeah, we would fill it.” — Senate Majority Leader Mitch McConnell (R-KY), on Fox News.

Said Trump: “This doesn’t mean that I do not have, as President, the legal right to do so, I do, but I have so far chosen not to!”

Trump’s tweet followed a remarkable interview with ABC News, in which Barr said, “I think it’s time to stop the tweeting about Department of Justice criminal cases,” adding that such statements “about the department, about people in the department, our men and women here, about cases pending here, and about judges before whom we have cases, make it impossible for me to do my job and to assure the courts and the prosecutors and the department that we’re doing our work with integrity.”

“President Trump’s pick for the Federal Reserve Board, Judy Shelton, came under fire from Republican lawmakers on Thursday, signaling trouble ahead for her nomination,” Bloomberg reports.

“Speaking to reporters after a Senate Banking Committee hearing on her appointment, Senators Richard Shelby from Alabama, Patrick Toomey from Pennsylvania and John Kennedy from Louisiana all said they had not decided if they would vote for her confirmation.”

“Emboldened after his impeachment acquittal, President Trump now openly admits to sending his attorney Rudy Giuliani to Ukraine to find damaging information about his political opponents, even though he strongly denied it during the impeachment inquiry,” CNN reports.

“The reversal came Thursday in a podcast interview Trump did with journalist Geraldo Rivera.”

New York Times: ““The attorney general had been contemplating how to respond since he became aware of Mr. Trump’s attacks on the department… Speaking up could have put Mr. Barr at risk of losing the backing of the president, but remaining silent would have permitted Mr. Trump to continue attacking law enforcement and all but invited open revolt among the some 115,000 employees of the Justice Department. Ultimately, Mr. Barr concluded that he had to speak out to preserve his ability to do his job effectively.”

Politico: “The benign response from the White House prompted speculation from some quarters that Barr‘s message was aimed more at calming the furor at the Justice Department over the episode than actually scolding Trump.”

“The House voted to eliminate the deadline to add an amendment to the Constitution to establish equality between the sexes, though the court battle over the validity of the time limit Congress once set for ratification is set to wage on,” the Wall Street Journal reports.

“The resolution isn’t likely to be taken up in the GOP-led Senate, where it has limited Republican support.”