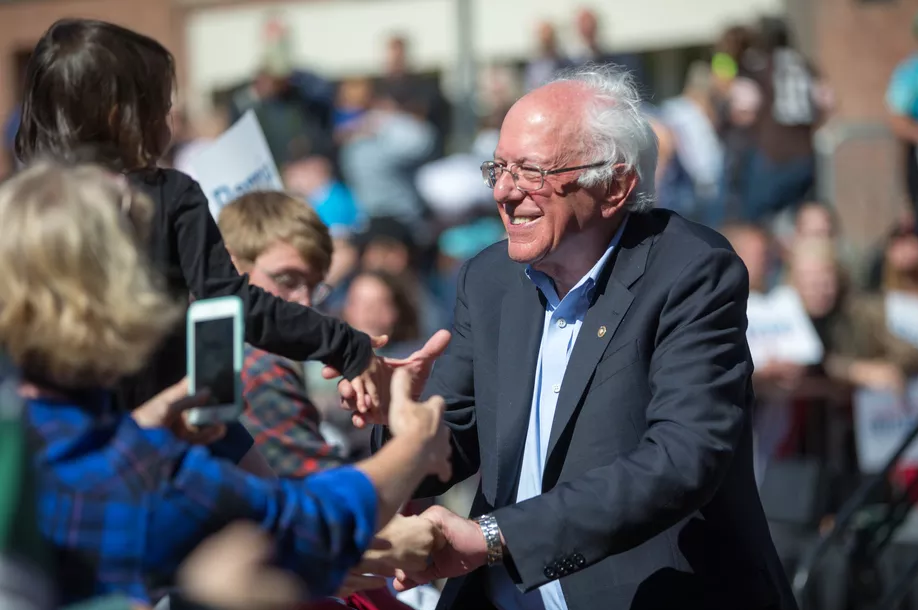 A new Morning Consult poll finds Bernie Sanders leading the Democratic presidential race nationally with 29%, followed by Joe Biden at 19%, Mike Bloomberg at 18%, Pete Buttigieg at 11%, Elizabeth Warren at 10% and Amy Klobuchar at 5%.

A new Landmark Communications poll in Georgia finds Biden leads with 31%, followed by Sanders at 14% and Bloomberg with 14%. All other candidates have less than 5%.

A new University of Texas/Texas Tribune Poll in Texas finds Sanders leading the Democratic presidential field with 24%, followed by Biden at 22%, Warren at 15%, Bloomberg at 10%, Buttigieg at 7% and Klobuchar at 3%.

A new Yahoo News/YouGov poll shows that Sen. Bernie Sanders would defeat each of the other Democratic presidential candidates in a one-on-one race — in many instances by double-digit margins.

The Democratic National Committee will host another presidential primary debate on March 15 in Phoenix, just two days before the Arizona primary, Politico reports. The debate will be the 11th of the party’s nominating process.

“Democratic presidential candidates hoping to revive their flagging campaigns increasingly took aim at Mike Bloomberg on Thursday, blasting their billionaire rival for trying to buy his way into the White House and raising questions about his commitment to racial equality,” the AP reports.

“The sniping reflects the remarkably fluid state of the Democratic race even after two states that typically winnow presidential fields have already voted. The White House hopefuls are trying to blunt Bloomberg, who gained attention by flooding the national airwaves with hundreds of millions of dollars in advertisements and is on the verge of being admitted into next week’s presidential debate. And the lagging candidates are trying to prove that they still have the mettle to stay in the race, even if their path is becoming increasingly difficult.”

A new WPA Intelligence poll in Alabama of likely Republican primary voters found Jeff Sessions leading the U.S. Senate race with 34%, followed by Tommy Tuberville at 29%, Bradley Byrne at 17% and Roy Moore at 6%.

Nevada’s powerful Culinary Workers Union will not endorse in the presidential primary, while criticizing Bernie Sanders’ signature Medicare for All proposal, Politico reports.

Said Jeffries: “We fought Mayor Michael Bloomberg and Police Commissioner Ray Kelly to dismantle the unconstitutional and out-of-control stop-and-frisk program as implemented in New York City. It was outrageous, it was harmful, and it was destructive in the manner in which communities of color were treated.”

He added: “That said, I do believe that Mayor Bloomberg’s apology was heartfelt and authentic, in part because Mike Bloomberg prides himself on evaluating the data. In fact, when he was mayor of New York, he would often say, ‘Trust in God. All others bring data.’ That’s what he’s all about. Any evaluation of the data after stop-and-frisk was dismantled suggests that crime didn’t go up; it went down significantly. The data makes clear that stop-and-frisk, as aggressively practiced during the Bloomberg years, had nothing to do with the decline in crime because crime went down dramatically once stop-and-frisk was declared unconstitutional. As a result, I believe that Michael Bloomberg, looking at the data, could authentically conclude that he was wrong and therefore should apologize.”

Politico: “Inside Bloomberg’s sprawling Manhattan headquarters, his team sprung to action: Emails started flying before sunrise about how to respond. Strategies about how to handle President Trump’s tweet calling him a “total racist” were debated. And staffers gathered for a morning meeting worried about how to manage black surrogates and supporters whose endorsements were to be rolled out that week.”

“Leaders for Bloomberg’s black and Latino constituency teams gathered on a call with staffers spread across the country to get ahead of the news and calm their nerves. They talked about Bloomberg’s evolution from high-profile defender to deeply apologetic critic of ‘stop and frisk’… Advisers to the former New York City mayor distributed talking points that catalogued his work on economic opportunity and racial justice.”

“Meanwhile, in a conference room at his Times Square headquarters, the mayor assembled about 20 black pastors for a pre-scheduled meeting that lasted more than two hours and included face time with Bloomberg.”

I agree with everything in this piece. I dislike Bernie immensely, but if he is the pledged delegate leader, no matter if he doesn’t have a majority, we can’t take the nomination away from him. You do a first ballot and record all the vote as it stands going into the convention, and then on the second ballot you confirm the pledged delegate leader by acclamation. No contested convention.

And then its do or die in the general election for the progressive movement. Either we win with Bernie or the movement dies in his defeat.

“With the Nevada Democratic caucuses only a week away, both caucus workers and presidential campaigns are worried about the lack of detail the state party is providing about how the results reporting process will work,” CNN reports.

The party scrapped plans to use the app that imploded in Iowa in favor of a new “user friendly” calculator, “but caucus volunteers have yet to get their hands on the calculator even though they’re the ones expected to use it on caucus day, and they have been given few details about it.”

End caucuses forever and put to death anyone who defends their use.

“Allies of President Trump have sharply focused attention on the sexual identity of presidential contender Pete Buttigieg in recent days, questioning in stark terms whether Americans are ready for a gay candidate who kisses his husband onstage,” the Washington Post reports.

“The attacks are prompting blunt responses from Buttigieg’s allies and even his Democratic rivals, who call the remarks inappropriate and offensive. The exchanges were ignited by radio host Rush Limbaugh, who received the Presidential Medal of Freedom from Trump last week and who framed his comments as an ostensible analysis of how Democrats feel.”

Said Patricof: “It’s critical that Biden wins South Carolina and he’s got to produce in Nevada. He’s said it. Donors feel it. Everybody is sticking with Joe until they see what happens there.”

A Joe Biden campaign official tells CNN the campaign will redeploy nearly 50 additional staffers to Nevada and South Carolina by this weekend, with some of those staffers being sent from their operations in Super Tuesday states.

The redeployment will bring the total number of staff on the ground in Nevada to more than 130 and more than 60 in South Carolina.

The Washington Post has a nice Democratic nomination simulator which allows you to make various assumptions about the candidates.

“You should also notice that, in most scenarios, it takes a while for a candidate to get a delegate majority and, therefore, the nomination. In some scenarios, no one may, meaning that the party gets to its convention without a clear nominee — the dreaded ‘contested convention’ scenario.”

“What may be more subtle is how hard it is to overtake a front-runner. Once someone jumps out into the lead, it’s tough to catch them, since unless the challenger earns 85 percent of the vote in a contest, the front-runner gets delegates too.”

The latest FiveThirtyEight forecast shows the odds of Bernie Sanders winning the Democratic nomination (37%) are now the same as no candidate winning a majority of delegates (37%.)

A new report by the Kaiser Family Foundation and the Cook Political Report finds that 41% of voters in the “blue wall” states — Pennsylvania, Michigan and Wisconsin — have not decided who they will support for president in 2020.

The report also found that President Trump is an key factor in motivating voters to turn out. Twenty-one percent of voters said that their primary motivation to vote in 2020 is to defeat Trump, compared to the 8% who said they were motivated by a desire to reelect Trump or to oppose a Democrat.

Key takeaway: Trump’s disapproval in these states is 59%.

Sen. Elizabeth Warren said that she has raised over $6 million dollars since the Iowa caucuses, the AP reports. Said Warren: “Right now, it’s wide open. There’s a lot of froth. It’s going to be a long process.”

“It was really touching. I got phone calls, text messages from people who I’ve become friends with over the last number of months, including Cory, Kamala, Beto and people that have reached out on a personal level. They’re not trying to get anything out of it. It’s just sort of sharing your human experience.”

— Andrew Yang, quoted by the New York Times, on ending his presidential campaign.