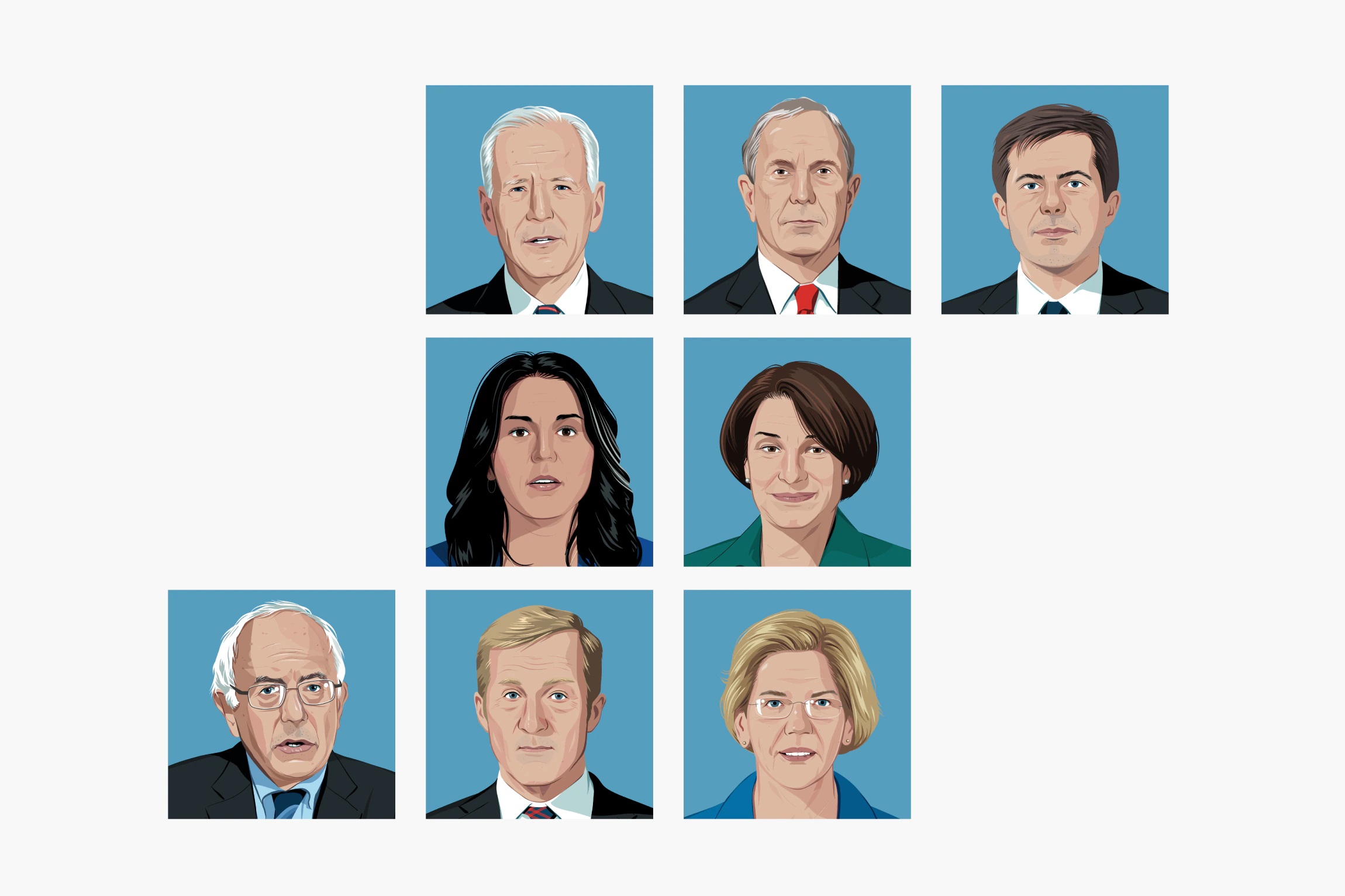 Washington Post: “On the face of it, Sanders managed to consolidate progressives and nabbed the most votes in both New Hampshire and Iowa. His win here was fueled by young voters and liberals, but there were early warning signs for the leftist firebrand: Sanders did not make gains in his backyard compared to 2016 and failed to flood the zone with the young people he needs to pull off the ‘political revolution’ he promises.”

“Youth turnout in the state declined from 2016 to 2020 from 19 to 14 percent. And the candidate seen as most likely to beat President Trump was not Sanders but his 38-year-old rival — former South Bend, Ind., mayor Pete Buttigieg, according to exit polls.”

Ryan Lizza: “Sanders overpromised and underdelivered. He has premised his campaign on nothing less than sparking a political revolution in which disaffected and first-time voters — especially young ones — pour into American politics to carry him to the White House. It didn’t happen in Iowa, and it didn’t happen in New Hampshire.”

“Sanders dominated the state in 2016, winning every county. Buttigieg and Klobuchar ripped holes through that map everywhere, turning color-coded maps from 2016 that showed a Sanders rout into a patchwork of colors.”

Ron Bownstein: “These results raise pointed questions about whether Sanders can truly build a coalition broad enough to pull away from his rivals. Given the modest size of Sanders’s New Hampshire victory, Greenberg said, ‘I don’t see it producing a surge in the states following it.’” “Of course, no one else in the race has given any indication they can assemble a broader coalition of voters than Sanders has done. The limits constraining all of the top-tier contenders—and the prospect of Bloomberg further splintering the electorate with his unprecedented spending—is why more Democrats are beginning to contemplate what seemed unimaginable not long ago: that for the first time since 1952 they will arrive at their party convention in Milwaukee this July without anyone laying claim to a majority of delegates.”

“Shellshocked by two big losses, Joe Biden’s presidential campaign tried to reassure donors, surrogates and the press about his path forward Wednesday while counterattacking nearly every one of his rivals,” Politico reports. “The attack-everyone strategy is a marked shift for a once-highflying Biden, who has tumbled from frontrunner to being in danger of becoming an also-ran.”

“At the height of the 2008 economic collapse, then-New York Mayor Michael Bloomberg said the elimination of a discriminatory housing practice known as ‘redlining’ was responsible for instigating the meltdown,” the AP reports.

Said Bloomberg: “It all started back when there was a lot of pressure on banks to make loans to everyone. Redlining, if you remember, was the term where banks took whole neighborhoods and said, ‘People in these neighborhoods are poor, they’re not going to be able to pay off their mortgages, tell your salesmen don’t go into those areas.’”

He continued: “And then Congress got involved — local elected officials, as well — and said, ‘Oh that’s not fair, these people should be able to get credit.’ And once you started pushing in that direction, banks started making more and more loans where the credit of the person buying the house wasn’t as good as you would like.”

Washington Post: “Typically, after the first two nominating contests, primaries narrow to a handful of front-runners as a campaign crystallizes between competing factions. This year, the race looks like no other Democratic primary in modern history, an increasingly muddled mix of ideologies, backgrounds and theories on what has unfolded.”

“Three contenders emerged from Tuesday’s vote here with added strength, with the top vote-getter a self-described democratic socialist and independent and the other two, both Democrats, vying to represent moderates. Two more candidates, including the party’s longtime national polling leader, leave the Granite State significantly weakened but vowing to fight on. And yet two more are self­-financing billionaires — one rising in South Carolina, which votes later this month, and the other gaining ground nationally and across Super Tuesday states.”

Associated Press: “While Mike Bloomberg’s rivals battled it out in majority-white Iowa and New Hampshire, the billionaire presidential candidate aggressively courted the black voters critical to any Democrat’s chance of winning of the nomination. The effort, backed by millions of dollars in ads, has taken him across Southern states that vote on March 3, from Montgomery, Alabama, and this week Raleigh, North Carolina, and Chattanooga, Tennessee, states where African American voters can decide a Democratic primary.”

“His pitch is one of electability and competence — hoping to capitalize on black Democrats’ hunger to oust President Donald Trump. But as he courts black voters he’ll also have to reconcile his own record as mayor of New York and past remarks on criminal justice.”

“Troy Price resigned his position as chairman of the Iowa Democratic Party Wednesday as the organization grapples with the fallout of a botched caucus process that has left the party and the state reeling,” the Des Moines Register reports.

Kyle Kondik: “Impossible not to think about how some Republicans dealt with Trump four years ago.”

“He has a plan, that’s for sure. You have to recognize, the man — he really was a good mayor of a huge, huge, city, the largest city in America. I like him, I’ve always liked him. Nobody’s done more on guns and climate than he has. No one.” — Former Sen. Harry Reid (D-NV), talking to Vice about Michael Bloomberg.

“Mike Bloomberg is spending so much money on Facebook ads that he has surpassed President Trump, the reigning king of the social media realm,” NBC News reports.

“Bloomberg spent more than $1 million a day on average over the past two weeks on Facebook. That’s five times more than Trump spent during the same period — and more than three times what Trump spent per day during his victorious fall 2016 campaign.”

“The turnout in Tuesday night’s Democratic New Hampshire primary was the party’s highest ever and provided a hopeful sign to Democrats disappointed by low enthusiasm demonstrated in Iowa last week,” CNN reports.

Former Sen. Harry Reid (D-NV) told Vice the Iowa caucuses should no longer be first in the presidential nomination process. Said Reid: “Iowa has forfeited its chance to be number one. I don’t think that’ll happen anymore.”

He added: “Since the debacle in Iowa, many have been talking about Nevada should be the first state. Why? Because we’re a state that’s heavily diverse. It’s really a state that represents what the country is all about. So I think that Iowa really was an embarrassment to everybody.”

Washington Post: “Rival campaigns have also begun to raise concerns about whether Bloomberg’s strength could help speed Sanders’s path to the nomination by further splitting the moderate vote in the party. Under Democratic rules, candidates can only accrue delegates if they clear 15 percent support thresholds, which are measured on both statewide and congressional district levels.”

“Bloomberg’s aides, who privately share the same concern about the moderate vote splitting in a way that helps Sanders, said the burden is on other candidates ‘to get out’ if they have failed to perform in the early contests.”

“Behind the scenes, Bloomberg, who is worth more than $50 billion, has stepped up his debate preparations, which began last year, as he faces what is likely to be the next major test of his campaign.”

Dan Balz: “All of this could be good news for Mike Bloomberg, the former New York mayor, who has chosen to skip the first four contests and begin his campaign in the states that vote March 3.”

“But it is good news for Bloomberg only if he can quickly make himself the principal alternative to Sanders. With Buttigieg and now possibly Klobuchar in the mix, that won’t be easy.”

Playbook: “What does this moderate surge do to Mike Bloomberg’s argument? Does it slow his rise — because a Bernie alternative is on the march — or halt it altogether? Or does it bolster his case that people are looking for a well-funded, tested alternative to Sanders?

“That move nearly doubled Ms. Klobuchar’s team on the ground in New Hampshire — a relatively small operation, but still a campaign that had organizational capacity to capitalize politically if the candidate had a breakthrough with voters.”

First Read: “Two contests down, and here’s the pledged delegate scoreboard: Buttigieg 23, Sanders 21, Warren 8, Klobuchar 7, and Biden 6. No other candidate has received a single delegate.”

“Remember, Democratic delegates are awarded proportionately, so to rack up big delegate hauls over the competition, you have to win big. (It’s why Sanders’ 1.5-point victory over Buttigieg netted the two men the same number of delegates from New Hampshire – 9. And it’s why Super Tuesday looms big.) Also remember, you need to hit at least 15 percent – either statewide or in congressional districts – to qualify for delegates. (Which is why both Warren and Biden came out of New Hampshire with zilch.)”

“Oh, and don’t forget the magic numbers. The first is 1,991. That’s the majority of total pledged delegates it will take to win the Democratic nomination on the first ballot at the Milwaukee convention.”

“The second (for now) is 2,376. That’s when the party’s 771 superdelegates get added to the mix for the second ballot and beyond, and that becomes your majority for all total delegates.”

The FiveThirtyEight forecast now shows a 34% chance at a contested convention and Sanders a 37% chance to win the majority of delegates.

Top Democrats tell Axios that if the split 2020 field persists through Super Tuesday, Bernie Sanders could build an insurmountable delegate lead while the moderates eat each other up.

1. Bernie’s Super Tuesday vote share is five points ahead of the second candidate (say, 30% to 25%). Bernie would net 96 delegates more than the next-highest-performing candidate. At that point, it would be possible but difficult to overtake Sanders: To become the nominee, that survivor would need to beat Bernie by an average of 53% to 47% in in remaining contests.

2.​ Bernie’s Super Tuesday vote share is 10​ points ahead of the second candidate (say, 30% to 20%). Bernie would net 198 delegates more than the next-highest-performing candidate. Overtaking Sanders would be unlikely: The field would need to clear, the and survivor would need to win each remaining contest on average 55% to 45% over Bernie.

3. Bernie’s Super Tuesday vote share is by 15 points ahead of the second candidate (say, 35% to 20%). Bernie would net 328 delegates more than the next-highest-performing candidate. The race would be all but over.

A new Alabama Daily News/Mason-Dixon poll finds Jeff Sessions leading the Republican primary for U.S. Senarw with 31%, followed by Tommy Tuberville at 29%, Bradley Byrne at 17% and Roy Moore at 5%.

If no candidate earns more than 50% of the vote in a primary election, the contest goes to a runoff between the candidates with the top two vote totals.