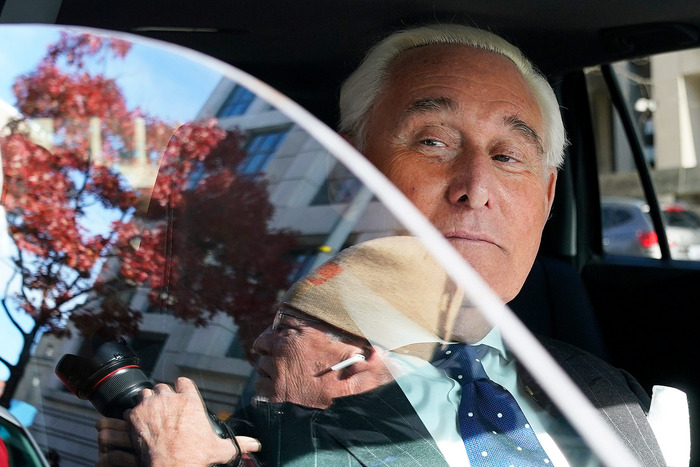 “In a stunning rebuke of career prosecutors that will surely raise questions about political meddling in the case, a senior Justice Department official said the department ‘was shocked to see the sentencing recommendation in the Roger Stone case last night.’”

This move comes after Trump denounced federal prosecutors’ recommendation of a 7 to 9-year prison sentence for Roger Stone. Said Trump: “This is a horrible and very unfair situation. The real crimes were on the other side, as nothing happens to them. Cannot allow this miscarriage of justice!”

Jonathan Chait: “Trump’s coy promise to take care of Stone is the latest step in a public communication between the two longtime partners.”

This is right out in the open, the most transparent politicization of the administration of justice. Whether the particular sentencing recommendation was the right one or not is beside the point. There are sentencing guidelines. There is a process that these recommendations go through. It’s the Trump pattern: mercy for friends, justice for foes.”

In a sign of fallout over the Justice Department’s decision to downgrade a sentencing memo for Roger Stone, all four Federal prosecutors on the case resigned in protest of the egregious and illegal action.

NBC News: “David Laufman, the Justice Department’s former counterintelligence chief, on Twitter called it “a shocking, cram-down political intervention in the criminal justice process. We are now truly at a break-glass-in-case-of-fire moment for the Justice Dept.”

The most corrupt Attorney General in all human history.

President Trump is withdrawing his nomination for former U.S. attorney for D.C. Jessie Liu to serve as the Treasury Department’s undersecretary for terrorism and financial crimes, Axios reports.

“Liu was expected to stay in her position as U.S. attorney through her confirmation — with a hearing before the Senate Banking Committee scheduled for this Thursday — but was unexpectedly informed last month that Attorney General Bill Barr was replacing her with his close adviser Timothy Shea.”

“She was informed that Trump was pulling her nomination Tuesday afternoon.”

Newly revised figures from Trump’s own Department of Labor show that 6.6 million new jobs were created in the first 36 months of Trump’s tenure, compared with 8.1 million in the final 36 months of Obama’s ― a decline of 19% under Trump, according to a HuffPost analysis.

“The Justice Department is in the late stages of deciding whether to charge businessman and Trump ally Erik Prince in an investigation into whether he lied to Congress in its Russia probe and violated U.S. export laws in his business dealings overseas,” the Wall Street Journal reports.

“Giuliani and his production team, led by veteran California Republican fixer Tim Yale, have been conducting interviews for the documentary… They have also approached potential investors in the film, showing them trailers with footage of former Vice President Joe Biden and actors portraying Hunter Biden and Ukrainian officials.”

“The White House is expected to pull the nomination of Elaine McCusker to be the Pentagon’s comptroller and chief financial officer in the latest staffing fallout from President Trump’s impeachment,” the New York Postreports.

“McCusker resisted the president’s directive to stall about $250 million in military aid to Ukraine and her emails protesting the delay were leaked in January to the blog Just Security ahead of Trump’s Senate trial.”

The wealthiest one percent of Americans now account for 56% the value of equities owned by U.S. households, the Financial Times reports.

Sudan’s rulers have agreed to hand over ex-President Omar al-Bashir to the International Criminal Court, the BBC reports.

The former president faces charges of genocide, war crimes and crimes against humanity over the conflict that broke out in the country’s Darfur region in 2003.

Newly-unredacted emails obtained by Just Security “confirm that OMB, including the general counsel’s office, was fully in the loop about the Pentagon’s concerns about Ukraine aid hold and took active steps to bury them.”

Washington Post: “The company, Crypto AG, got its first break with a contract to build code-making machines for U.S. troops during World War II. Flush with cash, it became a dominant maker of encryption devices for decades, navigating waves of technology from mechanical gears to electronic circuits and, finally, silicon chips and software.”

“The Swiss firm made millions of dollars selling equipment to more than 120 countries well into the 21st century. Its clients included Iran, military juntas in Latin America, nuclear rivals India and Pakistan, and even the Vatican.”

“But what none of its customers ever knew was that Crypto AG was secretly owned by the CIA in a highly classified partnership with West German intelligence. These spy agencies rigged the company’s devices so they could easily break the codes that countries used to send encrypted messages.”

Senate Budget Committee Chairman Mike Enzi (R-WY) said he will not hold a hearing on President Trump’s proposed fiscal 2021 budget because it would only spark “animosity” between Democrats and administration officials, The Hill reports.

Federal prosecutors want to use Michael Flynn’s former defense lawyers against him as they resist his attempts to get out of his guilty plea for lying to the FBI in 2017, CNN reports.

New filings even hint that DOJ would be willing to charge Flynn with perjury, or to take Flynn to trial if the judge allowed him to change his plea to not guilty.

Eliot Cohen: “In the near term, that speech will do neither Romney nor his cause any good. The armies of trolls and sneering louts will come after him, their jeers all the louder because they emanate from a terrified emptiness within. Shambling, tongueless, and invertebrate politicians who deep down know better will resent Romney for having the courage to say what they believed, but dared not utter.”

“But that speech will last. When future anthologies of great American political speeches are published by the Library of America, Romney’s remarks will be there. The language was American rhetoric at its best: not flowery and orotund, but clear and solid and stark.”

“Political speeches derive their power and durability from authenticity, from the way in which phrases and sentences seem to emanate directly from a personality and its vision. That is why Lincoln’s speeches will never lose their force: They captured the dignity, simplicity, and courage of the man who made them. Romney is no Lincoln, but he wrote the speech, and the voice is his.”