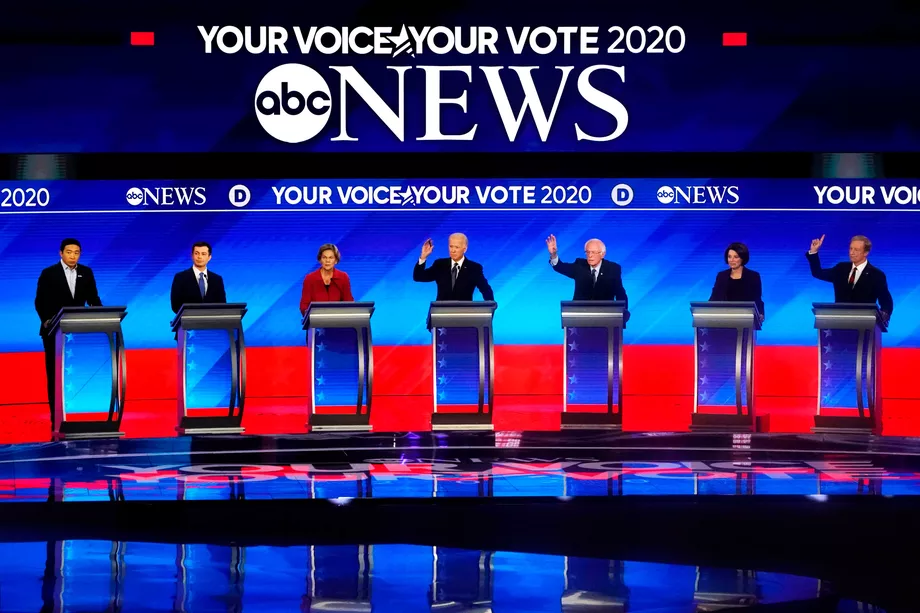 The knives were out for Pete Buttigieg last night at the New Hampshire Democratic Primary debate as a result of his win in the Iowa Caucus and surge in the polls in New Hampshire (see below). Buttigieg’s co-leader, Bernie Sanders, escaped from the debate unscathed because no one really knows how to attack him, and are wary of incurring the wrath of his supporters. In that way, and in the way this primary is setting up, the 2020 Democratic primary is most reminiscent of the 2016 GOP primary, where Trump won 25% of the vote in every early contest but won because his opponents were divided and crowding the lane of opposition, all the while all couldn’t figure out how to stop him.

The difference though is that Democratic contests are not winner take all like Republican contests were, so Bernie won’t stampede to the nomination by just winning 25% of the vote.

Each non-Bernie candidate had a good debate performance, yes even Joe Biden, and Buttigieg was adept at responding to the attacks coming his way but his only memorable moment was defending Biden and his son, Hunter.

But that’s the problem. No one is standing out, and the problem gets worse because Mike Bloomberg is waiting out there and becoming an attractive option. So that is why Sanders won the debate and that is why he is the favorite for the nomination.

For Democrats worried Sanders would be a disaster in the general election, a decision looms in the next couple of weeks: They must pick one candidate: Bloomberg, Biden, Warren, Buttigieg and Klobuchar.

Matthew Yglesias: “Sen. Bernie Sanders is a highly skilled politician, and at Friday night’s debate he showed it.”

“The Democratic Party is polarized right now between Bernie fans who insist that democratic socialism is the way forward and an establishment that’s terrified Sanders will bring electoral doom. The truth, however, is a bit more boring. Far-left politics isn’t really a winning hand, but Sanders himself is an effective player who consistently outperforms the partisan fundamentals in his races.”

“Those talents were on display Friday evening at the New Hampshire debate, where he stayed relentlessly on message, emphasized the popular aspects of his agenda, and avoided major pitfalls. As long as he can avoid the trap of believing too much of his own hype, he has the ability to craft a winning message for November.”

Aaron Blake: “Sanders weathered early attacks on his electability — partially because the other candidates didn’t completely commit to the attack — and proceeded to have a mostly easy debate.”

A new Boston Globe/WBZ-TV/Suffolk University poll finds Pete Buttigieg leading in the New Hampshire race with 25%, followed by Bernie Sanders at 24%, Elizabeth Warren at 14% and Joe Biden at 11%.

A new NBC News/Marist poll finds Bernie Sanders leading the Democratic primary race with 25%, followed by Pete Buttigieg at 21%, Elizabeth Warren at 14%, Joe Biden at 13% and Amy Klobuchar at 8%.

A new Boston Globe/WBZ-TV/Suffolk University poll in New Hampshire finds Bernie Sanders leading the Democratic primary with 24%, followed closely by Pete Buttigieg at 23%, Elizabeth Warren at 13% and Joe Biden at 11%.

“The head of the national Democratic Party has already demanded the results be recanvassed. That demand, plus potential errors in the count, mean that the results may not be final and will likely be disputed.”

Rep. Doug Collins (R) has launched an attack ad against Sen. Kelly Loeffler (R) in the Georgia Senate race by going after her past financial support for Sen. Mitt Romney (R-UT).

Said Yang: “Every bit of good we do in the state of New Hampshire gives us a chance to make history right now on Tuesday, but it also enables us to build a following and support base for the ideas that energize this campaign and for the future.”

He went on: “Imagine a world where we put up a really great number on Tuesday, and then let’s say we decide to run this back again in four years. If you start with that base in New Hampshire, plus everything that we have the next time around, we’re going to be even better positioned to see the goals of this campaign through, eradicate poverty, improve the human condition, and help move this country we love forward in the right direction.”

Michael Bloomberg has surged to second in the betting markets behind Bernie Sanders for winning the Democratic presidential nomination.

“Anita Dunn, a veteran Democratic operative and top adviser to Joe Biden, is taking on an expanded role in his campaign as he seeks a reset after a disastrous fourth-place finish in the Iowa caucuses,” the New York Times reports.

“The move follows days of speculation inside Mr. Biden’s Philadelphia headquarters about potential staff shake-ups following a disappointing Iowa result that has complicated Mr. Biden’s path forward. Before her elevation, Ms. Dunn had been focused chiefly on communications strategy.”

“You can argue about whether Minnesota—a cradle of liberalism that produced Hubert Humphrey, Walter Mondale and Paul Wellstone—is a pipe dream for Trump in 2020. Or whether Texas—where Republicans hold all nine statewide elected offices, both Senate seats and both chambers of the Legislature—will truly be in play in November. But one thing seems increasingly inarguable: This presidential race will be fought on electoral terrain that would have been unthinkable four years ago, before Trump blew everything up.”

Former Rep. Joe Walsh (R-IL) told CNN he is ending his uphill challenge against Donald Trump for the 2020 Republican presidential nomination, after suffering a crushing loss in the Iowa GOP caucuses in which he received only 1% of the vote.

New York Times: “Mr. Bloomberg told the group that he did not want their money and would not accept it if they offered it. What he wanted, he said, was their personal support.”

“It was the kind of appeal that only a self-funding billionaire could deliver. And indeed, Mr. Bloomberg went a step further: If they felt compelled to write a check, he told them to send it to the Democratic National Committee or the progressive group Swing Left.”

“Mr. Bloomberg has made versions of that pitch at several events in recent weeks, in major cities including Los Angeles, Philadelphia and New York. It has unnerved — and sometimes intrigued — supporters of other Democratic candidates, who fear that Mr. Bloomberg’s charm offensive could discourage giving to other candidates who lack multibillion-dollar personal fortunes with which to fund their efforts.”

“The Navy secretary ousted by President Trump said Thursday that he would endorse Michael R. Bloomberg for president, a high-profile defection that Mr. Bloomberg’s allies hope will convince Democratic voters that their best chance of defeating Mr. Trump is the former mayor of New York,” the New York Times reports.

“Richard Spencer, who was ousted as Navy secretary in November after he publicly disagreed with Mr. Trump’s intervention in an extraordinary war crimes case involving a member of the Navy SEALs, is a lifelong Republican.”