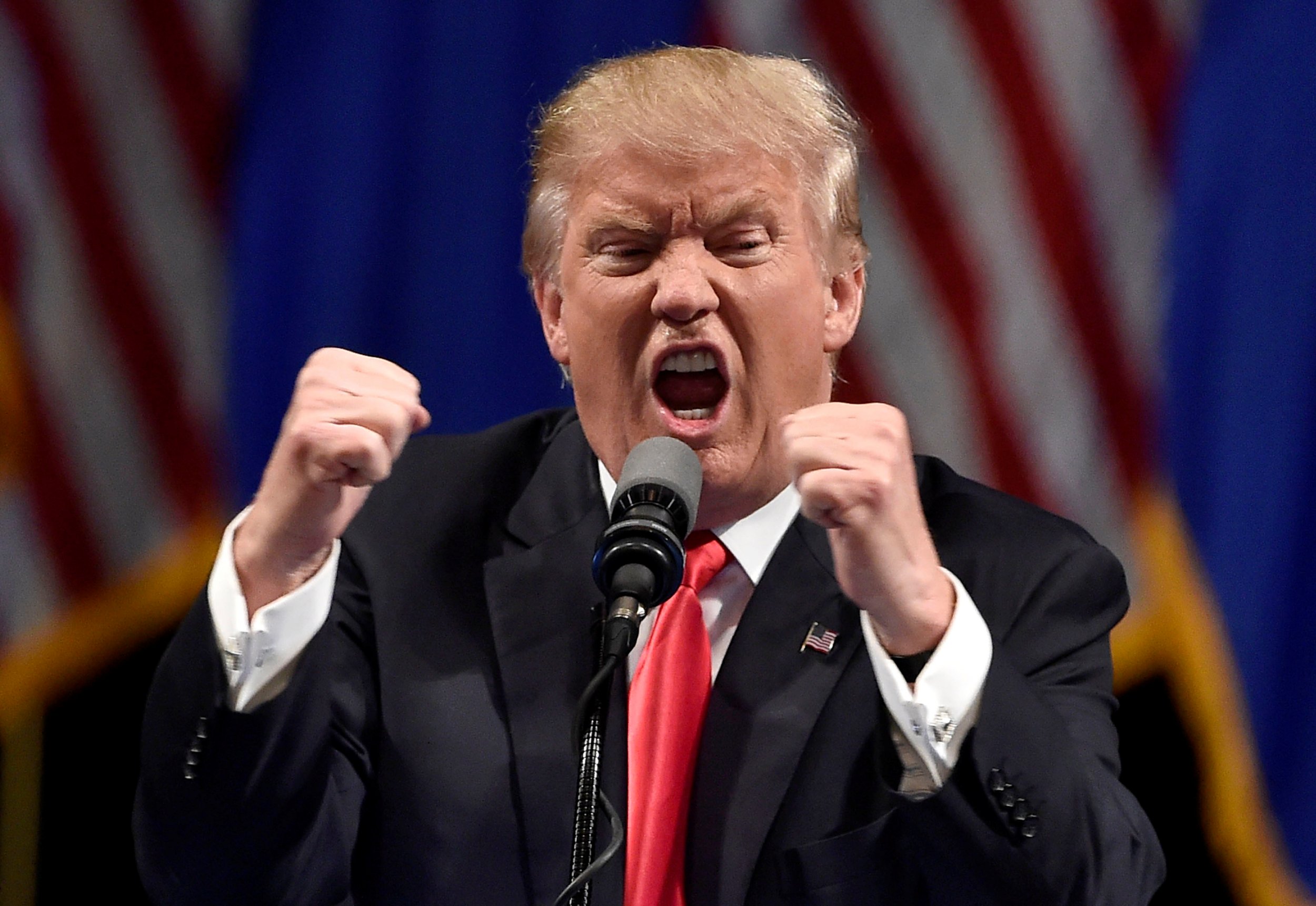 President Trump lashed out at Democrats at a national prayer breakfast, the Washington Post reports. Said Trump: “As everybody knows, my family, our great country and your president has been put through a terrible ordeal by some very dishonest and corrupt people.”

He also specifically hit Sen. Mitt Romney and Speaker Nancy Pelosi: “I don’t like people who use their faith as justification for doing what they know is wrong… Nor do I like people who say, ‘I pray for you,’ when they know that that’s not so.”

“I want to say again how profoundly sorry I am for what I said and did… and for the great burden they have imposed.” — Bill Clinton post-impeachment, February 1999.

“It was all bullshit.” — Donald Trump post-impeachment, February 2020.

John Harris: “President Trump is acquitted, but the consensus view — shared by nearly all Democrats and even a decent number of Republicans — is that the United States Senate did nothing to acquit itself. Wednesday’s vote — anticipated with near-perfect precision since the opening hours of the Ukraine scandal in September — has yielded a new indictment: The partisan divisions that saved Trump are an expression of deeper and malignant trends that are a threat to constitutional democracy.”

“By all means count me in for mournful sermons about the poor civic hygiene of America in the Age of Trump. The patient is indeed sick. But it is not because the pulse of democracy is growing faint. To the contrary, the fundamental problem of modern political culture is the erosion of accountability. Politicians have shown repeatedly the ability to escape consequences by reframing almost any controversy away from the particulars of misbehavior to the familiar question: Which side are you on, mine or my enemies?”

Garrett Graff: “Today, 10 months remain in an election where the president now knows that there is practically nothing he can do that would cause his removal from office. The Justice Department maintains that Trump cannot be criminally charged while president, and the GOP has made clear that their ultimate test this year is to ‘let the voters decide.’ That combination leaves no path for accountability. The House may very well continue its investigation of Trump’s various crimes starting today—perhaps by calling John Bolton—but Donald Trump knows he is, as Axios’ Jonathan Swan reported this week, borderline invincible.”

“The upshot is that Donald Trump can apparently do anything he wants to rig, influence, or invite foreign powers to tinker with the integrity of the election that will decide his fate. And he can do it all with the full powers of the presidency.”

New York Times: “When the history books are written about this day, they will surely record it as the culmination of a monumental three-year political battle that tested American democracy and delivered victory to an enraged and enraging president over his relentless foes. But they will not record it as the end of the struggle.”

“President Trump’s acquittal on Wednesday after a fiery three-week Senate impeachment trial provided him a moment of triumph, a sense of validation, a shot of momentum — anything but the finality that he might want. The president who vowed to bring an end to endless wars overseas remains at the center of an endless war at home, one that now moves to the campaign trail and will not be resolved until November at the earliest.”

“Rather than reaching out to bind the wounds, as President Bill Clinton did after his own Senate impeachment trial in 1999, Mr. Trump made clear minutes after the final roll call that he planned to go on the offensive.”

Peter Beinart: “The impeachment struggle is now over. Historians may one day vindicate Democrats for exposing Donald Trump’s abuse of power. But as of now, they have lost. Not only will Trump remain president, and not only does he appear stronger politically than before the impeachment battle began, but he has succeeded in doing precisely what he wanted in the first place: He tarred Joe Biden, who last year looked like Trump’s most formidable Democratic rival, with the kind of vague suspicion of wrongdoing that presidential candidates can’t easily shake…”

“By keeping Hunter Biden’s business dealings in Ukraine in the news, they have turned them into a rough analogue to Hillary Clinton’s missing emails in 2016—a pseudo-scandal that undermines a leading Democratic candidate’s reputation for honesty.”

Susan Glasser: “The trial was more fake than even the disinterested public could have anticipated—the first impeachment trial in the Senate’s history not to call a single witness.”

“Its end is a relief. At least we will not have to hear any more bogus speeches about the Founding Fathers or pabulum about the sanctity of the process. We are spared the faux horror of Alaska’s Lisa Murkowski, who chided Congress for its abdication of responsibility but didn’t want to hear the former national-security adviser John Bolton testify under oath about grave wrongdoing by the President. We are saved from the absurd rationalizations of Maine’s Susan Collins and Ohio’s Rob Portman, who reproved the President for his ‘wrong’ and ‘inappropriate’ conduct but insisted that Trump had learned his lessons and should not face any consequences. This, along with Romney’s last-minute declaration exposing their hollow pretense, is what passed for suspense in the trial.”

“But it was all misleading, a distraction, as pointless as their votes turned out to be.”

The sweeping order came a day after President Trump, in his State of the Union address, condemned Democratic states and local governments that “release dangerous criminal aliens to prey upon the public,” and called on Congress to pass a law establishing civil liability for sanctuary cities.

Ron Brownstein: “As I’ve written before, Trump is a war time president for red America against blue America.”

“A second official confirmed that the Trump-Johnson call was ‘very difficult.’ British officials with knowledge of the exchange said they were taken aback by the force of the president’s language towards Mr. Johnson.”

“The Missouri Attorney General’s office under Josh Hawley (R) may have misused state resources to boost his successful campaign for the U.S. Senate,” the Kansas City Star reports.

“Whether Hawley or his staff broke the the law is unclear, the report concludes, because they regularly conducted state business off government servers through use of private email and text messaging.”

“A planned UK tour by US evangelist Franklin Graham is in question after every venue booked by the preacher canceled planned appearances, following an outcry over his homophobic and Islamophobic comments,” CNN reports.

Edward Luce: “Of course, a week is a long time in politics. Things would look different if the Democrats united behind a good nominee and voters felt the slowdown in U.S. growth. Against that, however, are the stubborn facts. Three years after taking office, Mr Trump is the least unpopular he has ever been. Moreover, he can do almost what he wants before November without fear of restraint. Impeachment was hardly a blip. Inviting foreign interference cost him nothing. The vote-counting fiasco in Iowa shows how easy it would be to contaminate public trust in the election process.”

“U.S. democracy is sleepwalking into great danger. Yet somehow it feels as though everything is normal.”

Sen. Sherrod Brown (D-OH): “In private, many of my colleagues agree that the president is reckless and unfit. They admit his lies. And they acknowledge what he did was wrong. They know this president has done things Richard Nixon never did. And they know that more damning evidence is likely to come out.”

“So watching the mental contortions they perform to justify their votes is painful to behold: They claim that calling witnesses would have meant a never-ending trial. They tell us they’ve made up their minds, so why would we need new evidence? They say to convict this president now would lead to the impeachment of every future president — as if every president will try to sell our national security to the highest bidder.”

“I have asked some of them, ‘If the Senate votes to acquit, what will you do to keep this president from getting worse?’ Their responses have been shrugs and sheepish looks.”

“Attorney General William P. Barr issued new restrictions on Wednesday over the opening of politically sensitive investigations, an effort meant to avoid upending the presidential election as the F.B.I. inadvertently did in 2016 when its campaign inquiries shaped the outcome of the race,” the New York Times reports.

“The memo said that the F.B.I. and all other divisions under the department’s purview must get Mr. Barr’s approval before investigating any of the 2020 presidential candidates.”

The Treasury Department has complied with Republican senators’ requests for highly sensitive and closely held financial records about Hunter Biden and his associates and has turned over “evidence of questionable origin” to them, Yahoo News reports.

Said Schiff: “So for whatever reason, he apparently was willing to testify before the Senate but apart from that, seems intent on saving it for his book. He’ll have to answer for that.”