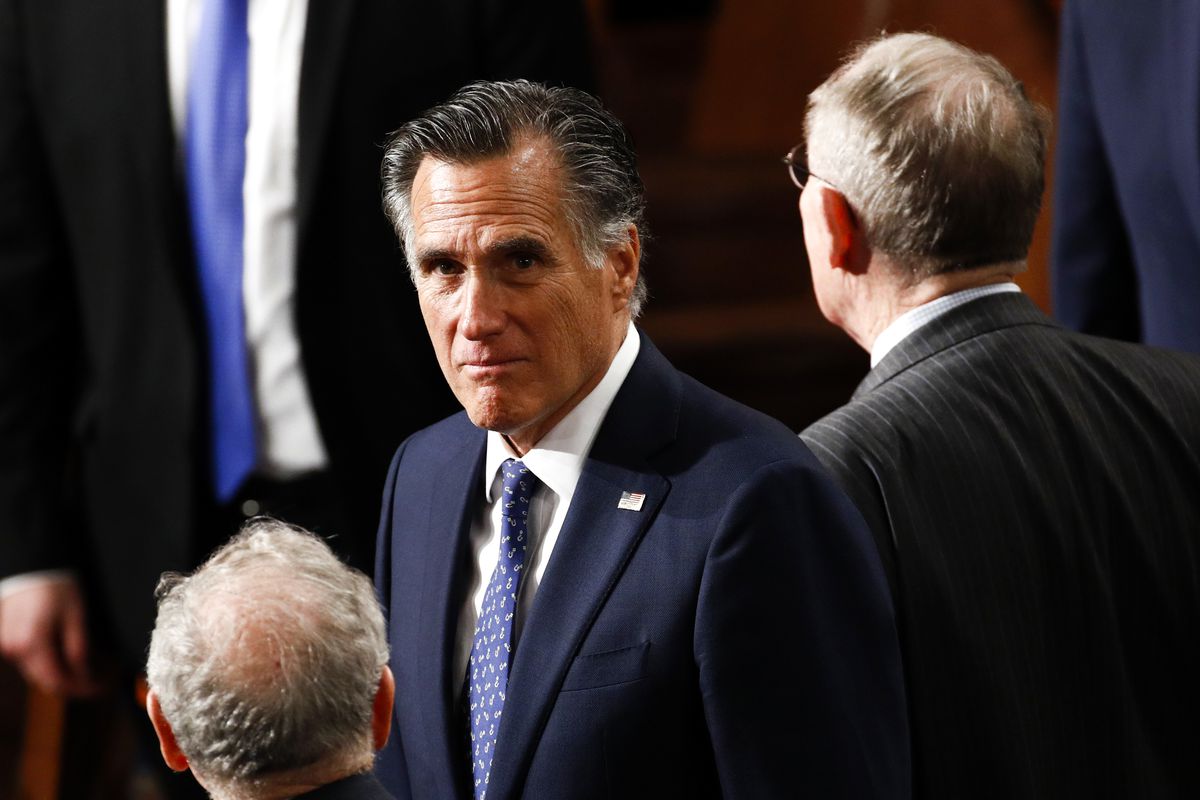 Every other Republican voted to acquit the president.

Ari Berman: “The 48 Senators who voted to convict President Trump represent 18 million more Americans than 52 Republicans who voted to acquit.”

New York Times: “When all the partisan posturing, parliamentary wrangling and legalistic arguing are stripped away, the impeachment process that dominated Washington for months produced a set of facts that is largely beyond dispute: The president of the United States pressured a foreign government to take actions aimed at his political opponents.”

“As the Senate moved toward acquitting President Trump on Wednesday, even some Republicans stopped trying to defend his actions or dispute the evidence, focusing instead on the idea that his conduct did not deserve removal from office, especially in an election year.”

Playbook: “After 4 p.m. today, impeachment is over, and we’re left to wonder: Did it matter politically? Republicans are more firmly in the president’s corner, and Democrats seem to hate him more than ever. There are now 272 days until Election Day — and hundreds more news cycles. By November, it’s anyone’s guess what we’ll all be talking about.”

Sen. Mitt Romney (R-UT) voted to convict President Trump on abuse of power, the New York Times reports. Said Romney: “I think the case was made.”

He added: “I believe that attempting to corrupt an election to maintain power is about as egregious an assault on the Constitution as can be made. And for that reason, it is a high crime and misdemeanor and I have no choice under the oath that I took but to express that conclusion.”

Romney told the Washington Post that his decision to vote to convict the president “the hardest decision” he has ever had to make.

CNBC: “Just as Sen. Romney finished speaking, the White House announced that reporters will now no longer be invited to the Oval Office for the pool spray that was scheduled at 2:15 pm. Reporters were already on the South Lawn and ready to go in when the White House cancelled it.”

“Days before the July 2019 call between President Trump and his Ukrainian counterpart, U.S. officials were still working to expedite the delivery of Javelin anti-tank missiles to the country,” according to emails reviewed by CNN.“The new information underscores how the July 18th decision to hold the military aid stunned officials, who had already assessed Ukraine deserved to receive it and were preparing a Javelin missile order as well. The decision reverberated across the government for weeks. Officials grew so concerned over the deferrals by the Office of Management and Budget that they noted the aid was at ‘serious risk,’ and questioned if the move was illegal.”

President Trump’s State of the Union address drew a considerably smaller audience on the broadcast networks — down about 25% from the comparable figure last year, according to the Hollywood Reporter.

Associated Press: “At least 138 people deported to El Salvador from the U.S. in recent years were subsequently killed, Human Rights Watch says in a new report that comes as the Trump administration makes it harder for Central Americans to seek refuge here.”

“The organization also confirmed at least 70 cases of sexual assault or other violence following their arrival in the country.”

The Washington Post flags 31 false or misleading statements in President Trump’s State of the Union address. “Many of these claims have been fact-checked repeatedly, yet the president persists in using them.”

Josh Kraushaar: “The chaos of the Iowa caucuses on Tuesday night obscured an alarming reality for Democrats: President Trump now looks like a narrow favorite to win a second term in office.”

“The latest wave of national polls show Trump hitting or nearing all-time highs in his job-approval rating—even after weeks of impeachment proceedings. Gallup’s latest tracking survey showed his job-approval rating at 49 percent, tantalizingly close to an outright majority of the country. The president is delivering his State of the Union address amid a strong economy and growing consumer confidence. Nearly two-thirds of the country approve of his economic stewardship—the highest rating on this score in nearly two decades. Republicans look energized and united behind the president.”

“He shredded the truth so I shredded his speech.” — Speaker Nancy Pelosi, quoted by The Hill, in a meeting with House Democrats.

President Trump dismissed Sen. Susan Collins’s (R-ME) comment that he had “learned a lesson” from impeachment, the Washington Post reports.

When asked about Collins’s comment during a lunch with news anchors ahead of the State of the Union address, Trump said that he’d done nothing wrong.

Said Trump: “It was a perfect call.”

Josh Marshall on the significance of Mitt Romney’s vote to convict: “

After the witness bar was surmounted, a number of Republican senators piped up and said well, he clearly did something wrong but it’s not wrong enough or it doesn’t matter or something else. Romney’s statement puts the lie to this in what I suspect is a pretty uncomfortable way, and one which will be damaging to at least a few reelection candidates in November. He’s saying, no, you weren’t willing to say he was wrong. You said it was fine. And that really is what they’re saying. Because they’re cowards and derelict in their duties.

There is a reasonable argument and one that I believe in that you can believe the President is guilty of wrongdoing but still have it come short of what is necessary for removal from office. I think you can also say the President is guilty but there are prudential reasons to refrain from removal. What you can’t say is that I will vote to block even hearing any witnesses. That doesn’t add up. That means you know it is very bad but you have different priorities. You don’t care.”

The FBI director on Wednesday danced around a question about whether the President Donald Trump or anyone from his administration had sought investigations from the Bureau as retaliation over Trump’s impeachment.

“Has the President, the attorney general or any other administration official asked the FBI to open an investigation into Joe Biden, Hunter Biden, John Bolton or any member of Congress?” Chairman Nadler asked.

Wray chuckled slightly, then said “I have assured the Congress, and I can assure the Congress today that the FBI will only open investigations based on the facts and the law and proper predication.”

Nadler understood that, he said. “And I assume that it is correct that neither the President, the attorney general or any other administration official has asked the FBI to open improper political investigations?” Again, Wray didn’t exactly answer the question. “And no one has asked me to open an investigation based on anything other than the facts, the law and proper predication,” he said.

Kevin Roose: “Basically, we should be begging for the most analog election technology possible. Because what happened on Monday night — a long and confusing delay in vote counting, due in part to a mobile app that was hastily designed and inadequately tested before being deployed in one of America’s most important elections — was an inexcusable failure. It caused distress and confusion, set off innumerable conspiracy theories, and started the 2020 election season by undermining trust in the democratic process.”

“And all because Iowa Democrats wanted a new app.”

ProPublica: “A glitch in the smartphone app used to count and report votes from individual precincts continues to delay results from Monday’s Iowa caucuses. But a closer look shows that the app had a potentially graver problem that apparently did not come into play: its vulnerability to hacking.”

“The IowaReporterApp was so insecure that vote totals, passwords and other sensitive information could have been intercepted or even changed, according to officials at Massachusetts-based Veracode, a security firm that reviewed the software at ProPublica’s request.”