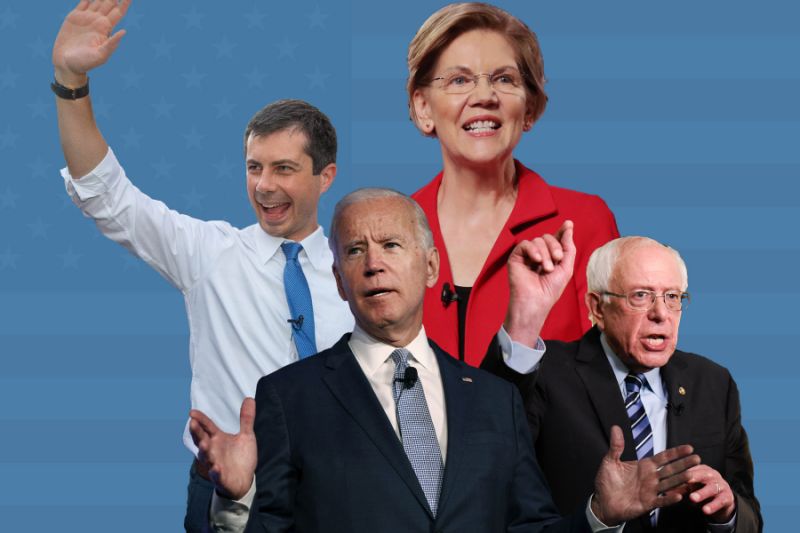 Pete Buttigieg and Bernie Sanders are in a tight race for first place as Iowa continued reporting the last of its Democratic presidential caucus results early Thursday morning, CNN reports.

With 97% of Iowa’s precincts reporting, the former mayor remained the leader of the race, with 26.2% of state delegates. He’s closely trailed by Sanders, with 26.1%.

John Couvillon: “We can now say that Democratic turnout was the second highest ever, as it just exceeded the 2016 numbers. With 3% more to count.”

New York Times: “The results released by the Iowa Democratic Party on Wednesday were riddled with inconsistencies and other flaws. According to a New York Times analysis, more than 100 precincts reported results that were internally inconsistent, that were missing data or that were not possible under the complex rules of the Iowa caucuses.”

“In some cases, vote tallies do not add up. In others, precincts are shown allotting the wrong number of delegates to certain candidates. And in at least a few cases, the Iowa Democratic Party’s reported results do not match those reported by the precincts.”

DNC Chairman Tom Perez suggests final Iowa results aren’t coming soon: “Enough is enough. In light of the problems that have emerged in the implementation of the delegate selection plan and in order to assure public confidence in the results, I am calling on the Iowa Democratic Party to immediately begin a recanvass.”

A new Monmouth poll in New Hampshire finds Bernie Sanders leading the Democratic presidential race with 24%, followed by Pete Buttigieg at 20%, Joe Biden at 17%, Elizabeth Warren at 13% and Amy Klobuchar at 9%.

Others registering support include Tulsi Gabbard at 4%, Andrew Yang at 4%, and Tom Steyer at 3%.

Said pollster Patrick Murray: “The muddle out of Iowa hasn’t narrowed the field, but there are some hints in the poll that Buttigieg could be helped and Biden hurt as the caucus results start to sink in.”

Dan Balz: “Joe Biden has a problem, and it’s not just that no Democrat has finished a weak fourth in the Iowa caucuses and gone on to become the party’s presidential nominee. The problem is Joe Biden the candidate.”

“Biden has been a lackluster advocate for his own candidacy, and the weakness of that advocacy was an unwelcome element of his campaign. In Iowa, it came crashing in on him. If he truly wants to be president, he doesn’t have to look far for answers as to what happened. His organization certainly failed him, but he contributed significantly to what happened there.”

“He has run the way others have as the comfortable expression of establishment Democratic politics. He has piled one endorsement upon another, hoping that surrogates will vouch for him in ways he’s not been able or willing to do for himself. But surrogates can do only so much. In the closing days, Biden struggled to make a compelling case for himself. At rallies, he lacked focus and sometimes appeared distracted, interrupting himself with asides or random thoughts.”

The FiveThirtyEight forecast now shows Bernie Sanders with a 37% chance at winning the Democratic nomination, followed by Joe Biden at 21%, Elizabeth Warren at 10% and Pete Buttigieg at 6%. There is also a 27% chance no one will receive a majority of delegates, which would mean a contested convention.

Washington Post: “While the rest of the Democratic field tries to recover from Iowa and pivot to New Hampshire, Bloomberg is seizing the moment to gain an advantage — doubling his television spending in key states, expanding his staff to more than 2,000, and traveling the country to introduce himself as a competent and accomplished manager.”

“The sheer size and machine-like efficiency of Bloomberg’s campaign, for which he has already paid more than $200 million of his own fortune, is distinct compared with the troubling performance of party leaders in Iowa and stumbling by former vice president Joe Biden.”

Pete Buttigieg told the New Hampshire Union Leader he can ‘absolutely’ win the first-in-the-nation primary, while admitting it will be more difficult than his breakthrough showing at the Iowa caucus.

Said Buttigieg: “I recognize I am competing with not one but two New England senators from states touching New Hampshire. We recognize this is a competitive challenge but I think that the independent nature that is so important here in New Hampshire also allows us to prove once again that this is a campaign that can bring in many different kinds of people across the spectrum and form the coalition that can defeat Donald Trump.”

Politico: “A senior adviser for Pete Buttigieg’s campaign tweeted what appeared to be a signal for help to super PAC supporters on Wednesday, a notable injection of big-money politicking into a Democratic presidential race that has been defined in large part by opposition to super PACs and their influence.”

Sen. Elizabeth Warren’s campaign is trying to conserve cash and pulled down TV ads in Nevada and South Carolina after a disappointing third-place standing in Iowa that failed to provide a fundraising bump, the Washington Post reports.

Sen. Bernie Sanders, who has become a financial juggernaut in the Democratic presidential race, raised $25 million in January, a massive sum that he is using to expand investments in staff and television advertising in key states, the Washington Post reports.

“The Sanders campaign said Thursday that it will spend more than $5.5 million in television and digital commercials across eight new states, and it will increase its advertising California and Texas, which vote on March 3. The campaign is also increasing staff in other states voting that day, known as Super Tuesday.”

McKay Coppins: “One day last fall, I sat down to create a new Facebook account. I picked a forgettable name, snapped a profile pic with my face obscured, and clicked ‘Like’ on the official pages of Donald Trump and his reelection campaign. Facebook’s algorithm prodded me to follow Ann Coulter, Fox Business, and a variety of fan pages with names like ‘In Trump We Trust.’ I complied. I also gave my cellphone number to the Trump campaign, and joined a handful of private Facebook groups for MAGA diehards, one of which required an application that seemed designed to screen out interlopers.”

“The president’s reelection campaign was then in the midst of a multimillion-dollar ad blitz aimed at shaping Americans’ understanding of the recently launched impeachment proceedings. Thousands of micro-targeted ads had flooded the internet, portraying Trump as a heroic reformer cracking down on foreign corruption while Democrats plotted a coup. That this narrative bore little resemblance to reality seemed only to accelerate its spread. Right-wing websites amplified every claim. Pro-Trump forums teemed with conspiracy theories. An alternate information ecosystem was taking shape around the biggest news story in the country, and I wanted to see it from the inside.”

“The story that unfurled in my Facebook feed over the next several weeks was, at times, disorienting. There were days when I would watch, live on TV, an impeachment hearing filled with damning testimony about the president’s conduct, only to look at my phone later and find a slickly edited video—served up by the Trump campaign—that used out-of-context clips to recast the same testimony as an exoneration. Wait, I caught myself wondering more than once, is that what happened today?”

Walter Shapiro: “On one level, Bernie Sanders should be pleased that he attracted (based on returns from 85 percent of Iowa precincts) the most initial support in the caucuses. But tellingly, Sanders failed to win over many converts on the second round of voting, which is how Buttigieg moved ahead. This is the Bernie Barrier in the presidential race: Democrats are either for him or against him. Very few fall in the ambivalent middle. And, presumably, Sanders cannot win a nomination with a ceiling of maybe 30 percent of the vote.”

Flashback to 2016: Has Trump hit his ceiling?

Jonathan Chait: “To be sure, if Bloomberg is the last Democrat standing against Sanders, he may well attract substantial support from Democratic elected officials and put up a strong fight. Still, he would face enormous opposition from the left. This is, after all, a billionaire who endorsed George W. Bush in 2004. And while the left has previously whipped itself into an angry frenzy against, successively, O’Rourke, Biden, Harris, and Buttigieg, the rage against Bloomberg would reach a new level.”

“At that point, the victory scenario would involve a long, bloody struggle all the way to the convention, with the Sanders movement claiming at every step of the way that the party is rigging the race against them, culminating in a convention where his enraged supporters will again try to shout down the proceedings. This is probably the best-case scenario for liberals at this point. It seems more probable that Sanders crushes the field and brings his historically unique suite of liabilities to the ticket.”

Politico: “What if everything you think you know about politics is wrong? What if there aren’t really American swing voters—or not enough, anyway, to pick the next president? What if it doesn’t matter much who the Democratic nominee is? What if there is no such thing as ‘the center,’ and the party in power can govern however it wants for two years, because the results of that first midterm are going to be bad regardless? What if the Democrats’ big 41-seat midterm victory in 2018 didn’t happen because candidates focused on health care and kitchen-table issues, but simply because they were running against the party in the White House? What if the outcome in 2020 is pretty much foreordained, too?”

“To the political scientist Rachel Bitecofer, all of that is almost certainly true, and that has made her one of the most intriguing new figures in political forecasting this year.”

“House Democrats are clobbering their Republican challengers in the fundraising race, dramatically reducing the GOP’s chances of winning back the majority,” Politico reports.

“The roughly four dozen most endangered House Democratic incumbents raised a collective $28.5 million in the last three months of 2019, a staggering total that is nearly twice the sum of all of their Republican challengers combined.”

Andrew Yang’s campaign fired dozens of staffers this week after an abysmal finish in the Iowa caucuses, Politico reports.