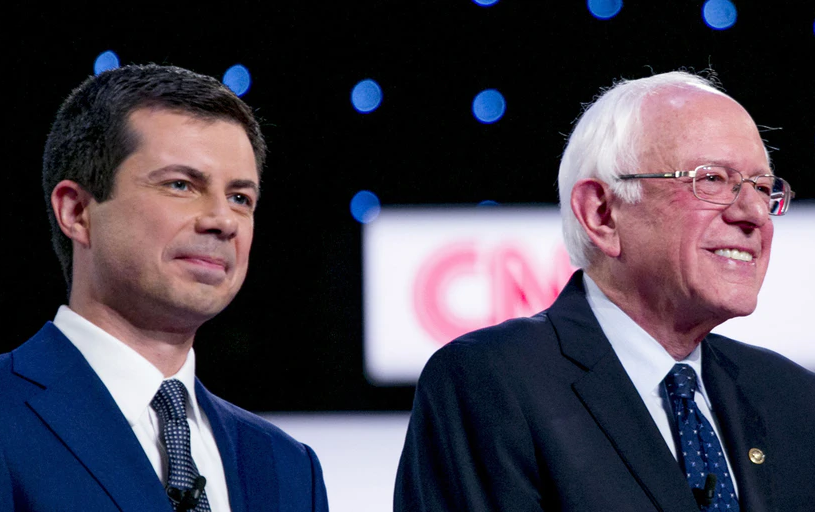 So where do the results in Iowa stand? As of this posting, the New York Times Iowa Results page reports that, with 86% of the precincts report, Pete Buttigieg continues to lead narrowly over Bernie Sanders, 26.7% to 25.4%. Elizabeth Warren is in third with 18.3% and Joe Biden is in fourth with 15.9%. Amy Klobuchar has 12.1%.

“I’m not going to sugarcoat it. We took a gut punch in Iowa.” — Joe Biden, quoted by Politico.

“Joe Biden’s campaign tried to reassure donors that the former vice president is on track to win the Nevada caucus and the South Carolina primary,” CNBC reports. “The call left the donors feeling positive about Biden’s efforts in those two states.”

Sean Trende: “We shouldn’t mince words here: Biden had an awful night. Yes, Iowa is a heavily white state, and it is a caucus rather than a primary, so it didn’t play to his strengths. Nevertheless, Biden is a former vice president to a very popular ex-president. He has universal name recognition and the implicit backing of large swaths of the Democratic establishment.”

“Yes, he can still recover in South Carolina, although that is looking much less probable than it did Monday morning. If his African-American support remains solid, he will perform well in the South. But his weakness among Northern whites is a red flag for states where he will need to win — and where he can’t rely on African-American support to push him over the top. If he’s coming in fourth place in Iowa, delegate-rich states like Wisconsin, Michigan, Illinois, and Ohio are likely to be challenging for him as well.”

“Looming over all of this is the question of money. All of the candidates spent heavily on Iowa, and Biden needs to replenish his coffers. Will donors stick with him through New Hampshire? Almost certainly. But how many underperformances can he turn in before they abandon him?”

“Pete Buttigieg, who appears headed toward a first- or second-place finish in the Iowa caucuses based on partial results, is taking a break from his victory lap to raise money,” the New York Times reports.

“According to his public schedule, he held a fund-raiser in Summit, N.J., Wednesday afternoon and was planning two in New York City: one Wednesday night and one Thursday morning. Next week, after the New Hampshire primary, he will head to California for several more fund-raisers.”

John Mellencamp cut an ad for Mike Bloomberg saying the former big city mayor would be the best choice for small towns across America.

Wall Street Journal: “In a sign of Mr. Bloomberg’s growing strength, he staged a rally in Philadelphia—about a mile from Mr. Biden’s campaign headquarters—that drew more than 2,000 people.”

“A mysterious outside group that sprang into existence only last week will spend more than $1 million in television advertisements backing North Carolina state Sen. Erica Smith (D), one of the candidates running to challenge Sen. Thom Tillis (R) in November,” The Hill reports.

And then let that be the last caucus ever end in a Democratic contest ever again.

The Boston Globe’s editorial board withheld its presidential endorsement and instead called for the end of the first-in-the-nation presidential votes in Iowa and New Hampshire.

In an upset, the AP has called the Maryland 7th congressional district special  primary for former Rep. Kweisi Mfume (D-MD) over the widow of the late Rep. Elijah Cummings (D-MD), Maya Rockeymoore Cummings.

“Joe Biden’s third presidential bid enters a critical stretch after a disappointing finish in the Iowa caucuses sent the former vice president on to New Hampshire with a skittish donor base, low cash reserves and the looming threat of billionaire rival Michael Bloomberg and his unlimited personal wealth,” the AP reports.

“That leaves some establishment Democrats, including some Biden supporters, questioning his contention that he’ll reclaim clear front-runner status in the race against President Trump once the primary fight moves beyond overwhelmingly white Iowa and New Hampshire to more racially diverse electorates. And it’s a reminder of how Biden’s previous presidential campaigns never advanced beyond Iowa.”

“A group of prominent South Carolina Republicans is preparing to launch a wide-scale effort this week to encourage GOP voters to vote for Sen. Bernie Sanders in the February 29 Democratic primary,” the Charleston Post and Courier reports.

“The Republican plan to meddle in the Democratic race, emerging just weeks before the ‘First in the South’ primary, has two goals: Boost the candidate who the Republicans believe presents the weakest general election threat to President Trump and pressure Democrats to support closing state primaries in the future.”

Vanity Fair: “The order of finish, whenever it arrives, matters to Bloomberg’s long-shot prospects: The weaker the results for Joe Biden and the stronger the numbers for Bernie Sanders and for Elizabeth Warren, the better for Bloomberg, who is positioning himself as a moderate with deep governing experience and a bottomless bank account.”

“But the Iowa muddle is already allowing Bloomberg to emerge as a perceptual victor: The candidate of cold-blooded competence who has been a high-profile success in both private business and public office. A campaign aide says that today Bloomberg is ‘immediately increasing ad spending in current markets and adding new markets, with our total gross ratings points doubling from 1,200 to 2,400.’ In civilian language: You won’t be able to turn on a TV or a computer without seeing a Bloomberg ad.”

“Melania Trump is slated to headline a pair of spring fundraisers for her husband’s reelection campaign, a move that represents a dramatic step into the political spotlight for the famously private first lady,” Politicoreports.

New York Times: “Encouraged by the murky outcome, Mr. Bloomberg authorized his campaign team to double his spending on television commercials in every market where he is currently advertising and expand his campaign’s field staff to more than two thousand people.”

Said Bloomberg: “It’s much more efficient to go to the big states, to go to the swing states. The others chose to compete in the first four. And nobody makes them do it, they wanted to do it. I think part of it is because the conventional wisdom is ‘oh you can’t possibly win without them.’ Those are old rules.”

Karen Tumulty: “Even as the Iowa Democratic Party was trying to sort out the chaos in its reporting system, a party official announced that turnout was ‘on pace’ with what they had seen in 2016.”

“In other words, it was mediocre. About 170,000 people participated in the 2016 Iowa Democratic caucuses, far short of the unprecedented 240,000 voters who turned out in 2008 and launched Barack Obama on his way to the White House. What was so exciting a dozen years ago was not only how many Iowans showed up, but who they were: young people, first-time caucusgoers, an ethnically diverse mix of voters in an overwhelmingly white state.”

0 comments on “The Campaign Report – On to New Hampshire”