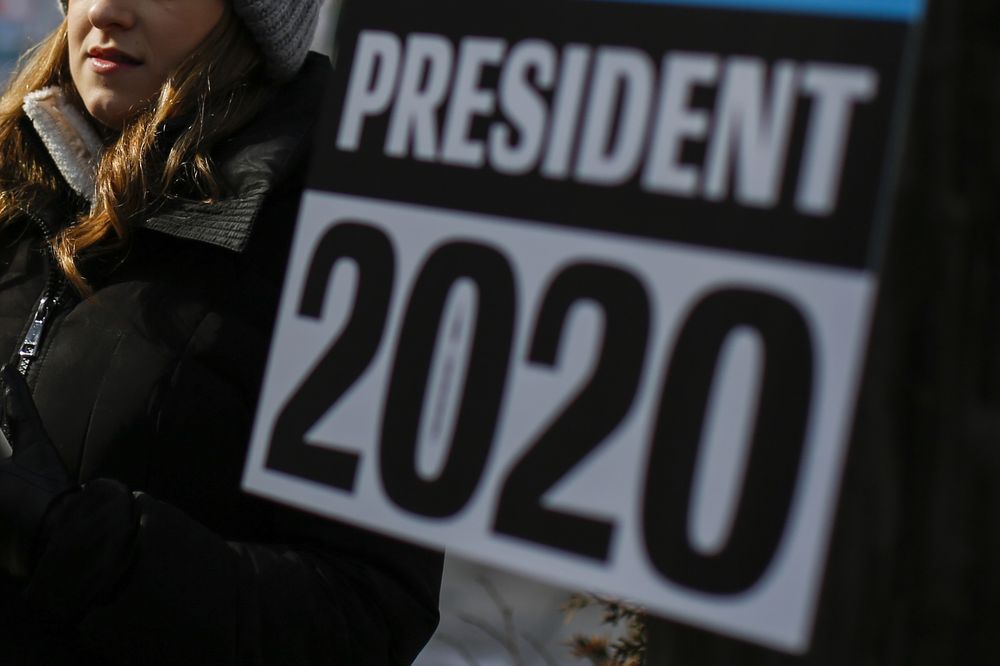 A new CBS News poll in Iowa finds Bernie Sanders and Joe Biden even in first-choice support at 25% each, Pete Buttigieg very close behind at 21%, and Elizabeth Warren at 16%, also in position to accrue some national delegates.

Amy Klobuchar is at 5%, and all other candidates are under 5%.

The final Emerson College/7 News Iowa poll finds Bernie Sanders with a solid lead going into Monday’s caucus with 28%, followed by Joe Biden follows with 21%, Pete Buttigieg at 15%, Elizabeth Warren at 14%, and Amy Klobuchar at 11%.

“Rival campaigns are sounding the alarm that Bernie Sanders could be planning to claim victory on Monday night — before the caucuses are concluded,” Politico reports.

“It’s a move, they say, that could have a significant effect on the outcome.”

“Sanders and his team have made clear their intention to tout the results of the first round of caucus voting Monday, even though the Iowa Democratic Party stresses that the only number that matters is the final delegate count.”

Jonathan Swan: “President Trump often says he’s the smartest person in the room on virtually every topic. Now, after taking several risks on what he privately calls ‘big shit’ and avoiding catastrophe, Trump and his entire inner circle convey supreme self-confidence, bordering on a sense of invincibility.”

“Three years into Trump’s presidency, their view is the naysayers are always wrong. They point to Iran, impeachment, Middle East peace. Every day, Trump grows more confident in his gut and less deterrable. Over the last month, 10 senior administration officials have described this sentiment to me. Most of them share it.”

“Biden’s team has long played down the importance of Iowa to its strategy, arguing that contests later in February in Nevada and South Carolina, followed quickly by Super Tuesday on March 3, are critical to demonstrate that a candidate is capable of defeating President Trump.”

President Trump was asked by Fox News what he thinks of Michael Bloomberg.

It was unclear what Trump was referencing in regards to Bloomberg requesting a box to stand on during an upcoming Democratic debate.

The Bloomberg campaign responded to NBC News: “The president is lying. He is a pathological liar who lies about everything: his fake hair, his obesity, and his spray-on tan.”

Former Secretary of State John Kerry — one of Joe Biden’s highest-profile endorsers — was overheard Sunday on the phone at a Des Moines hotel explaining what he would have to do to enter the presidential race amid “the possibility of Bernie Sanders taking down the Democratic Party — down whole,” NBC News reports.

Kerry was overheard saying “maybe I’m fucking deluding myself here” and explaining that in order to run, he’d have to step down from the board of Bank of America and give up his ability to make paid speeches.

Kerry added that donors like venture capitalist Doug Hickey would have to “raise a couple of million,” adding that such donors “now have the reality of Bernie.”

Yes, John, you are deluding yourself. Your time is over.

A new Wall Street Journal/NBC News poll finds a majority of voters — 52% — say they believe Trump abused the power of his office by asking a foreign government to investigate a political opponent to influence the upcoming election, compared with 41% who disagree.

And another majority of voters — 53% — believe the president obstructed Congress by not cooperating with the impeachment investigation and by directing government employees not to comply with subpoenas. Just 37% say he did not obstruct Congress.

“Nothing is more important to the Register and its polling partners than the integrity of the Iowa Poll. Today, a respondent raised an issue with the way the survey was administered, which could have compromised the results of the poll. It appears a candidate’s name was omitted in at least one interview in which the respondent was asked to name their preferred candidate.”

“While this appears to be isolated to one surveyor, we cannot confirm that with certainty. Therefore, the partners made the difficult decision to not to move forward with releasing the Iowa Poll.”

New York Times: “A reconstruction of the crucial seven weeks between the appearance of the first symptoms in early December and the government’s decision to lock down the city… points to decisions that delayed a concerted public health offensive.”

“In those weeks, the authorities silenced doctors and others for raising red flags. They played down the dangers to the public, leaving the city’s 11 million residents unaware they should protect themselves. They closed a food market where the virus was believed to have started, but didn’t broadly curb the wildlife trade…”

“It is now a global health emergency. It has triggered travel restrictions around the world, shaken financial markets and created perhaps the greatest challenge yet for China’s leader, Xi Jinping. The crisis could upend Mr. Xi’s agenda for months or longer, even undermining his vision of a political system that offers security and growth in return for submission to iron-fisted authoritarianism.”

“Pete Buttigieg’s campaign has done 50 town halls in the last five weeks statewide and he’s visited 25 of the 31 counties that went from Barack Obama in 2012 to Donald Trump in 2016 — but aides say he doesn’t have to win the caucuses to become the nominee,” Axios reports.

Said senior advisor Michael Halle: “In the first four states — but especially in Iowa and New Hampshire — we need to demonstrate that we are viable for Super Tuesday and for the larger primary.”

“The Iowa caucuses could feature an attack of the ‘zombie’ candidates,” the AP reports.

“As some Democrats prepare for Monday’s contest, they say they’re planning to side with candidates who have been out of the race for weeks, even months. By caucusing for Sens. Kamala Harris of California and Cory Booker of New Jersey, voters say they want to establish a record that those who bowed out early did indeed have supporters.”

“Such tactics reflect the unique and complicated nature of the caucuses.”

“Michael Bloomberg unveiled a plan on Saturday that would raise an estimated $5 trillion in new tax revenue from high earners and corporations, a proposal that would almost certainly raise his personal tax bill but is less aggressive than those from his most liberal rivals for the Democratic presidential nomination,” the New York Times reports.

“The proposal includes a repeal of President Trump’s 2017 tax cuts for high earners, along with a new 5 percent ‘surcharge’ on incomes above $5 million per year. It would raise capital gains taxes for Americans earning more than $1 million a year and maintain a limit on federal deductions of state and local tax payments set under the 2017 law, which some Democrats have pushed to eliminate.”

Wall Street Journal: “Bloomberg’s tax policies would place him in the middle of the pack of his rivals for the Democratic nomination.”

As the Senate impeachment trial goes into its third week, support for removing President Trump from office remains steady, with 50% of voters registering approval for his conviction despite his all-but-certain acquittal, according to the latest Politico/Morning Consult poll.