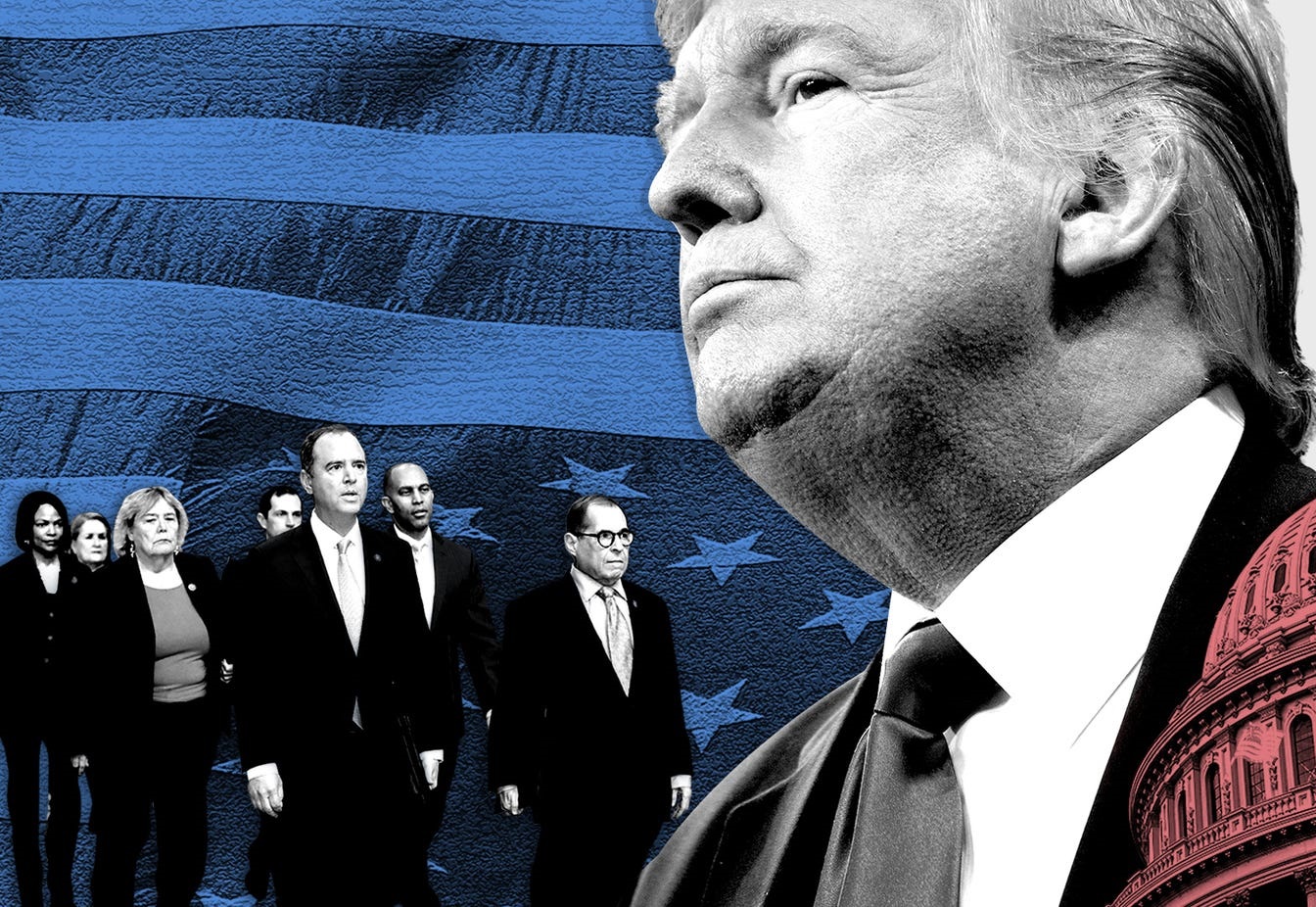 For what it’s worth, Sen. Susan Collins (R-ME) will vote in favor of calling new witnesses. It’s possible that Sens. Mitt Romney (R-UT) and Lisa Murkowski (R-AK) will join Collins, resulting in a 50-50 tie.

Axios: “The whip count is still fluid, but GOP senators are far more optimistic after yesterday’s eight-hour session than they were following their closed-door meeting on Tuesday. The Tuesday night meeting was strategically timed — and played exactly the role that Republican leaders had hoped it would.”

“Sources familiar with the meeting tell Axios that Senate Majority Leader Mitch McConnell told his conference that they did not yet have the votes to block witnesses, knowing that the news would likely leak to the media and alarm some senators who dread both a prolonged impeachment trial and Trump’s Twitter wrath.”

“In the end, the impeachment calculation nearly all Senate Republicans are making is fairly simple: They would rather look as if they ignored relevant evidence than plunge the Senate into an unpredictable, open-ended inquiry that would anger President Trump and court political peril,” the New York Times reports.

“As Republicans lined up on Wednesday behind blocking witnesses in the trial, their reasoning reflected the worry that allowing testimony by John R. Bolton, the former national security adviser whose unpublished manuscript contradicts a central part of Mr. Trump’s impeachment defense, would undoubtedly lead to a cascade of other witnesses. They in turn could provide more damaging disclosures and tie up the Senate indefinitely, when the ultimate verdict — an acquittal of the president — is not in doubt.”

Jonathan Bernstein: “The impeachment trial of President Trump moved to questions from senators on Wednesday. It wasn’t an encouraging day.”

“The president’s lawyers moved closer than ever to simply embracing the idea that the president can do whatever he wants. Alan Dershowitz even went so far as to argue that since presidents always think that their re-election is in the national interest, they cannot be legitimately impeached for any use of their powers of office to aid that re-election. This would have been good news for President Richard Nixon. And surprising news to pretty much everyone throughout U.S. history.”

“It appears more and more that even if the House managers serving as the impeachment prosecutors are eventually allowed to call one or more witnesses, the trial will end after establishing the principles that the president may use the powers of the office any way he or she wishes to without constraint, and that presidents will no longer have any legal obligation to submit to congressional oversight.”

“The U.S. economy grew at its slowest pace since 2016 last year, after posting a 2.1% advance in the fourth quarter,” the Wall Street Journal reports.

Commerce Secretary Wilbur Ross told Fox News the coronavirus — which has killed 170 in China and infected more than 7,700 people — “will help” to bring jobs to the United States because companies will be moving operations away from impacted areas.

Said Ross: “I think it will help to accelerate the return of jobs to North America, some to the U.S., probably some to Mexico as well.”

Alan Dershowitz, who is part of President Trump’s impeachment team, is trying to backtrack on an argument he made yesterday that anything a president does to win re-election can be seen “in the public interest.”

Dershowitz specifically claimed that CNN and MSNBC “distorted” his argument: “They characterized my argument as if I had said that if a president believes that his re-election was in the national interest, he can do anything. I said nothing like that, as anyone who actually heard what I said can attest.”

However, the video shows that Dershowitz said exactly that.

“Newly installed panels from the U.S. border wall fell over in high winds Wednesday, landing on trees on the Mexican side of the border,” CNN reports. “The area is part of an ongoing construction project to improve existing sections of the wall.”

Prosecutors have appeared to back away from their recommendation that former national security adviser Michael Flynn serve up to six months in prison, saying in court filings that probation remained a “reasonable sentence” that they would not oppose, the Washington Post reports.

“Democrats are casting a nervous eye on a small group of publicly undecided senators in their ranks as Republicans target a coveted prize in the Senate impeachment trial — a bipartisan acquittal of President Trump,” the Washington Post reports.

“Under the spotlight are two centrist mavericks who won election last year — Sens. Joe Manchin (D-WV) and Kyrsten Sinema (D-AZ) — as well as Sen. Doug Jones (D-AL), who will face voters this year after a long-shot win in a special election in 2017.”

“Chief Justice John Roberts has communicated to senators that he will not read aloud the alleged Ukraine whistleblower’s name or otherwise publicly relay questions that might out the official, a move that’s effectively blocked Sen. Rand Paul (R-KY) from asking a question,” Politico reports.

“In a behind-the-scenes fight, Paul has composed questions that violate Roberts’s edict, according to several Republicans familiar with the dynamics. It’s a vintage Rand Paul effort that’s annoying fellow Republicans and could come to a head on Thursday.”

Politico: “Sitting shoulder to shoulder on the Senate floor as they argue for the president’s removal from office, two men — Adam Schiff of California and Hakeem Jeffries of New York — have been catapulted to the front of the nation’s consciousness, to the top of the Democratic Party and have become the fulcrum for speculation about a host of prominent positions both in the House and beyond.”

“Schiff is said to be interested in the Senate (California Sen. Dianne Feinstein is 86), a spot in a potential Democratic administration or speaker of the House. Jeffries, meanwhile, has scant interest in running for mayor of New York — a job he was rumored to be eyeing. He wants to be House speaker — and is taking steps to get there.”

In an effort to rebuff arguments that calling witnesses would prolong the trial, Rep. Adam Schiff (D-CA), the lead House impeachment manager, suggested limiting the depositions of witnesses to one week, the New York Times reports.

Said Schiff: “Is that too much to ask in the name of fairness — that we follow the Clinton model, that we take one week? Are we really driven by the timing of the State of the Union, should that be a guiding principle? Can’t we take one week to hear from these witnesses?”

“The web of connections between Donald Trump’s convicted campaign manager and an indicted man who tried to dig up dirt on his political rival runs tighter and longer than previously understood,” the Daily Beastreports.

“Rudy Giuliani ally Igor Fruman and ex-Trump campaign chief Paul Manafort have been friendly for years… And that relationship — stretching from New York to London to Kyiv — long predated Rudy Giuliani’s wide-ranging attempts to discredit the evidence that played a key role in kicking off Manafort’s political downfall and eventual incarceration.”

“A Justice Department lawyer said Thursday in federal court that the House can impeach a president over ignored subpoenas, a noted contrast to what lawyers for President Trump are arguing at his Senate impeachment trial this week,” CNN reports.

“Asked by a federal judge what the House can do to enforce its subpoenas, Justice Department lawyer James Burnham said without hesitation that the House can use its impeachment powers, among other options, like withholding appropriations.”

Washington Post: “The attorneys general for the last three states to ratify the Equal Rights Amendment on Thursday filed a lawsuit in federal court arguing that the amendment must be added to the U.S. Constitution. The suit challenges a Justice Department memo earlier this month that said the national archivist, who certifies the ratification of amendments, should not do so because the congressional deadline for ratification expired in 1982.”