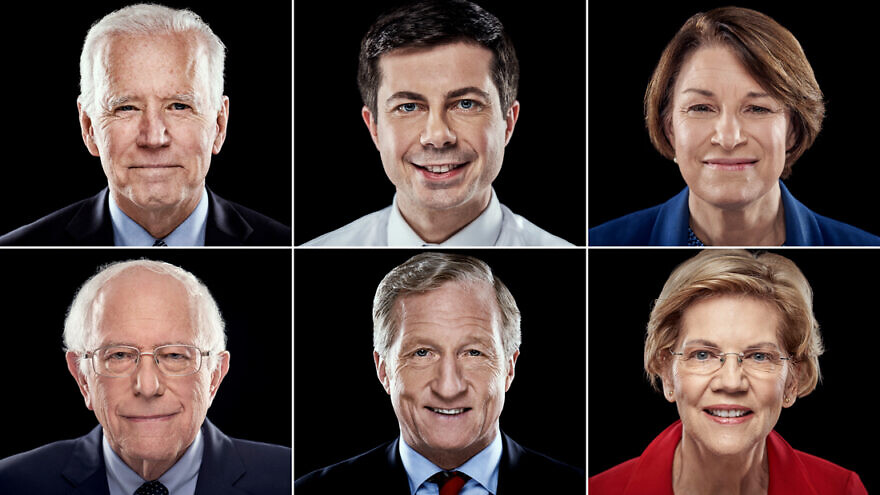 A new Pew Research national poll finds Joe Biden leads the Democratic presidential field with 26%, followed by Bernie Sanders at 21%, Elizabeth Warren at 16%, Pete Buttigieg at 7%, Michael Bloomberg at 5%, Andrew Yang at 3% and Amy Klobuchar at 2%.

Pew Research: “Ahead of the first contests in the 2020 election, Democratic voters are highly engaged with the race for their party’s nomination, express positive views of the Democratic field and are united in opposition to Donald Trump.”

“Yet many Democrats are uncertain if their party’s still-to-be-determined nominee can defeat Trump in the general election. Fewer than half (44%) expect victory for their party’s candidate this fall, while 34% decline to express an opinion and 22% think Trump will win. Republican voters, by contrast, are highly confident that Trump will win reelection (80% say he will probably or definitely win).”

“Joe Biden and other leading candidates are actively courting lower-polling campaigns in the final days before the Iowa caucuses, hoping to forge election night alliances designed to pick up the supporters of candidates who fail to move past the first ballot,” Politico reports.

“Biden’s campaign has approached at least two rival primary campaigns, seeking to broker agreements ahead of the Monday night’s caucuses, according to sources familiar with his overtures. And an aide to Tom Steyer said Wednesday that his campaign had been approached by ‘multiple candidates.’”

“After the dazzle and pop of Jennifer Lopez and Shakira’s Super Bowl halftime show this Sunday, Michael Bloomberg’s presidential campaign is hoping to ‘stop people in their tracks’ with an emotional ad featuring a mother who lost her son to gun violence,” the New York Times reports.

“In the minute-long ad, which the campaign released on Thursday, Calandrian Kemp tells the story of her son, George Kemp Jr., as the camera pans across childhood pictures of George in football gear. He was shot and killed in 2013 during an altercation while he was at college; he was 20.”

“Sen. Bernie Sanders is considering dozens of executive orders he could unilaterally enact on a wide range of domestic policy issues if elected president, including immigration, the environment and prescription drugs,” the Washington Post reports.

“The document reviewed by The Post shows how the Sanders campaign has already begun extensive planning for how the senator would lead the country in his first days as president if he won the Democratic nomination and defeated Trump in November. Many of the proposals Sanders has floated on the campaign trail do not have support from congressional Republicans and are opposed by some Democrats, so a willingness to move forward without congressional approval could determine whether many of his policies are enacted.”

Nate Silver: “As much as we try to remind you all about how uncertain elections can be — pleas that sometimes fall on deaf ears — it’s important to keep in mind in advance of the Iowa caucuses. To begin with, primaries are much harder to poll than general elections, and caucuses are even harder to poll than primaries, as they introduce a number of complications. Caucuses require a long time commitment, which can make turnout harder to predict. They aren’t a secret ballot, so voters can literally try to persuade their neighbors to change sides. And Iowa Democrats employ a viability check that asks voters to switch candidates if their first choice doesn’t clear a certain threshold, usually 15 percent of the vote at that caucus site. That makes second choices important, and even opens up the possibility of strategic alliances between the candidates.”

“So even though Bernie Sanders and Joe Biden are doing a bit better than other Democrats in Iowa polls, everyone would need a bit of luck to win the caucuses. Per our model, as of 8 p.m. Wednesday, Sanders had a 37% chance of winning the most votes — which is the best in the field. But it also means there’s a 63% chance he won’t win.”

A new AP-NORC poll finds 66% of Democrats report anxiety about the presidential election, compared with 46% of Republicans.

“Democrats are also more likely to feel frustration. Republicans, meanwhile, are more likely than Democrats to declare excitement about the race, and the share of enthusiastic Republicans appears to be rising.”

“The poll found that 43% of Republicans say they’re excited about the election, up 10 percentage points from October. Meanwhile, 33% of Democrats reported excitement.”

“The relationship between the company and the political left is at an all-time low, more than a dozen Democratic operatives, campaign officials and leaders of progressive groups said in interviews, following a series of company policy decisions widely seen among their ranks as favoring President Trump. Many Democrats and campaign officials are increasingly criticizing Chief Executive Mark Zuckerberg in personal terms.”

Meanwhile, The Hill reports Bloomberg will go up with three new television ads in 27 states this week.

New York Times: “Caucuses are low-turnout affairs, making grass-roots organizing an essential factor for doing well in Iowa. Well-tooled campaigns depend on a paid field staff and armies of volunteers to identify supporters, ensure they turn out and provide leadership in the many school cafeterias and churches that serve as caucus rooms. But according to nearly a dozen county Democratic chairs and Biden activists around the state, Mr. Biden’s ground game has weak spots that threaten him with underperforming his polling in Iowa, where he has consistently been at or near the top.”

“Joe Biden campaign has quietly rolled back hundreds of thousands of dollars of television ad reservations in New Hampshire and South Carolina in recent weeks and redirected the funds to buy more ads in Iowa instead,” the New York Times reports.

“Mr. Biden’s campaign and a super PAC supporting him are on pace to churn through nearly $9 million on television ads in Iowa ahead of the caucuses on Monday, while spending virtually nothing so far in the other three states that vote in February. Mr. Biden has also planted himself in the state this week, seizing on the Senate impeachment trial and President Trump’s rally in Des Moines on Thursday night to try to convince voters that Republicans are scared to run against him.”

Politico: “Sanders’ TV ads in the state remain centered on Medicare for All, a major focus of his campaign, as well as women’s rights and his movement. That’s a different approach than that of Joe Biden and Elizabeth Warren, who are making more explicit appeals to electability in the final sprint before Iowa.”

USA Today: “The spot – texted to Trump supporters by the campaign on Thursday – features a narrator and news reports discussing wage growth, job increases, and record low levels of unemployment for African-Americans and Hispanics. The commercial ends with Trump at one of his political rallies proclaiming: ‘And ladies and gentlemen, the best is yet to come.’”