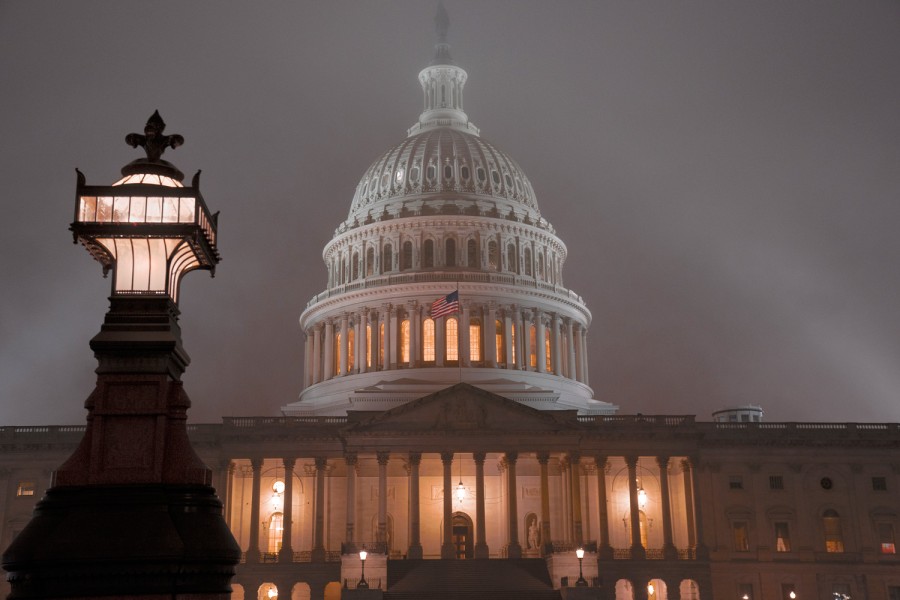 Senate Majority Leader Mitch McConnell (R-KY) privately told his caucus that he does not have the votes to block new witnesses or documents at President Trump’s impeachment trial, the Wall Street Journal reports.

He had a card with “yes,” “no,” and “maybes” marked on it, apparently a whip count, but he did not show it to senators.

“Sources close to Senate Majority Leader Mitch McConnell tell Axios that, if it appears that at least 51 senators will vote for witnesses, McConnell and Schumer will likely try to hash out an agreement rather than going straight to a vote.”

“If the Senate goes that route, Republicans are likely to demand their own list of witnesses — with Joe Biden’s son Hunter at the top.”

“This has privately created a dilemma for some Democrats, who are eager for more information but recognize that a vote for witnesses could open the door for Republicans to use the impeachment stage to try to deal an insurmountable blow to the campaign of a rival thought to pose the greatest risk to Trump in the general election.”

Sen. Lindsey Graham (R-SC) predicted that if the Senate opens the door to calling new witnesses, Republicans will vote to subpoena President Trump’s top targets, The Hill reports. Said Graham: “I’ll make a prediction: There will be 51 Republican votes to call Hunter Biden, Joe Biden, the whistleblower and the DNC staffer at a minimum.”

Sen. Lisa Murkowski (R-AK) hinted to Politico that she might support calling former National Security Adviser John Bolton as a witness in President Trump’s impeachment trial. Said Murkowski: “I think that Bolton probably has something to offer us so we’ll figure out how we’re going to learn more.”

According to several people who spoke to him, President Trump “has sounded resigned to the possibility of witnesses” at his impeachment trial in the Senate have grown, the New York Times reports.

Sen. Angus King (I-ME) told CNN that his prediction that up to 10 Republican senators would vote for witnesses in the impeachment trial was “a little naive.” Said King: “I think it’s going to be really close.”

“Just days ago, Republicans were optimistic President Trump’s defense team could cruise to an acquittal by the end of this week, but many believe his lawyers now face a steep climb to stop a vote to allow new witnesses and drag out the impeachment proceedings,” Axios reports.

“Republican senators and their aides are frustrated about the way the Bolton manuscript leaked, with some privately venting suspicions that White House Counsel Pat Cipollone must have known about its contours before a Saturday presentation on the Senate floor during which Trump’s defense team asserted there was ‘no evidence anywhere’ that Trump linked Ukraine aid to any investigations.”

“Secretary of State Mike Pompeo’s quarrel with NPR escalated on Monday after one of the radio network’s reporters was barred from flying on the secretary’s plane during an upcoming trip to Ukraine,” Politico reports.

“Sustained federal budget deficits and debt will hit the highest levels since World War II over the next decade, according to a Congressional Budget Office report,” the Wall Street Journal reports.

“The government will spend $1 trillion more than it collects in 2020 and deficits will exceed that amount every year for the foreseeable future. As a share of gross domestic product, the deficit will be at least 4.3% every year through 2030. That would be the longest stretch of budget deficits exceeding 4% of GDP over the past century.”

Joe Biden said Sen. Joni Ernst (R-IA) had “spilled the beans” after the Iowa Republican gleefully suggested that the Senate impeachment debate surrounding the former vice president could hinder his performance in her state’s first-in-the-nation caucuses next week, Politico reports.

Said Kelly: “If John Bolton says that in the book I believe John Bolton… John’s an honest guy. He’s a man of integrity and great character, so we’ll see what happens.”

He added: “I think some of the conversations seem to me to be very inappropriate but I wasn’t there. But there are people that were there that ought to be heard from.”

“A retired Navy SEAL whose war crimes trial made international news has launched a video attack on former SEAL teammates who accused him of murder, shooting civilians and who testified against him at his San Diego court-martial in June,” the San Diego Union Tribune reports.

“In a three-minute video posted to his Facebook page and Instagram account Monday, retired Chief Special Operator Edward Gallagher referred to some members of his former platoon as ‘cowards’ and highlighted names, photos and — for those still on active duty — their duty status and current units, something former SEALs say places those men — and the Navy’s mission — in jeopardy.”

“I can tell you what my testimony is: He’s guilty and he should be impeached.” — Rep. Adam Schiff, when asked if he would testify in the impeachment trial if called by Republican senators.

According to the Times, Bolton wrote that he had told Barr he was worried that President Donald Trump was granting personal favors for Chinese President Xi Jinping and Turkish President Recep Tayyip Erdogan, two authoritarian leaders whom Trump has often praised. Barr then reportedly expressed concern over how Trump’s friendliness with the two leaders gave the impression that he was exercising “undue influence,” in the Times’ words, on the DOJ’s probes into businesses in Turkey and China.

Department of Justice spokesperson Kerri Kupec claimed in a statement that while the DOJ has not read the manuscript, the Times had “grossly mischaracterized” the conversation between the two Trump officials. “There was no discussion of ‘personal favors’ or ‘undue influence’ on investigations, nor did Attorney General Barr state that the President’s conversations with foreign leaders was improper,” Kupec said.

The book will be published in March.

A new Pew research study finds that when it comes to news sources, Republicans tend to trust Fox News more than any other news source, while Democrats tend to trust a variety of news sources about equally. Their top choice is CNN, closely followed by NBC News, ABC News, CBS News and PBS.

When compared to a similar poll taken in 2014, the results suggests that “Republicans have grown increasingly alienated from most of the more established sources, while Democrats’ confidence in them remains stable, and in some cases, has strengthened.”

Playbook: “As you might’ve read here, the USMCA was the Trump administration’s top legislative priority, and to its credit, the White House steered it through a Congress beset by partisanship by partnering with House Democrats. And on Wednesday, the White House is hosting a big signing ceremony for the deal.”

“Of course, it is undeniable fact that Democrats played a big role in this deal — just ask the White House, which told reporters for months that the fate of the bill was in Speaker Nancy Pelosi’s hands. Her trade working group negotiated with USTR Robert Lighthizer — and earned plaudits from many in the administration for being honest brokers.”

“But now that it’s time to celebrate, Democrats are out in the cold. In a closed-door meeting Monday night, Pelosi briefly mentioned that President Trump would sign the trade deal this week, touting the provisions that Democrats helped get added. She mentioned the White House ceremony, and said, ‘not that Democrats were invited,’ according to multiple people in the room.”

Graeme Wood on why John Bolton has stayed silent: “Silence up to now has bought Bolton the Litigator something very valuable. He has now listened as others present ‘in the room’—including his deputies, such as Fiona Hill—have recorded their versions of events. He has heard Republicans, including Trump, lay out an impeachment defense—not only a version of events, but also a theory of innocence. By speaking last, he can present testimony precisely calculated to hurt those he most wants to embarrass.”

“Even just today, in response to the initial leaks from Bolton’s book, Trump tweeted a suspiciously grammatical series of statements demeaning Bolton and denying that Bolton was told to delay aid to Ukraine. Bolton is strategic, and it would be unlike him to make a bold claim without a plan to counter Trump’s denial. More likely, he will dole out the details and evidence methodically, thwarting his critics like steers in a cutting horse competition.”

“President Trump will release a long-awaited Middle East peace plan on Tuesday that is expected to include a proposal for new Israeli borders and provide for Israeli sovereignty over much of the Jordan Valley, a strategic area on the eastern frontier of the West Bank abutting Jordan,” the New York Times reports.

“Palestinian leaders, who no longer speak to Trump officials, are likely to oppose each of those elements, even if they are combined with the economic rewards of $50 billion or more that the Trump administration says it can deliver.”

Jerusalem Post: “The indictment’s filing could impact the March 2 election and alter the course of negotiations over forming a new government and who will be the new prime minister.”