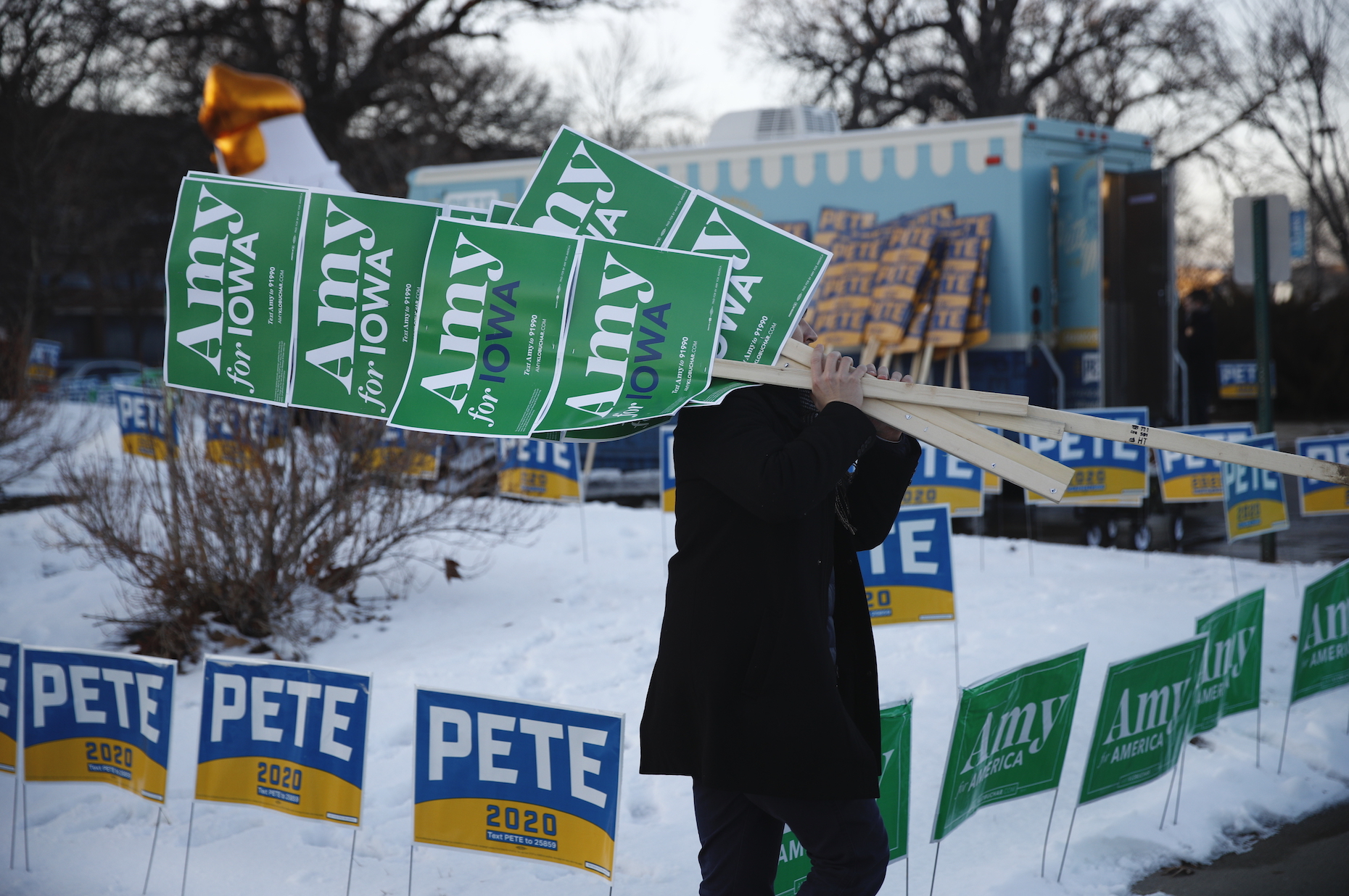 A new Monmouth poll in Iowa finds Joe Biden leading the Democratic presidential race with 23%, followed by Bernie Sanders at 21%, Pete Buttigieg at 16%, Elizabeth Warren at 15%, Amy Klobuchar at 10%, Tom Steyer at 4% and Andrew Yang at 3%.

But most interesting is that just 47% of likely caucusgoers say they are firmly decided on which candidate they will support.

Said pollster Patrick Murray: “Caucus electorates are the most difficult to model in polling. The smartest takeaway from this, or any Iowa poll for that matter, is to be prepared for anything on Monday.”

Also important: “The poll asked caucusgoers to name a candidate they have in mind as a second choice. When these are combined with initial preferences, Biden (39%), Warren (34%), Sanders (32%), and Buttigieg (29%) are bunched together. They are trailed by Klobuchar (22%), Steyer (10%), and Yang (7%) as either a first or second choice.”

A new St. Pete Polls survey in Florida finds Joe Biden leading the Democratic presidential race with 41%, followed by Michael Bloomberg at 17%, Bernie Sanders at 9%, Elizabeth Warren at 7%, Pete Buttigieg at 6% and Amy Klobuchar at 5%.

A new YouGov Blue poll showed that 47% of likely Democratic voters said they would support Joe Biden if a national race were held today, while 45% said they would back Elizabeth Warren.

If the primary were between Bernie Sanders and Biden, 53% said they would vote for Biden and 41% would get behind Sanders.

The Wall Street Journal has an excellent visual guide to the Iowa caucuses.

New York Times: “Michael Bloomberg, the former New York City mayor who entered the Democratic presidential primary late and has not qualified to participate in the debates, has moved to exploit his rivals’ failure to mount a more frontal attack on Mr. Trump’s record on health care. Driven by extensive polling, Mr. Bloomberg’s campaign has released a torrent of television and digital ads accusing Mr. Trump of trying to ‘undermine coverage’ for Americans with pre-existing conditions.”

“Since he announced his candidacy, Mr. Bloomberg has spent more than $88.2 million on television advertisements about health care in 27 states, according to Advertising Analytics, an ad tracking firm. About $66 million of those ads have attacked Mr. Trump on health care.”

“His campaign has spent $41.3 million airing one ad more than 46,000 times: It starts with a video clip of Mr. Trump saying ‘Let Obamacare implode.’”

“A group of DNC officials approved and then withheld from their own leadership a proposal to carve out a generous exit package for the party chairman, Tom Perez, and two top lieutenants, leaving Democrats confounded over the weekend by the optics and timing of the decision on the eve of the presidential primary,” BuzzFeed News reports.

“The proposal, put forward as an official DNC resolution during a meeting of the party’s budget and finance committee last Friday, would have arranged for Perez and two of his top deputies, CEO Seema Nanda and deputy CEO Sam Cornale, to each receive a lump-sum bonus equaling four months’ salary within two weeks of the time they eventually leave their roles.”

Not a good look, DNC. Not in the middle of an election year.

“Andrew Yang said he won’t be surprised if his voters end up supporting Bernie Sanders in later rounds of the Iowa caucus voting — a development that could strengthen Sanders’s already-surging campaign in the state,” Bloomberg reports.

The DNC is dropping “six figures” to acquire “tens of millions” of cellphone numbers through a variety of vendors, the Daily Beast reports.

“It’s plan is to boost Democratic voter outreach, fundraising, and data collection ahead of a bruising 2020 presidential campaign and the host of down-ballot races that will reshape American politics next year.”

Thomas Edsall: “If you attend an evangelical or a Catholic Church, a women’s rights march or a political rally of any kind, especially in a seriously contested state, the odds are that your cellphone ID number, home address, partisan affiliation and the identifying information of the people around you will be provided by geofencing marketers to campaigns, lobbyists and other interest groups.”

“With increasing speed, digital technology is transforming politics, constantly providing novel ways to target specific individuals, to get the unregistered registered, to turn out marginal voters, to persuade the undecided and to suppress support for the opposition.”

“Democrats and Republicans agree that the Trump campaign is far ahead of the Democratic Party in the use of this technology, capitalizing on its substantial investment during the 2016 election and benefiting from an uninterrupted high-tech drive since then.”

“Aides to Joe Biden are discussing the possibility of seeking an alliance with Sen. Amy Klobuchar in next week’s Iowa caucuses, a plan that would involve a pledge to help each other in precincts where one of them does not have enough support to win delegates,” the New York Times reports.

“Three staff members for Mr. Biden’s Iowa campaign tentatively floated the idea to a top Klobuchar adviser at a meeting this week, according to Democrats briefed on the meeting. People in both the Biden and Klobuchar camps played down the discussion, which took place at a Des Moines restaurant, and aides for Ms. Klobuchar said they did not regard it as a serious overture. But there is little doubt among Mr. Biden’s allies in the state that his campaign is contemplating such steps, with an eye toward preventing a messy split among moderate candidates on Monday.”

Sen. Amy Klobuchar’s (D-MN) presidential campaign dismissed a reported effort by 2020 rival Joe Biden’s team to form an alliance in the Iowa caucuses, The Hill reports. Said senior aide Tim Hogan: “Our campaign is on the rise. We’ve never made caucus deals with other campaigns and don’t intend to.”

Rep. Doug Collins (R-GA) launched a bid for U.S. Senate on Fox News, saying he’d center his campaign on support for President Trump as he dismissed concerns about opening a bitter Republican rift in Georgia, the Atlanta Journal Constitution reports.

Said Collins: “I’ve still got a lot of work left to do to help this president. We’re getting ready for a good time down here to keep defending this president and working for the people of Georgia.”

“The decision by the four-term congressman sets up a battle with Sen. Kelly Loeffler (R-GA), a wealthy Republican executive tapped by Gov. Brian Kemp (R) in December.”

“Allies of Donald Trump have begun holding events in black communities where organizers lavish praise on the president as they hand out tens of thousands of dollars to lucky attendees,” Politico reports.

“The first giveaway took place last month in Cleveland, where recipients whose winning tickets were drawn from a bin landed cash gifts in increments of several hundred dollars, stuffed into envelopes. A second giveaway scheduled for this month in Virginia has been postponed, and more are said to be in the works.”

“President Trump told his supporters at a raucous rally on Tuesday evening that Representative Jeff Van Drew of New Jersey, who recently left the Democratic Party, was a symbol of the future. Without evidence, he said that an increasing number of Americans were ‘disgusted’ by congressional Democrats who, he said, are ‘obsessed with demented hoaxes, this crazy witch hunt and deranged partisan crusades,’” the New York Times reports.

Said Trump: “They’ve spent the last three years and probably even before I came down on that beautiful escalator with our beautiful future first lady, trying to overthrow the last election, and we will make sure that they face another crushing defeat in the next election.”