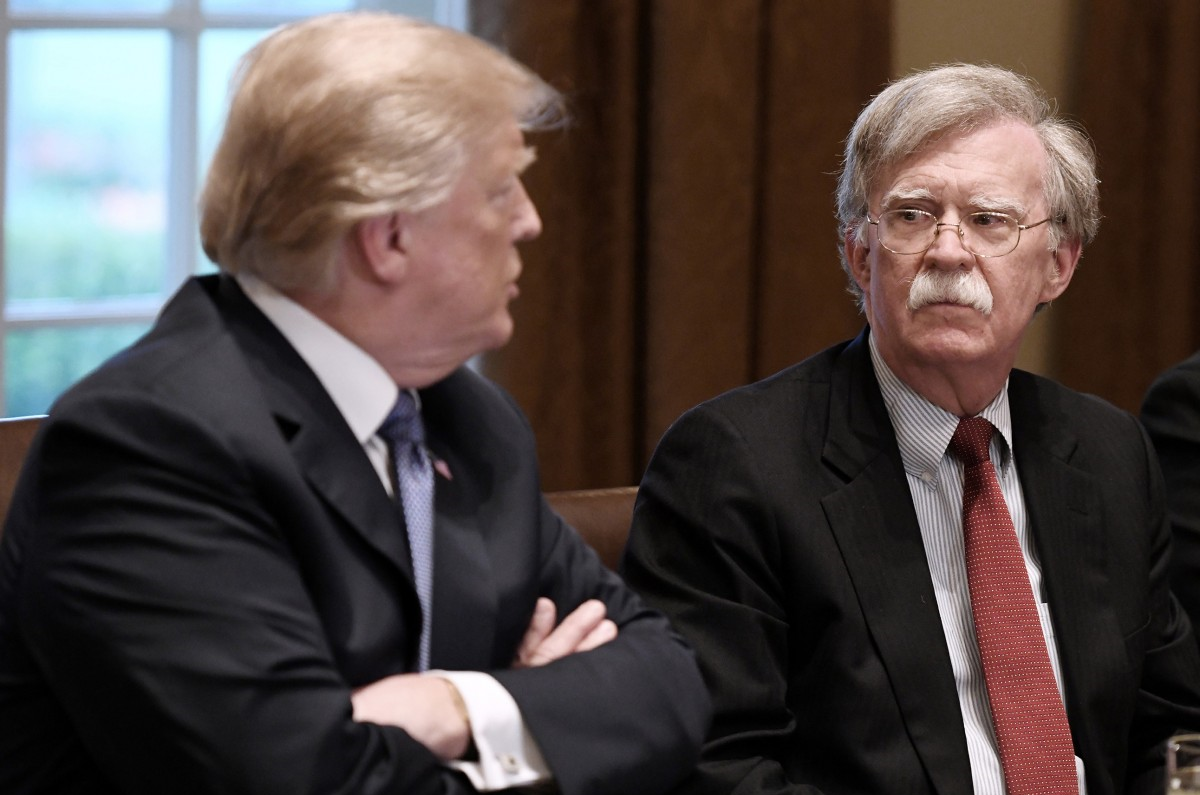 Some Republican senators are privately pushing the White House for information on who in the Trump administration had visibility into John Bolton’s book manuscript over the last month, the New York Times reports.

The senators “feel blindsided.” If they feel blindsided, then they are all fucking idiots. For the six weeks, everyone knew Bolton was going to write a book. Everyone knew he was no Trump syncophant. Everyone knew, from the American Oversight and Parnas email document dumps, that there was a ton of evidence confirming the Democratic case against Trump. Everyone was talking about the great risk McConnell and the Republicans were taking in doing an Impeachment trial with no witnesses because more revelations damaging to Trump WERE GUARANTEED to happen.

Playbook: “Here’s the dilemma for Republicans now: If you’re one of the Republicans who were already uncomfortable with this president, how do you vote to not call Bolton after seeing this? Remember: Bolton is publishing an entire book, and so far we know only what he’s said on Ukraine — not everything else he’s seen.”

“Senate Republicans were thrown off-balance Monday by the latest John Bolton revelations, offering a range of convoluted — and at times contradictory — responses to an episode that threatens to upend President Trump’s impeachment trial,” Politico reports.

“GOP senators, who hadn’t yet had time to coordinate their responses before arriving at the Capitol, offered an all-over-the-map assessment of the significance of the former national security adviser’s claim that Trump told him he would continue withholding military aid until Ukraine provided information about investigations he had been seeking into his Democratic rivals, including former Vice President Joe Biden.”

Playbook: “After a morning in the Capitol, here’s what we can say for sure: The NYT story about John Bolton’s manuscript has undoubtedly scrambled the impeachment proceedings, leaving the once cocksure Republican Party scratching their collective heads at what comes next. The body language and the rhetoric have changed — but to what end, we’re not certain at this moment.”

“Over the weekend, Republicans were quite sure that the impeachment trial of President Trump would be over by this weekend. Now there’s a distinct sense of confusion about when and how this will all end.”

“At the moment, Senate GOP leadership sources tell us they are still pushing against witnesses — but they acknowledge the situation is fluid, and say it could change.”

Republican sources tell Axios that party leaders and the White House will still try to resist witnesses because, as one top aide put it, “there is a sense in the Senate that if one witness is allowed, the floodgates are open.” Said one White House aide: “If Bolton says stuff that implicates, say Mick Mulvaney or Mike Pompeo, then calls for them will intensify.”

Sen. Susan Collins (R-ME) issued a statement: “The reports about John Bolton’s book strengthen the case for witnesses and have prompted a number of conversations among my colleagues.”

Sen. Mitt Romney (R-UT) to the Washington Post: “I think it’s increasingly likely that other Republicans will join those of us who think we should hear from John Bolton.”

Sen. Patrick Toomey (R-PA), an influential conservative in the Senate, has spoken with several colleagues in recent days about possibly summoning just two witnesses to President Trump’s impeachment trial, with one called by Republicans and one by Democrats, the Washington Postreports.

“Toomey has confided to GOP senators that proposing a ‘one-for-one’ deal with Senate Democrats may be necessary at some point, particularly with pressure mounting for witnesses to be called… He has argued that such an arrangement could force Democrats to accept a Republican witness against their wishes or else risk having Republicans move ahead to acquit Trump.”

Sen. Lisa Murkowski (R-AK) said she is “curious” to know what John Bolton might have to say about President Trump’s relations with Ukraine but stopped short of saying if she would support calling him to testify in the impeachment trial, The Hill reports. Said Murkowski: “Well I read it. I’ve said before I was curious what Ambassador Bolton might have to say and I’m still curious.”

Sen. Angus King (I-ME) told NPR that as many as 10 Republican senators would eventually vote in favor of allowing new witnesses during President Trump’s impeachment trial.

“President Trump’s team of lawyers did not change their tactics Monday despite bombshell new revelations related to former national security adviser John Bolton’s alleged knowledge about the Ukraine affair at the center of the president’s impeachment trial,” The Hill reports.

“In hours of arguments on the Senate floor, Trump’s attorneys did not address or seek to knock down Bolton’s account, as Trump himself has done.”

“Mr. Barr responded by pointing to a pair of Justice Department investigations of companies in those countries and said he was worried that Mr. Trump had created the appearance that he had undue influence over what would typically be independent inquiries…”

“Mr. Bolton’s account underscores the fact that the unease about Mr. Trump’s seeming embrace of authoritarian leaders, long expressed by experts and his opponents, also existed among some of the senior cabinet officers entrusted by the president to carry out his foreign policy and national security agendas.”

Former U.S. Ambassador to Ukraine William Taylor responds in the New York Times to Secretary of State Mike Pompeo’s sarcastic question in private to an NPR reporter: “Do you think Americans care about Ukraine?”

Windsor Mann: “No one scares President Trump as much as people who used to work for him. They know the truth about him, and some of them tell it. When they do, Trump denies it and smears them.”

“It’s amazing how many people have turned on Trump in just his first term. He is a man who prizes loyalty above all else, and yet one toady after another has betrayed him.”

“The National Security Council denied Monday that any White House personnel outside of its purview had seen the manuscript of former national security adviser John Bolton’s book that was submitted to the White House for review,” Axios reports.

“Given that White House counsel Pat Cipollone is not part of the NSC, this statement appears to double as an on-the-record denial that anyone on President Trump’s impeachment defense team reviewed Bolton’s manuscript.”

“The Supreme Court allowed a Trump administration rule denying green cards to legal immigrants who use or are likely to use public aid, as litigation continues,” the Wall Street Journal reports.

Washington Post: “The rules establish new criteria for who can be considered to be dependent on the U.S. government for benefits — ‘public charges,’ in the words of the law — and thus ineligible for green cards and a path to U.S. citizenship.”

Steve Pearlstein: “In the modern era, there are few if any examples of a country with a healthy, thriving economy and a broken political system. What distinguishes a successful economy from a failing one — what distinguishes Denmark from Italy and South Korea from North — is not how much capital it has or technology it produces but the quality of its institutions — the laws, rules, norms and policies that create the framework in which any economy operates. And there should be no doubt that as a result of broken politics, the quality of the United States’ institutions is already on the decline.”

I don’t advise holding your breath for all the Republican apologies to Adam Schiff now that it appears the CBS story he mentioned in his speech about heads on pikes has been proven true.

Laurence Tribe: “A horrible connection if it pans out: On Dec. 30, Trump learned what Bolton’s book would say. Bolton has been pushing war with Iran for years. Iran’s General Soleimani was in U.S. sights for years. Trump suddenly ordered his assassination on Jan. 3, four days after seeing the book.”

Aaron Blake: “The nightmare scenario for the GOP is that they give Trump the quick and witness-free acquittal that he apparently desires, but then information like Bolton’s keeps coming out. Bolton now suggests Trump was indeed telling people privately that the withheld military aid was part of a quid pro quo — a quid pro quo which European Union Ambassador Gordon Sondland testified that he communicated to the Ukrainians. This is something Trump’s team has strenuously denied, including at the impeachment trial. What if Bolton isn’t the only person Trump told this to who might suddenly contradict them?”

“However closely this has already been tied to Trump, it can always be tied more closely. Bolton’s upcoming book is a great example of how the hastily assembled walls the Trump team have built around its defense can quickly crumble — and in some cases already have.”

Said Trump: “The Democrat controlled House never even asked John Bolton to testify. It is up to them, not up to the Senate!”

The House Intelligence Committee did ask Bolton to testify, but he declined to testify on instructions from the White House.

Sen. Lindsey Graham (R-SC) told McClatchy that he might be open to calling for John Bolton to testify in President Trump’s impeachment trial, but added that he’ll also push to hear from other witnesses, including Joe and Hunter Biden and the anonymous whistleblower.