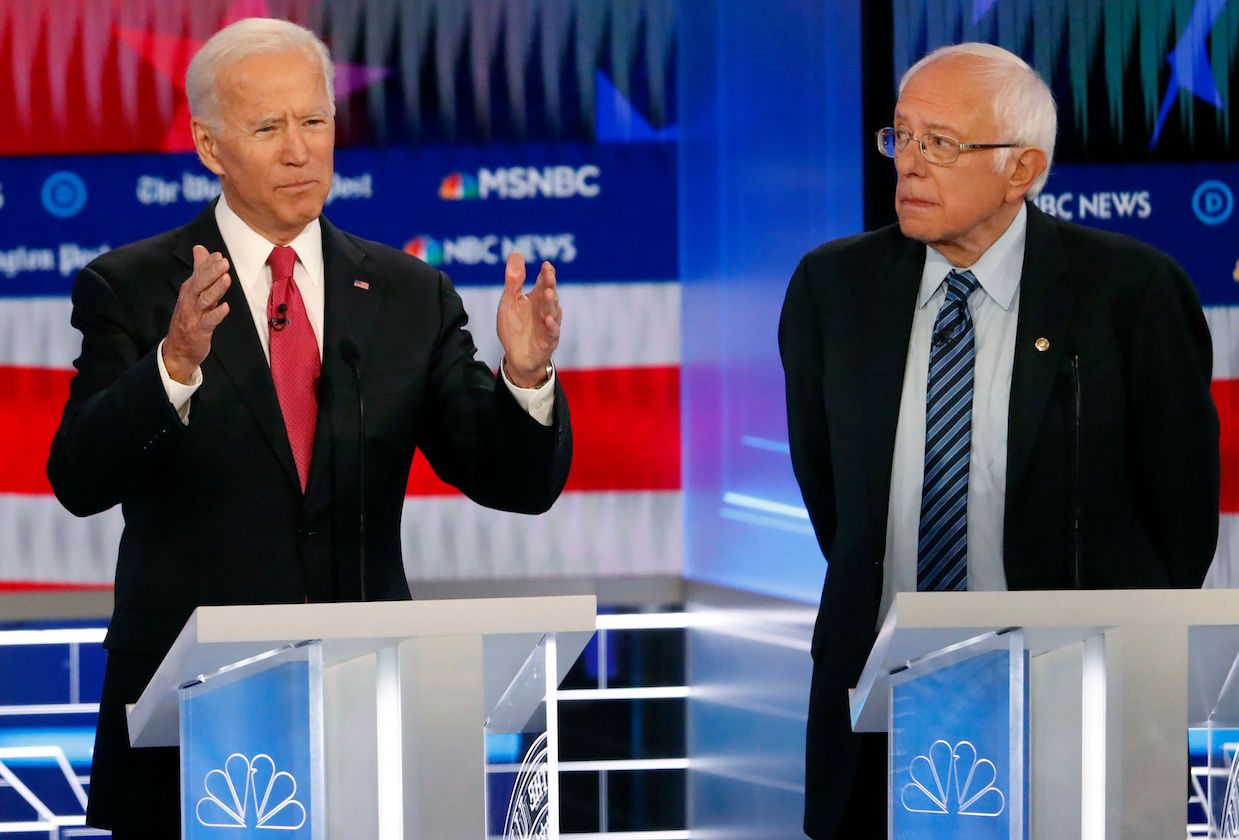 They are followed by Tom Steyer and Tulsi Gabbard both at 5%.

BuzzFeed News: “With the series of polls showing Sanders at the top of the field in the first states — two more came out on Sunday alone, along with a national poll that has Sanders and Biden nearly tied — there is a feeling of palpable anticipation inside and around the campaign over what backlash, if any, might be coming.”

“Some rivals are already trying to capitalize on establishment anxiety. Pete Buttigieg asked supporters twice on Saturday to fend off Sanders by contributing to the mayor’s campaign.”

Said Sanders at a rally: “We are taking on the Democratic establishment, and all across the country, let me tell you that the big money interests are getting very nervous. They’re looking at recent polls in New Hampshire and in Iowa and they’re saying ‘Oh my god, Sanders can win!’”

A new Salt Lake Tribune/Suffolk University survey in Utah shows Bernie Sanders leading the Democratic presidential field with 27%, followed by Elizabeth Warren at 14%, Joe Biden at 12% and Michael Bloomberg at 10%.

No other Democratic presidential candidate had double-digit support.

“The campaign’s move pays unprecedented attention on parts of the country that normally get neglected during the Democratic primary process, especially this early on.”

Said Richter: “When I decided to run for Congress, it was to flip a congressional seat. That’s already happened. I’m endorsing Jeff Van Drew.”

Wall Street Journal: “For the Feb. 3 caucuses, the Trump campaign is planning an ambitious show of force around the state, with over 80 surrogates expected to campaign at caucus locations.”

“The campaign sees the night as an opportunity to test its organizational muscle across the state’s 99 counties.”

Washington Post: “That ‘year of organizing’ will have its ultimate test in one week. And it has been almost microscopic. The campaign made a detailed study of almost all of the state’s more than 1,600 precincts to determine how to maximize support. It divided Iowa into nine zones and made an early investment deploying numerous operatives in each one, including remote towns and areas unlikely to support Warren.”

Michael Bloomberg writes in the Orlando Sentinel: “I’ll state it clearly: I support statehood for Puerto Rico. And as president, I will work to pass a bill making it a reality, subject to approval by the people of Puerto Rico — who will make the ultimate decision…”

“We believe taking Puerto Rican voters seriously starts in the Democratic primary, and that’s why I’m opening up an office in San Juan and building a ground operation — because the best way to stop Puerto Rico from being ignored in the future is to stop ignoring it right now.”

Rep. Seth Moulton (D-MA.) endorsed Joe Biden for the Democratic Party’s nomination for president, citing what he said was the former vice president’s ability to build a coalition within the party and proven foreign-policy credentials, the Wall Street Journal reports.

Nate Cohn: “On the one hand, many regular voters don’t participate in caucuses. One-third of people who participated in a recent Iowa Democratic primary — usually considered all but certain voters — said they weren’t likely to caucus, and these voters backed Mr. Biden by 11 points in the Times/Siena poll. The large number of Democratic primary voters who seem uninterested in attending the Iowa caucuses is all the more surprising given that recent Iowa primary elections for Senate, House, governor or local offices were not particularly competitive and certainly did not attract national attention.”

“On the other hand, a presidential caucus — and perhaps especially Bernie Sanders — draws a large number of voters to the polls who do not vote regularly. As a result, it was Mr. Sanders who led the Times/Siena poll — by seven points — despite weakness among regular and consistent voters. His supporters may not vote so often, but he led among those who said they had caucused before, including in 2016. Most important, he led among those who said they would show up next week, and therefore led the poll.”

After the most recent set of polls this weekend, Michael Bloomberg has now surpassed Pete Buttigieg in the RealClearPolitics national polling average and is now running fourth behind Joe Biden, Bernie Sanders and Elizabeth Warren.

Pete Buttigieg is out with a closing television ad in Iowa that will air statewide through caucus night, just one week from today.

Washington Post-ABC News poll: “With just over nine months until Election Day, Americans see Trump as a slight favorite for reelection, with 49% expecting him to win and 43% predicting that his Democratic challenger will prevail.”