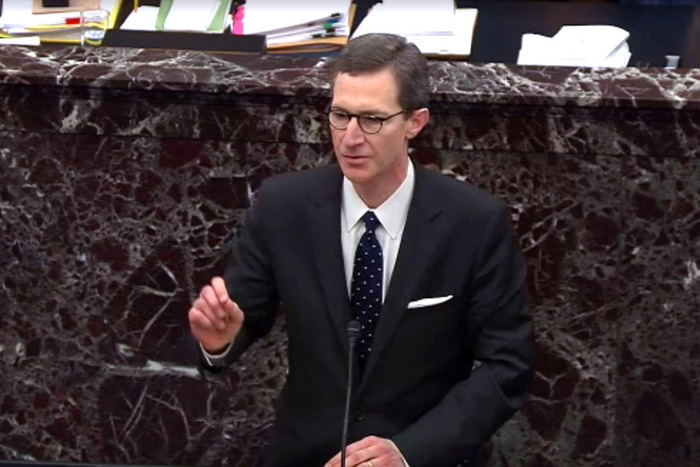 The Trump Defense team, such as it is, began their presentation today, and they only took two hours Saturday to present their case. They will also be making their arguments in defense of the Impeached One on Monday. White House counsel Pat Cipollone and his deputies Patrick Philbin and Michael Purpura and private attorney Jay Sekulow did not, as some observers suspected, dwell obsessively on Hunter and Joe Biden and their made up corrupt activities. They did meet expectations by insisting repeatedly that “the president did nothing wrong,” and by attacking House Democrats — and particularly lead impeachment manager Adam Schiff — for pursuing impeachment in the first place.

Cipollone led off by stressing the consequences of removing Trump from office, which of course he characterized as overturning the 2016 election (even though last I checked Vice President Pence was still a Republican). But the defense’s central argument, though, was that House Democrats in their rush to take down Trump had consistently put words in Trumps’ mouth. That’s why Purpura began his part of the argument by showing video of Schiff’s infamous parody gloss on Trump’s key July 25 conversation with Volodymyr Zelensky as resembling a mobster’s threats. Throughout the presentation, Team Trump continued to contrast Democratic characterizations of that call with the “transcript” (not actually a transcript, but a memo on the call) the White House released.

The Washington Post: “Senate Minority Leader Chuck Schumer said the Trump defense team “did something they did not intend” by making the case for more witnesses and documents. [He] focused on the defense team’s argument that there were no eyewitnesses and that no one knows what the president intended when he held the aid.

“But there are people who do know,” Schumer said, mentioning that former national security adviser John Bolton and acting White House chief of staff Mick Mulvaney were among them.

“Today we thank the president’s counsel for one thing, they made our case even stronger.”

The lawyer representing Lev Parnas has released a 2018 recording on which President Trump tells him and other associates to “get rid of” then-U.S. ambassador to Ukraine Maria Yovanovitch. On Friday, ABC News reported on the contents of the tape, which Parnas’s lawyer, Joseph Bondy, has given to the House Intelligence Committee and federal prosecutors in New York’s Southern District. On Saturday — after Trump’s lawyers finished their first day of defense in the president’s impeachment trial — Bondy released the full tape to the media.

“Given its importance to the national interest, we decided to release this recording in a manner intended to ensure equal public access, and in an effort to provide clarity to the American people and the Senate as to the need to conduct a fair trial, with witnesses and evidence,” Bondy said in a statement.

The hour-long recording captures part of a private April 30, 2018 dinner where Trump, Parnas, and Parnas’s then-business partner, Igor Fruman discussed Ukraine. Parnas and Fruman worked for Trump and his personal attorney, Rudy Giuliani, as backchannel operatives in Ukraine, where the group was trying to dig up politically damaging dirt on the Biden family. In the recording, Parnas and Fruman can be heard telling Trump that Ambassador Yovanovich needs to be removed, and claiming that she has been criticizing him.

The comments come 42 minutes into the video, at which point the participants can only be heard, not seen.

Sen. Mitt Romney told CNN that it’s “very likely” that he’ll be in favor of calling witnesses in the impeachment trial of President Trump, but won’t decide until after opening arguments.

“President Trump and White House officials are looking for at least one Senate Democrat to vote against removing the president from office at the end of his impeachment trial and they see Joe Manchin as the most likely candidate,” the Washington Post reports.

“Trump took particular pride that three House Democrats voted against his impeachment, White House officials said, and he would like to be able to get at least one Senate Democrat to vote for his acquittal so he can claim the decision was bipartisan.”

Playbook: “We anticipate the Trump defense will last today and Monday. Then Senate questions are Tuesday and Wednesday — Dems are expected to use this time, in part, to rebut the Trump defense. The debate on witnesses will probably be Thursday — probably a vote on witnesses, as well. If there are no witnesses, we’d guess they’ll close Friday, and deliberate into Saturday. Vote could come next Saturday or Monday.” “If there are witnesses, this whole timeline is blown up, and the process will continue for weeks.”

Washington Post: “Pouring attention on regional talk-radio hosts is a classic Trumpworld move: giving relatively unknown characters proximity to the White House has paid off with a disproportionate amount of attention and praise lavished on the president and his agenda.”

“Senior Trump campaign officials lobbied the nonpartisan presidential debate commission last month over the makeup of its board of directors and its moderator choices, pushing for a process they deemed as ‘fair’ and warning that the president may not participate if he is not satisfied,” the Washington Post reports.

Sen. Elizabeth Warren (D-MA) vowed that if elected president she would release the documents related to Trump’s conduct toward Ukraine that his administration declined to share with House investigators, the Washington Post reports.

Said Warren: “This is what I promise: When I’m president of the United States, on the first day, I’m going to release every document, I’m going to order the release of every document that the Trump administration is trying to hide. The American people have a right to see it.”

Associated Press: “Over the past eight months, the United States has poured more than 20,000 additional troops into the Middle East to counter the escalating threat from Iran that peaked with the recent missile attack on American forces in Iraq.”

“Despite President Trump’s pledge to bring troops home, the top U.S. commander in the Middle East on Thursday said the most recent forces to enter the region could be there for ‘quite a while.’”

Washington Post: “They are the most closely watched senators of President Trump’s impeachment trial — the moderate Republicans who might vote with Democrats to call new witnesses and subpoena unseen documents. But, a week into the trial, they are also oddly isolated.”

“Trump has kept his distance after White House advisers warned him that outreach would not help his cause. Democrats say there is no serious effort to privately lobby the Republicans, with the party relying instead on public opinion and the House prosecutors to squeeze them into breaking ranks.”

Three weeks before Rep. Jeff Van Drew (R-NJ) cemented his defection to the Republican Party with a pledge of “undying support” for President Trump, he sent a constituent a very different message, the Philadelphia Inquirer reports.

From the voicemail: “I haven’t voted for him, I didn’t support him, I will not vote for him.”

“The emergence of the voicemail comes just days before Van Drew is set to fly with Trump on Air Force One to a rally… which Van Drew hopes will help gin up support for him in the Republican primary.”