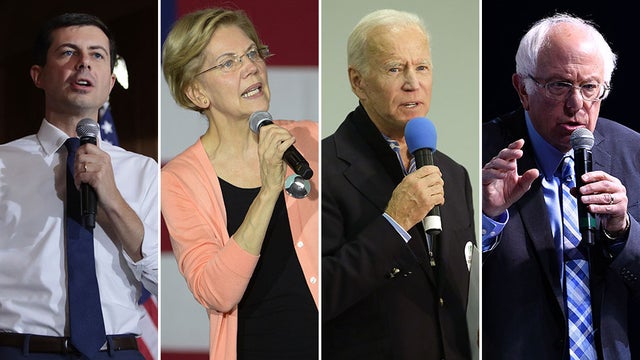 A new CBS News poll in Iowa shows Bernie Sanders is leading the Democratic presidential race with 26%, followed by Joe Biden at 25%, Pete Buttigieg at 22%, Elizabeth Warren at 15% and Amy Klobuchar at 7%.

Key takeaway: “Party rules make 15% the typical cutoff for awarding delegates, and supporters can shift to other candidates if they don’t reach this threshold. So, it’s critical to look at voters’ second choices and who else they’re considering, too.”

“Joe Biden could get a boost from his status as the second choice of those backing Amy Klobuchar, as well as from those polling lower… Meanwhile, Warren is right on the line, and her backers’ second choice is Sanders, more so than Biden or Buttigieg. That would mean Sanders could stand to pick up even more delegates if Warren backers don’t make the cut in some places. If Warren holds at her current level or gains, this race will remain tight.”

A new New York Times/Siena poll in Iowa finds Bernie Sanders leading the Democratic field with 25%, followed by Pete Buttigieg at 18%, Joe Biden at 17%, Elizabeth Warren at 15% and Amy Klobuchar at 8%.

“Should he prevail in Iowa and face a similarly fractured field of mainstream rivals in New Hampshire, where he also currently leads in the polls, Mr. Sanders could be difficult to slow.”

However, this is a key takeaway: “Ms. Klobuchar’s supporters could play the most crucial role, though, should she fail to achieve 15% in most precincts. When voters were asked whom they would support if they were left with only four choices — Mr. Sanders, Mr. Buttigieg, Mr. Biden and Ms. Warren — Mr. Biden was the overwhelming favorite of Ms. Klobuchar’s backers.”

A Washington Post-ABC News national poll finds former vice president Joe Biden leading with 32% and Bernie Sanders coming in second at 23%. Elizabeth Warren, the only other Democratic presidential candidate in double digits nationally, is at 12%, down significantly from 23% in October.

A new Fox News poll finds Joe Biden leading nationally with 26% support among Democratic primary voters and Bernie Sanders 23%.  They are followed by Elizabeth Warren at 14%, Mike Bloomberg at 10%, Pete Buttigieg at 7%, Andrew Yang at 5%, and Amy Klobuchar and Tom Steyer are at 3% apiece.

A new NBC News/Marist poll in New Hampshire shows Bernie Sanders leading the Democratic presidential race with 22%, followed by Pete Buttigieg at 17%, Joe Biden at 15%, Elizabeth Warren at 13%, and Amy Klobuchar at 10%.

A new CNN poll in New Hampshire finds Bernie Sanders leading the Democratic presidential race with 25%, followed by Joe Biden at 16%, Pete Buttigieg at 15% and Elizabeth Warren at 12%%. They are followed by Amy Klobuchar at 6%, Tulsi Gabbard at 5% and Andrew Yang at 5%.

The Des Moines Register endorsed Sen. Elizabeth Warren in the Iowa caucuses, calling her “the best leader for these times.”

Walter Shapiro: “And while I don’t want to over-hype newspapers in 2020, Warren has the organization to get the most mileage out of the Register’s nod. This is a bit of a boost for her.”

FiveThirtyEight: “Warren’s odds of winning Iowa are a bit lower than other candidates in our forecast — she’s only got about a 1 in 9 shot compared to Biden and Sanders’s 1 in 3 shot, but she’s also not that far behind (Buttigieg has a 1 in 4 chance). The good news for Warren is that the Des Moines Register’s endorsement has historically given its recipient a boost in the polls — though we should be careful not to overstate its importance.”

A video shows Warren learning she won the endorsement of Iowa’s biggest newspaper.

A new Fox News poll found that 50% of Americans think that the Senate should vote to convict and remove Trump, while 44% say the upper chamber should not vote to remove the president.

However, Trump’s approval rating hit a new high of 91% among Republicans in the survey.

Chicago Mayor Lori Lightfoot (D) told The Hill that she is considering throwing her support behind Michael Bloomberg for president.

After failing to qualify for a debate in Iowa earlier this month, Andrew Yang has earned a spot at the next Democratic primary debate, in New Hampshire on February 7, Politico reports.

“If there is to be any realistic challenge to Trump in November, the Democratic nominee needs to have a proven and substantial record of accomplishment across party lines, an ability to unite rather than divide, and the strength and stamina to go toe-to-toe with the Tweeter-in-Chief.”

“That would be U.S. Sen. Amy Klobuchar of Minnesota. She is sharp and witty, with a commanding understanding of both history and the inner workings of Capitol Hill.”

A new Washington Post-ABC News poll finds President Trump’s approval rating has climbed to match the highest of his presidency, 44% to 51%.

Key takeaway: A 56% majority approves of Trump’s handling of the economy, up 10 percentage points from September and his strongest rating on his marquee issue since entering office.

“The findings suggest the country’s strong economy and heightened support from men and independents are helping Trump weather an impeachment trial in which Democrats have argued Trump abused his presidential powers and obstructed a congressional investigation of his actions.”

Walter Shapiro: “Biden is drawing significantly smaller Iowa crowds than Pete Buttigieg, Bernie Sanders, or Elizabeth Warren. In fact, Biden may have played to more packed rooms in the run-up to the 2008 caucuses in which he limped home with an embarrassingly weak fifth-place finish.”

“Crowd size is often over-hyped in politics (see Trump, Donald), but turnout at candidate events matters in Iowa and New Hampshire. A significant fraction of early-state voters go out of their way to see candidates in person.”

“Biden supporters would argue that turnout at town meetings represents a flawed gauge since Iowa voters know him so well. But Sanders is also a familiar political figure—he is even recycling many of the same lines he used on the campaign trail in 2016—and yet he still draws huge crowds. His familiarity hasn’t dampened the enthusiasm for his candidacy.”

“Freed momentarily from the Senate’s impeachment trial, several presidential candidates high-tailed it to Iowa on Saturday for a last-minute blitz of campaigning before the state’s caucuses kick off the battle for the Democratic nomination,” the AP reports.

“The burst of campaigning comes as the contest for the Democratic nomination enters a critical — and volatile — phase.”

Politico: “Rufus Gifford, one of the Democratic Party’s best-connected fundraisers, is throwing his support behind Joe Biden in the 2020 presidential race, just before Biden and his rivals dive into an expensive stretch of early primaries and caucuses.”

“There are few Democratic donors or operatives with fundraising networks as vast as Gifford’s, and his connections could help Biden compete with fellow frontrunners who have tapped online small-dollar donors to outraise the former vice president so far. Gifford served as the finance director for former President Barack Obama’s reelection campaign, leading the record-setting push to raise $1 billion to win a second term for Obama in 2012.”

“Axne’s is the latest in a string of high-profile endorsements for the former vice president among Iowa’s current and former elected Democratic leaders. Two former governors — Chet Culver and Tom Vilsack — have endorsed Biden, as has U.S. Rep. Abby Finkenauer.”

Wall Street Journal: “Several of the leading Democratic candidates are girding for a long fight for the presidential nomination by making a series of bets on states that will be part of a slate of Super Tuesday contests and other primaries scheduled for March, when nearly two-thirds of the delegates to the party’s July convention will be awarded.”

“Even as the candidates are seeking a boost in Iowa, which holds its caucuses Feb. 3, and in New Hampshire, which will have the nation’s first primary Feb. 11, the front-loaded nature of the 2020 primary map is forcing campaigns to make decisions early about which states to target after the first round of Democratic voting wraps up in Nevada and South Carolina by late February.”